So, I hurried to Baidu took a look at this company called “Beauty Beauty”, one When I went to the official website, I was taken aback by its partner brands: 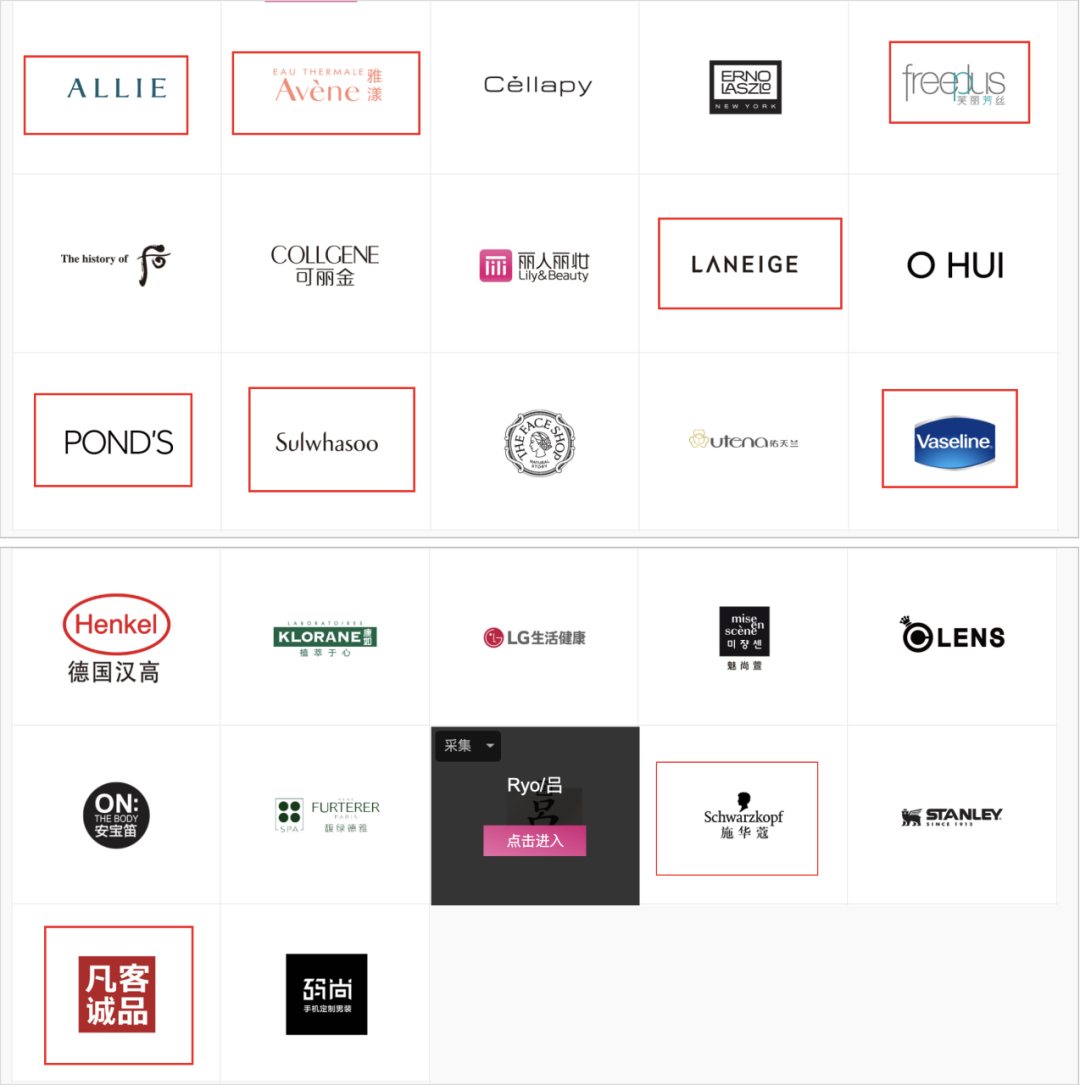 It turns out that this is an agency operating company. Schwarzkopf and Laneige are the cooperative brands of their companies.

However, it stands to reason that even if it is an agency operation, the operating company should only sell it, not send it, and the delivery is generally done by the brand. I won’t buy fake ones…

After continuing to understand, I found that this company not only earned 4 billion yuan a year, but also ranked first in the industry. It also went public at the end of September. 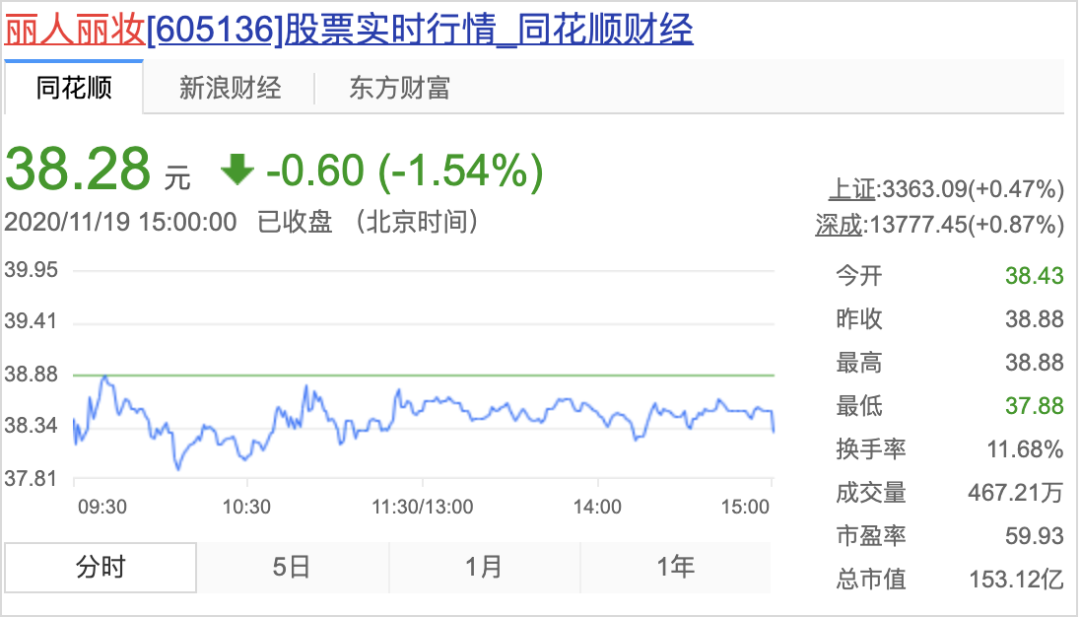 Not only that, it is also recognized by Ali’s father and holds more than 20% of the shares. It is not an exaggeration to say that it is Ali’s “godson”.

Huh, such an awesome company, I didn’t even know before? After taking a good look, I found that this company really has something.

What kind of company is Liren Lizhuang? Why are so many big names willing to cooperate with it?

It can be said that a beauty and makeup is equivalent to: an advertising public relations company + a customer service company + a logistics company, which is a highly integrated e-commerce chain.

1) “Dealer model” is operated on behalf of, and “united front” with the brand side

The so-called “e-commerce agency operation” refers to the brand outsourcing the management rights of the e-commerce platform to a company, so that it is fully responsible for the brand’s e-commerce affairs.

Generally speaking, this kind of e-commerce agency operation adopts the “commission model”, “I will help you Sell the goods, you will ship the goods”, the general process is like this: 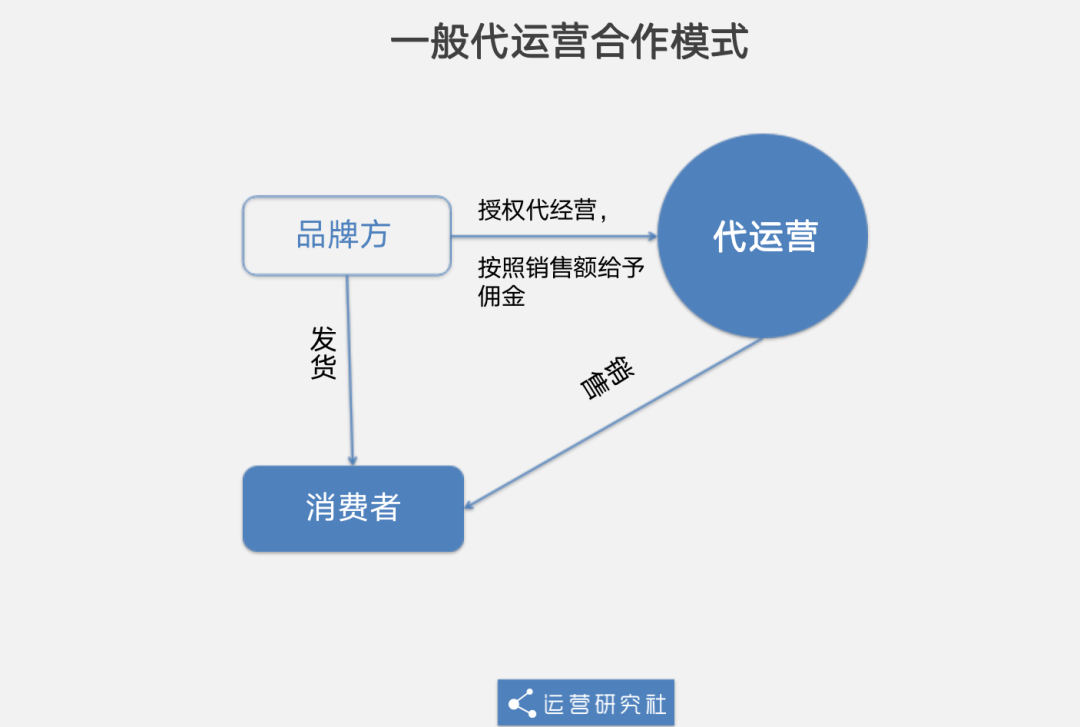 This traditionalIn the model of “I help you sell goods, you deliver goods”, the interests of the brand and the operator actually conflict:

The brand side does not want to do too many high-discount actions, because it will affect the brand image and overall profit;

In contrast, the current model of beauty and makeup is a rare model that unifies the benefits of the brand and agency operations-the “dealer model”.

This model first needs to pay for it by itself, purchase goods from the brand side/brand domestic general agent in a “buyout” manner, and then sell it through e-commerce channels, making money by earning the difference between the purchase price and the selling price. 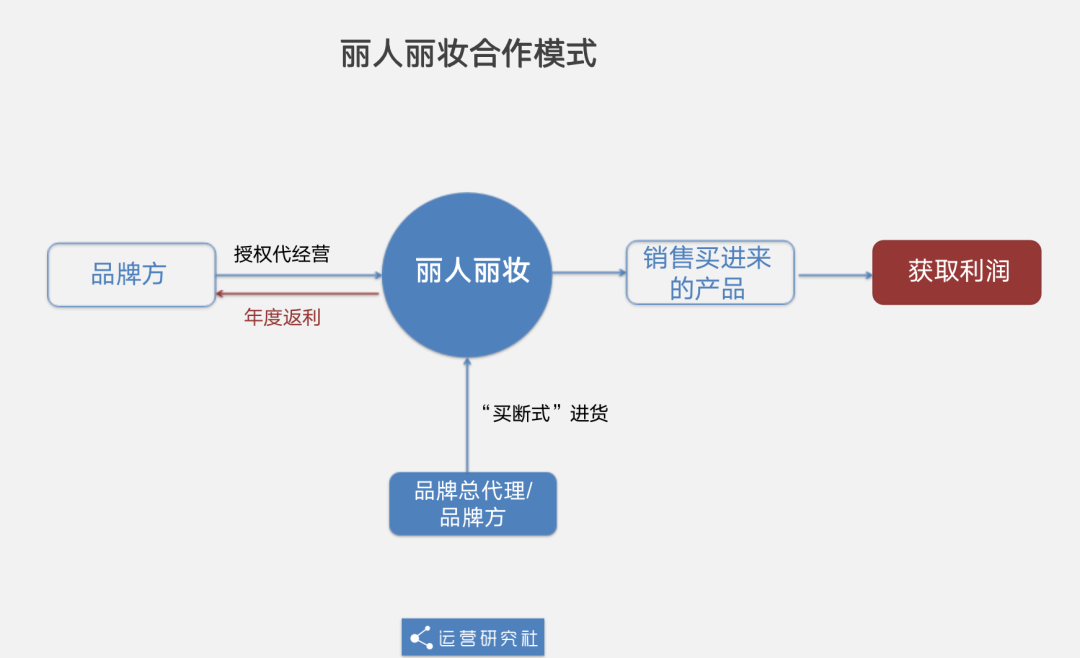 Under this model, its benefits mainly come from two things:

First, the profit of the company’s direct sales of products.

Second, the rebate of the brand side. According to the company’s sales, the brand will give the company a certain rebate every year.

Seeing this, I know, no wonder the things I buy are shipped from a company…

They not only do the work of purchasing, publicity, marketing, and customer service, but also include packaging, delivery and other links. They can be called nanny-level, helping the brand to operate, and the service of agency operation is achieved to the extreme.

2) Competitive moat: own logistics and warehousing

I didn’t expect it! An agency operating company actually has its own warehousing and logistics.

Because there are many brands and large purchases, it is not cost-effective to rent, so they simply built more than 30 warehouses across the country, and they also conducted in-depth research with the Cainiao supply chain (all of them) Cooperation.

Why in-depth cooperation? This year’s Double Eleven, you should feel:

Pay the balance in the early morning, and the package will arrive home and downstairs in the morning…

As long as the user places a deposit, Beauty Beauty will send the goods from the nearest warehouse in advance Send directly to the nearest consumer Cainiao Station, as soon as you pay the balance, the courier will deliver it immediately.

To be honest, this level of supply chain really distinguishes Liren Lizhuang from other pure commission agents.

For brands, if they are all based on data agency operations, if this one is not well done, they will be replaced. Anyway, it is almost the same; moreover, because of the fierce competition, it is easy for agency operators to fall into “low-price vicious competition” Whirlpool.

Therefore, although the supply chain has brought huge costs to the beauty and makeup, it is indeed a dangerous and clever move, allowing it to ensure its uniqueness and competitiveness in the market.

02 Fancy “out of the circle”, marketing roads in the wild

How wild is the marketing of beauty and makeup?

Back then, there was no famous domestic brandAffordable Herbal Medicine, under its magic operation, not only 3 In just a few months, Xiangyi Bencao’s flagship store was on top of the cosmetics list on Tmall. It also generated nearly 200 million sales in 2011…

Although it started with domestic products, in the later cooperation with many foreign big names, Beauty and Lizhuang rarely missed it.

1) Localized marketing helps Guerlain “out of the circle”

In 16 years, Beauty Beauty has cooperated with the French luxury skin care brand Guerlain. At that time, Guerlain’s pain points were very obvious:

Although it is well-known internationally, it only entered the Chinese market in 2012 and is not familiar with the domestic situation.Still tepid.

In order to help the brand open up its popularity, Liren Lizhuang planned a “explosive product” at that time, which was the hot “Yang Yang color”.

At that time, there were almost no male celebrities endorsement lipsticks on the market, so after the endorsement was announced, the discussion was very high.

The most amazing thing is that this event was launched on March 14th “White Valentine’s Day”, and gimmicks such as “4D love letter” and “male celebrity painting lipstick for female fans” were also popular. It also allows fans to have more “combat power”. 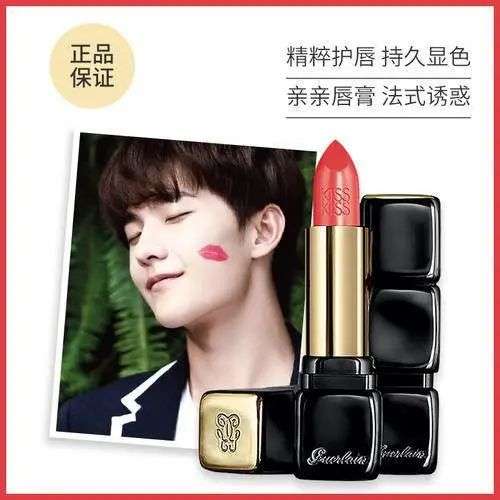 Due to the high overlap between Yang Yang’s fan base and Guerlain’s target users, coupled with the celebrity effect, the drainage effect is directly full.

During this event, Guerlain sold 10,000 + lipsticks, and the overall sales on the official website increased by more than 300%, directly setting Guerlain’s sales record in China.

After this set of operations, Guerlain really went out of the circle. Many people still remember “Yang Yang Se” when they mentioned Guerlain:

I have to say that Liren Lizhuang does have a set to help the localization of international brands.

Papi sauce’s first video ad was sold at a high price of 22 million yuan. At that time, it also set the “highest record for a single video ad,” do you remember?

Yes, that 22 million advertisement was bought by Liren Lizhuang… 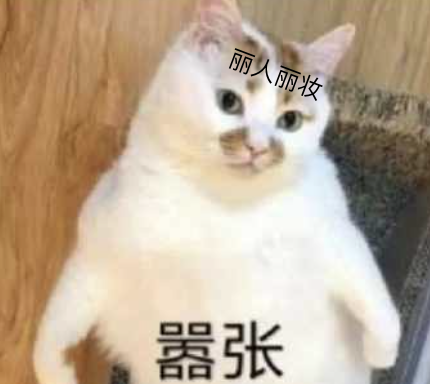 At the time, many people on the Internet thought they were crazy. After all, 20 million people can ask for a first-line statementXinglai is the endorsement. 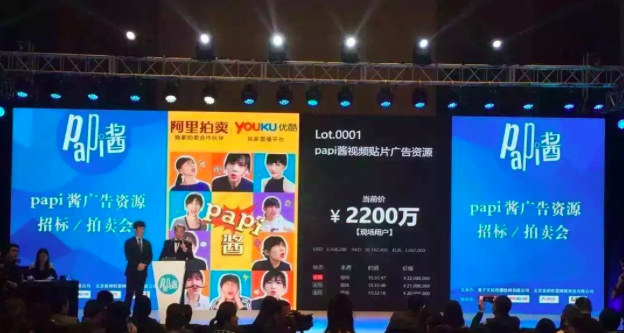 Actually, this auction is just a “topical marketing” for Beauty Beauty.

First of all, this advertisement itself is very valuable. The crowd who talks about Papi sauce completely overlap with the beauty brand agency that Liren Lizhuang is mainly doing:

This wave of traffic is not only large in quantity, but basically accurate traffic.

Secondly, the sky-high advertising price will inevitably cause a wide range of discussions. It is a good opportunity to expand the influence of the brand. It may also take the opportunity to spread the company’s value, help follow-up financing, IPO…

From this point of view, these 22 million flowers are really not a loss.

This kind of topic marketing has been done more than once by Liren Lizhuang.

Some time ago, they also asked Luo Yonghao to sell lipsticks. Not only was the topic highly topical, but the final effect was also very good: a large number of straight male fans commented on “buy, buy, buy”, and more than 20,000 lipsticks were sold in a single session. 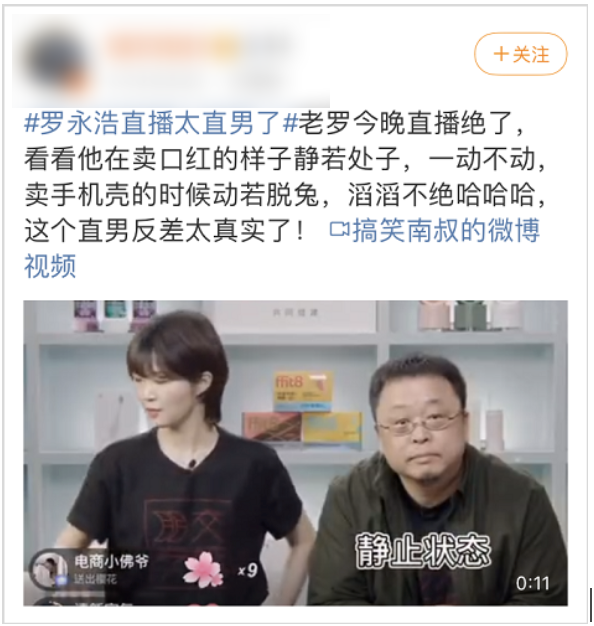 On the issue of live-streaming sales, beauty and makeup are even more sensitive than self-operated businesses. Back in 2016In 1999, they invited Beckham, Zheng Xiujing and other big-name celebrities at home and abroad to do Taobao live broadcast.

I have experience in doing live broadcasts on my own, so Liren Lizhuang and the anchor are very handy when working together.

In 2018, before Li Jiaqi was in the circle, Xiangyi Bencao (operated by Liren Lizhuang) appeared on his live broadcast several times, and his results were very good.

This year’s 618 pre-sale, Whoo (later), operated by Beauty Lizhuang, took the lead. It set a record of over 100 million sales in the single link of Wei Ya’s live broadcast room, and sales surged 3220% throughout the day.

To be honest, there are many merchants in the live broadcast room of Wei Ya, but there are really not many who can sell such results. 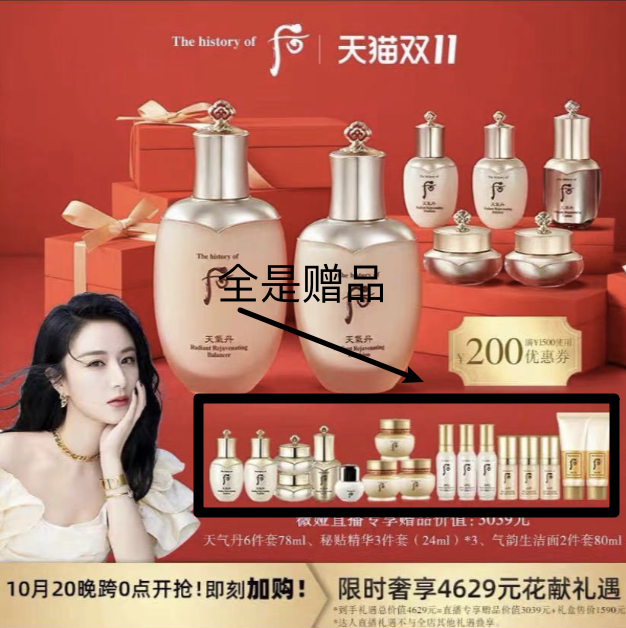 Let’s be honest, although the model and marketing of beauty and makeup are good, there are still flaws that cannot be ignored-excessive reliance on the Tmall platform and unreasonable revenue structure.

In 2019, the company reported to Alibaba The advertising promotion fee paid by the group is 398 million yuan. Accounted for 41% of the company’s sales expenses that year:

Furthermore, because the current profit of Liren Lizhuang’s own sales is very low, only about 5%. Therefore, almost all of the company’s profits come from rebates from the brand, and the income is very simple.

Because of the unreasonable revenue structure, Liren Lizhuang’s first IPO was directly aborted, and it was not listed until the second application this year.

In the current fierce Internet environment, it takes time to test whether Beauty Lizhuang can work hard to make the structure more healthy and independent, or will it be gradually eliminated by the times…