The National Aeronautics and Space Administration (NASA) and the U.S. Department of Energy will solicit relevant industry proposals to build nuclear power plants on the moon and Mars in order to support the country’s long-term space exploration program.

The National Aeronautics and Space Administration (NASA) and the U.S. Department of Energy will solicit relevant industry proposals to build nuclear power plants on the moon and Mars in order to support the country’s long-term space exploration program. The content of the proposal is to establish a nuclear fission power system. The goal is to have the flight system, the lunar lander and the nuclear reactor in place by 2026.

Antoine Carlomino, head of the nuclear technology portfolio of NASA’s Space Technology Mission Agency, pointed out that the plan is to develop a 10-kilowatt nuclear fission power system before the end of the 1920s and conduct it on the moon. Demo. The nuclear fission power system will be fully manufactured and assembled on Earth, and then NASA will conduct safety tests on the system to ensure that it can operate correctly. 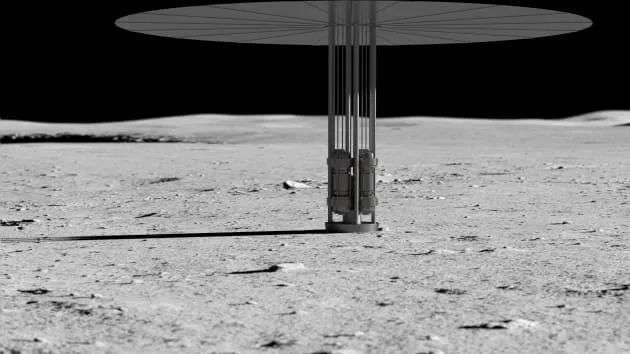 Conceptual rendering of the nuclear fission power system on the moon

After the safety test is completed, the nuclear fission power system will be combined with the lunar lander, and then sent by the launch vehicle to orbit the moon. The lander will send the system to the lunar surface. Once it reaches the lunar surface, the system can be operated immediately without additional assembly. The demonstration is expected to last for a year and may eventually support longer-duration missions on the moon, Mars, and even more distant space.

“Once the technology is certified through a demonstration, future systems can be scaled up, or multiple devices can be used together for long-term missions to the moon and Mars,” Carlomino said. “Four crews, each The unit provides 10 kilowatts of electricity, which is enough to meet the needs of outposts on the moon or Mars. The nuclear fission power system generates large amounts of electricity on the planet’s surface, which facilitates large-scale exploration, establishment of human outposts, and on-site utilization of resources. Provided an opportunity.”

Currently, NASA has cooperated with the nuclear research organization Idaho National Laboratory (INL). However, this NASA planIs it realistic? Is it possible to deliver in just six years?

The answer given by Steve Johnson, Director of INL’s Space Nuclear Energy and Isotope Technology Department, is, “Yes! The plan is completely feasible.”

He explained, “We can use our research and development achievements in advanced fuels and materials over the years, as well as recent breakthroughs in space commercial transportation, to reduce the risk of delays in delivery to achieve the target of 2026. We and NASA is really working hard to bring innovations in the commercial nuclear industry to the public, and the aerospace industry can make full use of existing technologies.”

How will the nuclear power plant work

Caromino claimed that the key technologies to ensure the success of this plan are nuclear reactors, power conversion, heat dissipation and space flight technology. “The low-enrichment nuclear fuel will power the core,” he said. “Small nuclear reactors will generate heat and then transfer the heat to the power conversion system. The power conversion system will consist of engines, which will be based on the heat of the nuclear reactor instead of being combustible. Fuel operation converts heat into electricity, and after adjustment, it is distributed to user equipment on the surface of the moon and Mars. Heat dissipation technology is also important for maintaining the temperature of the equipment during normal operation.”

Johnson pointed out that in addition to the research and development of the past few decades, the existing physical infrastructure dedicated to the creation of nuclear reactors, power conversion, heat dissipation, and space flight technology will make the target for 2026 possible.

He said: “We can use the existing facilities and technical expertise of the national laboratory to support this important proposal in order to achieve the ultimate goal. At INL, we support industry institutions and partners and our Work together to design this demonstration nuclear reactor, unite aerospace, nuclear energy, and power companies to achieve milestone achievements.”

Carlomino said that NASA has reached a cooperative relationship with the U.S. Department of Energy to jointly formulate tasks and system requirements. On the other hand, INL will manage research and development contracts for nuclear fission power systems, including reactors and protection systems, power conversion systems, heat dissipation systems, and power management and distribution systems. He said: “The nuclear fission power system will provide 10 kilowatts of electricity every year, and the operating time is about 10 years.” He added that 10 kilowatts of electricity is roughly equivalent to the electricity needs of 5 to 8 large households.

Carlomino revealed that in order to measure the industry’s interest and solicit the design of the plan, INL has solicited information from the industry and received 22 written responses. The companies that responded were from the aerospace, nuclear power, and power conversion industries. 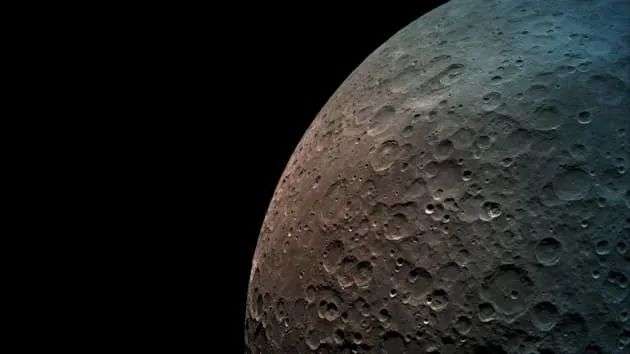 Although Carlomino did not disclose the names of these companies, he emphasized that these companies have extensive experience in manufacturing nuclear reactors, developing aerospace technology, and manufacturing special equipment for this special project. He also said that NASA and the US Department of Energy plan to solicit a series of proposals in early 2021, specifically involving nuclear fission energy. The value of future contract awards remains to be discussed.

“The government plans to award multiple short-term contracts to develop preliminary designs and then award large contracts for final flight hardware development. The companies involved in this project are expected to form a dedicated team to jointly develop this unique and complex nuclear fission power system All the technologies needed. This project is very complicated because it requires the integration of different engineering skills. After all, companies that specialize in nuclear reactor development may not have the corporate knowledge or practical operations that have developed aerospace equipment or power conversion systems “Experience,” the person in charge said, “In addition, the project may also require other specialized communication equipment, sensors, power conversion technology and heat transfer technology. Creating a partnership is the most effective way to obtain these technologies.”

Is it safe to build a nuclear reactor on the moon

To ordinary people, the idea of ​​building a nuclear reactor on the moon may sound unusual, and even some of them may find it extremely dangerous. However, some professionals don’t think so. Andrew Crabtree, founder of the employment agency Get Into Nuclear, is one of them.

Crabtree pointed out that although there are still many factors to consider for this project, there is no need to consider whether it is safe to use nuclear energy in space. He said: “Prior to this, nuclear energy has been used countless times in space. Since Apollo 12 successfully withstood a huge temperature difference in November 1969, atomic energy has been running on the moon. Apollo 12 marked the first time for mankind. Use nuclear power systems on the moon.”

In Crabtree’s view, people who are worried that space will be contaminated by nuclear energy are simply unfounded. “Before you say things like’we shouldn’t let nuclear waste contaminate space’, you should be clear that almost every space mission you’ve heard of has used radioisotope thermoelectric generators.” 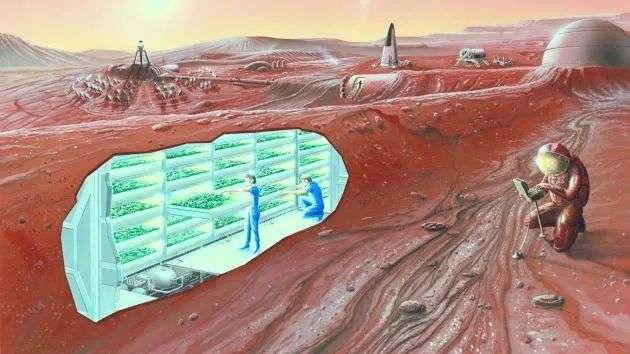 Artist’s vision of a human base on Mars

The picture shows the section of the inner gardening area

Sher Horowitz, who provides profit and marketing consulting services for environmental companies, does not consider the issue of safety, but whether it is necessary to do so.

Horowitz believes that building a nuclear power plant on the moon will be futile and completely unnecessary. He said: “With the rapid decline in the cost of clean energy provided by solar, wind and small hydropower systems, coupled with our increasingly effective energy conservation methods, there is no reason to create time-consuming, expensive A nuclear power plant that feels uneasy. Without it, we can also meet energy needs.”

He explained, “These tasks may require a variety of solar power, batteries, radioisotopes, and nuclear fission power systems to meet a series of demanding requirements. Where solar, wind, and hydro It is necessary. For example, on Mars, the energy of the sun changes greatly with the seasons, and dust storms may last for several months. On the moon, cold nights last for 14 days, and the light near the poles changes It’s very large, and there is no sunlight at all in the crater that has been in the shadow for a long time. In these sharply challenging environments, the use of solar energy is not easy, and the fuel supply is also very limited. In contrast, nuclear power provides A convenient, reliable and efficient solution.” 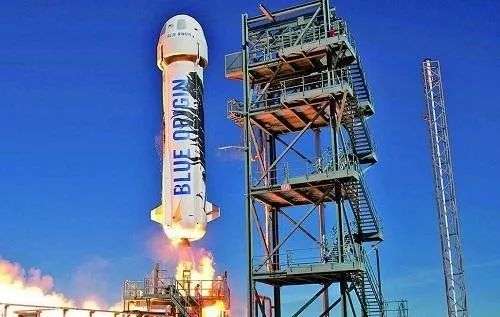 Author of “Integrated Capitalism: A Conservative Vision for Clean Energy”, aSteve Melink, founder and CEO of Melink, a company that promotes renewable energy, pointed out that there are other factors to consider.

“When problems arise, especially urgent problems, how will we solve them?” He asked, “Nuclear energy is so complex that we have to predict what parts and technical personnel will be needed for every foreseeable problem And what supplies to solve. In the next few decades, we will not be able to do this.”

Melink said: “In the past 10 years, the cost of solar photovoltaic has been greatly reduced. At present, public facilities, enterprises and schools in many places on the earth are installing solar photovoltaic. This technology will not cause meltdown and radioactivity. Catastrophic risks such as pollution and complete power outages. Over time, solar energy is the ultimate solution to ensure redundancy and scalability.”

Carlomino claims that ensuring the safety of the project is always NASA’s top priority. This project still needs to pass the approval process of the National Environmental Policy Act, which includes an assessment of the environmental impact of the project. In addition, when designing the power system, designers will ensure that nuclear fuel will not be activated before reaching the lunar surface. Carlomino said: “Unlike ground-based nuclear reactors, nuclear reactors in space will not remove or replace nuclear fuel.”

Carlomino said that at the end of the 10-year mission, NASA has a plan for the safe decommissioning of related facilities. He said: “At the end of the mission, the system will shut down and the radiation level will gradually decrease to a safe level acceptable and handled by humans. The used system may be transferred to a remote storage location where it will not be harmful to the astronauts. Or the environment poses any threat.”

Dr. Jose Morey, chief medical innovation officer of Liberty BioSecurity, pointed out that even if an accident occurs at a nuclear power facility on the moon, it will not pose a threat to the earth. The reason is that the earth is protected by the atmosphere, blocking the deadly radiation generated in outer space. He said: “There are many forms of radiation, and cosmic rays are the most harmful. The universe is full of this kind of radiation, and other forms of radiation can be seen everywhere.”

The doctor added that some companies have shown interest in participating in NASA’s nuclear fission power system project, including the commercial space company Blue Origin of Bezos, the brother-in-law of the world’s richest man, and BWX Technologies in the United States. Currently, the two companies have not commented on this matter.

“Nuclear energy has always been a very clean and extremely effective energy source,” he said. “From a practical point of view, this energy will be the key to space exploration. More importantly, it has become a kind of Multi-planetary species is essential. Before the discovery of the next high-efficiency clean energy, the new dawn of space exploration will witness the recovery of the nuclear industry.”