On February 22nd, SpaceX’s manned dragon spacecraft’s first civil space travel “Inspiration 4” announced its second passenger: 29-year-old anti-cancer fighter Hayley Arceneaux. She will be the youngest American to enter space, and will be the first person in space with prosthetic leg bones. 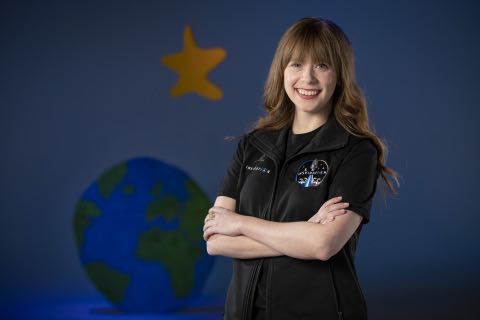 The 29-year-old Arsenal is a St. Judas Child Study The doctor’s assistant at the hospital is also a child bone cancer survivor. Arsenal had part of her femur removed when she was treated for bone cancer at the age of 10, and a piece of titanium alloy artificial bone was implanted in her left thigh.

No one thought that 19 years later, this anti-cancer fighter would have the opportunity to go to space. Arsenal revealed that she will participate in the first civil space travel of the SpaceX Crew Dragon spacecraft. The spacecraft will be launched before the end of this year, and passengers will orbit the earth and conduct experiments.

Last year, Arsenal was hired by St. Judas, and she worked with children with leukemia and lymphoma. The invitation to join “Inspiration 4” came from the St. Jude Children’s Research Hospital, which was also Arsenal’s childhood treatment center. “They asked me if I wanted to go to space. I immediately said,’Yes, yes! Write my name down.'”

Asenno said that she hopes to St. Jude’s patients provide inspiration. “They will see cancer survivors in space, especially someone who has experienced the same thing as them.” She said this will help patients imagine their own future.

The flight named “Inspiration 4” was “contracted” by 37-year-old American billionaire Jared Isaacman. On February 1, local time, SpaceX announced that it would send Isaacman, CEO of American online payment processing company Shift4 Payments, and three others into space as early as the fourth quarter of this year.

This flight will last 2-4 days, will not dock with the International Space Station, and will splash on the Florida coast when returning. The 4 seats represent leadership, hope, generosity and prosperity. Isaacman is the commander of this space tour, and the remaining three seats he bought will be donated to the American public. Among them, Arsenal won the “hope” seat.

Via IsaKerman’s payment company provides the platform Shift4Shop to create online stores and publish business stories on Twitter, who can compete for the “prosperity” seat. Those who donate at least US$10 to St. Jude’s Children’s Research Hospital this month will have the opportunity to draw a “generous” seat.

Isaacman said that he plans to donate US$100 million to St. Jude’s Children’s Research Hospital, and hopes that the donations from other donors motivated by the lottery will add up to Exceed this number.

According to the New York Times, Arsenal and Isaacman have visited SpaceX’s headquarters in California three times to meet with engineers and start planning the trip. In the “prosperity” seat competition, as of last week, fewer than 100 people had submitted complete entries. In terms of “generous” seats, so far, donations have raised approximately US$9.5 million.

According to a space.com report, from the current situation, Arsenal will become the youngest American spaceflighter than the first American woman to enter space Sally Ride (Sally Ride) is two years earlier. Ryder’s first flight was in 1983, when she was 31 years old.