Director Peng Xiaofeng told the Caijing reporter that if a long-term price policy can be introduced to support V2G’s participation in green power transactions, grid auxiliary services, and demand-side response, the V2G business model will be more attractive, and V2G will have a broader scope. Prospects.

In addition, the large-scale development of V2G must be built on the basis of the number of electric vehicles and the scale of charging and discharging facilities, which is currently not available. The industry predicts that from 2030 to 2035, the number of electric vehicles, the technical level of batteries, and the construction of charging and discharging facilities will usher in an explosive period, driving the car-network interaction into a mature period.

The China Re Center Vehicle Network Interactive Demonstration Station, located in Xicheng District, Beijing, was put into operation in June last year. It was the country’s first commercial V2G charging and discharging station. There are a total of 12 charge-discharge bidirectional piles on the third and fourth floors of the building. Ordinary electric vehicles can be charged here, and electric vehicles with V2G functions can be discharged to power the building during peak electricity consumption.

The price list published by the China Re Center Demonstration Station shows that the electricity price is 0.3023 yuan/kWh during the trough period of electricity consumption (11 pm to 7 am the next day), and the peak time (10 am to 3 pm, 6 pm From 1 to 9 pm) 1.4167 yuan/kWh, and 1.2884 yuan/kWh during normal hours. Electric vehicles are discharged during peak hours, and the discharge price is 0.7 yuan/kWh. That is to say, in the mode of valley charging and peak discharge, the car owner earns nearly 40 cents per kilowatt-hour of electricity.

Ms. Yan, a staff member of the State Grid Electric Vehicle Company, will fully charge her electric car during the charging pile valley period of the community. After arriving at the company during the day, she connects the electric car to the interactive pile. The V2G platform is based on the needs of the car owner and the grid demand , Automatic charging and discharging. Ms. Yan’s electric car battery has a capacity of 52 kWh. After deducting the electricity required for commuting to and from get off work, the discharge capacity is about 30 kWh each time, and the net profit is 12 yuan. “It can cover daily driving expenses, but also have additional benefits.” Ms. Yan said. 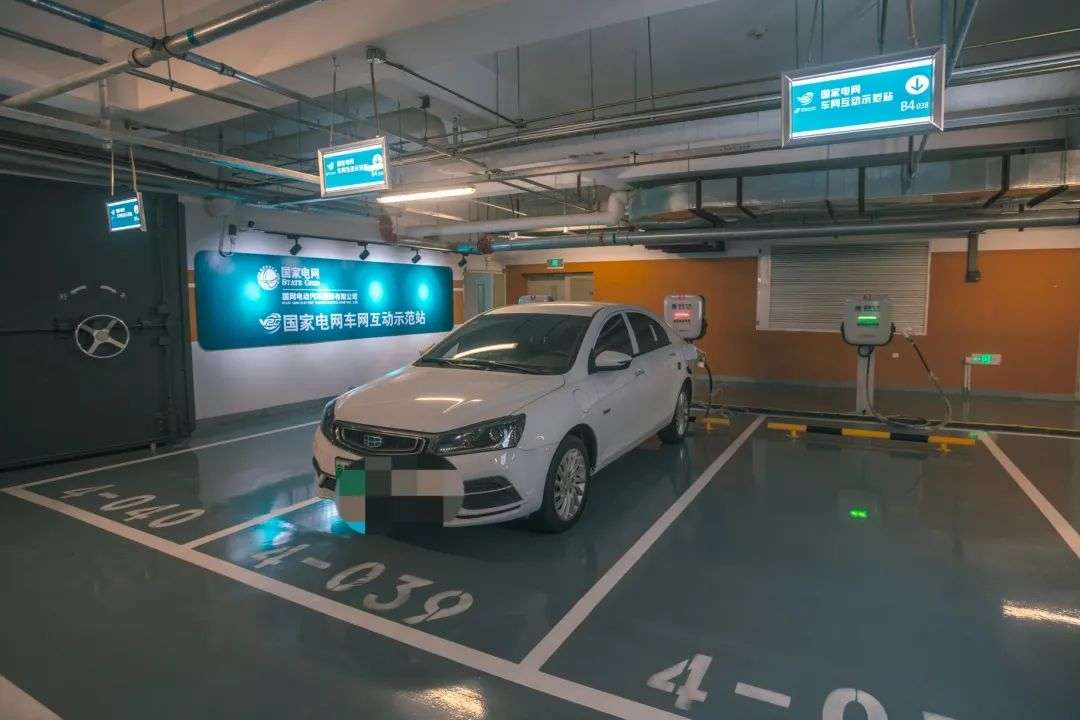 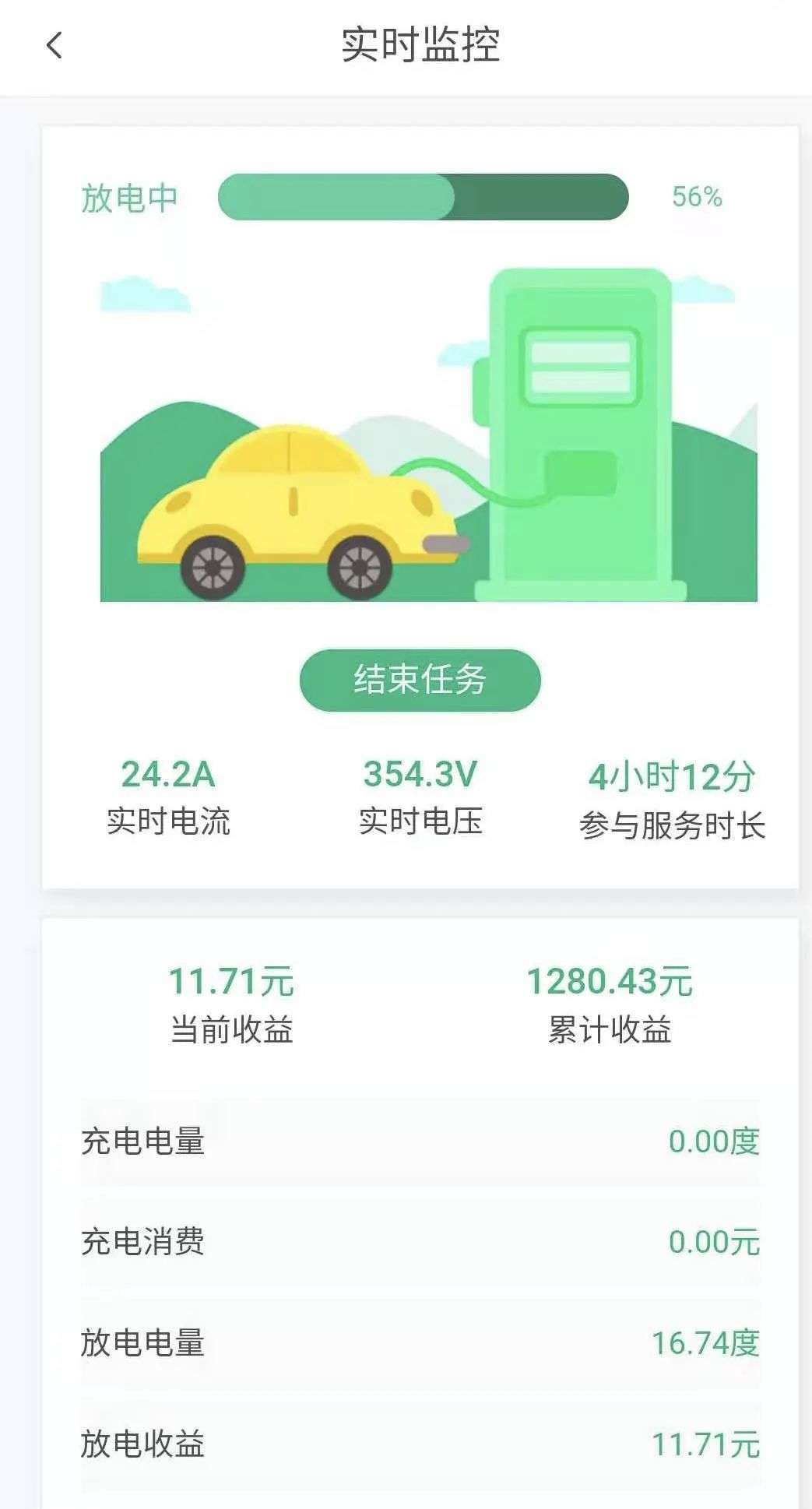 State Grid Electric Vehicle Company provided information to Caijing reporters that from the end of June to the end of December 2020, there were 1,228 smart charging and discharging orders for the demonstration stations of China Re Building, and the cumulative discharge income of all car owners was 15025.13 yuan . Since the station is still in a small-scale pilot application, only 94 electric vehicle users participated in charging and discharging.

In Shanghai, the State Grid NIO Chuangxin Port public charging and discharging demonstration power station was put into operation in late September 2020, with a total of 15 two-way interactive piles. The station is invested and constructed by State Grid Electric Vehicle Company and operated by Weilai Automobile Company. Shanghai Chuangxin Port is the global headquarters, R&D center and user experience center of NIO. All employees of NIO are participating in the discharge business of the demonstration station.

Liu Jun, the interactive product manager of Weilai Auto.com, told the Caijing reporter that she would discharge her Weilai electric car twice a week, each time around 30 kilowatt-hours. Different from the demonstration station in Beijing, the car owners get the points in the interactive community of Weilai Automobile for discharging at the station, and each kilowatt-hour of electricity is exchanged for 8 points. Points can be exchanged for event tickets, purchase goods, and pay for charging in this community.

In the Shanghai Chuangxin Port Demonstration Power Station, the electricity discharged by electric vehicles is directly used for other local energy-consuming equipment, and has not yet been incorporated into the auxiliary peak regulation system of the power grid. Liu Jun introduced that Weilai believes that car network interaction can maximize the value of electric vehicle power batteries, and is very optimistic about the development prospects of V2G. Therefore, all its models are equipped with car network interaction functions.

Whether it is in Beijing or Shanghai, at present, the development of interactive business between electric vehicles and networks is only a small-scale pilot. The industry believes that the development of V2G is to achieve orderly charging and orderly discharging. Discharge is a new thing, the time for large-scale promotion is not ripe, and orderly charging has the foundation for national promotion.

State Grid Electric Vehicle Company plans to build 100,000 orderly smart charging piles in 2021, including personal piles and public piles. Compared with ordinary charging piles, ordered piles can adjust the charging time and power of vehicles according to the load conditions of the grid, and shift the charging load from peak hours to valley hours. Weilai has also launched activities to encourage car owners to charge orderly in its charging APP and interactive community. Since November last year, thousands of Weilai car owners have tried orderly charging.

Fang Yinliang, vice president of Roland Berger Greater China, the world’s leading strategic consulting company in the automotive industry, told Caijing reporter that the V2G model is a promising business model, but it is expected to be only an exploration and pilot program by 2025. Only later will it be possible to land on a large scale.

The immediate problem for car network interaction is the lack of unified technology and price standards. In the long run, how to shape an attractive business model.

Huang Qili, academician of the Chinese Academy of Engineering, recently stated at the China Electric Vehicle Hundreds Conference that the technical standards for car network interaction have not yet been unified, host manufacturers and charging and discharging operators have different opinions, and there is no price standard for V2G. At the same time, the project could not be promoted smoothly due to the lack of standards and specifications such as power access and fire protection acceptance.

The industry believes that it is not difficult to change one-way charging piles to two-way charging and discharging piles, and the cost and technical requirements of adding vehicle-network interaction functions to electric vehicles are not high. The main technical challenge lies in how to ensure that the battery life of electric vehicles is not affected by the increase in the number of charging and discharging. This is the biggest doubt that electric vehicle owners have about the interactive mode of the vehicle network.

It is the number of charging cycles that determines the service life of a battery. V2G will undoubtedly increase the number of charging and discharging of the battery. State Grid Electric Vehicle Company and Ningde Times, a battery manufacturer, conducted a research on the battery life of V2G under various working conditions, and finally selected a 15kW power V2G DC charging and discharging pile. In addition, State Grid Electric Vehicle Company also cooperates with automobile OEMs to provide additional V2G cycle times warranty conditions for V2G vehicles.

Peng Xiaofeng said that with the continuous advancement of power battery technology, the number of cycles of battery packs produced by domestic leading companiesThe number has generally reached more than 2000 times. A V2G vehicle used by the Beijing China Re Center Demonstration Station is provided by the manufacturer with an 8-year warranty of 150,000 kilometers plus 1,700 V2G cycles, which means that the power battery can be charged and discharged nearly 70,000 degrees during the full life cycle of the V2G application. . For car owners, this is a gain of tens of thousands.

In terms of policy standards, the top-level design of car-network interaction has basically taken shape. The next step is to implement supporting policies and formulate industry standards.

The central government has been promulgating support policies for car-network interaction since three years. In 2018, the National Development and Reform Commission issued a notice to encourage electric vehicles to provide energy storage services and obtain revenue through the peak-to-valley price difference. The “Plan” issued in November 2020 clarified the development direction of V2G from a macro level.

Xin Guobin, deputy minister of the Ministry of Industry and Information Technology, stated in the release of the “Plan” that every new energy vehicle is an energy storage unit and a new digital space. The Ministry of Industry and Information Technology will follow up with relevant authorities to strengthen coordination and cooperation, strengthen research on technologies such as high-cycle-life power batteries, high-performance two-way charging and discharging, speed up the construction of standard systems such as V2G interfaces and vehicle-network interaction, and encourage the exploration and development of V2G applications where conditions permit demonstration.

State Grid Electric Vehicle Company has taken the lead in compiling the communication protocol in the process of discharging the piles and applying it to the pilot project. To formulate a unified national discharge standard, it is also necessary for relevant ministries and commissions, as well as OEMs, battery factories, and pile enterprises to cooperate and verify to ensure that the relevant standards are compatible with various charging and discharging processes and application scenariosThe auxiliary form of peak shaving is realized, and it is hoped that the upstream and downstream of the industry can jointly promote the deepening of V2G technology and promote the introduction of relevant policy mechanisms.

In Guangzhou, where the reform of the electricity market is fast, the market access for grid auxiliary services is gradually being relaxed, providing more space for the development of vehicle-network interaction. According to Su Zhipeng’s calculations, if electric vehicles are used as a backup power source for grid frequency modulation and are equipped with renewable energy during the charging process, the electric vehicles can provide load-side second-level adjustment capabilities when the renewable energy needs to be adjusted upwards. In this case, the annual cost of renewable energy per kilowatt can be reduced to about 10 yuan, which is much lower than the cost of 80-160 yuan for load reduction operation of peak shaving units, and also lower than the cost of 20-30 yuan for energy storage.

If policy restrictions are released, participation of electric vehicles in power demand side response will also be a business opportunity for integrated energy service companies. Electricity demand-side response refers to the use of market incentive mechanisms to guide users to adjust production time, optimize resource allocation, and alleviate the contradiction between power supply and demand.

GCL Integrated Energy Service Co., Ltd. is one of the most important power load integrators in Jiangsu Province. Niu Shubin, the chairman of the company, told a reporter from Caijing that the participation of electric vehicles in demand-side response will be the company’s future development focus.

At present, the scale of development of car-network interaction in various countries is very limited, one is because the number of electric vehicles is still small, and the other is because the business model is still being explored. However, in developed countries in Europe and the United States where the electricity market is mature, vehicle-network interaction has entered the market transaction link on the transmission side. Next-Kraftwerke, Germany’s largest virtual power plant operator, manages thousands of distributed power generation equipment and energy storage equipment, and electric vehicles are also in its virtual power plant platform.

Zhang Shuwei, director of the Zold Environmental Research (Beijing) Center, told the reporter of Caijing that the core of car network interaction is to see whether the difference in electricity prices is large enough. The larger the difference, the more it can encourage car owners to charge and discharge.