There are ten buckets in the US stock market
,
Technology stocks account for eight buckets
,
Consumer and finance are divided into one fight
,
The rest is divided into a bucket
.

Recommended on behalf of the US stock market technology stocks performance of the NASDAQ 100 Index (NASDAQ 100 Index, in fact not too pure, will be discussed later), from 1043 to 7600+, a 620% increase in ten years +.

The NASDAQ Internet Index (the weighted stocks include Google, Facebook, Alibaba, Amazon, etc.) is 1000% from the 2009 low, 10 times ten years
.
Undoubtedly
,
This wave of bull markets is essentially a big bull market for tech stocks
.

There is also a data, the MSCI World Technology Index, which has increased its total market capitalization by 5.7 trillion, $5.7 trillion since 2009. Considering that the total market capitalization of the A-share market, the world’s third-largest securities market, is only 6-7 trillion, which is of course an astronomical figure. But the 5.7 trillion figure is not as scary as the technology stock itself, but 5 Microsoft, or 10 Facebook, or 13 Ali, or 27 Intel, or the most amazing – 40 Netflix – . This is really fantastic
,
I am a big country
,
All A-share market
,
Add up to 40 streaming media companies
.

The other question that I can’t answer is: When will A shares usher in the big bull market of our technology stocks
?

One
,
Definition of technology stocks

Of course, some people will come to blame me: the fee is so dry, the heavyweights are the same big ones anyway, the difference is not bad. This criticism is right, but I am pursuing purity. If you don’t have the spirit of cleansing in this area, actually these fewThe ETF difference is really small. Why
,
Because of the weight of the leading technology stocks in the industry and the high industry dynamics brought about by its performance
,
There are several faucets in your portfolio
,
The vast majority of Alpha is already in the bag
.

Modern technology after the Industrial Revolution, Use“A Dream of Red Mansions >In the middle of a seven-word song by a gentleman,,I’m going to sing, I’ll be on the scene, Reciting his hometown is his hometown. Take the stars,internal iterations,external revolution, Global sharing
.

The revolution is an evolutionary history. Every era has its own technology, just like rail transport in the 19th century, aerospace and energy in the 19th century, 20& 21st century IT; and a mature capital market will be like a gossip mirror What is the truth of the times?
“
Technology
“
.
The following figureRepresenting the industry weights of the US stock market since 1800, from transportation (mainly railways, cars and aerospace) to energy (internal combustion engines, electrical revolution) and materials (new polymer materials) to information technology, we can say :Technology and Capital
,
It’s two sides of the coin
.

Technology that belongs to our time, anyone can see that it is IT, the Internet… Well, I have a god stick on the right hand side to say the blockchain, then add a blockchain (manual dog head). So this is exactly what the US technology industry has to say.
,
Unscrupulous definition
,
Starting with semiconductors
,
To computer hardware and software
,
To IT and the Internet
,
This string becomes the technology spindle
.

There are two peaks in life in this industry. The first one appeared around 2000, the so-called Internet bubble (Dotcom Bubble); the second is at this moment. This is the technology of our time and belongs to our Kaiyuan prosperity.

So we can define the word of technology as above, which is a common example of tech in the US stock market. Of course you can also join biotechnology
,
As there are some biotech companies in the NASDAQ 100
.
The 21st century is indeed the century of biology. Many people may take this stalk to ridicule the biology of graduation and unemployment.Son; they understand it incorrectly, The 21st century is the century of biology
,
But no one says it’s a century of studenthood
.

This article is called technology, IT + Bio is also.

Two
,
History of changes in capital and technology dance

FAMGA represents the acronym for the five company giants with the highest listing value on the planet. They are Facebook, Apple, Microsoft, Alphabet (the parent company of Google), and Amazon. If you go back ten years, this abbreviated acronym is an investment opportunity for Jinshan Yinshan.

But if you think of the behemoths of these rich and powerful countries (the permanent members), the oldest Microsoft is only 44 years old, and the smallest Facebook is only 15, not yet adult. In the past, we thought of the giants on the earth, always thinking of a hundred-year-old shop like Citigroup Mobil Pfizer; or at least the holding companies of Berkshire Hathaway, which are all over the years. The accumulation. The technology group group is definitely the first time in human history.

The picture below is very shocking. The top ten companies in the world market value, 1234 and 7.8 are all technology companies, and the ninth is the financial payment company Visa, which can be a hot technology. Ranked tenth is JJ, a large company in the 21st century.

And then the picture below will be more white clouds, dogs, fighting stars, and Wuhai Wushan. This picture reflects the changes in the top 10 global market capitalization list from 1999 to 2019. During the Internet bubble in 1999, the technology leaders Microsoft, Cisco, Intel, and Nokia all saw the top of the valuation. At that time, everyone was unrealistic about the Internet and IT communication, and Nokia was considered awkward.

After the Internet bubble, the old economy resumed. After 9/11, oil prices soared from $20 to $140, and Mobil, BP, and GE returned to the throne. At the same time, the US housing price bubble splashed, and Citigroup, AIG and other financial institutions hit the peak of valuation; after the rise of our great powers, PetroChina and ICBC joined hands in 2009, 2010 Touching the top; and in 2014, at the high oil price of 100 US dollars, Apple, which had not been on the list before, made Meifu the second child through the iPhone. Later, technology stocks gradually climbed, and the old economy went with the wind, from the subprime crisis to the oil price collapse and then to the big countries. Up to now, FAMGA has unified the rivers and lakes, I do not know if it will last forever.

The majority of these technology stocks have been criticized and not understood. The most famous is that Buffett’s “do not understand I don’t vote.” There are also some people who think that a “website” like Facebook does not have a moat, and death is said to die. However, they don’t have a deep understanding of Facebook, and they don’t care about the dazzling layout expansion all the way; they concentrate on thinking: breaking the website, can’t understand. Domestic ugliness and disregard of Facebook is even more confusing. Three people become tigers
,
No independent thinking
,
The essence of most humans is the repeater
.

Three
,
Why invest in technology stocks

Technology often means monopoly, and monopoly often means extremely high profits – accurately expressed in economic jargon – is economic profit. Economic profit takes into account opportunity costs, which is the biggest difference from accounting profits. Industry without a threshold that is generally fully competitive
,
Economic profits are 0
,
Because its accounting profit is equal to opportunity cost
.
How to understand this concept I have written in the introductionIn the article on the TMT investment strategy of the hedge fund Coatue, take a look at it.

“The TMT industry has its own unique value creation model. But before blowing this model, I need a foreplay to lay out an important concept called “economic profits” (calculated as net operating profit minus capital cost). /p>

Accounting calculates profit, that is, income minus cost; and the economics of the bar is the income minus the “all costs” when calculating the profit, especially the opportunity cost.

For example, Dongge invested 100,000 yuan in a tea shop, and earned 100,000 yuan a year in a small shop. This 100,000 is accounting profit, which seems to be slightly small. But Dongge’s tea shop has other hidden opportunity cost losses – for example, if you don’t open a store, the 100,000 deposit bank can get two thousand interest; another Dong Ge is a business wizard, if his energy is put In operating a large listed company, he can earn one billion a year. From this, for Dongge, the “economic profit” of the tea shop = 100,000 pieces of income – the opportunity cost of two thousand pieces of funds – the opportunity cost of one billion pieces of human resources = nearly one billion losses.

A full and realistic consideration of opportunity cost is the biggest bright spot of economic profit, so it can be said that economic profit is the ultimate concept of profit, and all costs are included. We can even say that only companies that can create economic profits can say that they have created “value”; and if profits are not able to match the cost of capital, that is, the destruction of value, it should be destroyed by humanity.

You may think that the concept of economics is boring, but it is very useful in industry analysis. Economic profits can help us find good industry and good track.

The industry with low economic profit must be a fully competitive industry. There are fewer wolves and fewer thresholds. The industry with high economic profits must be a certain high threshold to limit competition. Of course, as mortal people have one death, in the long run, all industries will end up with the same goal – the final economic profit will be dried to zero. Because as long as you have economic profits, there will be people who want to do everything possible and cut their feet. Therefore, the long-term development of old industries, such as railways, can even be a negative profit, and profits cannot cover the cost of capital.

But the emerging TMT industry has become increasingly talented in creating economic profits in recent years.

McKinsey has surveyed 2,400 listed companies worldwide across 59 industries, and TMT’s five segments: software, consumer electronics, media, telecommunications and cable operators, are on the rise in economic profits ( See below). If your investment avoids technology companies – of course you can stick to “do not know what to vote for”, I can’t refute – your tongue will also avoid the most delicious cream on the cake. According to McKinsey’s projections, the economic profit of the TMT industry has increased more than 100 times from 2000 to 2014. 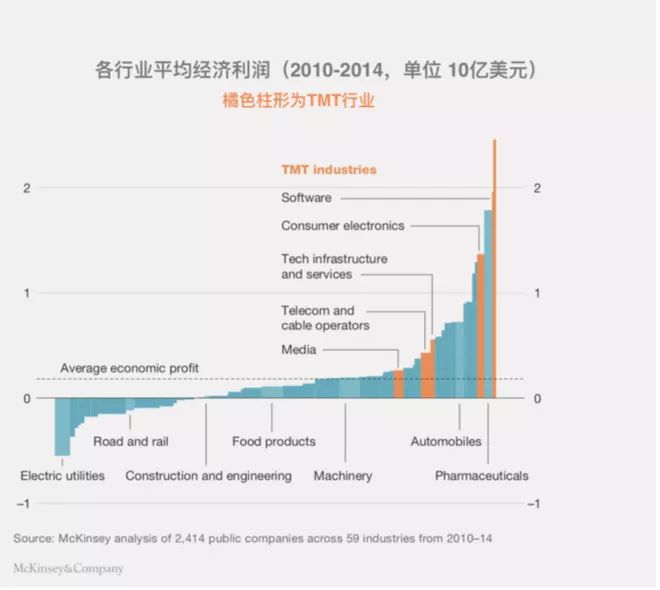 Investment must be profitable
,
And the economic profit from technology stocks
,
Currently
,
All other industries can’t expect it to be back
.

About the Author: Chanda, working and living in the United States VII contains, with the North American elite MBA, double master’s degree in business leadership. He has worked for a top US securities company as a certified investment adviser and has many years of in-depth research experience in the US securities and investment markets.