At the annual Qualcomm Snapdragon Technology Summit, the big screen on the stage popped up with keywords such as 5G, AI, and games. Finally, it was fixed in the big characters of “Snapdragon”.

According to Cristiano Amon, president of Qualcomm, 5G will bring a new opportunity for Qualcomm and the entire industry. The new Snapdragon 5G mobile platform will also promote the industry to achieve 5G scale in 2020. Deployment vision. On the first day of the Snapdragon Technology Summit, Qualcomm officially released the new generation of flagship mobile phone chips after the Snapdragon 855, 855+-Snapdragon 865, and a new 7-series chip Snapdragon. Dragon 765 / 765G.

Alex Katouzian, general manager of Qualcomm mobile business, emphasized that Qualcomm hopes to lead and drive the development of 5G and AI in 2020. 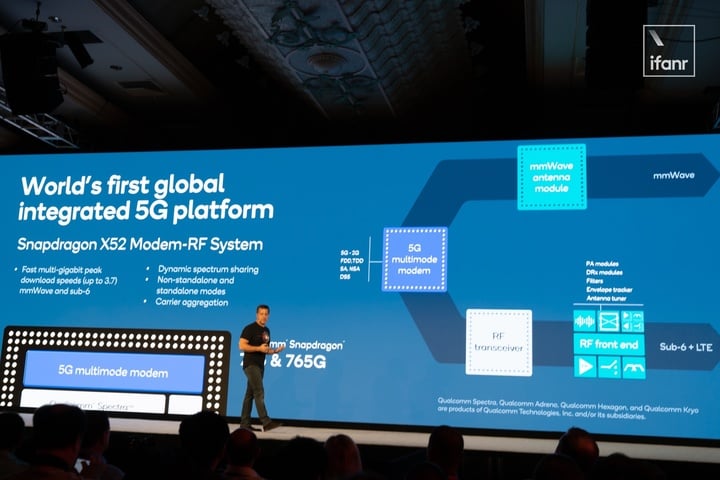 The Snapdragon 765 / 765G integrates the X52 5G baseband. It also supports 5G dual-mode, and the downlink rate can reach 3.7Gbps. This is also the first Snapdragon chip with integrated 5G baseband. Qualcomm also introduced 3D Sonic Max, a new generation of ultrasonic fingerprint recognition technology at the first-day summit. It supports 17 times the recognition area of ​​the previous generation, and can support two fingers for fingerprint authentication at the same time, further improving security, unlocking speed and ease of use. However, Qualcomm did not occupy a very obvious advantage in the initial stage of “5G chips”. In the past six months, issues similar to non-integrated baseband and non-dual mode have caused the first batch of Qualcomm 5G mobile phones such as Vivo and Xiaomi to use the Snapdragon 855 + external 5G baseband combination.

More importantly, when Huawei, Honor, etc. have already come up with competitive products that support 5G dual-mode, and the chip integrates the baseband, it is difficult for Qualcomm 5G mobile phones to occupy much advantage in marketing.

Time does not wait for people. In fact, even in the initial stage of 5G, there will be some decision-making effects on mobile phone manufacturers.

At the Qualcomm earnings conference in August , Qualcomm CEO Steve Mollenkopf stated that Huawei ’s rapid growth in China ’s domestic mobile phone market has led customers such as Xiaomi to bet on 5G and cancel orders for 4G models, which has affected the outlook for Qualcomm ’s performance. The recent trend is that some mobile phone manufacturers are seeking new ways, and some of the pre-market 5G chips are regaining their customers from Qualcomm.

A week ago, MediaTek has released the first 5G Soc chip “Tenya 1000”, which uses ARM’s next-generation Cortex-A77 CPU architecture and also supports 5G dual-mode features. We had also commented that , MTK this release 5G chip and feel of” counter-attack “taste, after all, it papers The surface parameters are pretty good.

It is reported that the first mobile phone equipped with MediaTek Teana 1000 is likely to be the Redmi K30 released on December 10. It is expected that there will be other terminals listed in the first quarter of 2020. On the other side, Vivo has released a variety of 5G mobile phones. It has also jointly developed a 5G baseband and dual-mode chip Exynos 980 with Samsung. It also uses ARM’s A77 architecture.

This is also after the fingerprint on the screen, vivo has once again participated in the pre-definition stage of upstream components, and obtained the prior use right in the form of joint research and development. The first chip equipped with the vivo X30 series is expected to be released in December.

As you can see, Xiaomi andVivo will choose MediaTek and Samsung’s 5G chips, not performance first, but to be as versatile as possible. This is why dual-mode, baseband integrated design, etc. will become priority factors.

If Qualcomm wants to continue its status as a mainstream chip manufacturer in the 3G and 4G era and gain more orders from terminal manufacturers, it still has to come up with a chip solution without obvious short boards as soon as possible.

This is also the main task of the future Snapdragon 865 and Snapdragon 765 chips. At present, OPPO still chooses to keep up with Qualcomm’s 5G chip release rhythm. The first OPPO Reno 3 mobile phone equipped with Snapdragon 765 chip is planned to be released in December, which will also be implemented by OPPO in the Chinese market. The first mobile phone to support 5G dual mode.

In addition, Xiaomi Lin Bin also stated that The Xiaomi 10 flagship mobile phone, which will be launched in the first quarter of next year, will also become the first device equipped with the Snapdragon 865 chip. Even if vivo and Redmi choose Other partners, but on some key models and flagship devices, Qualcomm basebands and even Snapdragon chips will still be their first choice.

Apple also chose to settle with Qualcomm in April this year. The two parties have reached a global patent license agreement for up to 8 years, and related chipset supply agreements. This means that in the next few years, Apple’s iPhone will use Qualcomm’s 5G baseband chip. The sale of mobile phone chips and the grant of various patents are still the core revenue source of Qualcomm, and it is also the most representative part of the smart phone industry’s competitiveness.

In the coming era of 5G popularity, will Qualcomm continue to occupy most of the core of Android phones as before, or will it face a new round of competition? This is not only related to Qualcomm’s chip business, but also to the direction of the entire mobile phone industry.