After ten years ago, I Gotta feeling took over. Boom Boom Pow dominated the US BillBoard list, and two heavy hotlists continued to climb the list for 26 weeks. Some say that The Black Eye Peas overdrafts the popularity of the next decade.

After ten years, Black Eyed Peas lost the female member Fergie, still facing the hope of rejuvenation. The founder will.i.am also tried to launch a solo album, but the results are more general, but sit still The position of the “British Good Voice” mentor has been for several years.

However, in addition to music and technology, will.i.am is actually a technology expert. For example, he was the creative director of Intel in 2011, in his second Solo. The album also includes a single called Geek, which uses Intel’s iconic “lights such as lights”. Later, I also created the trend technology brand i.am+

Why did you mention Black Eyed Peas? It’s because I recently received a genuine wireless headset, Buttons Air, which is actually a product of i.am+.

Buttons Air gives me the first feeling that it is different from other real wireless headphones. This different feeling is even earlier than seeing the charging box. When you unpack the package and the box is pulled out, you will find The gene for trend design is deeply embedded in this product. Because the packaging of this true wireless headset is actually very interesting, after removing the outermost outer packaging, it uses a book-type design to load the product. You can think that the packaging of the SD card is similar. And then put the charging box and accessories together on a book.

The advantage of doing this is of course good-looking. The downside is that the storage is sacrificed in nature. The packaging is disposable. If you open it, you can’t put it back. The other SD card of the photo I took has also recently disappeared, resulting in no pre-opening. It’s good to say that the headphones are good. In fact, when you see the charging box, you may think of the powder box first, but the cool black color and skin-like material tell you that it has nothing to do with the beauty products. A rounded shape like a skull with a round mirror. It’s really the mirror that can be used as a mirror, but there are two “peas” designs in the middle.

This charging box is not small. The overall volume gives me a feeling similar to Sony’s new noise-reducing bean WF-1000XM3, but this rounded shape feels too much in my hand.

The power required to turn on this Buttons Air charging box may be the biggest in the wireless headsets I’ve seen, and it may be a bit of a pain when I close it. After opening the charging box, you will see two wireless headphones quietly stored in the box, but the first time it is turned on is really a bit confusing, because the headphones are not in the center of the charging box, but occupy the bottom position. There are still a lot of vacancies on it.

Buttons Air generously presented a whole page of earphone sets, including in-ear and shark fins. The variety is different, but it is very troublesome to store.

The connection of the headset is very simple. Take the right ear of the Buttons Air out of the charging box first, then remove the left ear, then it will automatically enter the Bluetooth pairing state and connect directly to the mobile phone. Unfortunately, there is no simple re-pairing gesture, so if you want to connect to the second headset, it will be a bit of a hassle, because you will automatically connect to the previous one if you remove it from the box again after connecting. From my own experience, it is best to turn off the connected mobile phone Bluetooth, and then repeatedly put it in and out until another phone is connected to Buttons Air.

Connected Buttons Air will automatically enter aptx mode, yes, this is a true wireless headset based on Qualcomm QCC5100 chip, which supports aptx encoding transmission, but mentioned in the brochure is aptx HD, here should It’s a mistake, because even if I force aptx HD in the mobile developer option, it won’t work. In addition, Buttons Air does not have any official App available, which means that it may not support any form of firmware upgrade or equalizer adjustment, it will be relatively rigid, I don’t know if it will. I.am is really confident in my tuning.

Bass head, it is recommended to change the earmuffs

Speaking of the sound performance, Buttons Air gave me both surprises and surprises. Because Buttons Air is actually the same as Bird’s Track Air series, the catheter is very short and is actually semi-closed. However, according to my habits, I chose the in-ear silicone sleeve, which is more secure to wear. But I was a little scared by the sound of Buttons Air. The first feeling sounded like a lot of low frequency, but the vocals were rather stuffy. In fact, this pair of headphones is really suitable for “moving times” music, drums are powerful, but the performance of vocals tells me to use it to listen to electronic music. In fact, it is really suitable for the black eyed peas in the electronic gods in 2009. The tuning tendency also shows that will.i.am has been obsessed with the state of electronic music in recent years.

When I tried to change a pair of shark fin earmuffs a few days later, the sound of the whole sound was different immediately. Although the sound insulation became almost no, the tri-band sounded a lot balanced, never again. There will be a rush of music, and Pop, R&B, Soul and other types of music have become a lot better. 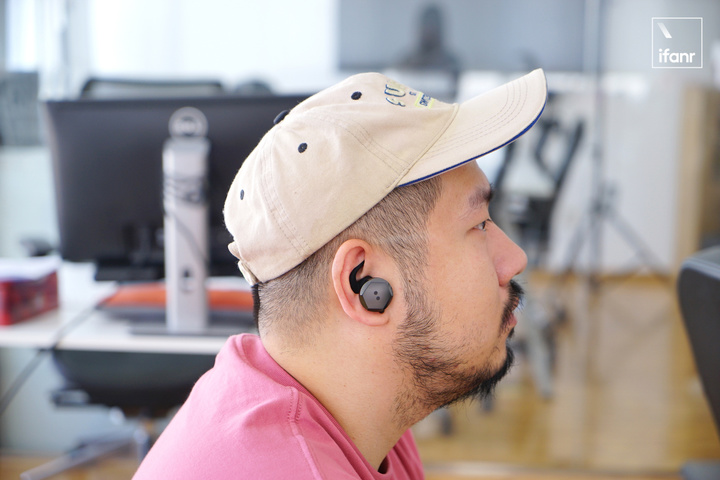 Selecting shark fins is because I don’t feel a bit loose because of the non-in-ear headphones.The shark fins can help me to stabilize in the ear cavity, and the actual feeling is also much better than the shark fin.

Although there is nothing special about the wearing feeling, the “decorative feeling” after wearing it is very good. Whether it’s the hexagonal “Yao Shi” or the disc-shaped “Yao Jing” model, there is a trend of earrings after wearing it. Of course, many people don’t think so, but they feel ugly. ). In fact, i.am+ is a trend technology company, and this kind of design is naturally deliberately created. Although I have tried a lot of real wireless headphones, it is still the first time that I have spent so much thought on the shape.

But because it is designed to be a flamboyant earring style, in fact, this true wireless earphone is not light, the volume is too large, the internal space is also relatively large, so that the 11mm composite diaphragm sounds Unit, which is very rare in real wireless headphones. When trends and technology are combined, we can relax a little bit of standards

In general, Buttons Air is a typical “American-style” headset, which is characterized by simple and rude direct use, like active noise reduction, App, equalizer, etc. None of the flowers and intestines, you can’t even view the headphones. Remaining power. But on the other hand, the excellent face value has helped it pull back a lot of points, of course, if you can get it to the “tidal”, so as a wearing accessory, it also has a good sound performance. And the endurance, coupled with the ingenious packaging design, is still very interesting overall.

We can see that although the trend and technology seem to be not in conflict, it is actually difficult to make color in both aspects. Most of the products that can be recognized are Apple Sony’s old brands with design skills, Buttons. Although Air has some flaws, but the design is used, I can relax a little bit in other aspects.

The last thing is hope that will.i.am will be able to get out of the sound as soon as possible and return to the style of the past.