The best thing about Ali is to keep out of the cadres. 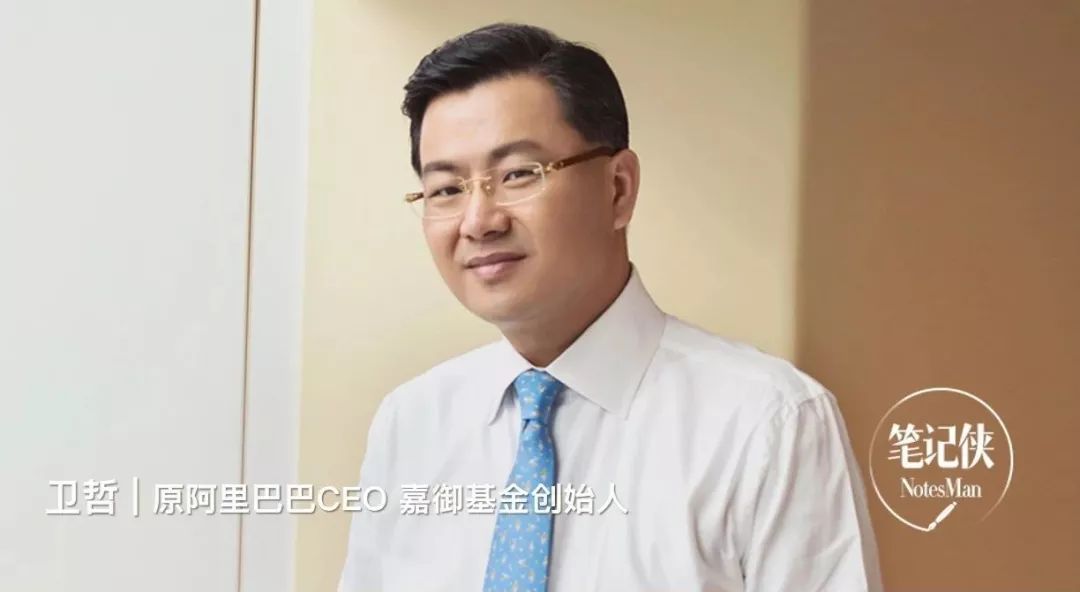 Content Source:
Part of the course content of the “Alpine University Science and Business Annual Course” is about 20% of Wei Zhe’s curriculum.

Notes invite you to think before you read:

Management is definitely science, and the core of management science is based on an understanding of human nature.

A lot of people ask, I have been with Ma Yun for so many years, What is Ma Yun’s most powerful??

Second, the essence of business.

Third, the feeling of the Internet.

I. Organizational change from historical military

1. Ali’s biggest product is to be able to work out cadres

There has been a lot of military reforms in Chinese history, and Beiyang Navy is the best example of embracing technology.

The failure of Beiyang Navy, educated a person, this person is Yuan Shikai.

Yuan Shikai proposed “Small station training“, which became the most powerful “Northern Army” in China at that time, a new organization that not only embraced technology, but also embraced the organization of the German Army. .

Ma Yun said: “Alibaba’s biggest product is to be able to go out of the cadre“, you see that I left Ali, it has no effect on Ali, but also develops better.

Ali came out so many people, Ali is still very cattle, so it is not that Ali’s strategy is more powerful, Ma Yun’s ideas are so powerful, the most important thing is that Ali can continue to cadres.

2. Change and change in the organization

The Internet is coming, what needs to change, what doesn’t change, or what commercial nature the Internet has changed, and what the Internet does not change.

In the new era organization, you can’t say that a new thing has changed. It turns out that it is good to walk, and the toddler will not walk in the end.

3. What changes in the organization of today’s era?

One is that the crowd has changed. After the team came to 95, the new crowd is a very important factor in promoting organizational change;

The second is new technology, and the new crowd is forcing us to think about what to change. 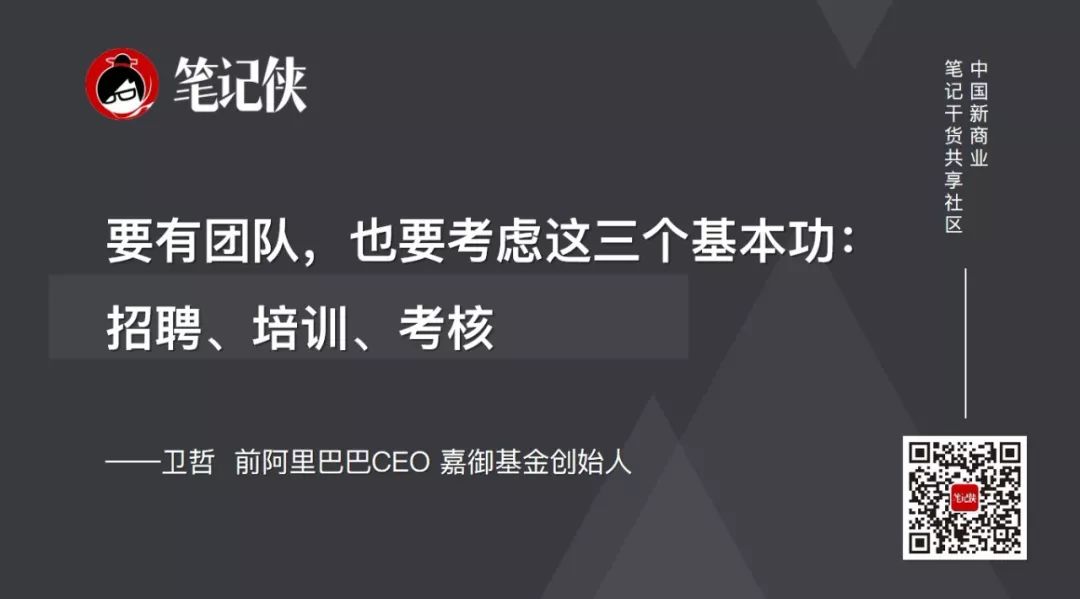 The most important basic skills, the horse step should be stable, even if the team does not reach 100 people, but as long as there is a team, we must consider these three basic skills:

The three axes of “recruitment, training, and assessment”, as well as corporate culture, mission, vision, and values, must be organized as long as they are organized.

In the PC Internet era, even if one person had a computer, there was no computer anytime, anywhere, and the man-machine was separated.

But After the integration of man and machine, you must use the method and organization before the human-machine integration, it must be wrong.

Human-in-one 1.0 mode, you don’t take out your mobile phone, mobile number, micro-signal, not facing your face, you won’t know who you are.

Human-in-one 2.0 mode, the real combination of human and machine, is based on face recognition, the mobile phone does not come out, you can know who you are.

Further, the integration of man and machine has become a man-machine. After the phone, you don’t have to bring your body, you can take your face and pay for it.

New technology is coming, how should traditional enterprises transform?

After the new technology arrives, the new retail is “four online”, and the core of the new economy is also four online. 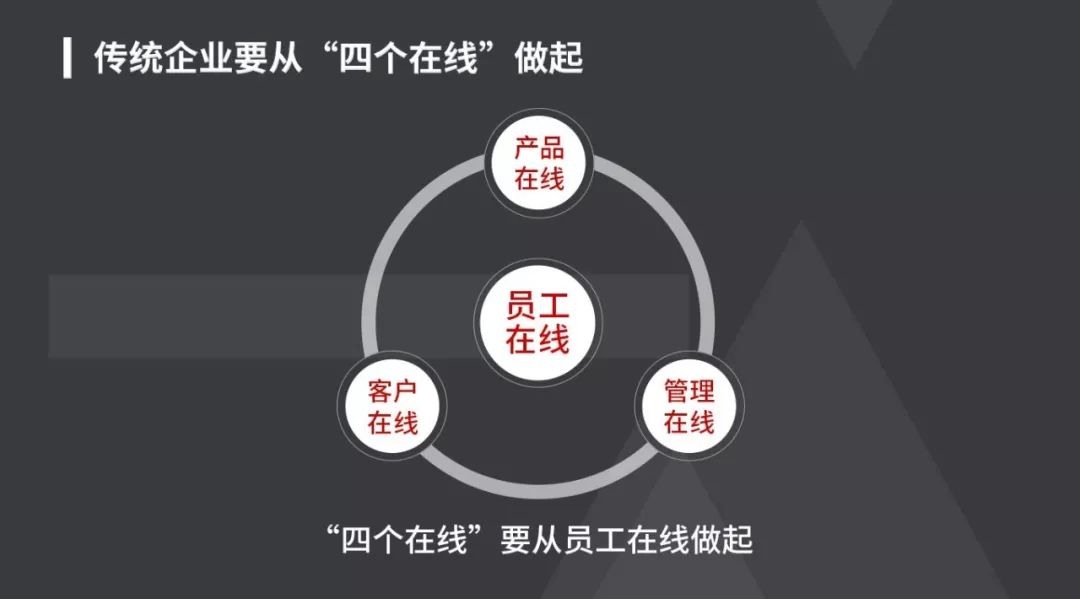 How to break through the four online cores, starting with employees online.

Products online, many companies have made a small program, APP, official website, and then put products and services to that one, you can achieve online sales, but found no one to buy online.

Customer online is how you turn your customers into e-members. When customers leave, you can also interact and call customers online.

These online, if you don’t break through from “employee online”, several other online can’t do it.

Many companies have 1 million or 10 million fans, and they don’t know how to farm.

You must assign it to everyone, called the field to the household, and the responsibility to the field, whether each employee can cultivate his or her own land.

It’s not a good model where the user experience can’t be greatly improved;

People’s effectiveness is how much each person does every day.

Being good to employees, increasing his treatment, if he can’t create greater value, how can he bring better treatment, So empowering employees is essentially reflected in his human effect.

Three, 95 after the new generation

Changes in the “Organization” and “Consumption” areas

There are three very important differences after 95.

Why should I discuss 996 recently, because now I have ushered in after 90s, 95s, and back to Ali two days ago. I also asked “Bitter and Hard” to get it. They said: “Bitter” is not much. There are more “Chou Shen”.

At the time of recruitment, we could not directly ask the interviewer whether it was a bitter and deep, and his answer was not necessarily accurate.

We have designed a lot of questions, one of which is: “How much time do you eat a meal when you were young?” We especially love people who eat a meal a month.

I asked recently: Do you still use this question for an interview?

He said: It is still used, but we use it instead, because now I am afraid to recruit people who only eat one meat a month. At such a young age, the Buddha does not eat meat and keeps health.

Now I am particularly fond of people who like to eat meat for a month. This kind of person is relatively fierce, and this may not care about 996.

There is no concept of single child 2.0 in the world.

Because China’s one-child policy began in the mid-to-late 70s, there was no brother, sister, brother, or sister in the dictionary after 85. After 95, there were no uncles, aunts, aunts, and uncles.

No, so he inherited pure assets, no debt, so the result is a generation of Chinese credit consumption.