After a series of “thunderstorms” incidents such as the arrest of executives, rent-and-loan turmoil, arrears in rent from landlords and refunds of tenants, Eggshell finally came to the stage of being delisted.

The reason for its delisting may be related to Eggshell’s failure to disclose its financial report on time. In February and March of this year, Eggshell Apartments failed to disclose some information in accordance with the requirements of the New York Stock Exchange Regulatory Authority. In addition, the NYSE Regulatory Bureau also noticed that Eggshell Apartments failed to disclose information to shareholders and the investment public in a timely, full and accurate manner.

Eggshell’s financial report still stays at the first quarter of fiscal year 2020 financial report released on June 10, 2020. The subsequent half-year report and year-end financial report were not submitted on time. At the same time, Eggshell did not give necessary explanations on the declaration of arrears.

This means that eggshells still have a year and a half to undergo a second “resurrection.” However, for eggshells, the first Chinese stock to land on the New York Stock Exchange in 2020, the resurrection may be another miracle.

01 From multiple rounds of financing to bloody listing

The eggshell, which was born in 2015, has the angel investment blessing of former LinkedIn China President Shen Boyang, and it holds the golden key of capital from birth. Just four months after its establishment, it completed a series A financing of tens of millions of yuan, and the investment institution was Kaiwu Investment.

With the influx of capital, the size of the eggshell has grown like a snowball. In 2017, there were only 8,000 eggshell apartments in the tube house. In 2019, Eggshell Apartments used a wholly-owned strategy of US$200 million (including cash and debt) to acquire Hangzhou long-term rental apartment operator Loves Rent, completing the largest acquisition in the industry at that time. Since then, the number of apartments managed by Eggshell Apartments has exceeded 400,000. At the end of 2019, there were more than 430,000 rooms.

On January 17, 2020, Eggshell Apartments was listed on the New York Stock Exchange under the stock code “DNK”. This is regarded as the highlight moment of the eggshell. The eggshell IPO price is US$13.5 per share, with a total of over 149 million yuan raised and a market value of US$2.74 billion.

Industry insiders believe that these real money votes will face “fighting” with the delisting of the eggshell. The current state of institutional investors is that they can only be “recognized.”

According to media reports, Eggshell originally planned to sell 10.6 million American Depositary Shares (ADS), each of which represents 10 Class A ordinary shares. The price range is 14.5-16.5 US dollars, the final issue price is lower than the pricing range, and the IPO issuance scale is reduced to 9.6 million.

Until it went public, Eggshell Apartments was still at a loss, and its net loss expanded year by year. The net losses in 2017, 2018 and 2019 were 272 million yuan, 1.370 billion yuan and 3.437 billion yuan respectively, and the accumulated losses in the three years were 5.079 billion yuan.

According to the unaudited financial report released by Eggshell Apartments on June 10, 2020, the company’s net loss in the first quarter was 1.234 billion yuan, and the debt-to-asset ratio was further increased to 97.06%. The unrestricted cash and cash equivalents were only It is 826 million yuan.

02 Thunderstorm under the epidemic

Six days after the eggshells hit the market, Wuhan announced the closure of the city. Under the epidemic, the eggshell, which is already tight in cash flow, burst out negative news one after another.

In February last year, Eggshell was accused of unilaterally asking the landlord to reduce rent, breaking the capital chain, and layoffs in disguise. According to media reports, the vacancy rate of eggshell houses has risen sharply to over 30% at this time.

On June 5 of the same year, the Shenzhen Special Zone News reported that the information provided by the Shenzhen Consumer Council showed that in the past three months, the Municipal Consumer Council had received 219 complaints against Eggshell Apartments. At the same time, the Shenzhen Municipal Bureau of Housing and Urban-rural Development stated that it will intervene in investigating the financial, safety, and illegal construction of Eggshell Apartments. Once verified, they will be dealt with strictly.

On the evening of June 18, 2020, Eggshell Apartments issued an announcement stating that the company’s CEO Gao Jing was under investigation. Since then, news about Eggshell’s bankruptcy has intensified, and rights protection incidents of Eggshell Apartments have erupted in many parts of the country. For a time, news of landlords collecting houses, tenants’ rights protection, employees seeking salary, and suppliers’ debt collection frequently appeared on major media platforms.

On November 16, 2020, the Beijing Municipal Commission of Housing and Urban-Rural Development stated thatA special team has been set up for Eggshell Apartments, and the Supreme People’s Court has subsequently responded to the conflict between the landlord and the tenant caused by the thunderstorm.

As of now, the share price of Eggshell has fallen to US$2.37 per share, leaving only US$433 million in market value. It only took more than a year for Eggshell Apartments to go public from the listing of scenery to successive thunderstorms, to the resignation of executives, and the company may face delisting.

03 There are still many people defending rights

Since November 5, 2020, the official WeChat account of “Eggshell Apartment” has never been updated; after November 20, the official Weibo has not been updated. The last comment on Weibo and other comment lists are all comments of the day after being screened and displayed by the blogger. Some people say “If you get through, I will continue to rent you”, and more are “daily views from users with annual fees.” “The self-deprecating ridicule. 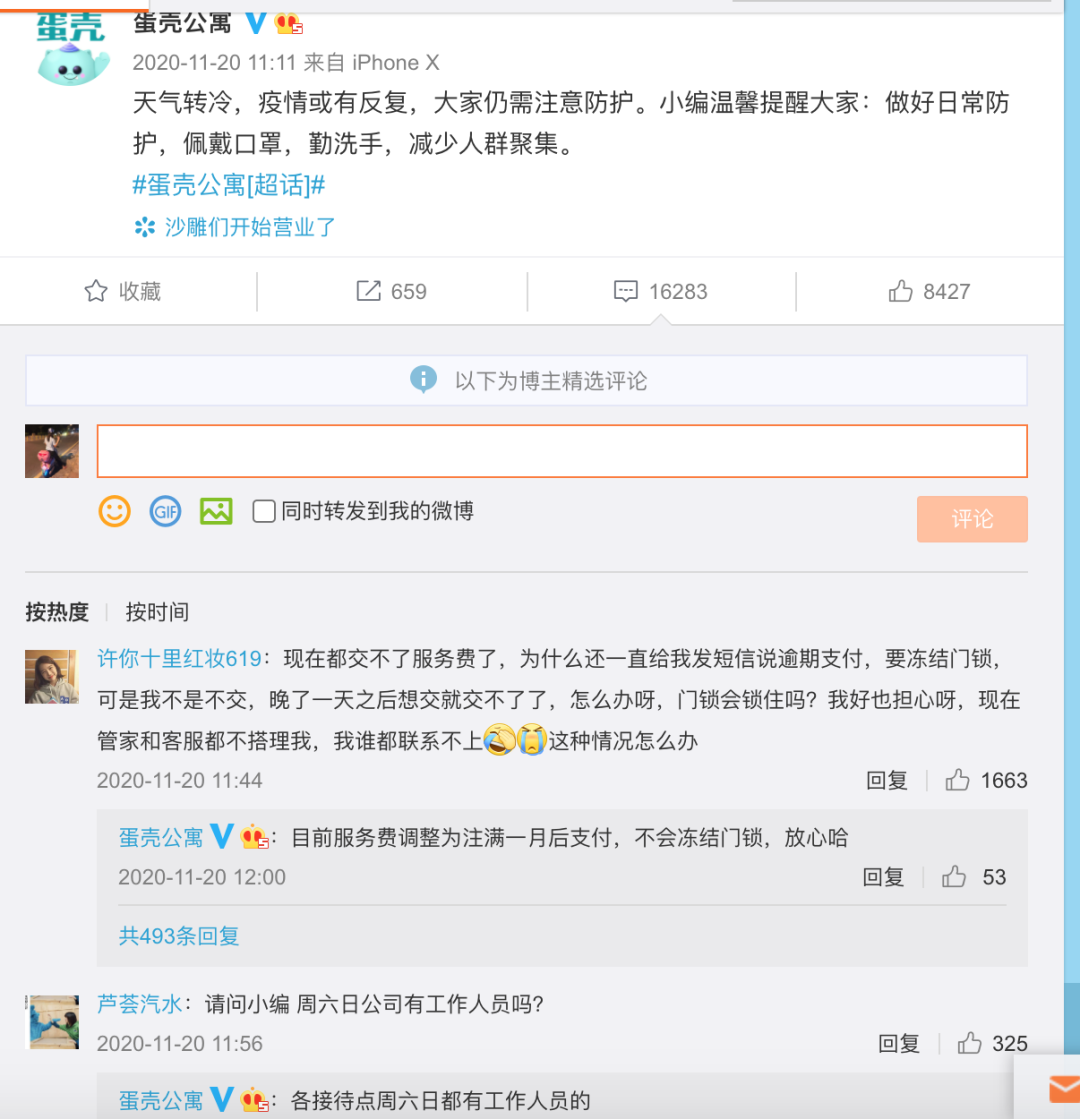 The forwarding list is mostly real-time updates from the real world, that is, a long list of tenants waiting for Eggshell to solve the problem and refund the rent.

Xiao Zhang is one of the thousands of tenants who are still defending their rights. On November 19 last year, under overwhelming negative news, Xiao Zhang decided to terminate the lease contract with Wuhan Eggshell Apartment; November 23 , The eggshell app system confirmed the rent refund settlement, and the eggshell should be refunded to Xiao Zhang with a rent of about 10,000 yuan, but to this day, Xiao Zhang has not received a refund.

In February of this year, Xiao Zhang decided to go through legal proceedings. A district People’s Court in Wuhan responded to Xiao Zhang’s announcement showing: The defendant (egg shell) needs to pay the plaintiff (Xiao Zhang) a refund of termination of the contract and interest, and the interest is self-sue From the date to the actual payment date, the monthly interest rate is 2% according to the actual calculation. Xiao Zhang’s rough calculation, except for the rent, Eggshell has already owed him nearly 500 yuan in interest and judgment litigation costs.

For this debt, Xiao Zhang does not hold too much hope that it can be recovered. The reason comes from the official document that the whereabouts of the eggshell is “unaccounted for”. On the People’s Court’s announcement, litigation concerning eggshells is notOff. The status on the court summons is basically “Because the whereabouts of the parties (eggshell apartment) are unknown, we are now publishing to you (eggshell) a copy of the complaint, the court summons and other relevant materials.” Xiao Zhang is a college student who is about to graduate. He owes the eggshell debts. He frankly said that it will take 2 months to earn it back.

As the biggest partner in the “rental loan” of Eggshell Apartments, WeBank is actually the biggest loser in this “wreck”. On December 4 last year, the “WeBank Rental Consumer Loan” public account issued an announcement stating that after eggshell rental loan customers withdraw their rent, they can settle the loan without repayment. The executives of Weizhong said that for Weizhong Bank, it is equivalent to giving up the tenant’s personal creditor’s rights and turning them into receivables from eggshells.

WeBank has become the “taker” of the stall left over from the eggshell part. According to data recently disclosed by WeBank, as of December 30 last year, 147,000 people had settled rent loans, with a total loan amount of 1.41 billion yuan, accounting for 93% of the settlement amount. Based on this calculation, WeBank’s “Treading Thunder” Eggshell Apartments amounted to 1.52 billion yuan.

Industry insiders said that they are not sure how WeBank will recover the money. As a creditor, you may consider “debt-to-equity swap”, but follow-up operations will also face major difficulties. It is predicted that the capital market will have long-term leases for investment and investment. The apartment will be more discreet.

The risk information of Tianyan Check App shows that the related company of Eggshell Apartment has multiple pieces of information on the person subject to execution, consumption restriction order and final case, and the company’s own risks are as high as 411. Up to now, only Ziwutong (Beijing) Asset Management Co., Ltd. has been executed with a total amount of over 10.9 million yuan. At the same time, the company has also refused to perform the obligation of determining effective legal documents because of its ability to perform. It has been listed as a dishonest by the People’s Court of Minhang District, Shanghai. Executor (ie Lao Lai).

In addition, eggshell apartment related companies are involved in a number of legal proceedings, most of which are housing lease contract disputes, sales contract disputes, etc. In January 2019, Shenzhen Eggshell Apartment Management Co., Ltd. was punished many times for “contract violations” and other administrative penalties; in January 2021, Ziwutong (Beijing) Asset Management Co., Ltd. “publicized corporate information, concealed the true situation, and resorted to fraud ”Was included in the list of business abnormalities by Beijing Dongcheng District Market Supervision and Administration Bureau.

Compared with eggshells, the situation of the first group of young people in long-term apartment rentals is also not optimistic.

Similar to Eggshell, Qingke Apartment’s share price also plummeted. It fell from US$17/share at the time of listing to US$2.54/share at present, a drop of more than 80%, leaving only US$122 million in market value.

At the beginning of this year, there was a major change in the management of Qingke Apartment. Five senior management including the chairman of the board of directors and CEO Jin Guangjie resigned at the same time. The announcement stated that they had resigned due to personal reasons and had no objection to the company.

According to Qingke’s 2020 financial report, as of December 31, 2020, Qingke Apartment has participated in 32 ongoing legal proceedings, most of which were initiated by Qingke’s suppliers. The total amount of claims incurred was 95 million yuan, of which 12 lawsuits claimed more than 1 million yuan.

On March 15, 2021, Qingke Apartment became the subject of enforcement again. In fact, Qingke Apartment had not refunded the tenant’s deposit before that, and the landlord received the tenant’s failure to pay water and electricity bills. After being complained by landlords and tenants, he became a dishonest executor and was restricted from spending.

Expanding losses, plummeting stock prices, resignation of executives… all this seems to be playing the same script as the eggshell a year ago.

Hu Jinghui, chief economist of Jinghui Think Tank, believes that the future development of long-term rental apartments should be a shift from “heavy to light”. Previously, long-term rental apartment agencies spent “big prices” on repossession and refurbishment, but now operators are also considering shifting to light assets. Now the market is starting to engage in light custody. The core difference between “heavy” and “light” lies in the decoration. The money for the renovation is transferred to the owner, and the operator only provides the renovation supply chain or supervision.

In addition, as the Ministry of Housing and Urban-Rural Development in Beijing, Shanghai and other places expressly stipulated that companies are prohibited from forming capital pools and rent loans, and under strong supervision, the entire market will be more rational and standardized. But in the short term, the big problem facing long-term rental agencies is that the landlord’s trust in long-term rental operators has been greatly reduced. 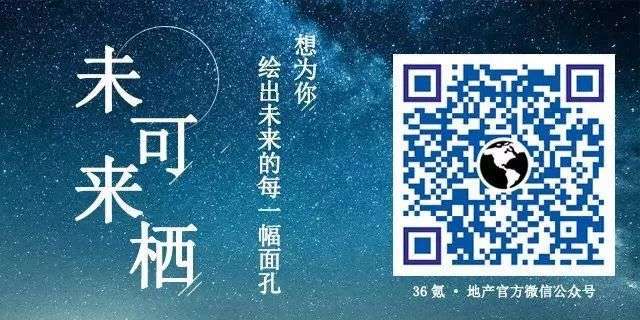 Scan the QR code to pay attention to the future habitability