Flower drum pass of the game 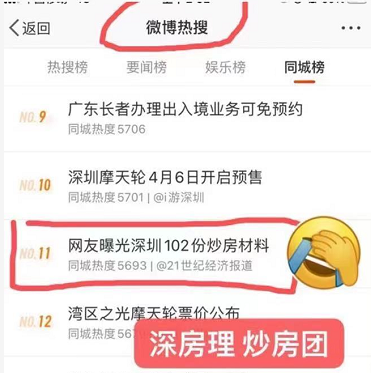 Report “There are more loans under his name that are also used for real estate speculation. If you need more detailed information, please contact me by private message, please check carefully.”

The heavier ones are behind.

On the 4th, a long and eloquent picture was posted on Weibo. According to the blogger @深房理装饰队003, this is 102 copies of materials for real estate speculation by members of the cradle of Shenfang Li! 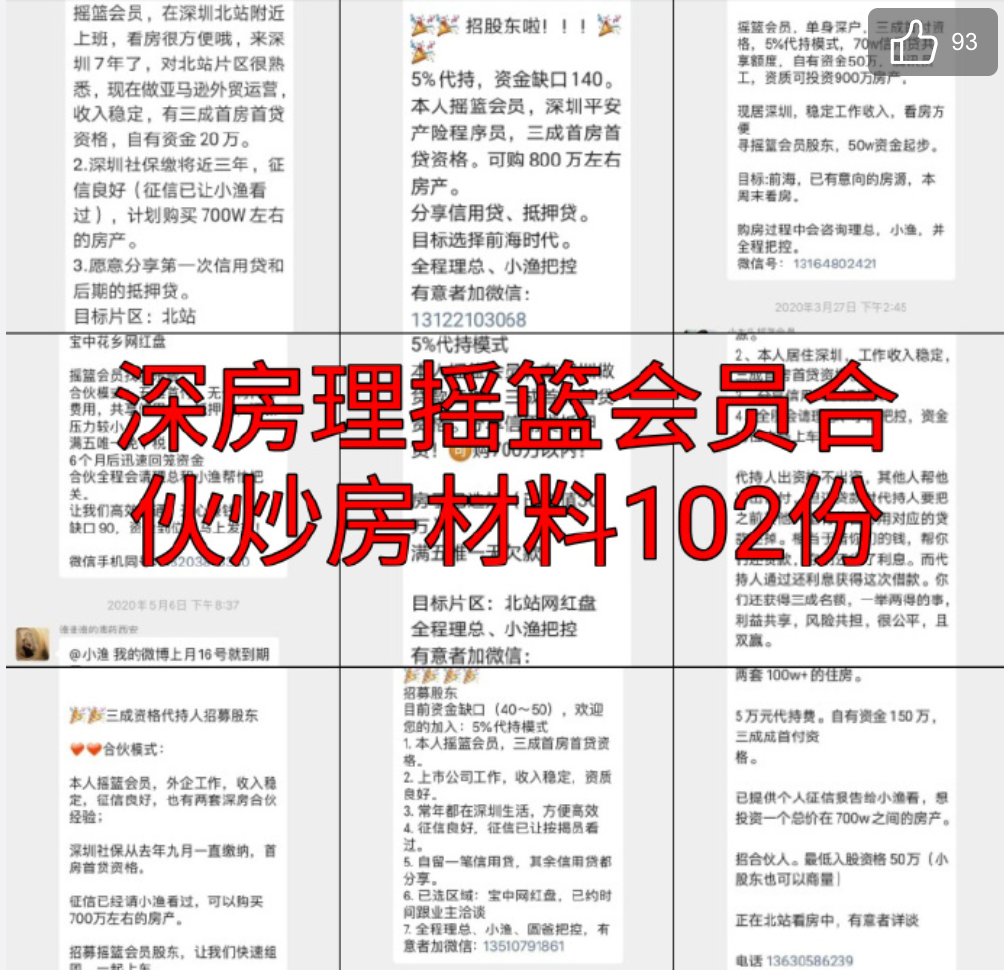 It is understood that the blogger @深房理装饰队003 is a Weibo user who continues to speak out for the victims.

Under his Weibo, there are full of exposing the contents of Shen Fang Li’s leading real estate speculation..

Shenfangli’s practice of real estate real estate partnership has been reported many times by the official media, but it is said that not only did not affect the operation, but the media helped to expand their popularity and brought them more business.

Just yesterday, we also saw a house in Kaisa’s Qianhai Plaza being auctioned.

What is this concept?

Furthermore, according to the ruling, the house was put up for auction because the owner’s capital chain broke and the house was sealed by the bank.

Recently, there is a picture on the Internet that has been very popular, calling on the people of Shenzhen to stay away from the “killing pigs”. Among them, Kaisa Qianhai Square is listed! 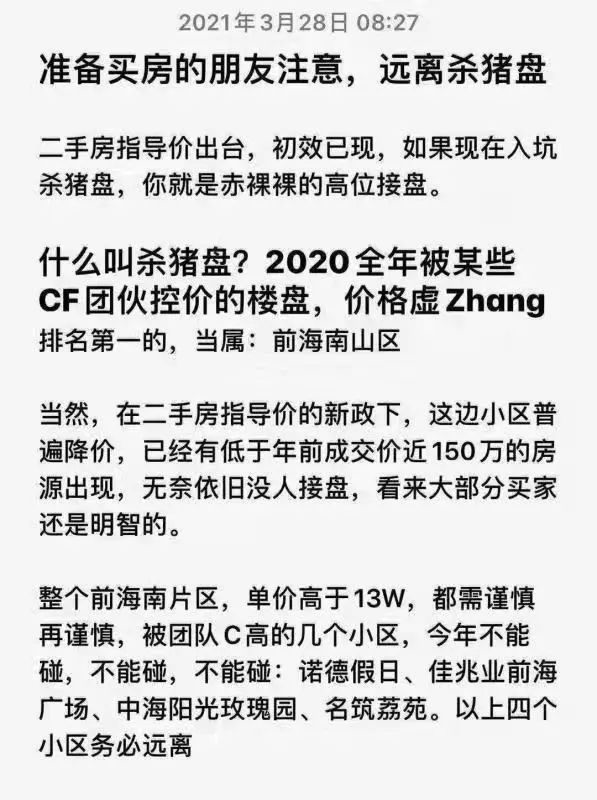 And the four Qianhai dishes that were very hot last year mentioned in the screenshot, including NordThe property prices of Holiday Garden, Kaisa Qianhai Plaza, Zhonghai Sunshine Rose Garden, Mingzhu Liyuan, etc. have soared last year, and there is a deep house management behind them.

What kind of organization is Shenfang Li? We can take a look at some of the content posted by Weibo user @深房理.

“If the time is long enough, most of the mortgage and debt will not be repaid.”

“In the long run, real estate speculation will make house prices cheaper in the future.”

His organization advertises that as long as you become a “cradle member”, there will be special docking services from settlement, house purchase quota, house selection to finding small loan companies to advance funds, etc., encouraging people who don’t have money to use loans. , Hype real estate.

Real estate speculation without money is like a sourceless water that always runs out. Last year, we also reported the thunderstorm of Sister Crab (click to view), which caused a storm in the city last year. It was directed by Shenfang Li.

Sister Crab didn’t have enough money for one, and no quota. She wanted to buy a house in Shenzhen, so she joined the Cradle Member. Under the guidance of Shenzhen Housing Management, fake marriages with members of Shenzhen households, all together to find small loan companies to advance funds, bite the teeth and buy a 49 square meter small apartment in Qianhai Times, with a total price of 7.28 million.

According to the plan, she was able to get a red capital to engage in business loans to close the funding gap, but she did not expect a policy surprise, and she was severely embarrassed by the strict inspection of business loans. She couldn’t get the business loan, and she no longer trusted the rescue of Shenzhen Housing Management. The fund chain was completely broken. In the end, the house could only be sold for auction, and she lost more than 2 million yuan before and after.

When I stepped on the market recently, the agent in Qianhai told me that the 48-square-meter and 66-square-meter small apartment of Noord Holiday Garden, because the total price is relatively low, and it is the school district room of the famous school Nanshan Experiment. Last year, it was favored by the real estate group. ,almostIt is selling one set.

The most exaggerated thing is that Noord Holiday Garden’s 66-square-meter small apartment, last year all the way from 7 million, 8 million to 11 million! An increase of more than 50%!

The Zhonghai Sunshine Rose Garden and Mingzhu Liyuan are also hyped up.

According to reports, the basic operation of the members of Shenzhen Housing Management is to take a few houses with a total price of less than 10 million in the community, and raise the price, so that every new house sold is higher than the previous one. The transaction in the community is very busy.

But in fact, a discerning person can understand at a glance, playing a game of drumming and passing flowers. Therefore, these real estates that were held by real estate speculators are now called “killing pigs” in the industry.

The introduction of the guide price interrupted this game of drumming and passing flowers.

We went to Qianhai these few days and found that Qianhai, which was hot last year, has been completely cold since we came back after the new year.

Zhongyuan’s intermediary said that the total transaction volume of second-hand houses in Qianhai in March is estimated to be less than 15 sets. Looking back on January, 80 and 90 sets were still sold. He sold 3 sets in the same month alone.

Take Qianhainan as an example. Although there are transactions when they come back after the year, the number is very small, and the transaction can only be done if the owner cuts the price.

“Shanhai Cuilu sold a set with a listing price of 12.8 million, but the price was reduced to 12.5 million before the transaction was sold, which was a drop of 300,000.” Little Brother Lian told me.

As for the demons, they are facing the dilemma that it is difficult to sell at a price reduction.

The little brother said, “Noord had a lot of deals before the holiday, but there were no deals when they came back after the year.”

The record time for a set of transactions in the Nord Holiday Gardens stays on January 23, 2021.

The market is very cold, but the owners of NORD are quite sturdy and basically did not reduce the price. Instead, most of the owners have increased a bit. For example, the current minimum price of 48-square-meter listings is 8 million, while the lowest at the end of last year was 7.5 million.

But there is a signObviously, the owner’s psychological price has been loosened!

Little brother said: “You can still cut some prices in actual talks, mainly depending on the down payment cycle.”

The previous strength of the owner is no longer. The intermediary said that the situation a year ago was that if you think you can see the house today, you have to start, or you may be bought by someone the next day, and you have to look for a house again.

The speculators of Nord Holiday may not admit defeat, but some owners in Qianhai have already cut prices, mainly the “killing pig plate” mentioned above:

Kaisa’s Qianhai Plaza has a suite a one-time reduction of more than 1.2 million. Some insiders believe that the price is actually very cost-effective after the price reduction, but no buyer has ever sold it;

Mingzhu Liyuan has a three-bedroom house. After the New Deal, the price was cut twice, about 600,000 yuan off, but it still can’t sell…

It is still unclear whether this is a real estate speculator or a resident selling a house, but judging from the current situation, the Qianhai property market cannot attract buyers even with price cuts. It is really miserable.

But it also shows from the side that the impression that Qianhai’s house prices are currently overvalued has been deeply rooted in people’s hearts.

Nowadays, when various kinds of loans such as business loans are tightened, as long as banks draw out loans, or banks do not renew loans when they expire, it will become more difficult to use loans to support loans.

Just like the house in Qianhai Plaza of Kaisa that was auctioned off, listings that were auctioned off because they couldn’t repay the mortgage may still appear later.

When Shenzhen introduced second-hand housing price limits in February, I said, As long as banks strictly follow the government’s guidelines for loans, housing prices in Shenzhen will definitely drop.

The property market is essentially a game of leverage, especially in cities like Shenzhen that like to use leverage to the extreme. Once the leverage is tightened, it will be difficult not to loosen housing prices.

Now it’s not just Qianhai housing prices that are beginning to loosen. Some of the older houses, such as the traditional mansion area of ​​the OCT East and West Group, are mostly old houses with poor schools. They are mainly tenants, and their ability to withstand pressure is not so strong. It will drop more.

Of course, many investors are still carrying it. After all, the restricted sale of admission in 2020 will not be sold. If it is the first half of last year, don’t worry too much. It is difficult for house prices to fall back to the level of the first half of the year. Entering the market is troublesome. If banks continue to implement the government-guided loan policy, they may not be able to keep their capital.

For just needs, you can buy new houses at any time, and second-hand houses wait for a fall. If you don’t fall, don’t buy. The next two years are a good time to pick up bamboo shoots.