Q1 is over, and the drama market is showing a lot of new things.

First of all, in terms of quantity, as of the end of March, the total number of Q1 online dramas has reached 148, including 118 online dramas and 30 TV dramas, which is an increase from the total number of last year. Among them, there are 8 self-made dramas on video platforms such as “Spirit Realm”, “Glory Ping Pong”, “Let’s Love Dimples”, and “Deep Breathing Together”. There are a total of 32 dramas based on IP adaptations.

In terms of genre, Q1 episodes are constantly being upgraded, and further refined genre tags such as new women, new martial arts, and family portraits in ancient costumes continue to appear. Costume dramas as a whole present the characteristics of high popularity and uneven reputation. From “Shangyang Fu” to “The Great Song Palace Ci”, the leading female costume dramas still show high popularity on the screen, and “Brilliant Heart Like Jade” is also adopting characters The group portrait explores the new direction of the costume family drama, but the costume heroine drama is obviously no longer a panacea, and the hot broadcasts of “upstarts” such as “Zuo Son”, “Douluo Dalu” and “Sito” are another kind of hits. A sign of the rise of genre dramas.

On the other hand, many major themed TV dramas such as “Mountain and Sea Situation” and “The Awakening Age” have received both ratings and word of mouth, and high-quality and stable realism dramas still dominate the market. The two-male lead drama “Shanhe Ling” is the well-deserved “king of traffic” in the Q1 drama market. In addition, the urban military emotional drama “You are my city camp” unexpectedly Xiaohong, also fully demonstrated the operating direction of the composite theme: realism must be true, and good people are kings.

Q1, the entire drama market has a variety of genres and various themes, and the quality and reputation have been improved.

As a genre, the Q1 drama market is naturally indispensable for costume dramas. The hits of drama series such as “Zuo Son”, “Douluo Dalu”, “Shanhe Ling” broke the “curse” of male IP Yipu, and succeeded in reviving the costume drama, and the IP adaptation may become the biggest winner among them. 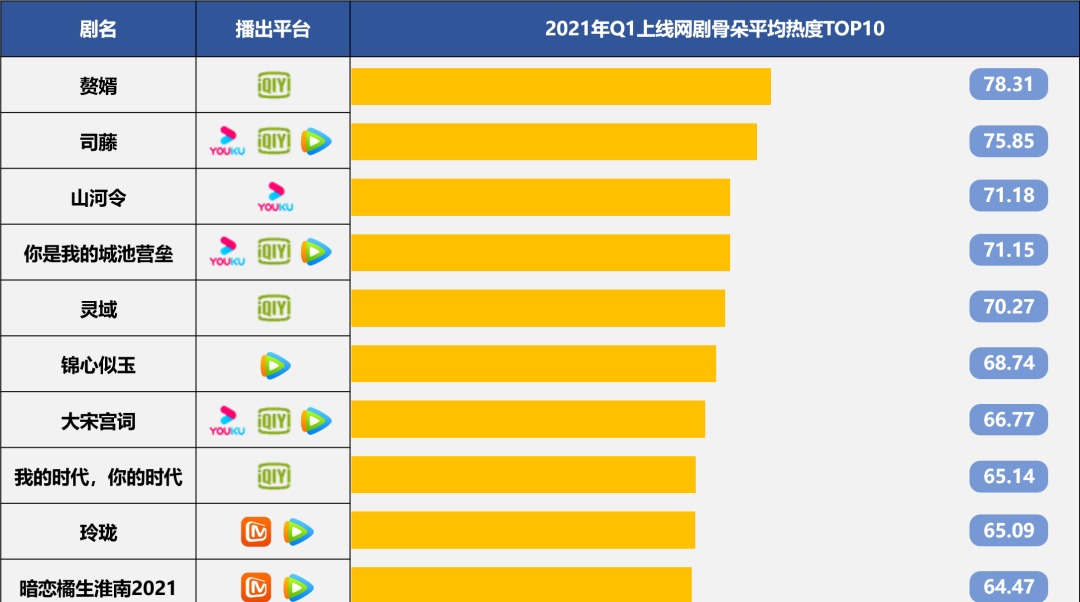 According to Gu Duo’s data, in the Q1 online drama popularity TOP10, “Zuo Son” reached the top with 78.31 popularity, “Sito” followed closely, and the other three TOP5 “Shanhe Ling” “You are my city fortress” and “Spirit Realm” are not much different, and the dispute between bg and bl is quite fierce.

From the list, we can see that in terms of genre, ancient costumes are still the big head, and the five dramas are basically well-known. Except for the controversy when “Da Song Gong Ci” was launched, I don’t know if it can be transferred in the future; on the keyword, “Sweet love” is enough to summarize the wind direction of Q1. Whether it is Uncle Ning and Ms. Song, Captain Xing and Dr. Mi, E-sports CP Wu Baiaiqing, Hou Ye and Eleven Niang, as well as the hot vine you and Langlang nails, they have joined forces. Love keeps dominating the screen.

In terms of specific data, the “sweetness” characteristic of the online version of “Zuo Son”, which is adapted from the novel of the same name, is obvious. Modern elements such as male durban, teamwork, and short-selling arouse discussion, and the status of women, marriage, Modern topics such as entrepreneurship were interpreted and discussed.

According to data from Guduo, during the broadcast of “Zuo Son”, it occupied the TOP1 seat of Guduo’s online drama list for a long time. During the beginning of the broadcast, the two leading actors Guo Qilin and Song Yi were among the top three on the screen. 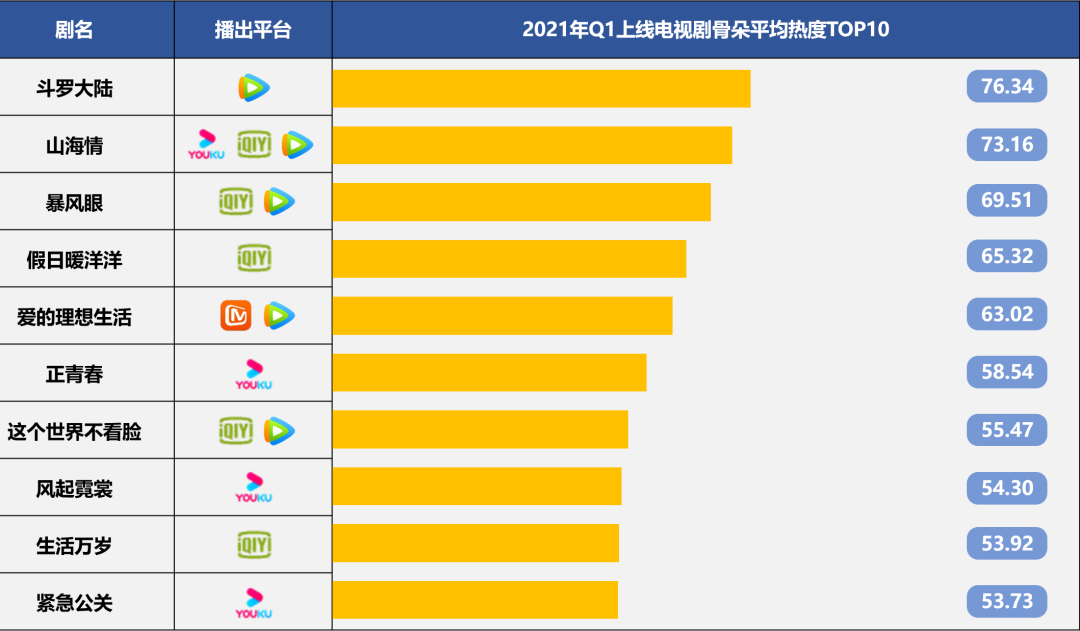 The other two male-frequency IP “Douluo Dalu” comes with its own traffic physique. As of press date, “Douluo Mainland”, the cumulative number of Tencent videos played has exceeded 5 billion, and it ranked first in the top 10 TV series with an average popularity of 76.34. It is reported that “Douluo Dalu” will soon be broadcast in South Korea, and the popularity of starring Xiao Zhan is still growing, gaining more attention from foreign fans. 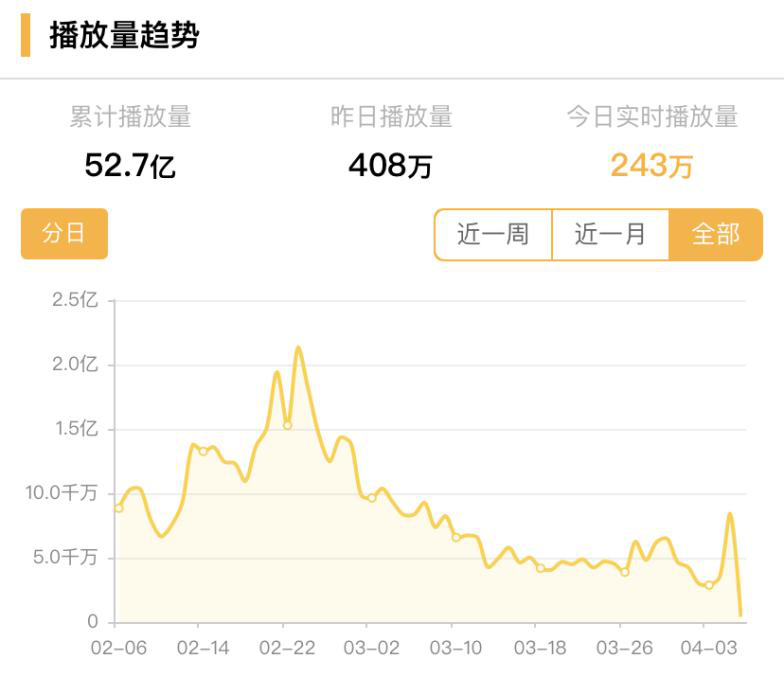 “The Order of Mountains and Rivers” showed a trend of dark horses. Douban scored 8.1 and went all the way, finally getting a high score of 8.6.Compared with male and female audiences, “Shanhe Ling” attracted 78.97% of female audiences. It can be seen that its success proves that male channel IP uses story differentiation to identify the current target audience and aesthetic needs. 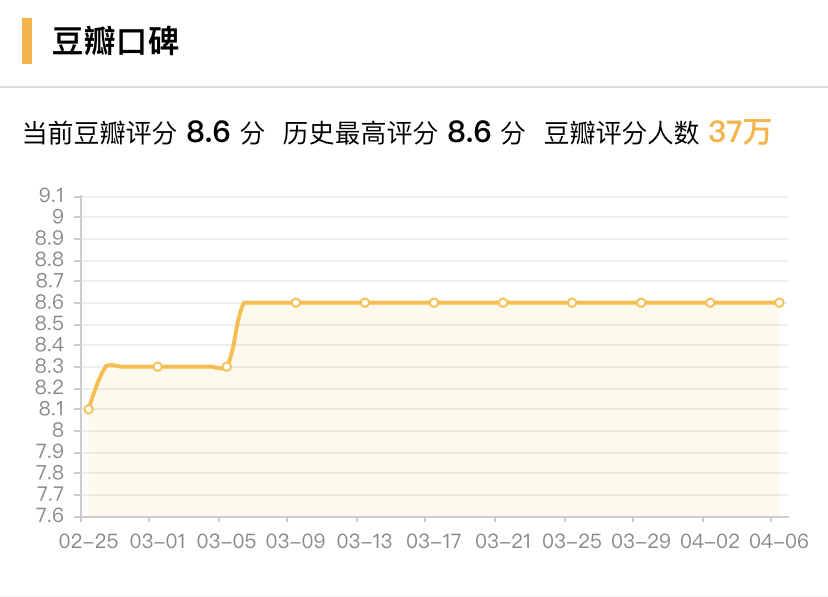 It is worth mentioning that “Douluo Continent” and “Shanhe Order” are also good at using their own IP to develop peripheral industries and continue to drive fans’ krypton gold capabilities. 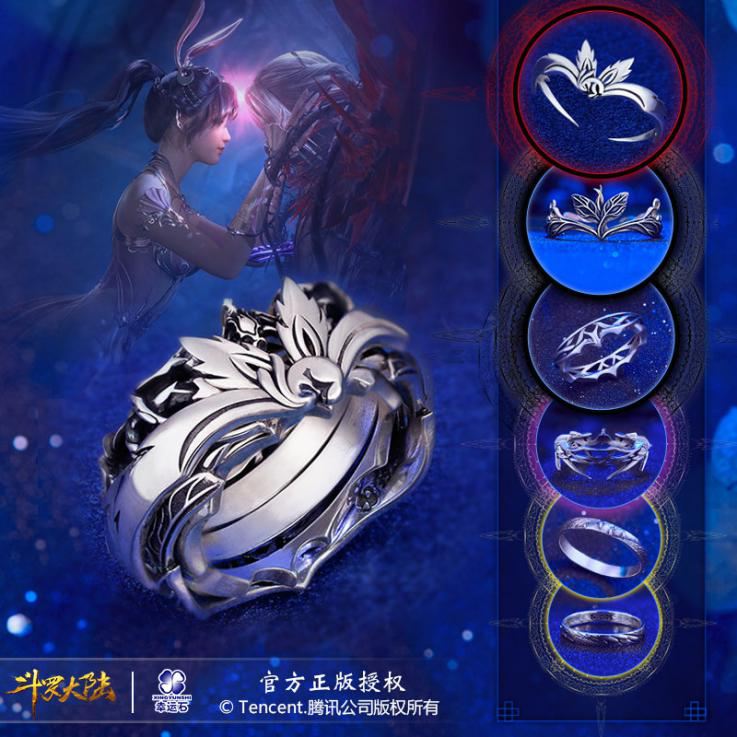 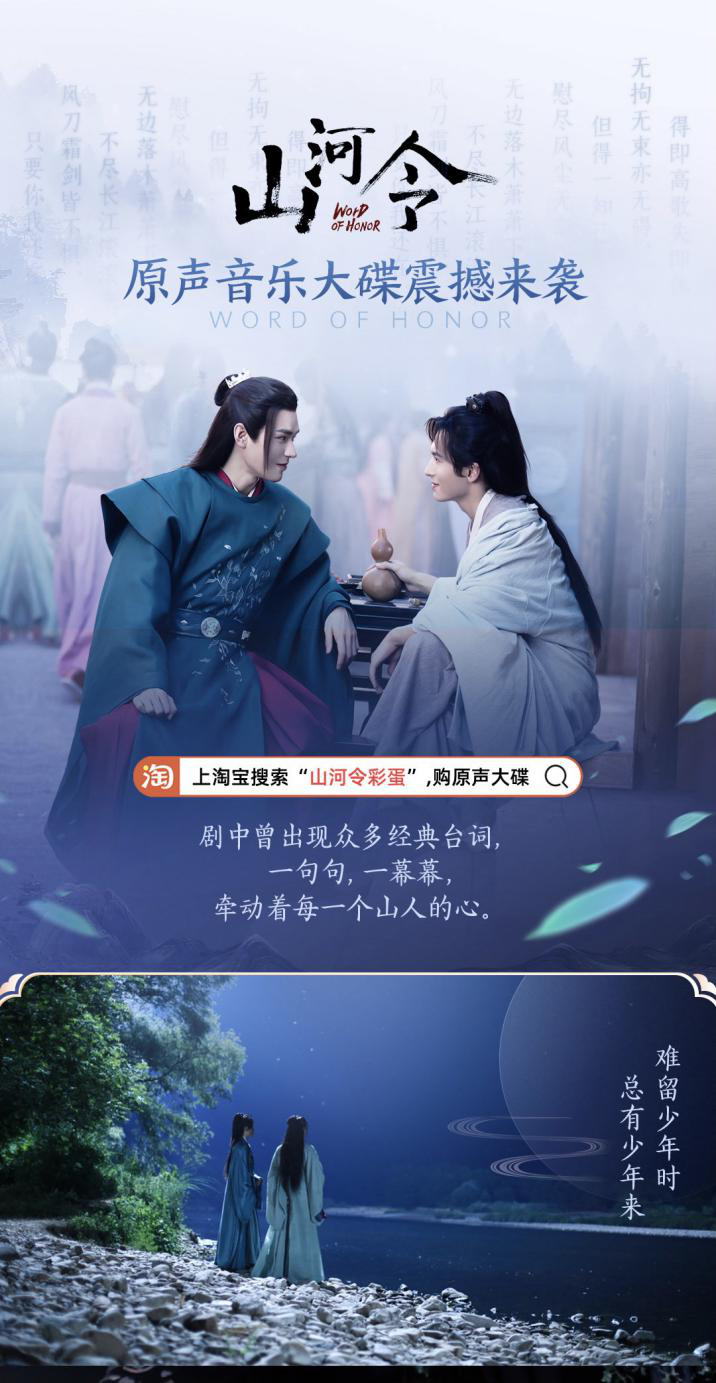 In terms of major female lead dramas in ancient costume history, “Shangyang Fu” and “Song Gong Ci” showed the audience the sophisticated production level and strong production team. During the broadcast, there were constant Weibo topics about the lead actors Zhang Ziyi and Liu Tao , But on the other hand, due to the strong contrast between the audience’s initial high expectations for the powerful actors and the audience evaluation after the broadcast, coupled with the routine Mary Su plot, the two dramas did not obtain satisfactory ratings.

Another surprise IP adaptation comes from the novel “Half Demon Si Teng” by the tail fish. The drama “S Teng” is a happy pairing of “Female A Male O” by breaking the traditional main female lead drama series. Judging from the overall trend of the Guduo Index, the play also showed a steady upward trend.

Comparison of the comprehensive potential of “Si Teng”

In general, Q1 costume dramas are showing a warming trend. IP adaptations are combining the tastes of different audiences and finding new ideas for adaptations. Dazzling dramas have achieved good reputation and popularity.

The realism theme has a solid reputation

In the top10 TV drama hot list, there are 8 realist themed dramas, which respectively involve age, history, workplace, family, city and other genres. The high-scoring dramas in Q1 also originated from realist dramas. The high scores of “Mountain and Sea” and “The Awakening Age” with high scores of 9.4 and 9.2 can be said to break the audience’s inherent impression of works of this kind. The high-quality creation reflects the reality and keeps up with the times, breaking through the circle of acclaim.

Under the golden signboard of the noon sun, “Mountain and Sea Love” did not disappoint the audience. The show successfully restored to the audience the immigrants who moved from Xihaigu, Ningxia to Yuquanying, with a true and vivid portrayal of the times and the rhythm of catching people. A piece of historical story. The performance of the three generations of actors, old, middle and young, made the show shine with dazzling stars. The depiction of the details of the characters in the play and the depiction of the background of the times have become the key to “Mountain and Sea Love”. 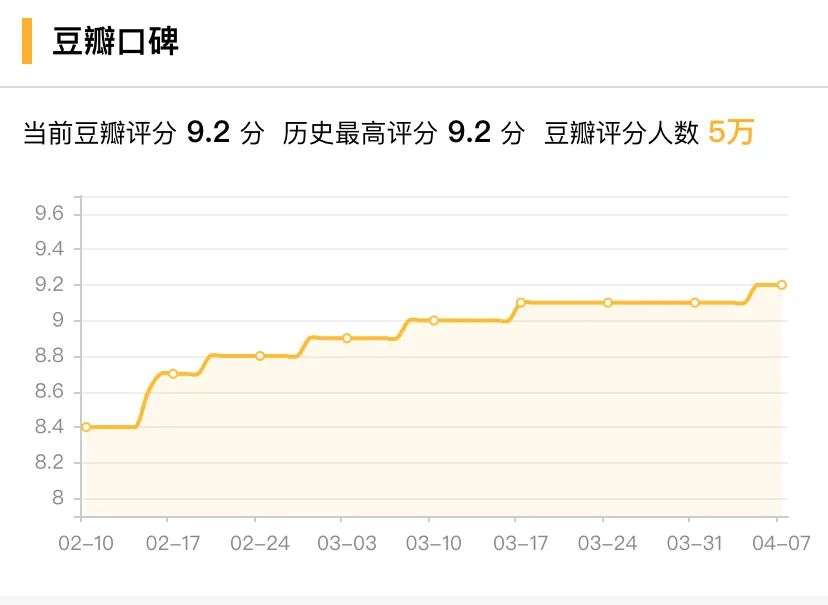 The historical drama “The Age of Awakening” shows the audience the glorious history of the Chinese Communists in a multi-line and narrative manner. The various explorations and ideological confrontations of many historical figures to find a way out for old China are the highlights of the series, and the Douban score has risen from 8.4 to 9.2.

On the other hand, Special professional drama series also ushered in a new look. The contemporary Guoan urban anti-spy drama “The Eye of the Storm” boldly uses traffic stars to appear, creating a youthful fashion and also from the perspective of modern national security. The drama has always been very popular.

“You are my city camp” barrage word cloud

The love story between the SWAT elite and the doctor brought a different chemical reaction to “You are my city camp”. Although the characters of the cold-faced SWAT male and the warm and enthusiastic female doctor are not new, the two starring actors The performance of Bai Jingting and Ma Sichun with a little character made this drama harvest 85.78% of the female audience. “You are my city camp”, known as the “earth version” and “Descendants of the Sun”, has made a bold fusion of idol stars and realism, and the sweetness of the play adds to the original heavy military elements. Sex, also seeks a new type of exploration for the production of such dramas.

Landing reality is the key to the success of realistic dramas. On this basis, seeking breakthroughs and innovations in genres is also the reason for the high scores and attention paid to realist dramas in Q1 episodes.

Actors and characters empower each other, and the high popularity of the drama will naturally increase the popularity of the actors, and Q1’s several hot dramas also directly drove Guo Qilin, Song Yi, Gong Jun, Zhang Zhehan, Jing Tian The popularity of Zhang Binbin and others. “Zui Son” has repeatedly placed Song Yi and Guo Qilin in the top two positions on the list. Gong Jun and Zhang Zhehan made the first shot of “Danchang 101”, and “Shanhe Ling” allowed them to directly welcome them. Here comes the triple jump, becoming the most popular actor on the drama market in March.

And what is pleasantly surprised is that in addition to the popularity of the two male protagonists in the Q1 series, several dramas such as “Sato”, “You Are My City Fortress” and “Jade Hearts Like Jade” have come out of the siege. , BG Light also regained the audience’s love. 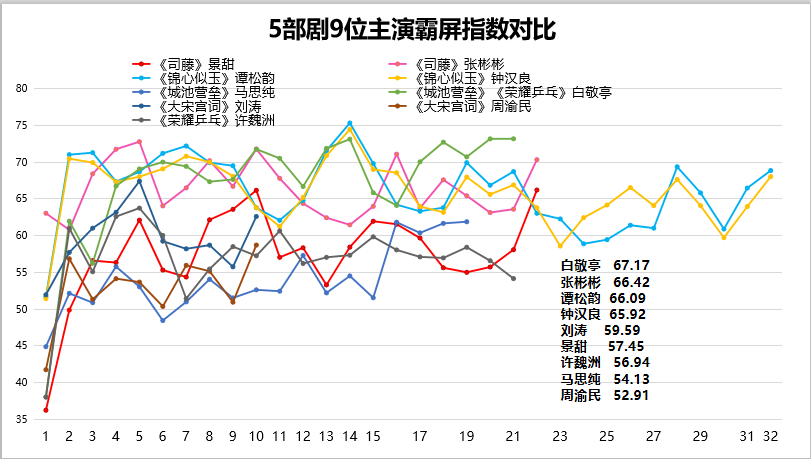 For this, GoodotIt is intended to compare the popularity of several starring actors in the dramas such as “Siteng”, “Brilliant Heart Like Jade”, “You Are My City Camp”, and “Dong Gong Ci”. It is not difficult to find that the aforementioned popularity has been affected. The enthusiasm of Tila’s actors is very stalemate, and the heat during the broadcast did not make much difference. With the popularity of the drama, the popularity of several starring actors has shown a curve upward trend. Bai Jingting is slightly ahead with 67.17 heat value, ranking first, followed by Zhang Binbin with 66.42 heat value. Tan Songyun and Zhong Hanliang followed closely. 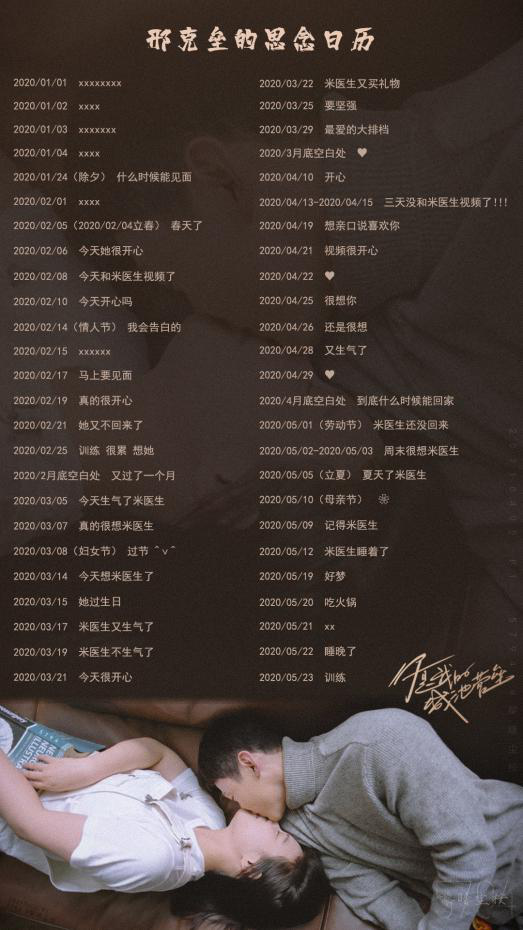 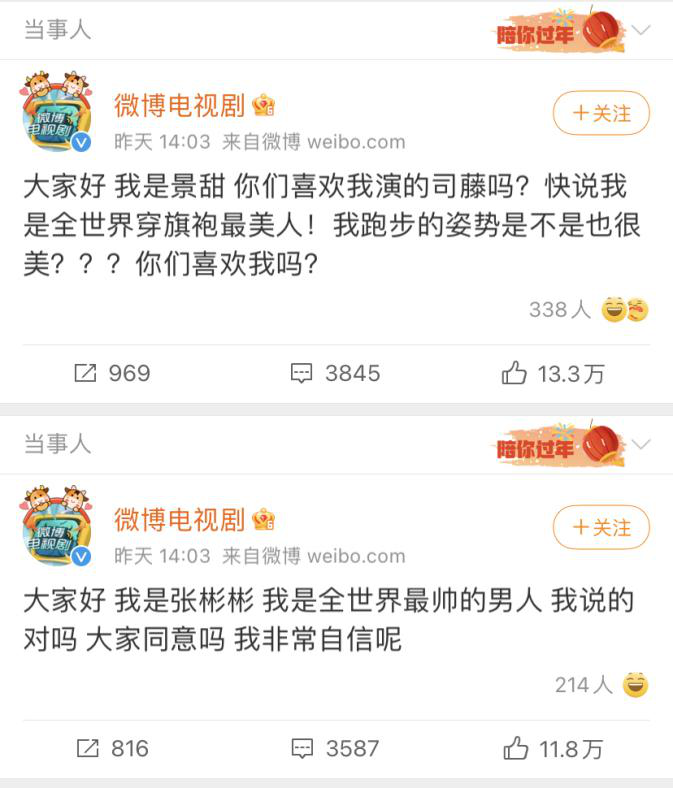 Since the broadcast of “Siteng”, Jing Tian and Zhang Binbin’s rankings in the Guduo artist rankings have been rising, especially the starring Jing Tian. Although its popularity has not surpassed Tan Songyun, Liu Tao and others, Jing Tian’s popularity has increased. Speed ​​can be said to be the fastest among the leading actors. When “Si Teng” ended, #景甜张彬彬互发微博# was on the hot search, and the live broadcast of the combination of “Wonderful Teng You” was also loved by a large number of viewers.

And Tan Songyun and Zhong Hanliang’s enthusiasm and fan stickiness have always been very good. During the broadcast of “Brilliant Hearts Like Jade”, #徐令宜十一娘今日尊面了吗# #谭松韵脸圆不就是我好拿打# and other topics Keep on top of the hot search.

In general, Q1’s costume and reality dramas all have surprise works. Entering Q2, satellite TV dramas enter a more fierce competition. “Little Willing”, “Trumpeter in Place”, and “Rational Life” “” and other dramas have conducted in-depth exploration of realist themes from different dimensions of family, military, and city, and are expected to produce outstanding works.