Edison was not only the king of invention, but also a great merchant.

The Translation Bureau is a subordinate translation team, focusing on science and technology, business, workplace, life and other fields, focusing on introducing foreign new technologies, new perspectives, and new trends.

Editor’s note: Edison is remembered as the “king of invention”. But in history, he was not only an inventor, but also an excellent investor and business man. Just one example can illustrate: While he led the team to overcome the filament problem of incandescent lamps, he set up his own power company, because he knew that if you want to promote incandescent lamps to thousands of households, everyone must first be able to use them. Power-on. How to have a business vision like Edison? The author gives his own summary in the article. This article is from Medium, author Joseph Mavericks, and the original title is “How to Be a Visionary, the Edison Way“.

“Mr. Edison, in the past few days, what is it like to try to light an incandescent lamp but fail a thousand times?”

This is 1879. Thomas Edison held a press conference in his Menlo Park laboratory. He just invented the incandescent light bulb with commercial value, and began to make ambitious plans for it.

He added a very famous sentence: “We will make electricity cheaper, and in the end only the rich will light candles.” In the year before he did the show, he founded the Edison Power Company, the company It was later renamed General Electric, and it is still one of the largest listed companies in the world.

Thomas Edison is famous for his many inventions, the most famous of which are the telegraph and the incandescent light bulb (as we will see below, this is actually the result of collective wisdom, not the result of individual labor). At the same time, he is also an outstanding businessman. In his life, he participated in the founding of 14 companies, personallyNet assets are estimated at 170 million U.S. dollars (data calculated after inflation).

Edison is a visionary, an entrepreneur who will consider and plan from multiple angles: he not only knows how to make revolutionary inventions, but also knows how to transform them into commercial interests.

In this article, I will share five business strategies learned from Thomas Edison. I’m not talking about quick business training here, there are some strategies you may have heard before. I hope that whether you consider yourself an entrepreneur, an inventor, or both, these strategies will help you stay motivated.

1. Increase your vision tenfold and work with the right people

While Edison and his team were developing commercial value for incandescent light bulbs, he himself founded the Edison Power Company. His goal: to get as many light bulbs into American households as possible. The first thing he needs to do for this is to ensure that these households have electricity available.

In order to realize this new project, he partnered with some of the great financiers at the time-John Pierpont Morgan (JP Morgan, later founded JP Morgan Chase-Translator’s Note) and Spencer Te Spencer Trask. The effect is obvious: Edison Electric eventually developed into General Electric, and it still exists today.

In 1880, Edison appointed the famous electrical engineer William Joseph Hammer as the chief engineer of the Edison Electric Light Factory. In the first year under Hamer’s supervision, the factory produced 50,000 light bulbs. Edison believed that Hammer was a pioneer in this industry, just as many people believed that Edison was the hidden pioneer behind this industry.

In 1885, nearly 10 years after expanding his factory in Menlo Park, Edison decided to build another factory in Fort Myers, Florida. He bought 13 acres of real estate and collected $75,000 for various facilities. Who did he complete this project with? The opponent is the business legend Henry Ford (Henry Ford), the founder of Ford Motor, and Harvey Firestone (Harvey Firestone), the founder of the first global car tire manufacturer.

These three examples of partnerships show that Edison had an outstanding talent for identifying and cooperating with the “right people” (at least as far-sighted people as him). Moreover, such cooperation usually develops into true friendship. Henry Ford, Harvey Firestone, and Edison are often seen walking together in the Fort Myers compound. 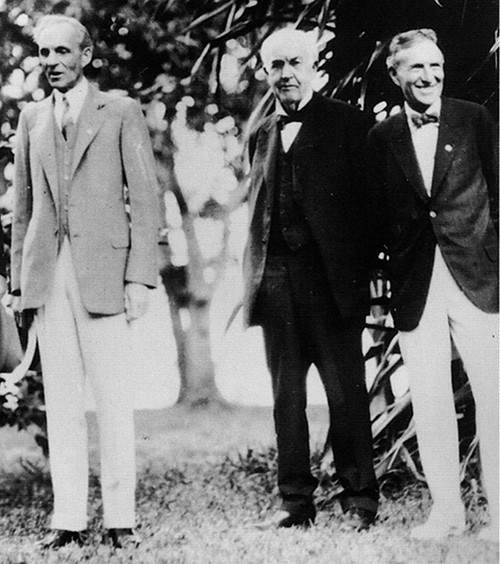 Many losers in life are actually people who don’t realize how close they are to success.

During his life, Edison opened a total of three large experimental studios to host his research work. He opened 14 companies, applied for and obtained 1903 U.S. patents… and he will go all out for the next big thing he thinks is important.

The greater the number of generations and iterations, the greater the chance of success. In any case, success is not the goal of one thing, and moving from one project to another is equally exciting. The process of creation will expose you to various fields, and you can get inspiration from it and create more. Ultimately, you must eliminate some of the confusion caused by the replacement project—as Edison did later.

He holds 1903 patents, but he did not commercialize all of these 1903 patents. He is good at distinguishing what works and what does not work. Just as he can find out which material can ignite an incandescent lamp through a lot of experiments (many other scientists have failed in this field before), he knows when to continue working hard and when to give up.

3. Don’t be satisfied with what you have already achieved

Our biggest weakness is to give up, and the way to ensure success is to “try again.”

Edison worked for the Associated Press Bureau News Agency when he was 19 years old. He had purposely requested the night shift because he wanted to spend more time on two things: reading and experimenting. In the end, he was fired because he accidentally spilled sulfuric acid on the floor during the experiment. But this incident did not stop Edison from experimenting, and he even thought that he had more time to invent and create.

Ten years later, in 1976, he established his first laboratory in Menlo Park, New Jersey. After another ten years, the laboratory continued to expand and eventually occupied two complete blocks. This is a very large-scale laboratory. In his own words, it stores all the imaginable materials and can do all kinds ofType of experiment.

Edison likes to hang the words of Sir Joshua Reynolds in different rooms of the laboratory: “There is no expedient way to escape real labor.”

This is the truth that many entrepreneurs know that money makes money, but not everyone is willing to follow it. With the expansion of the company’s business, various costs and expenses are also expanding, which is something entrepreneurs are trying to avoid. But the reality is that you need to plan for the long term.

Take Edison’s first important transaction as an example: the four-work telegraph. After he sold it to Western Union Telegraph at a price of $226,000 (inflation-calculated data), he immediately used the money to invest in the construction of the Menlo Park laboratory mentioned above. Edison’s most famous (and most commercially valuable) inventions were born here, and Edison himself foresees this when he invested. His first high salary income did not prevent him from reinvesting and creating more income.

He understands that what he wants to make is a long-term investment, so he must create a “shelter” for his crazy ideas. Telephones, phonographs, electrical railways, iron ore separators, electric lights… all these inventions came from Menlo Park Labs.

5. No need to invent the wheel again

The value of an idea lies in how it is used.

Sometimes, you just need to do a better job. Edison himself did not invent the light bulb. He invented the first commercially viable light bulb (please note the difference) and made many improvements.

Before him, dozens of people tried this idea, but finally gave up. In 1840, a man named Warren de la Rue also invented the light bulb, but the materials he used were too expensive for batch standards. In 1800 (80 years before Edison), Alessandro Volta also invented a telegraph, and he finally gave up the idea.

Edison tried harder than these people to try ideas that others had already given up. He finally chose carbonized bamboo as the material. In the process of searching for materials, his team also provided a lot of help. Legally speaking, many inventions and creations in Menlo Park’s laboratory belong to Edison, but these inventions and researches are all done by the team under his guidance.

“Genius is one percent inspiration and ninety-nine percent perspiration”

Thomas Edison started when he was 13 years oldEarn $50 a week by selling sweets and newspapers. Then, at the age of 19, he worked in the Associated Press, conducted experiments in his spare time, and developed the first four-type telegraph device, then sold it at a high price, and reinvested the income to create more and make a fortune.

Of course, not every step Edison made was successful. Around 1880, Edison’s General Electric made a mistake that can be said to have been stinking for years. His company focused on direct current systems, while his competitors made more profits by applying alternating current systems. In the end, Edison paid for his mistake: he not only lost money, but also lost part of his ownership in the company.

The difference between Edison is that no matter how many times he fails, he always has a strong will to stick to it. He does not judge whether an idea is worthwhile by the degree of madness, but by whether it can change people’s lives. Therefore, he can continue to find a way to light the bulb even after a thousand failures.

Great dreams are unrealistic. It’s like walking into the room and turning on the switch to turn on the light. This idea is unrealistic, but fortunately, Thomas Edison did not think so. ——Will Smith