The last bar contest the content of a litmus test track

On Monday, Apple CEO Cook chatted with a Silicon Valley reporter and podcast host for more than 30 minutes on an audio podcast program, about privacy, his flattery to Tesla, and his future Ten years of work at Apple and other topics. This podcast program is called Sway, from the comment section of The New York Times, and is updated every Monday and Thursday. Prior to this, Musk’s participation led to the fire of the audio social application Clubhouse. The blessing of big brothers and capital has made the overseas audio industry stand at the tipping point of the outbreak, although this is only a qualitative judgment.

According to the latest 20-F annual report of the music streaming platform Spotify, in the two years from 2019 to 2020, it has successively acquired 6-7 audio content or technology companies, including Anchor FM, Gimlet Media, Cutler Media, Megaphone, Bill Simmons Media, etc., each bid is roughly 100-200 million euros, the purpose is to obtain three things: users, content, and advertising monetization technology (monetization).

Last week it acquired Betty Labs, an audio live broadcast company, and pointed at the audio chat Clubhouse. According to the latest market data, Spotify’s monthly active podcast listeners have surpassed Apple Podcast, the podcast application that has been in the Apple ecosystem since the iPod era. When looking for songs in Spotify’s “search”, the podcast tag comes first. 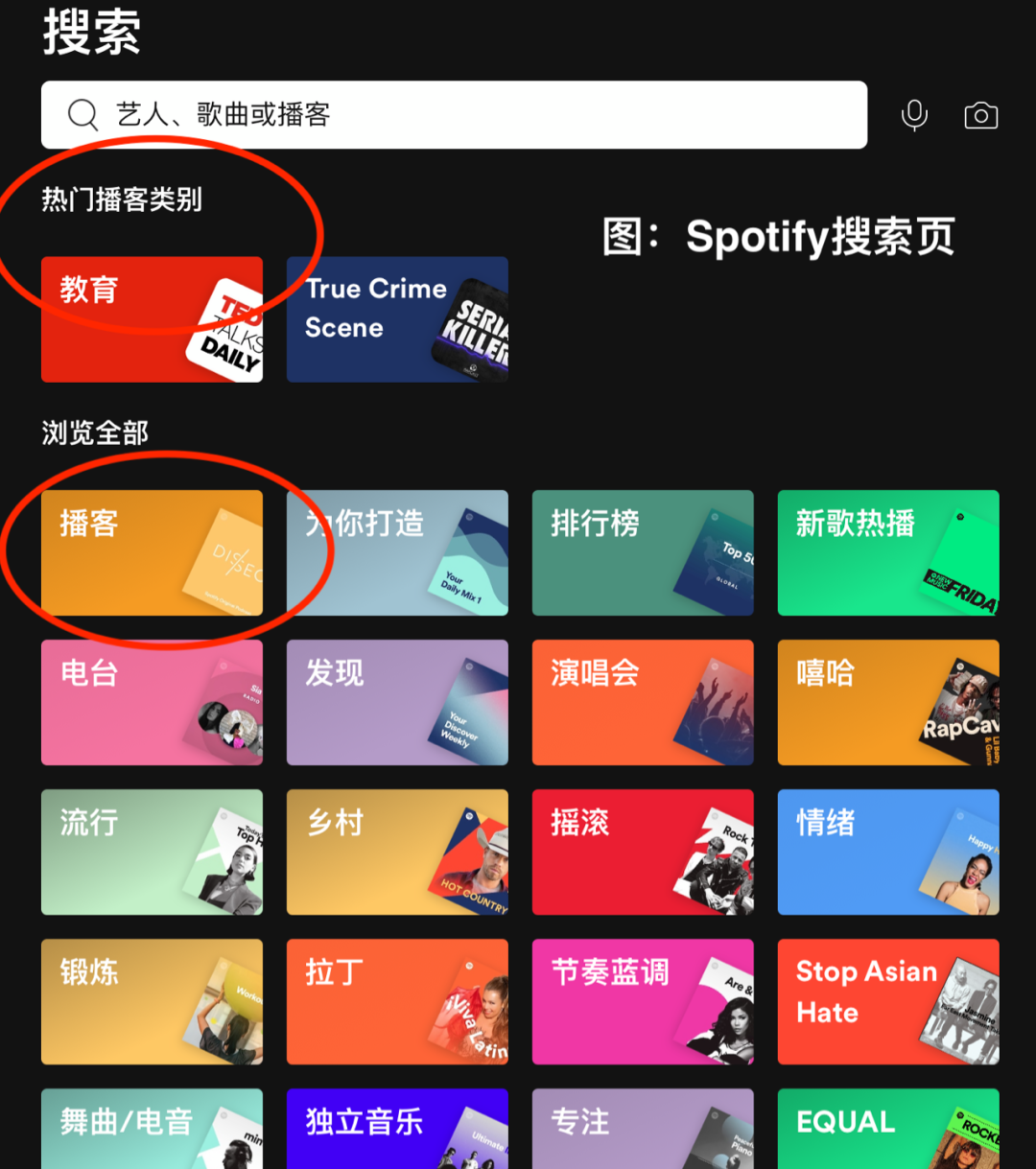 This wave of enthusiasm also caused a group of domestic startups to quickly turn to audio social networking. Among the traditional “audio top three”, lychee has been listed in the United States. After a year of downturn in stock prices, the epidemic factor has not been able to pull , On the contrary, not long ago, Citron’s long UGC audio community drove the rise in Litchi’s stock price; the relatively “heaviest” model of Himalayas is also gearing up for IPOs. If you miss this wave of listing/return, you don’t know how long you will have to wait.

Several giant companies have also increased the weight of audio/podcasting businesses, such as Tencent Music, NetEase Cloud Music, Tomato Chang Listening under ByteDance, and Maoer FM under Station B, but they have not risen to Core business level.

The next thing I want to analyze is the current domestic market environment and business realization situation compared with the European and American markets.Can it support the explosive growth of audio podcasting? This seems to be an unpopular old track that is about to be forgotten by capital.

Take Spotify as an example to look at its cost and revenue structure under this business model. The annual report said that from its launch in 2006 to the end of 2020, Spotify has paid a total of 21 billion euros in copyright fees. Who is this huge expense given to? There are mainly three types of people: 1. Record labels, such as the “Big Three”: Universal, Sony, Warner, and independent music companies or studios, such as Believe Digital and CD Baby, etc.; 2. Music Music publishers to obtain the recording rights and public performance rights of music; 3. Podcasts, to request content distribution rights from individual or institutional creators. The bulk is concentrated in the first two categories.

Its copyright contract is very interesting. Generally, it is more complicated to calculate the copyright fee according to the number of paid subscribers on the platform, or the playback volume of related music, or a combination of the two. But the simple one is that the more paying users and the greater the amount of playback, the more the platform will pay the copyright owner. But this is usually not a simple linear growth relationship, otherwise it will be difficult for the platform to make money on scale.

The payment on copyright has brought two pieces of revenue to Spotify, the vast majority of which is membership fees, and a small part is advertising. Among them, pure podcast content can only generate advertising revenue, not membership revenue, because users can listen to and download various podcast content on their mobile phones without paying (but not music). According to data from the latest financial report analyst meeting, 25% of the platform’s 345 million MAU (of which 155 million paid users) are also its podcast users. Is this ratio high? I think it’s not too high. The more common scenario is that users pay to listen to music on it, and find that the audio content is also good, so they listen to podcasts instead of the other way around.

Spotify tries to monetize audio content with advertisements, relying on user big data. Listening to the same podcast, the interstitial advertisements that user A hears are different from those of user B. In fact, the platform gives advertisers a data analysis capability. The more users of the platform, the more effective the data presented to advertisers. Rich, that is, the so-called more precise.

Many years ago, there was a program called “English Classroom in the Air” on the radio. Several foreigners chatted on a topic and taught Chinese to practice speaking and listening. This format is very similar to the feeling of podcasts in Europe and America today. Mainly reflected in the host’s original podcast content (mostly interviews, chats, talk shows) on Apple Podcast or Spotify.

In contrast, a considerable proportion of the domestic podcast market is ready-made audioContents, such as cross talk by Deyun Club, storytelling by Shan Tianfang, and Peppa Pig’s story, are strictly not considered podcasts. After the platform obtains the copyright, the VIP content can be used to distinguish the listening qualifications of members and non-members. For example, Himalaya has made a children’s version in addition to the main App, and most of the high-quality content inside has set VIP restrictions. I did not pay on Himalaya myself, but I am a paying member on the children’s version. This is also the value of the platform in the field of vertical audiences.

It may still be difficult to judge which of these two models is better. The model of buying rights to attract members is similar to Spotify’s practice in the music field. The royalty expenditure is a big expense, resulting in a relatively low gross profit margin (26%). Left and right), restricting its profitability, this is also a constraint in the long-term video fields such as iQiyi, Tencent Video, and Youku. However, we have to consider the overall appreciation tendency of the audience market. The mode of host-style podcasting emphasizes the human factor and puts the host’s charm forward. The phenomenon that Spotify spends a sky-high price of 100 million US dollars to exclusively sign a podcast host has not yet appeared in the domestic audio field, which may indicate that domestic users have not so much appreciation for the host.

To give a simple example, when I was in college, it was popular to listen to the radio together after the lights in the dormitory were turned off. Radio dramas like “Interpol 803” belong to the front of the content, and it doesn’t matter whether there is a host or not; It belongs to the front of the person, and the audience follows the host. These two models have evolved from radio broadcasting all the way to the era of Internet podcasts, and their consumption core has not changed. On the whole, it should be said that content factors have a competitive advantage over human factors in the domestic market. But there are also relatively niche audio platforms like Litchi fm that do not engage in copyright business and rely on audio live broadcasts to make a living. They do differentiated competition, although later other platforms have also filled in the shortcomings of audio live broadcasts, turning differentiation into The standard configuration.

About the second half of last year, NetEase Cloud Music and Tencent’s QQ Music have successively launched the podcast area. Due to the short online time, the current community popularity is obviously not as good as those scenes where young ladies sing live, and even worse than some two-dimensional live broadcast rooms. Because in these real-time scenes, listeners can interact through barrage, pictures and texts in chat rooms, virtual gifts, etc., or the logic of live video. Perhaps it means that domestic users are stronger in terms of interactivity, sense of participation, and desire for expression. Podcasts that are more knowledgeable and recorded in advance may be consumed.The threshold is still high. Therefore, a group of giants + startups will imitate Clubhouse to do audio social networking in the near future.

This has led to the current shortage of podcasts. According to the annual report, Spotify had 70 million tracks and 2.2 million podcast titles as of the end of last year; QQ Music, the largest domestic music library, now has 40 million songs, which is the same order of magnitude as Spotify, but all domestic audio platforms have added Podcast content may not reach the 2.2 million level.

Therefore, the most important thing for the domestic podcast industry is to increase the supply, and it has not considered the level of commercialization. Because the MAU is not up, advertisers will not insert advertisements on it; while taking the road of paid podcast members, their willingness to pay is much weaker than for those well-known copyrighted content. Why should I pay to listen to other people’s chats? Unless it is a celebrity effect, such as Yu Qian’s “Qiandao” broadcast on the Himalayas, which has been broadcast over 100 million in total, but this is back to the cost issue.

On the supply side of UGC, podcasts are facing competition from short videos and medium and long videos. Because the content producer’s plate is so big, the video and the sound are quite divided in the way of presentation. At present, we have not seen the phenomenon of large platforms spending money and giving resources as much as they supported short video creators in the past.

But domestic podcasting faces at least two powerful conditions: the exclusivity of the scene and the pull of smart devices. For example, before going to bed, driving, and other scenes that need to liberate the eyes, it is one of the few more concentrated times of the day, which is naturally suitable for long audio rather than short video consumption. Similar to what Jiang Nanchun of Focus Media has said in the early years, elevator advertisements are exclusive, because usually there is no signal in the elevator, people will put down their mobile phones and look at the advertising screen, but now the signal in many elevators is no longer a problem, and its exclusive value has a certain degree of exclusivity. weaken.

In addition, after a wave of home smart speakers in the past few years, new energy vehicles have become another popular track. Both of these scenarios have the ability to reduce fragmented time into pieces. One of the future trends of new energy vehicles is the construction of software services and content ecology. Smart speakers have already driven the consumption of audio copyright content, and vehicles will also Audio podcasting pave the way.

To sum up, the domestic audio podcast industry has not found a suitable commercialization path when it comes up. This is related to domestic supply and consumption habits. This has caused startups to slow down, but now they are getting hugeHead down. It can be said that long audio has now become the last stick on the content track. It relies on the ability to consume time for users to upgrade the battle, supplemented by the content prospects of new energy vehicles. Although the podcast has not yet reached the “take off” moment, this last One stick has started, and overall I am still inclined to be optimistic about the explosive potential of audio.