Spicy on the street challenged, passers-by transformed into a “cargo” anchor in the live broadcast room.

Spicy on the street challenged, passersby changed and became the “carrying goods” anchor in the live broadcast room.

When the snack food market focuses on the trend of “health” and brands have advertised “low sugar and low fat” and “no additives” and other hot words, it seems that the less healthy spicy snack food track has made capital smell Business.

The hot development of the spicy snack food track not only gave birth to the “National Spicy Tiao” Weilong, but also recently a new trend of live broadcast-the challenge of eating spicy food on the street.

The anchor guides the pace of bringing goods throughout the show, which has become the standard for most live broadcasts of goods. In this general environment, the leadership of the live broadcast room is given to passersby to challenge the spicy food on the streets, which naturally appears unique. 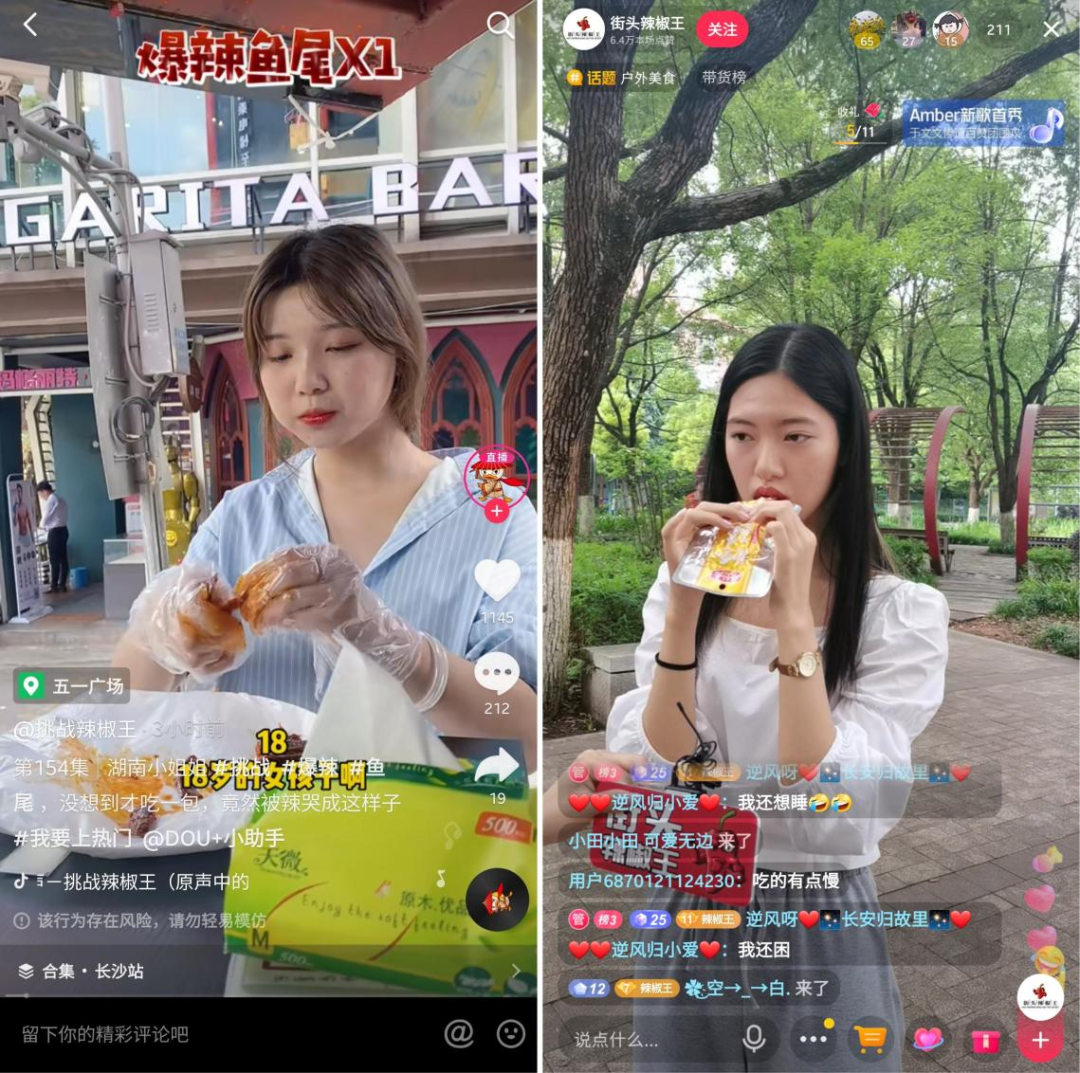 Simple and rude rules, coupled with instant rewards feedback, the live broadcast content is also eye-catching. The challenge rule for the Chilli King challenge is “Eat 1 pack of 100 yuan, eat 2 packs of 200 yuan, eat 3 packs of 300 yuan”, the bonus will be cashed out on the spot after the challenger succeeds in the challenge. The products used in the live broadcast room for passers-by challenges are generally branded products such as “Xiao Xi A” in the shop window, such as spicy fish tail, toothpick beef and other products.

Passers-by acted as the “anchor” in the live broadcast room most of the time, while the original anchor became an off-screen “anchor”. During the time when passersby try to eat, the “Broadcasting Assistant” needs to answer the questions of the audience in the comment area, and provide information on product selling points, preferential activities and other information.

For live broadcast rooms that are mainly engaged in food, after eating and broadcasting has entered the era of “strict supervision”, the challenge of turning passersby into “anchors” may be a low-cost and effective way to circumvent platform audits. Risky live broadcast format.

After the emergence of problems such as fake eating and waste, CCTV’s name was called by CCTV. The major short video platforms have also entered an era of “strict supervision” on food broadcasting. Food live broadcasts have also been implicated and faced with platforms. Strict review.

Douyin once said after CCTV’s roll call: “The platform will take serious actions against the current online eating and broadcasting content that wastes food, or uses fake eating, inducing vomiting, and advertises that the amount of eating is mostly eaten. Or be punished by deleting works, shutting down live broadcasts, banning accounts, etc.”

Although the rules of the platform only restrict eyeballing and wasteful behavior, in actual operation, the scale of judgment is difficult to grasp. Most brands and anchors will choose not to taste, or a small amount of taste to avoid review.

After watching many casual snack flagship stores such as @百草味旗舰店, @良品铺子旗舰店, @三只松鼠, @卫龙官方旗舰店 on Douyin, the reporter found that the anchors did not use eating in the live broadcast room. Product introduction in the form of broadcast.

So,We can see such a strange phenomenon: while other categories attract users’ attention with trial effects, food products are subject to platform rules and it is difficult to conduct tasting sessions in the live broadcast room.

In the era of “strict supervision” on food and broadcasting, live streaming of snack food delivery in the form of the challenge of eating spicy food on the street provides a breakthrough idea for the live delivery of food products.

According to the data of Feigua, the challenged Pepper King with only 518,000 fans has achieved sales of 4.677 million yuan in the past 30 days (data statistics time is from April 25 to May 24, 2021). The spicy fish tail, which is often used for passers-by challenges, is far ahead of other single products with a sales volume of 130,000. The ability to carry the goods on the street is evident. 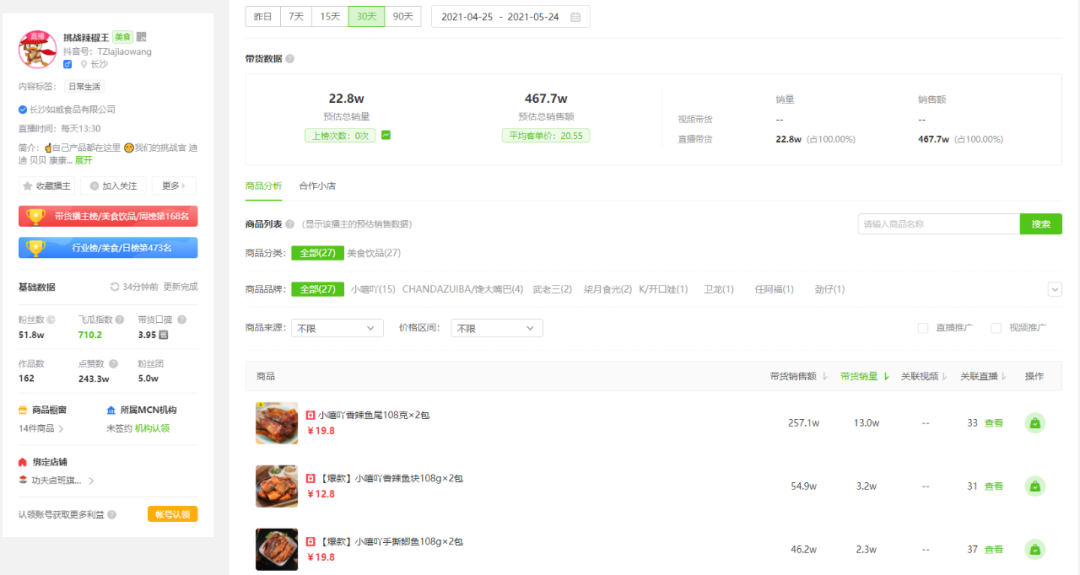 Challenge Pepper King to achieve such a result of bringing the goods, not only the innovation of the live broadcast form, but also closely related to its paid promotion behavior.

Take the live broadcast of Challenge Pepper King on May 20, 2021 as an example. According to Feigua’s data, the source of viewers in its live room is 9% from following users, 22% from video recommendations, and from the live broadcast square, The proportion of viewers who paid for DOU+, FEED streaming, etc. reached 69%.

According to the “2021 Gourmet Short Video and Live Marketing Trend Insights” released by Feigua Data, the source of the audience in the live broadcast room of the gourmet self-broadcast number is the live broadcast square and the proportion of paid placement is 58.92% (this proportion is integrated in 2021). From April 8th to May 8th, the sales data of the self-broadcast number of the gourmet brand of TOP1000 sales of Douyin). 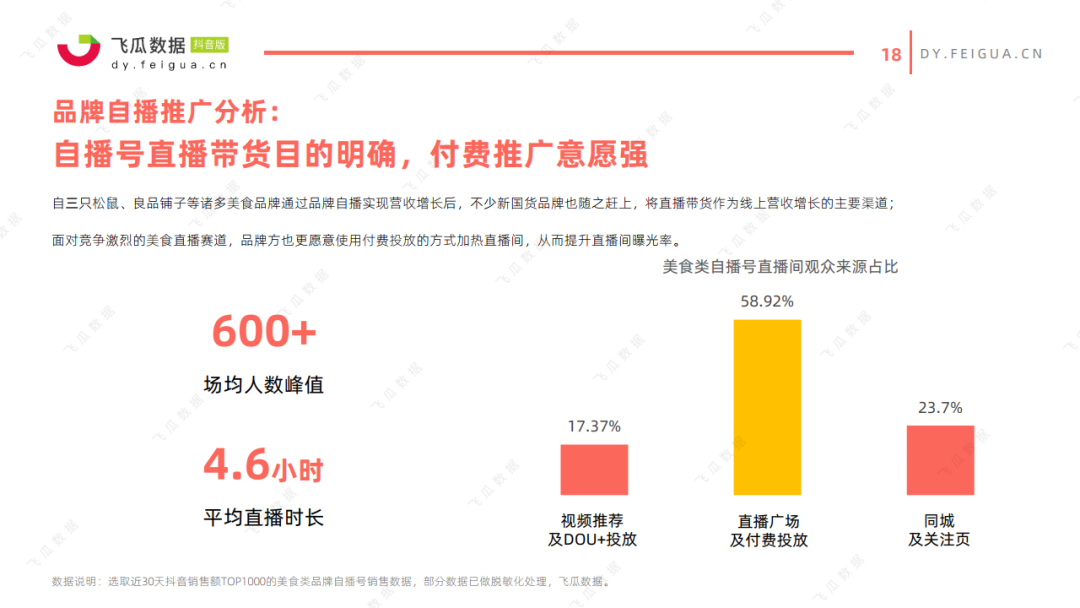 The challenge of street spicy eating, which is innovative in form and integrated into regular store self-broadcasting and paid promotion methods, provides a new perspective for the entire live streaming industry.

*The title map comes from: Meizhou Time and Space