What are the new changes in the ranking of public funds after a year of separatism?

The tonnage determines the coffee position. In addition to performance, non-money-based scale is an important criterion for measuring the strength of a fund company. In the public offering industry, the rankings are not limited, and the scrolls are constantly rolling.

Recently, the China Fund Industry Association announced the “Top 20 Non-Currency Public Offering Funds of Fund Management Institutions in the First Quarter of 2021”. What are the new changes in the ranking of public funds after a year of separatism? 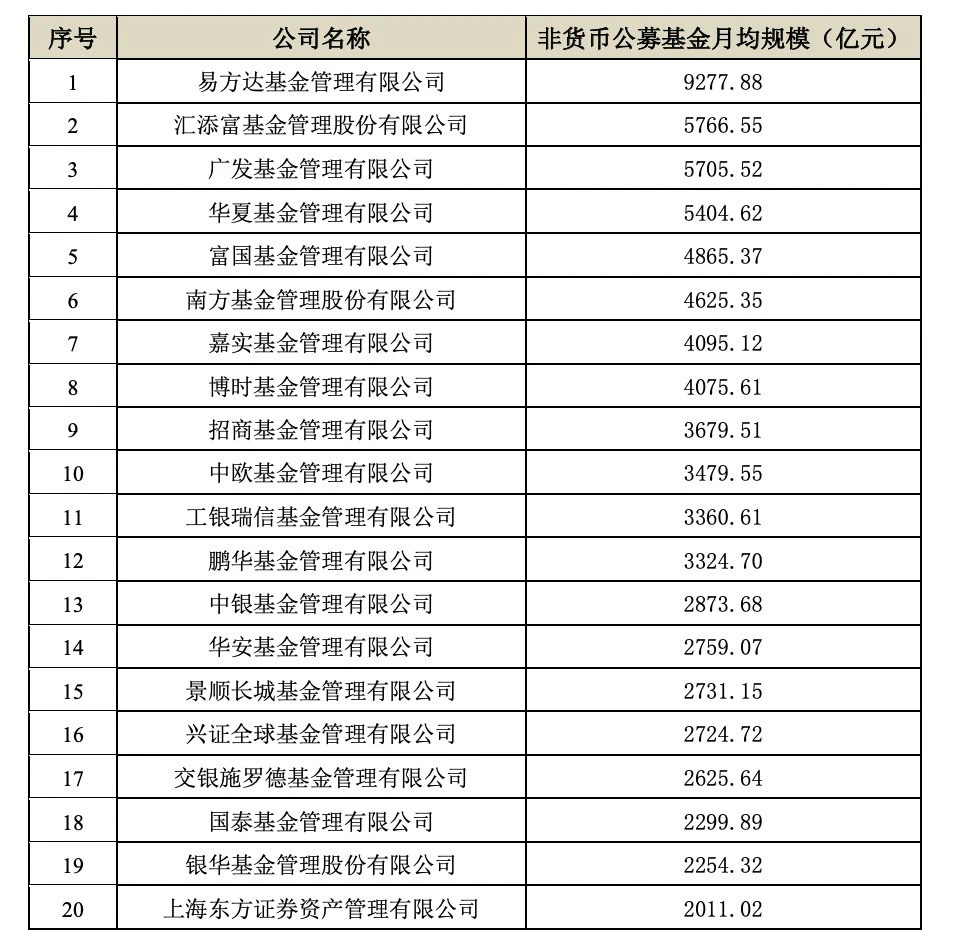 In the war without gunpowder, E Fund not only took the top spot again, but also left other companies far behind with the non-money-based monthly average scale of 927.788 billion yuan, which was higher than the second-ranked China Huitianfu Fund. 351.133 billion yuan, firmly sitting in the position of “public fundraising brother”.

Compared with the first quarter of 2020, E Fund’s scale increment reached 488.38 billion yuan, an increase of 111.14% year-on-year. What is this concept? It is equivalent to Yi Fangda spent one year to recreate a “Public Offering One Brother”.

The “substitute team members” are Invesco Great Wall Fund and Dongfanghong Asset Management. The former counterattacked to the 15th place with 273.115 billion yuan; the latter with 20.102 billion yuan, just stuck in the 20th place.

It can also be seen from here that the threshold of TOP20 has been greatly increased. In the first quarter of last year, Yinhua Fund, ranked 20th, had a non-money-based average monthly scale of 137.206 billion yuan.

If you want to comment on a “yearThe Best Progress Award”, CEIBS Fund will do its part.

Not only the scale growth rate ranked first in the TOP20, reaching 138.89%; the latest ranking also rose by 8 places, from the original 18th to the TOP10.

The higher the ranking, the fiercer the competition. China Universal Fund successfully broke the siege, and its ranking jumped from the original 6th to the 2nd, with an additional scale of 279.525 billion yuan.

Some people are happy and some are worried. In the past year, Boshi Fund encountered “Waterloo”. In this round of issuance boom, it only gained an average monthly non-money base increment of 57.551 billion yuan, causing its ranking to drop from second to eighth.

The situation of the Bank of China Fund is even worse, with a year-on-year increase of only 29.363 billion yuan, and its ranking fell out of the TOP10, from the original 8th to the 13th.

The Matthew effect has increased

On the whole, the pattern of public offering funds shows that “the strong are always strong”, and the Matthew effect of leading companies has intensified.

Data can support this. As of the first quarter of 2021, the monthly average non-cargo-based scale of the TOP20 totaled 7.79 trillion yuan. According to the China Fund Industry Association, as of the end of March 2021, there are 134 fund management companies in my country, with a total of 1.245 billion yuan under management of non-cargo-based assets.

This means that the top 20 fund companies account for more than 60% of equity fund shares.