Li Keqiang inspected the National Natural Science Foundation of China on July 19 and presided over a symposium. The premier said at the meeting: “We have reached the critical moment to speak out and strengthen basic research.”

The National Natural Science Foundation of China was established in the 1980s and is my country’s support for basic research. The “main channel” has provided extensive and stable funding for basic research over the years. Its development process marks a historic shift in the allocation of scientific and technological resources from “planned allocation” to “competitive selection of the best”.

Improve the education level of basic subjects such as mathematics, physics and chemistry in schools, and cultivate more basic research talents

Li Keqiang listened to information from the Ministry of Mathematical and Physical Sciences and the Science Foundation Report on the situation of the management platform and the cross-science department.

Li Keqiang said: “The reason why we emphasize the importance of mathematics is that natural science first originated from mathematics. The real entry of human civilization into the field of science also began with mathematics. It can be said that mathematics is the foundation of all science. In fact, many “stuck neck” problems are ultimately “stuck” in basic research.”

Li Keqiang said that it is necessary to improve the education level of basic subjects such as mathematics, physics and chemistry in schools, and cultivate more basic research talents. Introduce outstanding talents through multiple channels to promote the improvement of basic research. 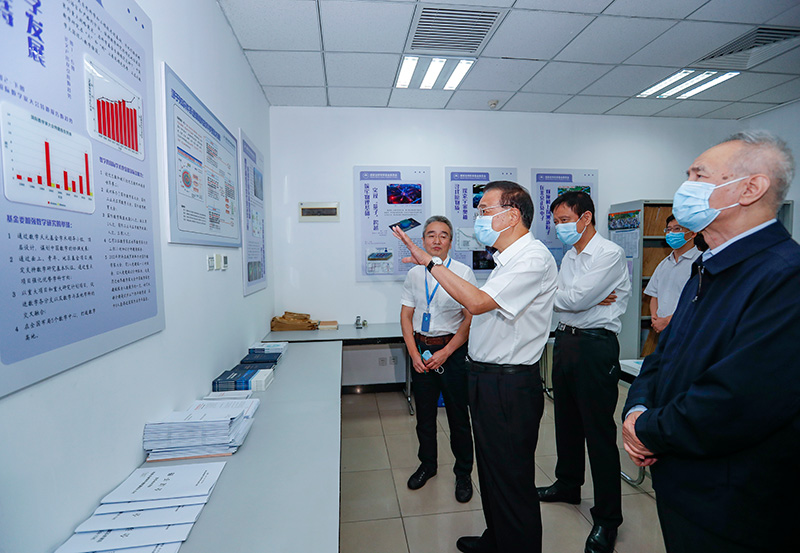 Li Keqiang said that my country is in the field of applied science and technology, especially in application scenarios that are integrated with the market. Great progress in the field, some have even led the world.

“But our basic research is not strong yet, and the originality is not high. Basic research and original innovation should be placed in a key position.” Li Keqiang said.

He pointed out that it is necessary to adhere to Xi Jinping’s new era of socialism with Chinese characteristics as the guide, implement the new development stage, implement the new development concept, build a new development pattern, and promote high The requirements of quality development, adhere to the core position of innovation in the overall situation of China’s modernization drive, and further stimulate the enthusiasm of innovation and creativity in the whole society through deepening reforms, bear more scientific and technological achievements, and provide strong support for national development and people’s livelihood improvement.

“The current international environment has undergone great changes. There are many shortcomings in the development of science and technology in my country, and the bottleneck of many industries is mainly due to the weak original innovation.” The Premier said, “Basic research It is the cornerstone of promoting original innovation and building the “high-rise” of technology and industrial development. Our country has reached a critical period when we must vigorously strengthen basic research. Based on reality, we must not miss this opportunity.”

Li Keqiang said: “Science is a process of long-term accumulation, especially basic science. A breakthrough cannot be achieved in one year, two years, or three years and five years. You must calm down, be down-to-earth, and overcome some basic scientific problems.”

“We must absorb all the advanced achievements of human civilization and strengthen international cooperation.” Li Keqiang said, “A lot of basic research, especially original innovations, are made on the shoulders of giants. Breakthrough. Our scientific researchers must have the perseverance and focus of “a sword for ten years”, and make their due contributions to the country, the nation and even mankind.”