As a barrier to the cat’s eye, the applet further enhances the capabilities of the full-link service industry.

This is a traffic story with a social ecology background. At the end of 2017, Cat Eye officially launched the WeChat applet “Cat Eye Movie Performance”. Within two years, the cat-eye WeChat applet user surged and became a cat’s eye.The important link in the full-text entertainment strategy, the small program social traffic bonus and the convenient link channel, let the cat’s eye take the lead in controlling the new amount in the current Internet users’ cost is increasing. The public entertainment consumption entrance is quietly changing.

On August 28th, official news showed that the size of the Cat Eye WeChat applet exceeded 250 million, and the number of users announced by the beginning of this year was 200 million, only half a year apart. What does this message mean? According to CNNIC’s 44th “Statistical Report on the Development of China’s Internet Network”, as of June 2019, the number of Internet users in China reached 854 million. With a user size of 250 million, this means that at least one out of every four Internet users is using the “cat-eye movie show” WeChat applet. 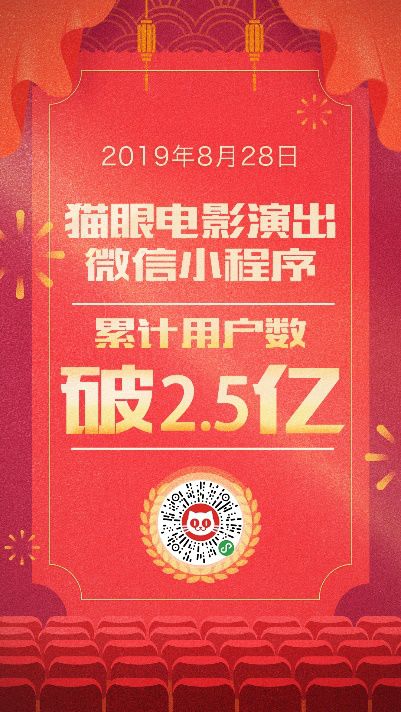 It is not difficult to understand the user growth logic behind the applet through the operation of the cat’s eye small program. On the one hand, the cat’s eye WeChat applet quickly links users and service scenes to form transaction traffic with the convenience of “buy and go”. On the other hand, the user completes the traffic stacking through various interactive gameplays and social games. At the same time as the formation of the potential energy, the user’s retention is enhanced by social attributes.

In the context of Internet traffic competition from the acquisition of stock dividends to the mining of incremental dividends, Cat Eye WeChat applet reserves user traffic is undoubtedly a guarantee for all parties in the content industry, cat eyes The small program becomes a content distribution port, where the content generates strong interaction with the user, and completes the announcement and dissemination, and finally reaches the transaction conversion, and provides the entire line of services from the publicity to the consumption.

250 million users may be a node, which means that the development focus of the Cat Eye WeChat applet will shift from traffic acquisition and user growth to improve retention and facilitate transaction conversion. From the initial small platform that tested the nature of the water to the current user trafficThe main battlefield, the reason for the strong rise of Cat Eye WeChat small program, is worth exploring.

In terms of the cat’s eye WeChat applet, the rapid growth of users is due to the convenient and direct use of small programs, and on the other hand, the diversified user gameplay introduced by the cat’s eye program.

In the small program’s convenient advantage, the cat’s eye WeChat applet relies on WeChat ecosystem and has a natural flow basis. In the second quarter of 2019, Tencent’s financial report showed that WeChat’s monthly mobile users reached 1.13 billion, which is one of the most popular mobile apps in China. The strong social relationship behind it makes WeChat applet become the traffic on the Internet market. Daddy, the emergence of the cat’s eye WeChat applet, successfully transformed WeChat’s social ecological advantage into user increment.

At the same time, compared to the traditional mobile APP, the download program is used for use. The small program omits the time cost and traffic cost of downloading and installing, and preserves the online ticket purchasing functions of movies, shows, events, etc. on the APP. Various entertainment projects release information, provide movies to see the mark, post-view scores, etc., Let users get a “package-free” experience at the lowest cost. Before, Cat Eye and WeChat The payment is jointly held in more than 4,000 theaters across the country to hold preferential movie viewing activities. Users can obtain discounts on the cat’s eye small program through WeChat payment for purchase of movie tickets. These promotional activities have further enhanced the coverage of the cat’s eye program.

On the other hand, the Cat Eye WeChat applet has an extremely rich user operation. Cat Eye Entertainment launched a super-day, summer special, 0-second grab, video collection page and other gameplay on the small program, with the discount ticket, has an excellent declaration effect. 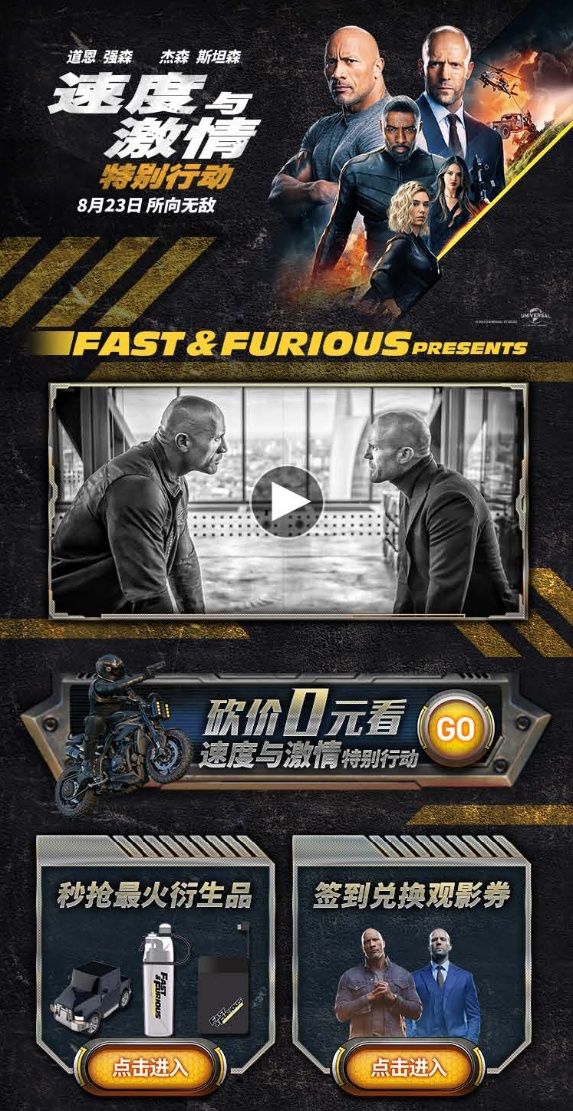 Convenient trading mode and various social preferential gameplays, allowing Cat Eye WeChat small program to improve the conversion of ticket purchases, strengthen the power of film announcement, and make small programs an important entry point for users’ entertainment consumption. When users enter the small program, they can participate in bargaining and other activities. In order to obtain benefits, users should go out from the small program and reach more users in WeChat.

This creates an “anti-funnel model” for the Cat Eye WeChat applet. All kinds of preferential activities and social interactions of small programs avoid the rules of users in the traditional marketing and sales fields, which are diminishing with the product links. Instead, users are more and more connected with the links, realizing the original traffic and The superposition of new traffic.

From “one vertical and one horizontal” to “cat claw model”,The full-text entertainment path of cat-eye entertainment

In fact, it is not difficult to see from the cat-eye WeChat applet that cat-eye entertainment as an Internet company is always a “service concept” and a “link attribute.”

In 2016, Cat Eye just split from the US group and the reviews. Zheng Zhizhen, CEO of Cat Eye Entertainment, determined the “one vertical and one horizontal” strategy, from ticketing, vertically expanding the film Services in the upstream and downstream of the industrial chain, while utilizing the reusable capabilities accumulated in the process,Into other areas of the entertainment industry, using data, products, resources and other platform capabilities to create more value for partners.

In two years, the cat’s eye gradually completed the penetration of all aspects of the entertainment industry. In the vertical, all the major movies, from the production, online promotion to the offline level marketing, can see the name of the cat’s eye. At the same time, in the horizontal direction, the cat’s eye is engaged in the production and promotion of content such as TV dramas, online dramas, and variety shows. On this basis, Cat Eye further proposed the “Internet + Entertainment” strategic layout, and the vertical and horizontal “lines” of the cat’s eye were gradually interwoven into a “net”.

In 2018, the proportion of online movie tickets in China has reached 85%, and the market share of cat-eye online entertainment ticketing has reached 60%. Cat’s eye has already provided entertainment content services for movies that account for 90% of China’s comprehensive box office. At this time, the cat’s eye is not only It is a ticketing platform, but provides a full-service pan-entertainment content platform for the content industry from concept stage to production, announcement, and release.

At the same time, Cat Eye Entertainment and Tencent announced the establishment of the “Teng Cat Alliance” to establish a strategy covering the services of the general entertainment industry. Cooperation, Tencent Pictures, Tencent Video, Tencent Music, Tencent Games, Tencent Cloud, and WeChat, QQ, payment, voice and other Tencent platform will fully support the development of cat eye entertainment. This means that the WeChat applet is just a starting point, and Cat Eye Entertainment has further gained support from Tencent Eco.

And “cat claw model” and the emergence of the Teng Mao Alliance, both show the cat-eye entertainment connectivity industry upstream and downstream, taking into account the C-endMarket and the intention of the B-end market.

Building a chain of B-end industries through the user traffic of Cat’s Eyes, providing online content promotion and offline marketing and promotion services for the upstream capital and film companies, and at the same time, assisting theaters and performance venues in building cooperation with cinemas. Improve economic efficiency and establish stable relationships.

The cat’s eye small program is an important part of it, and it is gradually occupying a significant proportion. It is understood that in addition to the WeChat applet, the cat’s eyes are also in the small programs of Baidu, headlines, and vibrato, which form a multi-platform cat-eye program ecosystem. Partners such as TV dramas and live performances provide better ability to declare.

Cat Eye released the mid-year financial report for 2019. The financial report showed that Cat Eye Entertainment’s revenue for the first half of the year was 1.985 billion yuan, and the adjusted net profit was 380.4 million yuan. The cat’s eye has already achieved profit. Now that the competition for Internet content platforms is officially moving into the next round, Cat Eye Entertainment is looking for more revenue paths and building platform barriers. And who can take the lead in building an ecological chain and realizing the path of multiple realizations, whoever takes the lead in occupying the highlands, smallthe program is one of the barriers of the cat’s eye, and with the layout of the full-text entertainment strategy The cat’s eye will be more and more treacherous, and the second half of the traffic ecology has begun silently.