On August 28th, Le Bee Network stated that “Because of the adjustment of the company’s business, it will stop operating on September 18, 2019. At that time, users will no longer be able to log in to the Le Bee Network. Officials said that after the bee net was shut down, Users can still contact by phone to include customer inquiries, refunds, etc. 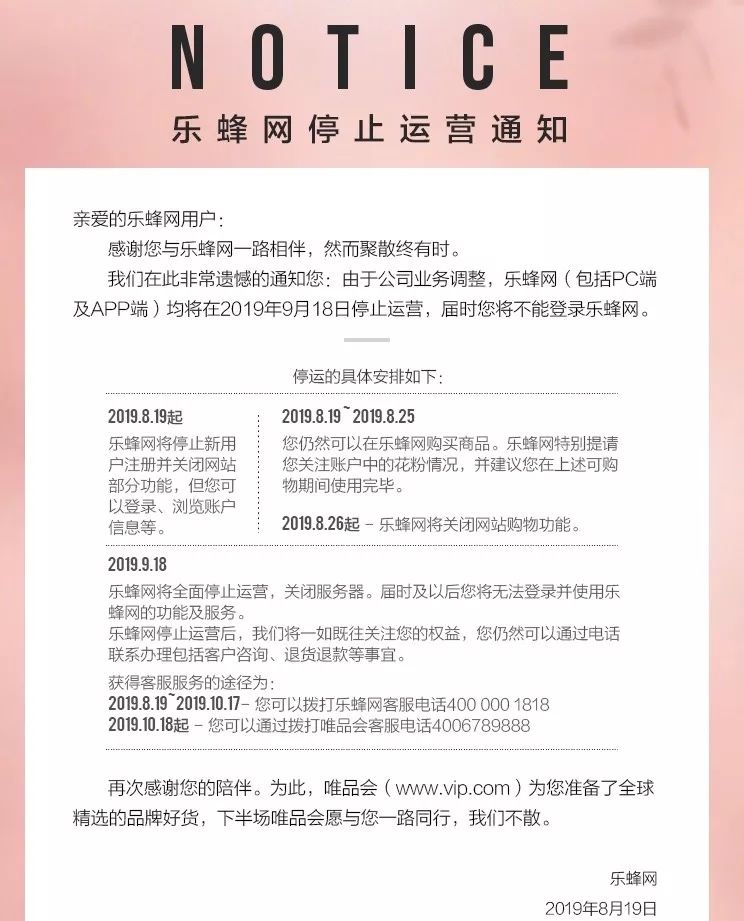 At the same time, this stop notification still does not forget to be a VIP product: “Vipshop will prepare a global selection of good brands for you, and the second half will be with you all the way, we are not Sans.”

The relevant person in charge of Vipshop said in response to this, “For the sake of business adjustment, the company will confirm that it will be shut down in the near future. The decision to close the agreement is to obtain the unanimous consent of the shareholders of Le Bee Network. After that, the relevant departments have completed preparations for shutting down.”

The music bee net, once known as the golden key, was combined with the Jumeiyou products invested by Sequoia Capital for a period of time as the vertical wall of cosmetics. However, the two went to different fates in the middle. In 2014, Jumei was listed on the New York Stock Exchange, but Le Bee Network was “selling” for the VIPs.

The “marriage” between Le Bee Network and Vipshop will not be so sweet. The Le Bee Network, which continues to lose money, has even become a burden for Vipshop. For Vipshop, after the users and suppliers of Le Bee Network will be “Vipshop”, Le Bee Network is destined to escape the outcome of the fall.

However, Le Bee Net and Jumei Youpin can also be called the same way. Nowadays, Le Bee Network has become a thing of the past. Its old rival Jumeiyou is still alive, but it is struggling. The decline of these two platforms is even dying. In addition to the problems of their own operations, they are also limited by the limitations of the vertical e-commerce platform.

The decline of Le Bee Network and Jumei Premium has its own reasons for poor management, but at the same time it is also limited by the vertical e-commerce platform. When the two platforms of Le Bee Network and Jumei Youpin took root in the cosmetics market, the e-commerce industry is still in the era of barbaric growth. Tmall only has Taobao Mall, Jingdong is still burning money to sell 3C, and it is naturally easy to stand out in a blue sea. But the opportunity, in the final analysis, will be only a few years. After all, the process of heading the entire e-commerce market is irreversible.

Some people say that China’s e-commerce has spawned many diversified e-commerce websites in the initial stage, just like the large department stores in the comprehensive category, providing unified services for all products at an early stage. With the maturity of the e-commerce industry, vertical services have begun to receive attention.

The market development track is indeed true. However, in the initial stage of the e-commerce market, the “big and complete” all-category platform has not yet formed core competitiveness in specific areas. Therefore, the “small and beautiful” vertical e-commerce in specific areas such as beauty, maternal and child can be With differentiated positioning, lay the foundation in the user community to open up brand awareness and popularity with consumer products that are more in line with specific groups of people.

But the single business model of vertical e-commerce also determines that its market ceiling is low, and when they realize that they need to expand more business and a larger market, the time left for them is not much.

In the e-commerce market, the head platforms such as Ali, Jingdong and Suning have just begun to pursue a “department store” to quickly expand their market share. Data show that in 2018, the market value and market share of online retail e-commerce, Tmall, Jingdong, Pinduo, Suning Tesco accounted for 90.4% of the market share, the other platforms totaled only 9.6%.

In the past year or two, after the horizontal expansion of the giants is close to saturation, they have begun to focus on the deep-seated areas, which further weakens the competitiveness of the vertical e-commerce platform. 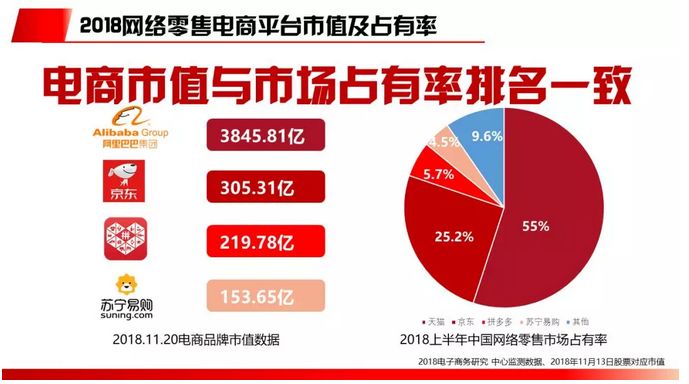 In fact, for a comprehensive e-commerce platform, compared to vertical platforms, their competitive advantage lies not only in more comprehensive category coverage and larger market size, but also