This week, Tuoba Industrial Research Institute released the rankings of global wafer foundries in the third quarter of this year, mainly introducing the revenues, year-on-year growth, and market share of the top 10 vendors.

This week, Takuya Industry Research Institute released the rankings of global wafer foundries in the third quarter of this year, mainly introducing the revenues, year-on-year growth, and market share of the top 10 vendors. .

As can be seen from this list, the top four market share companies are TSMC (50.5%), Samsung (18.5%), GlobalFoundries (8.3%) and UMC (UMC, 6.7%). These four foundries are still firmly occupying the top four positions, and it is difficult to shake in the short term. 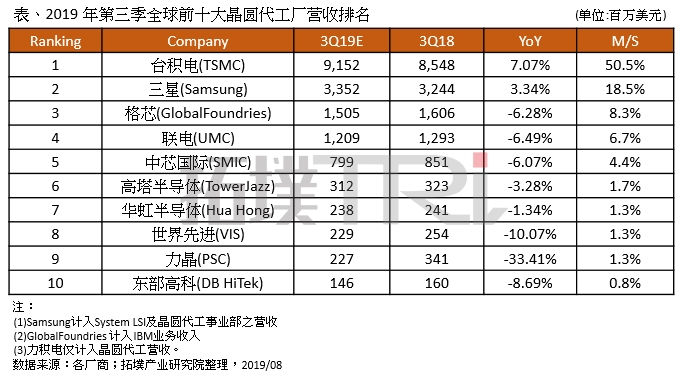 From the year-on-year growth (YoY) of these 10 manufacturers, it is bleak. Only the top two TSMC and Samsung are positive growth, and the other eight have a negative growth rate. Mainly caused by the sluggish market environment. Especially in the 9th position of Power Crystal, the growth rate is -33.41%, the situation is not optimistic. 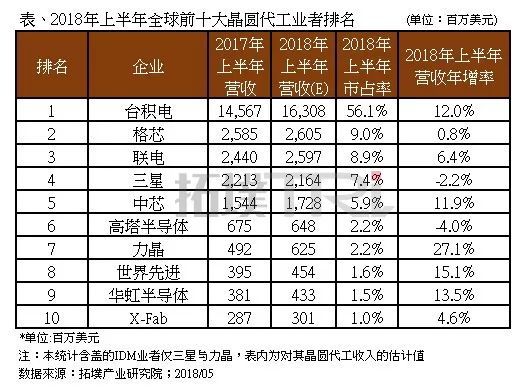 As can be seen from this list, In the first half of last year, the growth rate of the top 10 manufacturers’ revenues was relatively good. Except for Samsung and Gaota, the other eight companies achieved positive growth year-on-year, especially in the latter few companies. In the top four.

This is mainly because in the first half of 2017 and 2018, the surge in stock price increase represented by memory has just reached its peak at that time, and the impact of the economy has a post effect. In addition, the demand of the entire semiconductor industry, Although the overall situation is in a downward trend, it is relatively strong compared to 2019. These factors will be directly reflected in the chip manufacturing, and the revenue data and changes of the major foundries in the market are barometers, which can reflect the market conditions intuitively.

So, compare the above two lists, what can you see?

First of all, from the ranking point of view, SMIC ranked fifth, its position is very stable, and with it as the boundary, the top four manufacturers remain unchanged, but the ranking has changed to Samsung The change is most obvious. Among the last five, the biggest change was Power Crystal, and the 10th manufacturer changed from last year’s X-Fab to this year’s Eastern High Tech.

In short, the biggest changes are Samsung and Powerchip.

Changes are still very obvious, especially the market share has more than doubled, and from the two lists, compared to the first half of last year, the other nine cities in the third quarter of this year The share has fallen slightly, and their lost market share seems to have been taken away by Samsung.

First of all, in order to compete with TSMC, especially in terms of advanced processes, Samsung will be the wafer in 2017.The industrial division was spun off and started to operate independently, which made it more efficient and flexible in the market competition. Moreover, Samsung’s mobile phone processor chip is still a major customer of its foundry department, which has orders for both inside and outside in the foundry of the foundry. It has both flexibility and the factors of “drought and water conservation”.

Secondly, it is its advanced process technology. In today’s foundry industry, only Samsung has been able to compete with TSMC in advanced technology, especially the 10nm and 7nm processes. Although they are behind TSMC, they have no second competitor. The top two in the industry, there is no problem in maintaining profitability.

Moreover, the 5G market is about to usher in a period of rapid development. In terms of 5G mobile phone processor chip manufacturing, only TSMC and Samsung can only undertake it. Samsung’s own 5G processor chip is naturally produced by its foundry. In addition, the industry’s high-tech 5G chip is also produced by Samsung’s 10nm and 7nm+ process technology.

Finally, in recent years, Samsung has been expanding the MPW (Multi-Project Wafer) business, and can compete for customers in many segments, which is also in line with the development trend of the Internet of Things.

The decline of Powerchip

In sharp contrast to Samsung’s rapid rise, Powerchip has shown a sharp decline. In the first half of 2018, the company’s revenue growth rate was the highest among the 10 companies, reaching 27.1%. In the third quarter of this year, its revenue growth rate dropped sharply by -33.41%, which is the most bleak among the 10 companies. It also fell to the ninth place, a little bit different.

There are several reasons for this:

Lijing was originally a DRAM maker. Later, due to the sluggish operation, it was transformed into a foundry. After that, it has developed rapidly. The performance has been good, especially in the first half of 2017 and 2018. The price increase made Li Jing a big profit, and the profit in 2018 exceeded NT$10 billion.

However, since the second half of 2018, with the decline of the semiconductor industry, especially the DRAM price plummeted, the utilization rate of Powerchip foundry DRAM is low, and there is almost no profit in the first quarter.

In addition, Powerchip’s net profit last year exceeded 10 billion, and nearly half of it came from the contribution of the integration of investment in Hefei’s 12-inch wafer foundry. Due to technology transfer, 5.2 billion NT dollars of royalties were recorded. However, this year, due to the conversion of royalties into crystal holdings, no cash was recorded. In addition, Jinghe has not yet made a profit. Powerchip’s financial report last year showed that Jinghe lost NT$1.43 billion, and in the first half of this year, Jinghe lost money. 2.309 billion yuan, coupled with the industry downturn this year, as well as follow-up investment considerations, made Powerchip’s third quarter revenues worse.

Moreover, from May of this year, Powerchip has transferred three 12-inch fabs and related businesses and assets to the 8-inch factory subsidiary, and this year, the goal of the company is not to lose money. The stock exchange will be completed next year, and it is expected to be listed in the name of “Liji Power” in 2021.

These factors have made Powerchip’s performance decline very badly. It remains to be seen what will happen at the end of the year, especially depending on how the market for the memory market changes.

Compared with the big ups and downs of Samsung and Powerchip, the performance of the grid is quite stable. Whether it is ranking, market share, or year-on-year growth in revenue, the change is relatively small, and its ranking is down one. The position is also mainly due to the rapid rise of Samsung.

In recent years, among all foundries, the grid core is undoubtedly the most eye-catching and the most varied. It not only abandoned the research and development of 10nm, 7nm and more advanced processes, but also sold several factories in Singapore and the United States in order to fight for light.

From the actual effect, this series of operation of the grid core is still possible, and still maintains the position of the second echelon in addition to TSMC and Samsung.
From the current international trade situation, its competition with TSMC seems to shift from advanced technology to intellectual property and business, which will be the focus of the industry.


For the semiconductor industry, 2019 is an extremely difficult year. Compared with 2018, the decline is very obvious, and these changes will directly reflect the foundry industry.
However, from the perspective of industry development and forecasting by all parties, 2020 or 2021 will improve. At that time, wafer foundries will also face new opportunities and challenges.