Water leaks in the laboratory were discovered in time late at night to avoid at least 24 million economic losses and at least one year of delay in the “Nine Chapter 3″… On November 25, five students from the University of Science and Technology of China were widely praised for their timely disposal of the popular network.

News (www.thepaper.cn) reporters learned from people familiar with the matter that on November 24, the Hefei National Research Center for Microscale Material Science reported that a laboratory leak was discovered in the early morning of November 21 and promptly disposed of to avoid huge losses. 5 students will be awarded a total of 120,000 yuan after tax. The first discoverer of the water leak was a student who went to the 01-004 laboratory to debug the program at 2 o’clock in the morning. The reason why I went to work in the laboratory at 2 in the morning was because I decided to temporarily add a set of data after discussing related articles the day before.

According to a notice issued by the Hefei National Research Center for Microscale Material Science, at about 2 am on November 21, the Psychology Building 06-004 Water leakage occurred in the laboratory, which affected the 01-004 laboratory. It is worth noting that the 180-channel superconducting nanowire detector in the 01-004 laboratory, if not disposed of in time, will cause at least 24 million economic losses and delay the “Nine Chapter 3” experiment for more than one year. . The 5 students were awarded a total of 120,000 yuan after tax. 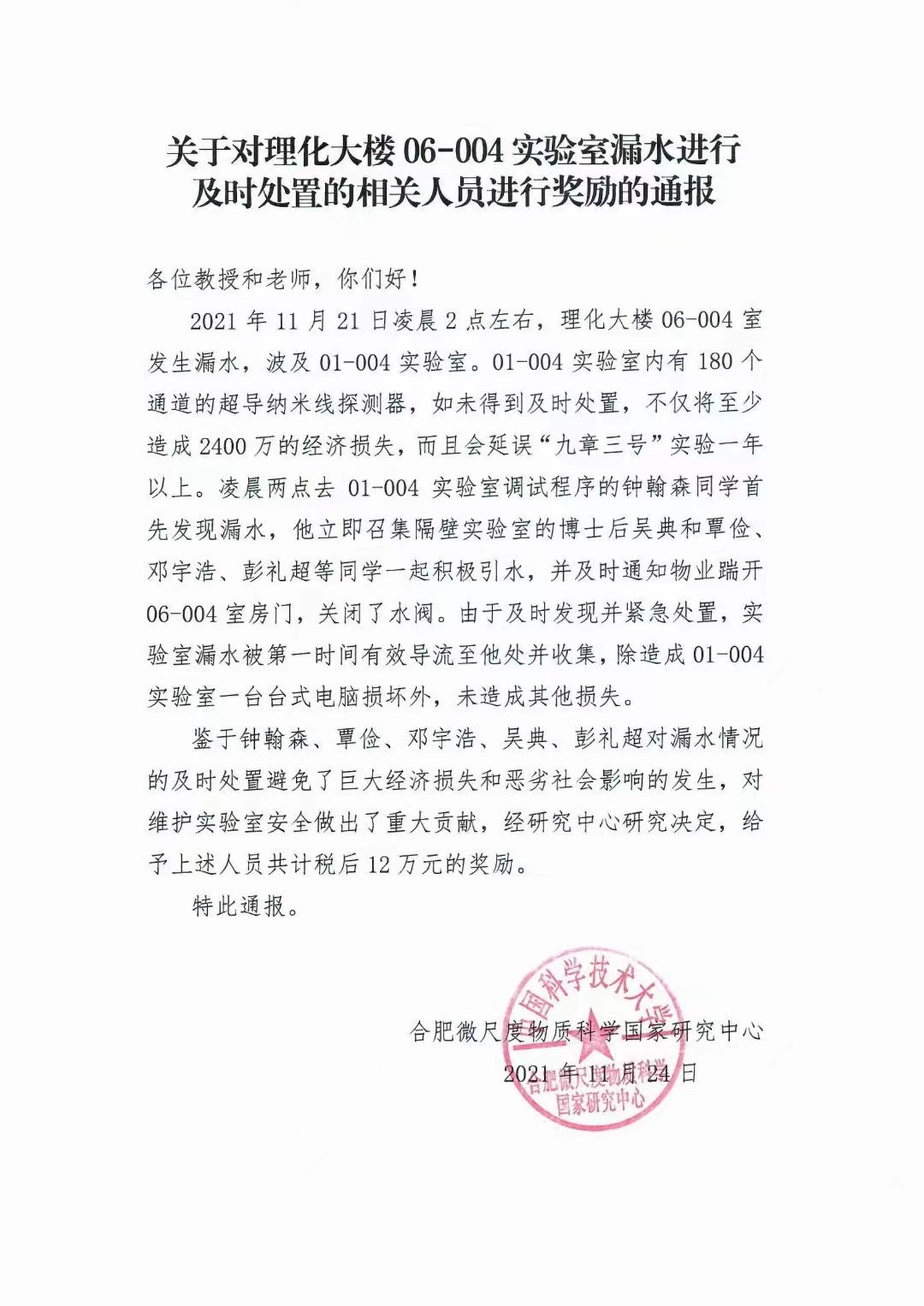 Hefei National Research Center for Microscale Material Science is a science and technology One of the six national research centers approved by the Ministry of Science and Technology in November 2017. Relying on the University of Science and Technology of China, it was established on the basis of more than ten years of preparations for the establishment of the Hefei National Laboratory of Microscale Physical Sciences. In March 2018, the implementation plan for the construction and operation of the micro-scale national research center passed expert demonstration.

In October this year, the internationally renowned academic journal “Physics Review Letters” published a paper in the form of “Editor’s Recommendation”. The research team composed of Pan Jianwei, Lu Chaoyang, Liu Naile, etc. of the Institute of Science and Technology Innovation cooperated with the Shanghai Institute of Microsystems of the Chinese Academy of Sciences and the National Parallel Computer Engineering Technology Research Center to developThe theory and experimental methods of stimulated amplification of quantum light sources have been constructed, and the quantum computing prototype “Nine Chapter 2” with 113 photon 144 modes has been constructed, and the phase programmable function has been implemented. “Quick solution of the Gaussian Bose sampling task.