Boeing 737 MAX airworthiness certification has ushered in the latest developments. 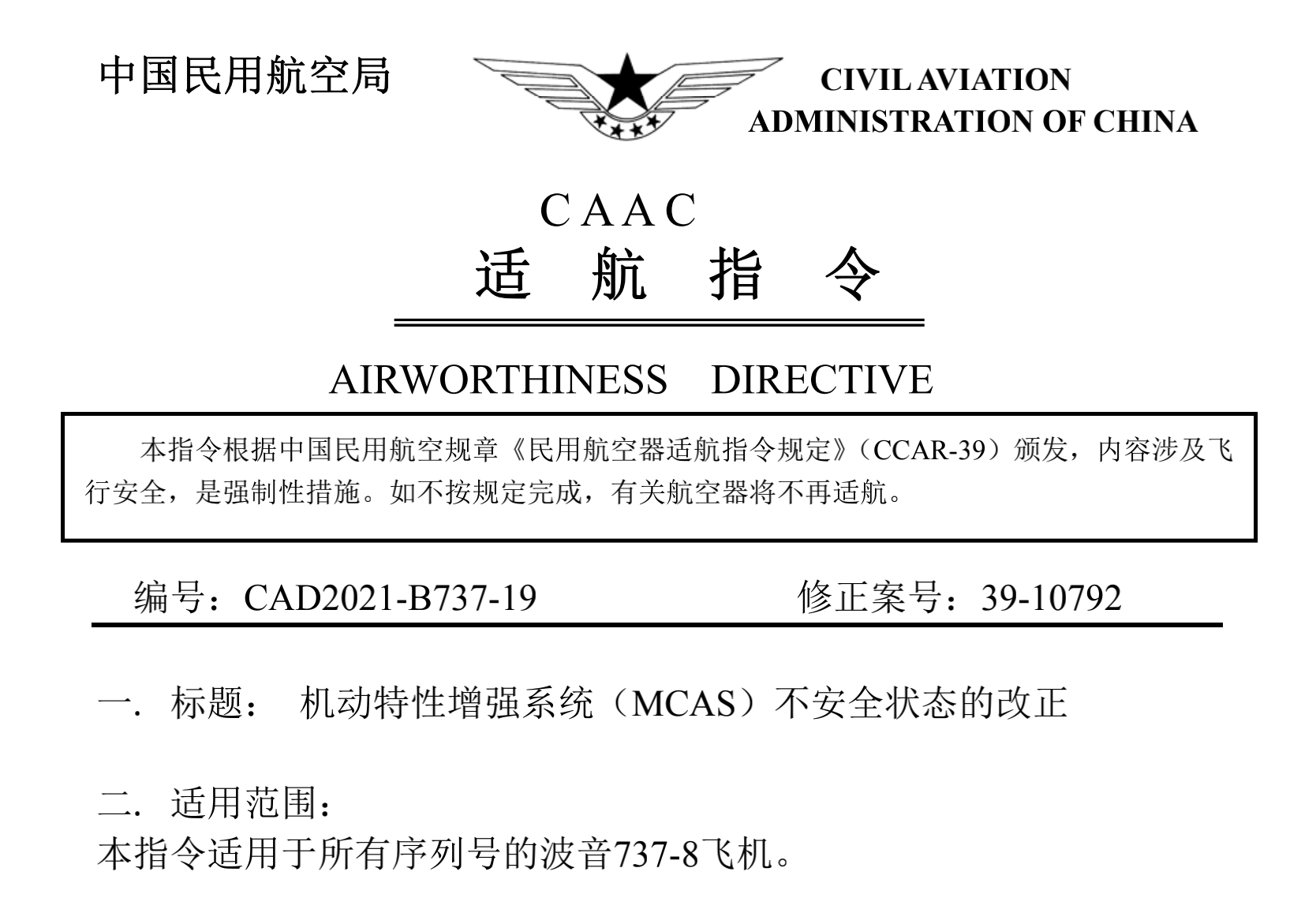 The document shows that the Civil Aviation Administration of China is submitting to Boeing’s flight control system software design changes, display system design changes, aircraft flight manual revisions, and horizontal stabilizers. After a comprehensive assessment of relevant corrective measures such as changes in trim wiring harness laying, it is confirmed that relevant corrective measures can eliminate the above-mentioned unsafe conditions. The directive applies to all Boeing 737-8 aircraft with serial numbers (Note: This is a sub-model of the Boeing 737 MAX series) one).

Based on the above situation, the Civil Aviation Administration of China issued this Airworthiness Directive to replace CAD2018-B737-19 and CAD2018-B737-21, requiring the implementation of the following corrective measures: flight control Installation and verification of computer operating program software (FCC OPS), MAX display system software (MDS) installation and verification, horizontal stabilizer trim wiring harness laying changes, installation of stall warning system lever shaker jump switch button (with colored keycaps) , The revision of the aircraft flight manual, the revision of the MEL, the test of the angle of attack (AOA) sensor system and the preparation of the operation for flight. 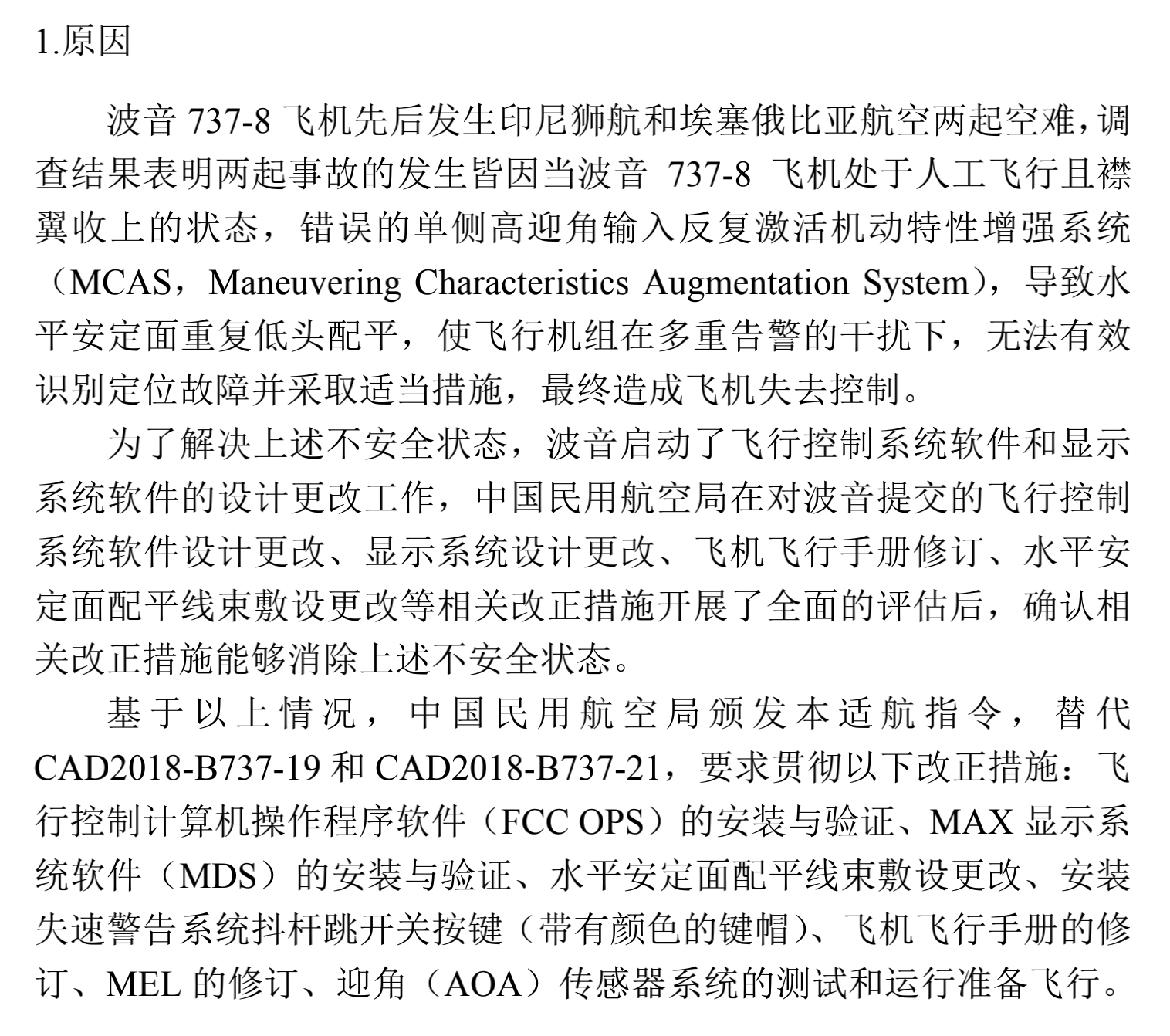 What is an airworthiness directive?

Chen Jianguo, a senior captain in the industry, told reporters that the standard definition of an airworthiness directive is that the airworthiness Unsafe conditions found on products (including aircraft, aircraft engines, propellers, and airborne equipment) that are likely to exist or occur in other civil aviation products of the same model design, compulsory inspection requirements, corrective measures, or use Restricted documents, the contents of which involve flight safety, if not completed in accordance with the regulations, the relevant aircraft will no longer be airworthy.

Chen Jianguo said that the issuance of this document can theoretically be said that the Boeing 737 MAX passenger aircraft can resume operations in China, but it still needs to wait for the final regulatory approval.

It is understood that the Civil Aviation Administration of China has repeatedly emphasized the three principles of Boeing 737 MAX go-around: design changes to the aircraft must be approved for airworthiness; the pilot must be fully effective Training; the conclusions of the investigation of the two accidents must be clear, and the improvement measures must be effective.

A relevant person from the Civil Aviation Administration told reporters that the return of the Boeing 737 MAX is still proceeding according to procedures.

Boeing told reporters that the decision of the Civil Aviation Administration of China is an important step for the safe resumption of Boeing 737 MAX operations in China. Boeing continues to work with regulators and customers to restore operation of the aircraft worldwide.

However, the promulgation of the Airworthiness Directive does not mean that the Boeing 737 MAX can go around soon. Chen Jianguo said that after the regulatory authorities officially allow the go-around, the specific progress will be It is up to each airline to decide and master it. In addition, airlines also need to train pilots.

According to a Bloomberg report on October 28, Boeing delivered only 62 737 MAX aircraft in the third quarter of this year, which was slightly lower than expected. Boeing said in the third quarter report disclosed on October 27 that since the FAA approved the 737 MAX to resume operations in November 2020, Boeing has delivered more than 195 737 MAX aircraft. The model is currently being produced at a rate of 19 per month, and continues to move towards the production rate of 31 per month in early 2022. The company is evaluating the opportunity to further increase the production rate.