It only takes a few yuan to a dozen yuan, and the IP territorial can be easily modified. Recently, the black and gray industry chain related to “IP proxy” has quietly become popular on the Internet.

On April 28, Sina Weibo released an announcement on the upgrade of IP territorial functions, announcing that it would open the function of displaying and commenting on IP territoriality, and launched the “Personal Homepage Level 1 Page Displaying IP territorial” “Features. On April 29, WeChat also announced that it will display IP territories on the public platform, and cannot actively close related displays for the time being.

Earlier, Zhihu, Douyin, Kuaishou, Toutiao, Baijiahao, Xiaohongshu and many other online platforms have announced that they will “public account IP” Territory”.

Small IP ownership has made many Internet celebrity bloggers and big Vs “overturned” frequently, and it has also become a business experience for many people.

Recently, news reporters searched for keywords such as “IP proxy” and “IP address” on multiple e-commerce platforms and found that illegally modifying IP territories through proxies has become a problem for many businesses. The way to make money, among them, the lowest price is only 4 yuan/day, and the highest sales volume has exceeded 100,000 copies.

The monthly subscription is only ten yuan, and the buyer says the service is not stable enough

A journalist consulted an e-commerce customer service on how to modify the IP address , the customer service sent a detailed price list, listing the approximate service types required by different connected devices such as Apple, Android mobile phones, PC computer ports, etc., and recommended a “quick and static” product to the reporter, and asked the reporter to Download software.

The reporter opened the software and found that the IP location can be changed arbitrarily according to personal needs, and the address that can be changed is a fewIt covers almost all major provinces, cities and autonomous regions in China. The customer service said that a half-hour free test can be provided, and you can pay if you think it is easy to use.

In terms of price, most of these IP modification software are charged monthly, quarterly or annually. The prices vary from low to high, and some are charged by the number of days. The minimum cost is only 4 yuan a day. , Weibo and other clients can modify the IP address at will. The monthly price is generally around ten yuan, the quarterly price is between 40-50 yuan, and the annual price is generally more than 100 yuan.

Among them, there are two types of software: “static” and “dynamic”. According to the introduction provided by the seller, each line of static software has only one fixed IP , and dynamic products have hundreds of thousands of IPs in each line, and the IPs will be changed every time they are disconnected and reconnected, so the price is more expensive than static software, about 4-5 times that of static software.

The reference price of IP proxy provided by the merchant

It is worth noting that recently, there have been rumors that some platform technology upgrades have made the proxy unusable. I tested it myself and confirmed that it should be able to be used on all platforms at present. However, “IP rules are constantly changing, and there is no guarantee that they will always be available.” “Dynamic products can be refunded, and the money will be deducted for a few days. Static products cannot be returned and can be bought again.” A seller in the top three sales on an e-commerce platform said. 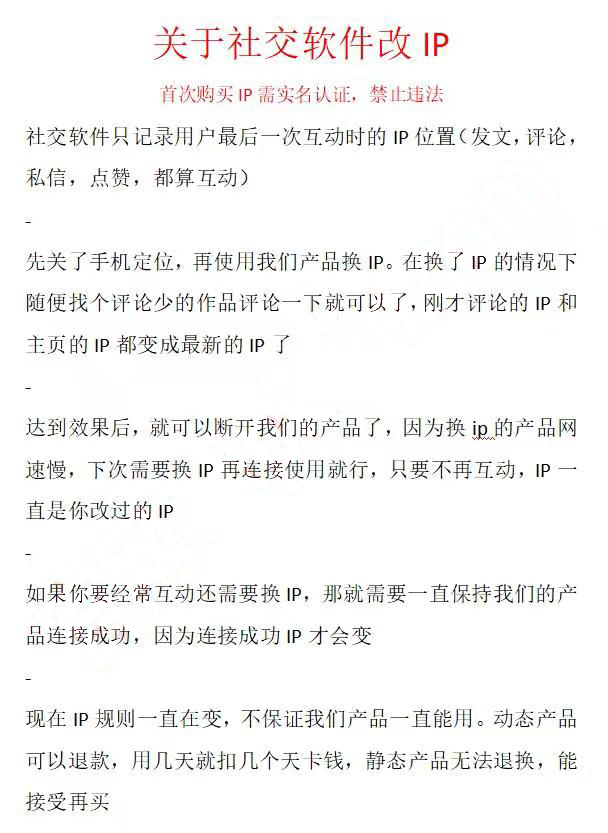 < p class="image_desc">The “IP change” instructions given by the seller

The reporter looked through the buyer’s comments in the comment area and found that most of these services are not “stable” enough. Many buyers who purchased such services said that , there are routines and scams: for example, when purchasing, it promises life-long maintenance, but after a few weeks of use, the network will be disconnected, and the seller will use this as an excuse to add a “guarantee” and say “you can use it and then return it to you. “.

In addition, there are also many buyers who encounter difficulties in after-sales rights protection. Once the purchased software cannot be used, the merchants often find various excuses to shirk, or ask for extra money. A buyer who gave a negative review said that once the purchased software was connected, the connection would be automatically interrupted, while the seller suggested “go to Baidu if you have any problems.”

It is worth noting that the reporter found on the Xianyu platform that keywords such as “IP proxy” and “IP address” could no longer retrieve the corresponding products, but use “” Searching for words such as “map label” and “whole network map” can still find a large number of sellers offering products.

Lawyer: It is illegal to build a VPN without permission, and users may risk privacy leakage when using it.

Through software, you can modify the IP territory with the touch of a finger. What is behind the What is the principle? Xia Hailong, a lawyer from Shanghai Shenlun Law Firm, told reporters that the IP territorial cannot be changed artificially. This purpose can only be achieved indirectly by changing the networking equipment used by users and accessing the network, using VPN (Virtual Private Network) and other agents. Internet connection and entrusting remote agent login are one of the ways to achieve this.

The “modification of IP territorial proxy software” currently sold on the Internet is mostly realized by building a VPN.

Using VPN or other means to modify IP territory without authorization, may it involve legal risks? Ji Yufeng, a partner of Shanghai Huiye Law Firm, told reporters that targeting individuals should be a dishonest act and must be illegal. However, there is currently no provision for administrative penalties. Considering that administrative means and criminal means should be modest, it is difficult to impose administrative and criminal penalties on users at present. “However, if you use the means of modifying IP to commit illegal and criminal acts, you can be punished according to the specific illegal or criminal acts.”

“For making or selling such software It must be suspected of illegal or even criminal behavior. This is a violation of data hijacking and falsification.From the functional point of view, the acts of illegal control, illegal destruction of data, destruction of computer information systems, etc., respectively or jointly, the corresponding crime may be the crime of providing tools specially used for invading computer information systems. Depends on the specific implementation function. “Ji Yufeng said.

Xia Hailong said that if users connect to the Internet through VPN without authorization, they will easily be led to violate relevant laws and build and operate VPN services without permission. It is illegal and may even commit the crime of illegal business operation.

He also mentioned that taking various “operations” to change the IP territorial area is very likely to give personal accounts It brings risks and affects the security of personal information. For example, publishing content on behalf of an agent in a different place has a great risk of divulging account numbers, passwords and personal privacy, and may also bear legal responsibility because the agent publishes illegal content without authorization. At the same time, online There are already some scripts circulating that can find the real IP of the user behind the proxy.