In this world, the core technology can’t be bought, only self-improvement.

Huawei Consumer Business CEO Yu Chengdong said in an interview with IFA (Berlin International Consumer Electronics Show) that Hongmeng System is basically ready! If Huawei’s mobile phone is not allowed to use Google services, it will consider enabling the Hongmeng system. The first mobile phone equipped with Hongmeng system may be the Huawei P40 released in March next year.

In the face of many opportunities and challenges in the market, is Hongmen really ready?

Dare to open source is an important signal for system originality

(1)Android: An open source project led by Google Inc., a mobile operating system based on Linux source code. On the basis of satisfying certain open source agreements, the source code of Android system is open to global manufacturers. The operating systems currently used by mobile device manufacturers such as Huawei, Samsung, and Xiaomi are all on Android systems, and are based on their own hardware features. Secondary development. However, due to the US ban on Huawei, Huawei may no longer be able to use the system. This is the direct reason for Huawei to launch the Hongmeng OS.

(2) iOS system: Developed by Apple in 2007, not open source, only provides external developers with secondary development interfaces for developers to develop apps that can run on Apple phones. . Therefore, iOS has so far only been used in Apple series mobile devices.

About the development and operation path of Huawei Hongmeng OS, from the news disclosed by Huawei Developers Conference, the open source model will be adopted. The open source time will be around 2020, and the domestic open source agreement will be preferred. The code will also be hosted on the domestic platform with great probability. Instead of the GitHub commonly used in Western countries, there are also open source plans and timetables on the conference site.

Based on the above information, the author judges that Huawei dares to choose the open source model, which stems from the self-confidence of the originality of Hongmeng system, because the source code is open, it is original or plagiarized at a glance. Dare to open source is an important signal of system originality. Of course, the final situation needs to wait until the 2020 generationWe will wait until the code is announced. We will wait and see.

What challenges will Huawei Hongmeng face?

Is it true that I can live? Not necessarily.

If plagiarism is directly spiked because of violations of relevant laws and regulations on intellectual property protection, then originality only represents the legal feasibility of marketing, and whether the mobile operating system can be widely accepted by consumers in the market, is it There are huge differences in the success of business. 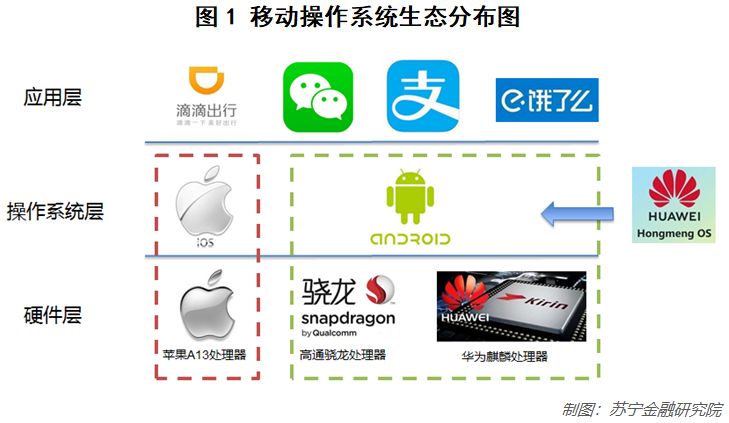 According to the current mainstream architecture, the hardware and software of mobile devices are divided into three levels:

(1) Hardware layer: It is mainly composed of various hardwares that make up mobile devices, including the screen, storage devices, communication chips, and the heart of mobile devices – mobile processors. Common mobile processors on the market include Apple Ax series processors, Qualcomm Xiaolong and Huawei Unicorn. It should be noted that the technical barrier of the processor is very high. Whether it is Apple, Qualcomm or Huawei, reaching the height of today, it has experienced the accumulation of a sword for ten years.

(3) Application layer: If the hardware layer and operating system are equivalent to the human body and soul, the application software is equivalent to a tool. Targeted services are provided to meet the different needs of customers (taking taxis, communicating, paying, and ordering). These applications are more concerned with user-specific needs. Under the blessing of these “tools”, smartphones have far more meaning to users than a simple communication tool.

As you can see in Figure 1, Apple’s operating system is only compatible with its own hardware, self-contained. In this way, the operating system and hardware can be moreAdd a tight fit to achieve overall performance optimization.

The author’s experience is that after long-term use (such as three years), Apple’s mobile phone is still smooth, but the Android phone may appear to be stuck.

From the information currently published, Huawei Hongmeng is more likely to choose the Android model.

Because of the complexity of the mobile operating system, its development and iterative evolution process is also a decade of training, in addition to the current popular iOS (Apple) and Android systems, as well as Nokia’s Saipan system, and Microsoft’s Windows Phone system, Details are shown in Table 1 below:

It is worth noting that the current mainstream mobile operating system has an iterative evolution history of nearly 10 years. For these mobile operating systems, this is not a simple decade. It is a decade of falling into the pit and crawling out. It is a decade of continuous discovery of vulnerabilities and tinkering. It is a new and constantly introducing new features. Year; is a decade of generations of research and development designers, painstakingly passed down. In January 2007, Jobs announced the first version of the iPhone and iOS system with great enthusiasm on the release platform. Today, Jobs has been away for 8 years, and iOS is like a 12-year-old child. Continue to evolve and thrive.

In a sense, it is unfair to take Huawei as the mature mobile operating system in the world. It is true that as a new operating system, there are few packages, and you can directly introduce the most advanced series. Technology, however, the lack of practical testing and polishing is also a serious injury.

This is like a 0-year-old baby competing with a 10-year-old child. It is not excluded that this baby is a genius. It does not rule out the possibility of overtaking in a corner, but for the difficulties and challenges that may arise during growth, we should Give more patience and support.

So, from a professional perspective, what challenges will Huawei’s Hongmeng system face? There are only three aspects:

A classic case is the design of Apple’s touch-screen keyboard. Before that, the mainstream design on the market was Nokia’s nine-square keyboard and Motorola’s clamshell design. The blueberry phone even moved the entire keyboard to the phone. The design of the touch screen keyboard of Apple mobile phone, WYSIWYG, makes the screen expanded without increasing the size of the mobile phone, and finally subverts the market and becomes the mainstream of today’s smart phones.

From the current disclosure of Hongmeng OS’s introduction data analysis, the system introduces the more advanced operating system design technology, “determine the delay engine and high-performance IPC technology to realize the system is natural and smooth”, “new micro-kernel design, own With stronger security features and lower latency, it’s undeniable that these cool technologies can bring system performance improvements, but the actual user experience improvement is enough to fight or even replace iOS and Android. to be observed.

(2) Ecosystem construction (hardware/software). As shown in Figure 1, the operating system is only the middle layer. It needs to be adapted and compatible with different types of hardware. It also needs to support countless apps. As of 2018, the number of mobile applications (Apps) on the Apple App Store reached 1.67 million. This order of magnitude, mobile apps are not independently maintained by any company, and it means that there are thousands of app developments in the ecosystem. In the development and maintenance of the corresponding applications, and continue to create value for Apple mobile phone users, leaving the support of the ecosystem, Apple mobile phone is really just a phone. Similarly, Android has a huge ecosystem that supports the continuous development of the system. As a newly born baby, the creation of the Hongmeng OS ecosystem has a long way to go.

(3) Policy factors. The launch of Hongmeng OS largely originated from the US ban on Huawei, although there are signs of easing now (on August 20, the US Department of Commerce extended Huawei’s “temporary license” for US products by 90%. Day), however, does not rule out changes in the follow-up situation. From the perspective of Hongmeng OS, on the one hand, once the situation deteriorates and the ban takes effect, Hongmeng OS may be turned positive by the fire line and become the mainstream operating system of Huawei mobile phones (currently the mainstream system of Huawei mobile phones is Android), which is rare for Hongmeng. Practical combat opportunities; on the other hand, limited by the ban, Hongmeng’s main use areas are in China, and some non-Western countries and regions.

What changes will be brought about by the launch of Hongmeng System?

Why does Huawei have to invest a lot of energy in developing the Hongmeng operating system? The author speculates that at least the following threeReason:

(2) Swords go astray and march toward mobile devices. If Hongmeng’s application in the smart phone field is a last resort (based on the upcoming ban, Huawei mobile phones cannot use Android), then Hongmeng in the car, sports health, wear, AR, VR, smart big screen, smart The application of audio and other equipment is considered to be a slant. As the smart device field (smart appliances, smart wearable devices, etc.) has just developed, there is currently no targeted operating system support in the industry. Many times only Android or iOS is supported, but many devices are in hardware and software, product functions and customers. There are differences in the demand areas, and there are huge differences with smartphones, so there is a problem with the adaptability of the system. If Hongmeng can be optimized and perfected according to market demand, it is likely to catch up with the intelligent east of the equipment. This direction can also be seen from the current position of Huawei’s top management. As Ren said: “We built this system in order to be able to connect all objects simultaneously. This is how we move towards a smart society.”

(3) Self-reliance, build and improve the ecosystem. As mentioned earlier, the operating system is an ecosystem. Only by getting more participants, more applications will have opportunities. Huawei has also done a lot of work for this. On the one hand, Huawei has spent US$1 billion to set up the “Yaoxing Plan”, based on innovative and commercial value assessment, and adopts a tiered incentive to encourage and reward in the Huawei ecosystem. Application developers; on the other hand, Hongmeng is designed to be compatible with Android, and many of them run smoothly on Android, which can be easily transplanted to Hongmeng. A sound ecological environment plays an important role in the commercial success of Hongmeng system.

Today, Hongmeng System is not a simple mobile operating system. It is like the Galaxy supercomputer twenty or thirty years ago, representing the Chinese power for the west.From the breakthrough of the technological monopoly of the countries, we can see the rise of the country, the responsibility of the enterprise, and the efforts of everyone. We are looking forward to the smooth launch and landing of Hongmeng, because in this world, the core technology can’t be bought, only self-improvement.