This article comes from the Public Game Research Institute (ID: yysaag), the author is blank, and Ai Faner is authorized to publish.

Fang Yu is looking for her bridge to the world.

“Urgent solve lock “Mouse Typing · Advanced Edition iii” or find a developer!” On November 13, 2019, Fang Yu slowly moved the mouse with his foot, selected Chinese characters, and knocked this jargon on Weibo. “Mouse Typing · Advanced Edition iii” is a software that most people have never heard of. To put it simply, it is an input method that can use the mouse to select strokes and then type Chinese characters. The unique function contained in the word “click input of the whole word” is called its own patent, and there is no similar product. In the software description interface, it reads: “I hope to bring convenience and interest to anyone who can’t type and be afraid to type.”

Fang Yu is looking for it. Fang Yu is not “cannot type” or “fear” type”. Fang Yu is a cerebral palsy patient who can only use the foot to control the mouse to complete the typing action.

Fang Yu is over 30 years old this year. She developed cerebral palsy 42 days after she was born. According to an interview in the Ningbo Evening News, the cause was an accident in the bath. Because Fang Yu suffers from the cerebral palsy of the hands and feet, there are symptoms of involuntary movements of hands and feet, and his ability to live alone is poor, and he has been taken care of by his parents.

With the efforts of his father and mother, Fang Yu went to see a lot of doctors everywhere. “The doctor said that she can only live to 17 or 18 years old,” said Fang Yu’s mother Wu Peifang.

Because the limbs are difficult to control and the speech is difficult, Fang Yu has never been to school since childhood, and no one has taught. However, Fang Yu is literate. She looked at the subtitles at the bottom of the TV and listened to the sound. She gradually began to read the words and spent three or four years. By the time she was eighteen years old, Fang Yu’s father, with the help of relatives and friends, pooled money to buy a computer for Fang Yu.

But the other side, it is not easy to use a computer. Her feet can move, but the toes are not flexible enough to use the keyboard to type and only browse the web. When Fang Yu uses the mouse, he needs to step on the mouse and move slowly and gradually.

About in 2000, Fang Yu accidentally discovered a software that can be typed by clicking – “Mouse Typing · Advanced Edition iii”. Fang Yu was very happy. She bought the unlocked serial number and started practicing. Through this software, she gradually became able to speak through the mouse. She started writing sentences, writing articles, writing blogs, chatting with others, and building her own public number. ……

The reason for Fang Yu’s help is because “Mouse Typing·Advanced Edition iii” can no longer be used completely. Fang Yu wants to find its developer, Mr. Li Jingwei, and then purchase an unlocked serial number, or let the netizen assist in the crack. 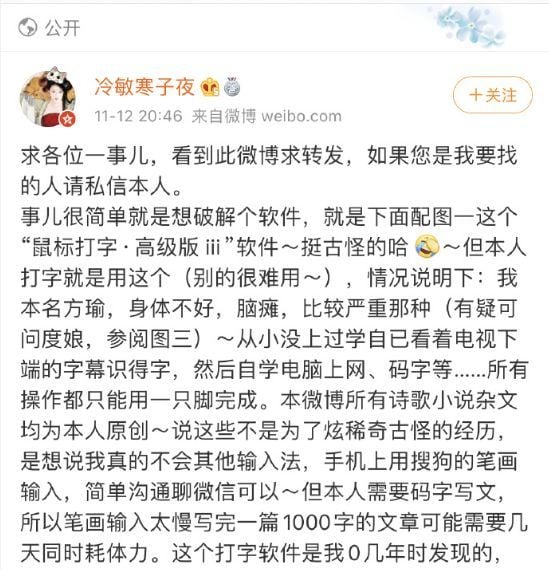 After a computer update, Fang Yu found that “Mouse Typing · Advanced Edition iii” could not be used, and could not contact software developer Li Jingxi.

In order to continue typing, Fang Yu can only extend the trial period by modifying the date of the computer. The problem is that the software is not completely unlocked, and the word association function cannot be used. Without this function, it is very difficult for the other party to use it. Invisible, I am struggling with codewords…”. And because the laptop can’t be misplaced, it can’t be used at the same time.

On Weibo, Fang Yu explained that she “is really not the other input method”. She can use the search on the mobile phone to make simple communication with the person, but she is going to write an article, even if It is a short 1000 words, and it may take a few days to use other input methods.

Overall, at present, the other side of the Yu is irreplaceable, the most convenient typing software. Fang Yu told me that her other software has been used a bit, but there is no such convenience.

Without bypass, Fang Yu sent a message on Weibo: “If you see this Weibo, please contact me. I have been looking for you for a long time, and thank you for developing this. The right input method!”

Fang Yu’s Weibo immediately received a response from netizens, and the amount of forwarding increased by thousands. Soon, Fang Yu received help from a good-hearted person. The contact information of the developer’s mobile phone number and postal mail from Mr. Li Jingwei came from all directions. But in fact, Fang Yu, who has been looking for Li Jingyu for many years, has used these methods to contact him, but the mail was returned by the system and the phone was changed to the owner…

Based on the softwareThe clues, the netizens began to find out all the relevant information of Li Jingwei, but most of them are not clear. 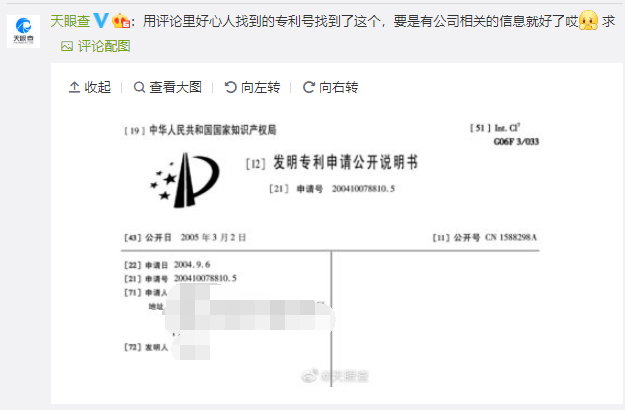 At the same time, netizens with software cracking capabilities have left their mailboxes, hoping to help Fang Yu to crack the software.

Soon soon, Fang Yu received a lot of cracked “mouse typing · advanced version iii”, but it is not ideal – the function is still not comprehensive after the crack, because at this time it is considered that the software that Fang Yu holds is not Due to the full version.

At the same time, there is also a bad news: According to people familiar with the matter, the original author of the software, Mr. Li Jingwei, has passed away.

Fang Yu heard that his family was only a 70-year-old man, and immediately urged everyone not to bother, and did not want to ask for software resources like the elderly. The goal of asking for help is then in the direction of “finding the full version of the software.” With the help of netizens, the software resources on different websites were found, but they were not successful.

At the end of today, not long ago, the event ushered in a turning point: a netizen who was involved in the cracking activity, the blogger named “sunwear”, found that the lack of function of the cracked version was not due to incomplete software. The software that was cracked again was sent to Fang Yu.

“You don’t have to worry about it, please let me know if you are happy with it.” Fang Yu sent this sentence on Weibo. This means that she can create it again.

At this time, Fang Yu sent out for help, but more than one day. This is an event that received 10,000 reposts on Weibo. The attention is very high. Fang Yu said that in this short day, she felt “warm and crying.” The developer trail that disappeared into the sea was found in the netizen relay, and the small software was cracked by countless hands. Fang Yu’s troubles were solved, but not.

Fang Yu is a person who loves words. Her public number “Song of Midnight” has hundreds of articles, and the message is: “Midnight is a weirdo, leaving the world, there is nowhere to go, nowhere to go, only to write regrets and good things in words…”. Her Weibo profile is “The Heaven and Earth Abandoned Son”, which is also filled with her countless creations, or poems or texts. 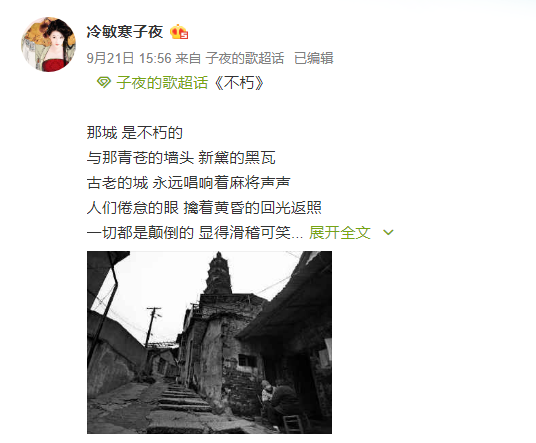 But connecting her to this world seems to have only such a small and worn bridge – a software that was no longer updated more than a decade ago.

It must be admitted that this is my first time searching on the Internet – and thinking about the problem of “typed by disabled people”. But the result is beyond my expectation: I originally thought that after so many years of technological development – electronic products have been replaced by a round, there are already many software available for people with disabilities to enter Chinese, but the search results tell me that here is still A desert – even the software that Fang Yu relies on for her livelihood is not customized for her.

A netizen sighed that a person with a disability was abandoned outside of technology. Fang Yu replied: “More than technology, sometimesOutside the fundamental crowd.”

There was a person on the page who could only use one-handed disabled people to ask questions: How can a disabled person with only one hand type? The response is to be patient, to study hard and to practice – or to cater to the ordinary people’s typing. 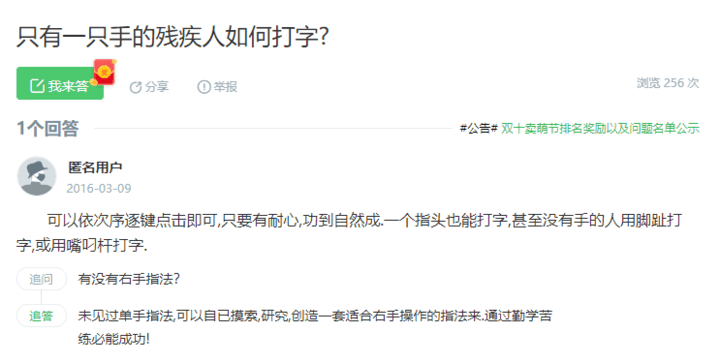 The only software that can cater to the above Yu is still very complicated and difficult to use for most people. There are many places to improve. However, Fang Yu has surprisingly called it “very advanced and suitable for the era of touch screens”, which is very convenient for people who are only literate and physically inconvenient. However, “Mouse Typing·Advanced Edition iii” is still buried in the Internet dust. “So it is really distressing, so it is so deserted…” Fang Yu said.

Fang Yu now has only one small wish, that is, someone or a company can buy this patent for use by people with physical disabilities. She told me that this should help a lot of people.

“My wings are broken, I need everyone to lift me to re-fly.”