YC is the vane of global seed round investment.

Editor’s note: In the field of venture capital, YC is undoubtedly a “Huangpu Military Academy.” In the past 15 years, YC has invested in more than 2,000 companies, and has created 100 companies with a valuation of more than 150 million US dollars and 19 companies with a valuation of more than 1 billion US dollars, including Dropbox, Airbnb, Stripe, etc. Has become a weathervane in the early investment field. This article presents YC’s investment logic through a large amount of data, analyzes YC’s investment trends, and explores future investment opportunities. This article was originally published on Meduim by Eric Feng, titled: What 15 Years of Y Combinator Investments Can Teach Us About Startups.

There are tens of thousands of smart people in the world. They can choose to start or not start a business, but as long as we work hard in the right place, a large number of new, A startup that might not have existed. ——Paul Graham, YC co-founder

I recently wrote a letter of recommendation to a former colleague who wanted to change his career by returning to school. He is not going to an ordinary school, but a special university with a long-established reputation worldwide. The admission rate of this university is very low, only single digits. You might guess that it is a Harvard or Stanford MBA? No, it is harder than these two schools. It is Y Combinator (referred to as “YC” for short). YC has been in operation for 15 years, invested in more than 2,000 companies, and produced 100 companies with a valuation of more than 150 million US dollars and 19 companies with a valuation of more than 1 billion US dollars.

YC wins by volume. Each foundation of a typical early stage venture capital company invests 30-40 startups in 2-3 years. YC incubates 8-10 times more startups each year. In other words, the number of companies incubated by YC can be invested by 30 VCs. YC has reached so many companies that it is actually an index for the entire early stage venture capital industry, just like the stock market’s Dow Jones Industrial Average. The Dow Jones Industrial Average is not a stock market, but it is certainly a representative of the stock market. Similarly, YC is not all a seed round investment, but the projects it chooses to invest in represent the weathervane of the entire seed stage investment and is an opportunity to discover industry trends.

What kind of startups does YC invest in?

Sometimes people think that YC has ideas on investment topics. But in reality, we are just investing in the best startups. ——Sam Altman, President of YC

To answer this question, I collected YC’s investment data since incubating the first batch of startups in 2005 and found some interesting phenomena. 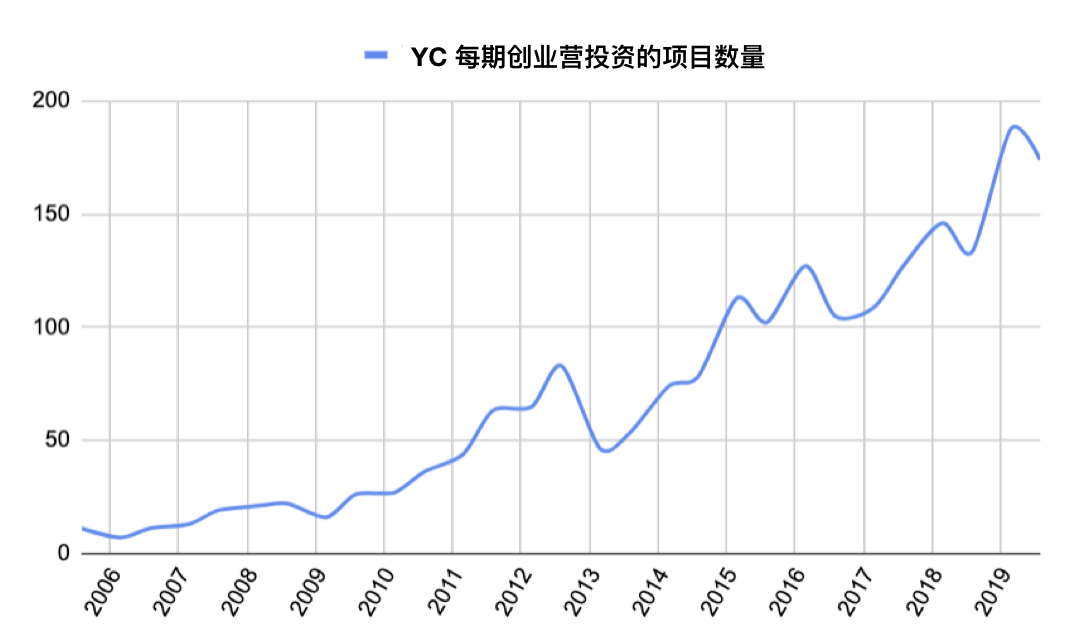 Picture: Number of startup companies invested by YC in each startup activity

This investment rhythm is surprisingly similar to the investment rhythm of the entire seed round in the venture capital industry worldwide. In the chart below, the red line is a multi-year global seed round transaction curve from Pitchbook. These two lines echo each other, and we can see that the number of startup investment in the seed round stage has increased significantly since 2011. 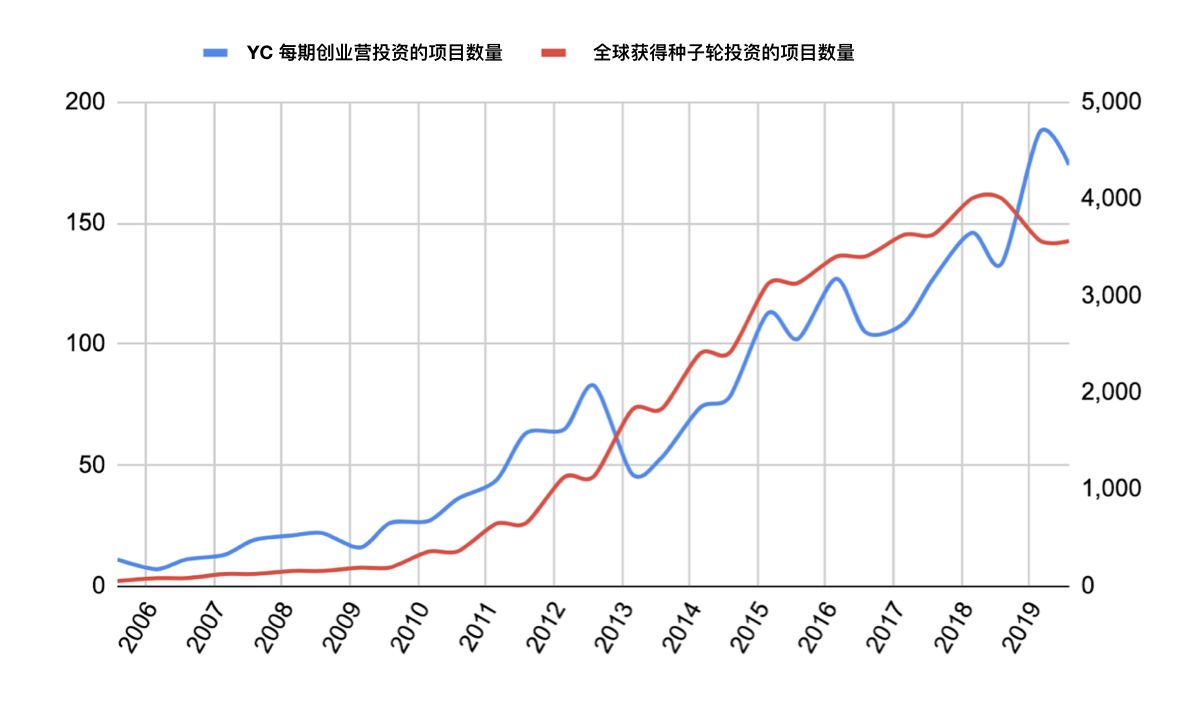 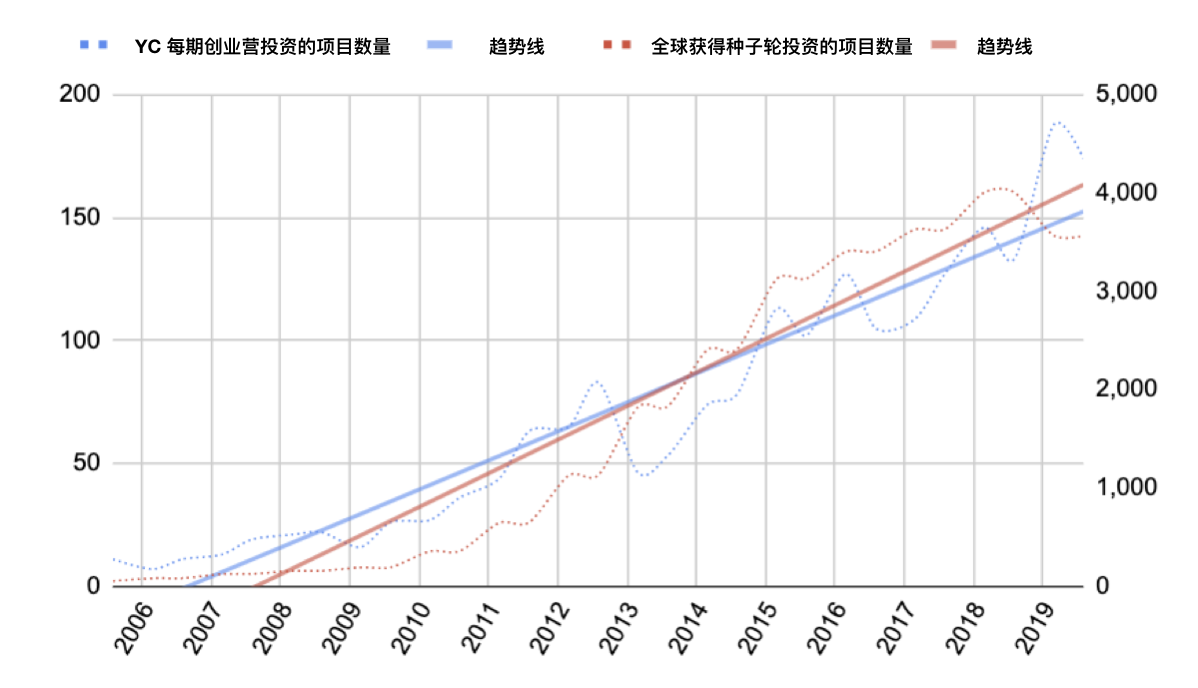 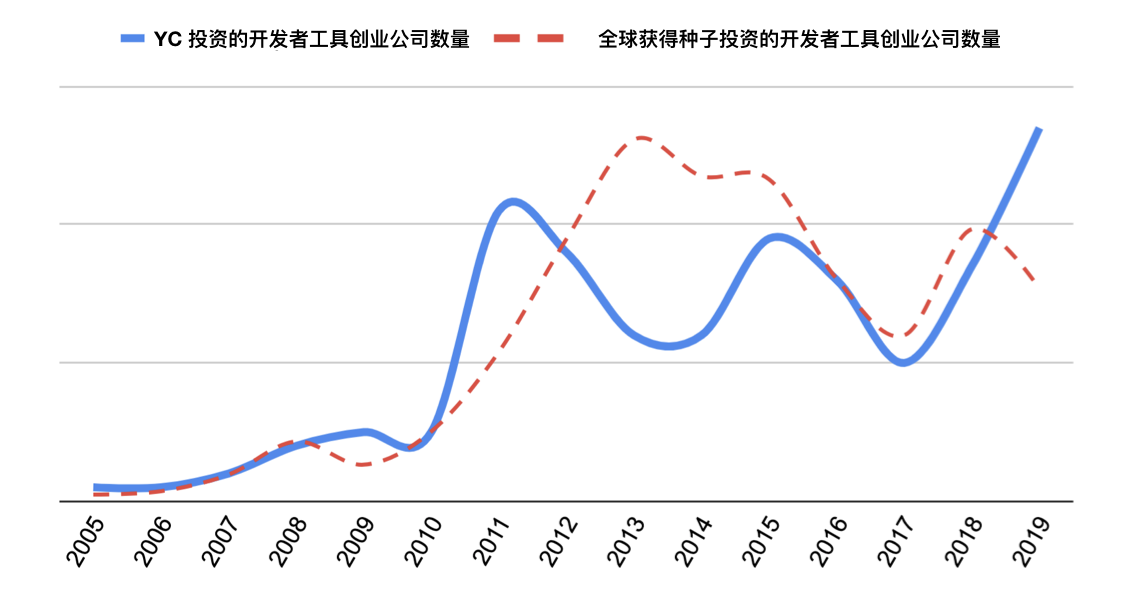 Through this mirror, you can learnTo something.

For more than a year, I have repeatedly emphasized that the current market situation is not conducive to consumer startups, and it is difficult for new consumer companies to stand out. A recent report from Sensor Tower stated that the top 1% of mobile app downloads accounted for 80% of total app downloads.

On mobile distribution, only a few companies are winners, and they are really big winners. Most of these winners are established companies that have appeared on the rankings for more than five years. In fact, according to App Annie data, statistics found that it is now 28 times more difficult for a new consumer mobile app to enter the top 30 of the App Store rankings than it was five years ago. 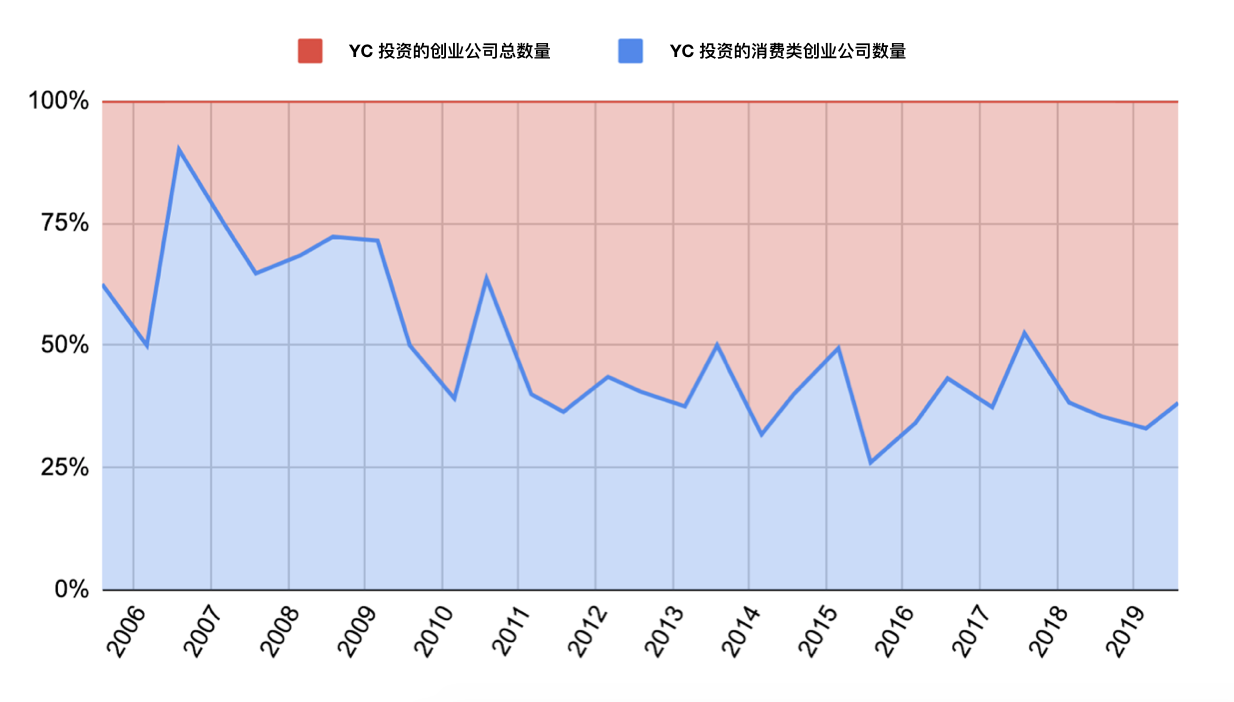 Figure: The proportion of consumer startups in the YC investee field

In the past 15 years, both inside and outside YC, more and more startups have received investment, and the enthusiasm for investing in consumer startups has subsided. How long will this continue? When do investors in this phase begin to invest in social networking applications, media, e-commerce companies, and other consumer companies? Are there opportunities for the next decade for founders who want to build products and services for personal rather than corporate use?

Maybe, or not. But no matter what, let us look forward to the next batch of YC’s next batch of startup camp projects on March 23, discover the seed round investment trends around the world, and explore the future development of startups and businesses.