Editor’s note: Everyone may have such a consensus: If a person has a criminal record, that person may be unable to move in this society. However, in the US Silicon Valley, a listed company set a precedent, hiring three full-time release officers full-time. This article is from “The Atlantic”, the original title is “What Happens After Prisoners Learn to Code?”, The author SIMONE STOLZOFF detailed the story behind the article. 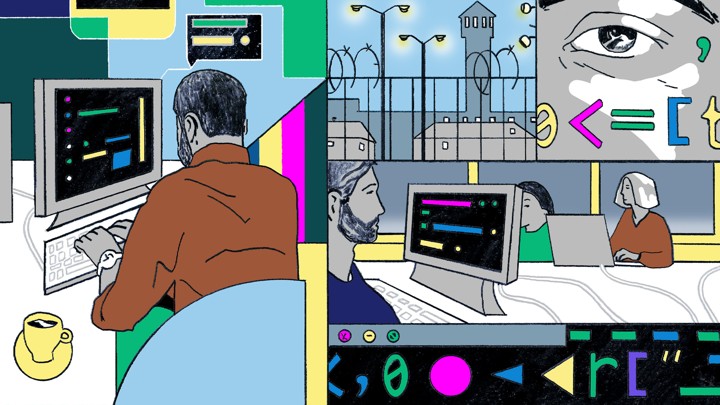 Jesse Aguirre is a member of the product team at Slack, a team collaboration tool. Every morning of the working day, he will participate in the standard engineering meeting within the team, and everyone plans the relevant work arrangements for the day together. Programmers also call this meeting standups. This type of meeting usually does not exceed 15 minutes, and all participants are encouraged to stand for the meeting.

Standing around Aguirre are employees from top Silicon Valley companies and graduates from top universities in the United States. Aguirre is 26 years old and graduated from high school. So far, most of his adult life has been spent in prison.

Slack is Aguirre’s first full-time employer. In the past few years learning and developing programming practices, Aguirre has developed a useful skill that may be necessary for all software engineers, namely the ability to think independently and solve problems.

Aguirre and two of his colleagues, Lino Ornelas and Charles Anderson, are an internal initiative of Slack called “Nest Chapter ) “Project. Next chapter project by Slack and The Last Mile organization providing training for prisoners and the K. Kellogg Foundation (the W.KKellogg Foundation) and other organizations or organizations to help those who have been in jail find jobs in technology.

Last year, when the next chapter project started inside Slack, it was just an apprenticeship program, and there was no guarantee that it would eventually turn into a full-time job offer. The author of the newspaper, Alexis C. Madrigal, wrote in a feature article, “Providing apprenticeships, rather than a permanent job, although there is not much difference in practice, many Lawyers who have previously defended inmates still call attention to the design of this project.

This appeal is indeed reasonable. Silicon Valley does always take some superficial measures to make the entire technology industry look fairer, but in the end it is “different words and deeds”, and there is still something to be done.

However, just a few days before Slack’s IPO preparations last June, Aguirre, Onellas, and Anderson all got full-time job offers from Slack and they also received stock options. For Aguirre and his friends, they face a new question: Can they do the job well?

Although getting “entry tickets” from top companies, this does not necessarily mean success. “Although a job is really important,” said Katherine Katcher, executive director of the California-based reintegration project Root & Rebound. “But going back to society is not so simple, if not For other support, a single job is usually not enough. “

For those released from prison, the risk of finding and retaining a job is very high. Almost 65% of people released from the California prison system have been jailed again for crimes within three years.

To reduce recidivism, providing a full-time job for those released from prison is one of the most effective solutions, but if a person spends most of his adult life in prison, ask him Finding a job is quite difficult. Based on a number of factors, including discrimination against people with a criminal record, and people who have experienced imprisonment, their unemployment rate is six times the national average.

A short time ago, Aguirre told me on the phone, “When I got a job offer, I felt like I was selected to enter the NBA while still in college. However, given my background, I also I feel like I have a lot to prove. “

Aguirre was first exposed to software development when he was imprisoned in Ironwood State Prison in a remote area of ​​California. The prison is known for its heat and gradual renovation projects.