The brothers in the industry chain “hold a group” to provide heating to Wuhan.

It was early in the morning. Yan Yunxia returned to the workshop a few days ago. She was the team leader of Rizhao Sanqi Medical & Sanitary Products Co., Ltd. (referred to as Sanqi Medical Insurance). The production capacity reached 1.5 million pieces, ranking high in Shandong, China, and even the global mask industry.

Yan Yunxia’s cousin, cousin and cousin all returned to the workshop. Also entering the workshop to work overtime was her 22-year-old son, who was very tall and was an intern at Qilu Hospital of Shandong University.

My son heard Yan Yunxia said that the factory where he was located was vacant and volunteered to be one of more than 100 temporary workers.

As of the first day of the new year, Sanqi Medical Insurance has sent 2.4 million sets of masks, more than 70,000 sets of protective clothing, and 28,000 protective masks to Wuhan.

Not only Sanqi Medical Insurance refreshed its production record, but also Lanfan Medical Co., Ltd. (referred to as: Lanfan Medical) more than 200 kilometers away from Rizhao is also racing against time. This is the world’s largest disposable PVC gloves. The manufacturer is also a leading medical device company with a complete layout of low- and medium-value consumables and high-value consumables.

They donated 1 million pieces of medical-grade protective gloves with the strongest protective ability and the lowest pinhole rate (above AQL 1.5) in the protective product portfolio. They were issued from Zibo on January 24 and will arrive in Hubei within a few days.

In this Spring Festival, Sanqi Medical Insurance and Lanfan Medical both entered an emergency “wartime state”, overcoming a series of difficulties such as labor, materials and logistics, and “embracing groups” with their brothers in the industrial chain for heating in Wuhan.

Ex-employees return to the factory to help them

Zong Peng, who is hurrying to work in Lanfan Medical Workshop

“It’s about medical protection. It can’t be sloppy,” he said.

When he said that, the screen of Zong Peng’s mobile phone flashed. It was a Chinese New Year greeting from friends and relatives, including the voice of his wife and two children.

At this moment in previous years, he can enjoy the 7-day holiday of the Spring Festival (note: generally from the 29th day of the first lunar month to the 5th day of the first month) and the joy of his children around his knees, one by one to reply to relatives and friends.

On the first day of this year, he hardly had time to look at his phone all day.

Under the call of “go all out for the epidemic without stopping production,” the black paper slogan calls, the production workshop in full load and full of 8 production lines is where Zong Peng and his team work overtime, 24 hours Three shifts “joint rotation”.

Taking a branch plant where Zong Peng is located as an example, the daily production capacity is 6.8 million pieces. Even so, it is necessary to work overtime and stock up. “This is a battle, the target is the epidemic.” Zong Peng said. 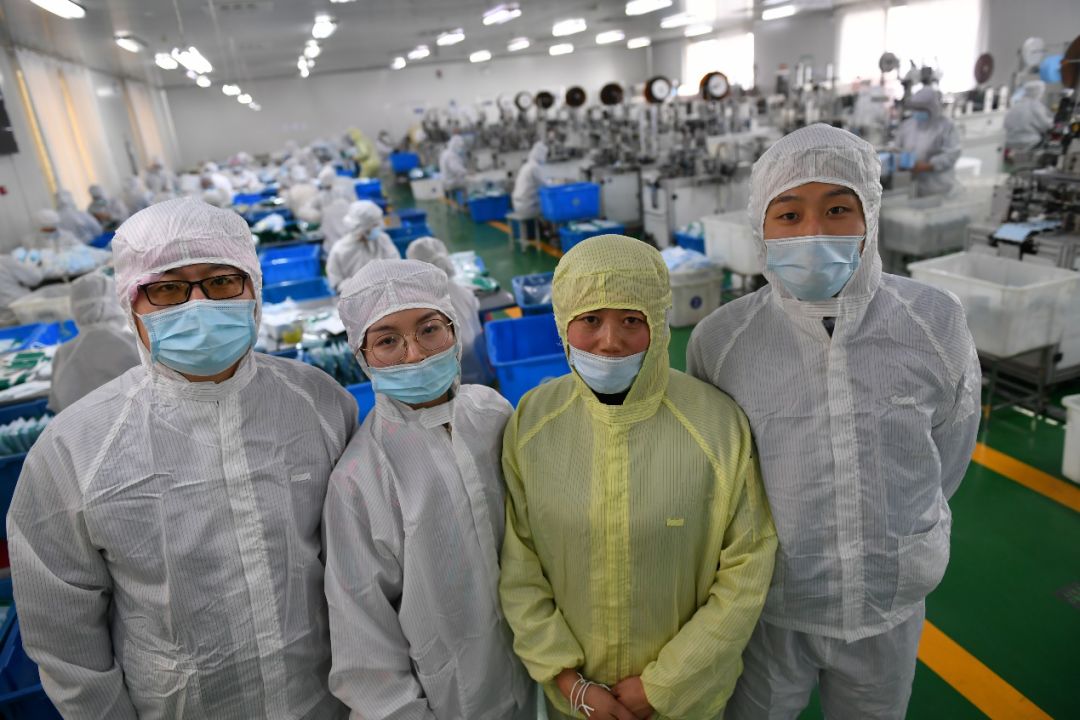 Yan Yunxia and others in Sanqi Medical Insurance Workshop

Some employees of Sanqi Medical Insurance chose to return, and Xu Jing was one of them.

She is skilled, and she has appeared in the production workshop with many old employees who have left the company, and used the Spring Festival holiday to work overtime in the old unit. “Home is a small home, the factory is everyone, we work together for the country.”

The epidemic is coming, prevention and control is paramount. In Sanqi Medical Insurance, with the return of “Yan Yunxia” and others, plus more than 100 temporary employees mobilized, their production records of medical surgical masks, medical masks, and disposable medical clothing continued Was refreshed.

A similar scene happened at Lanfan Medical. Zong Peng revealed that at present, all the workshops producing medical protective equipment, including a branch factory, are currently operating at full capacity. Even on this New Year’s Eve night, he and many colleagues spent together in the factory. “The company’s Logistics prepared dumplings. “

At least for the rest of the Spring Festival holiday, this “wartime state” will continue. Working alongside Yan Yunxia and Zong Peng in the factory area also included the leaders of Rizhao and Zibo leaders.