With the rapid rise of the blind box industry, various problems have also emerged. 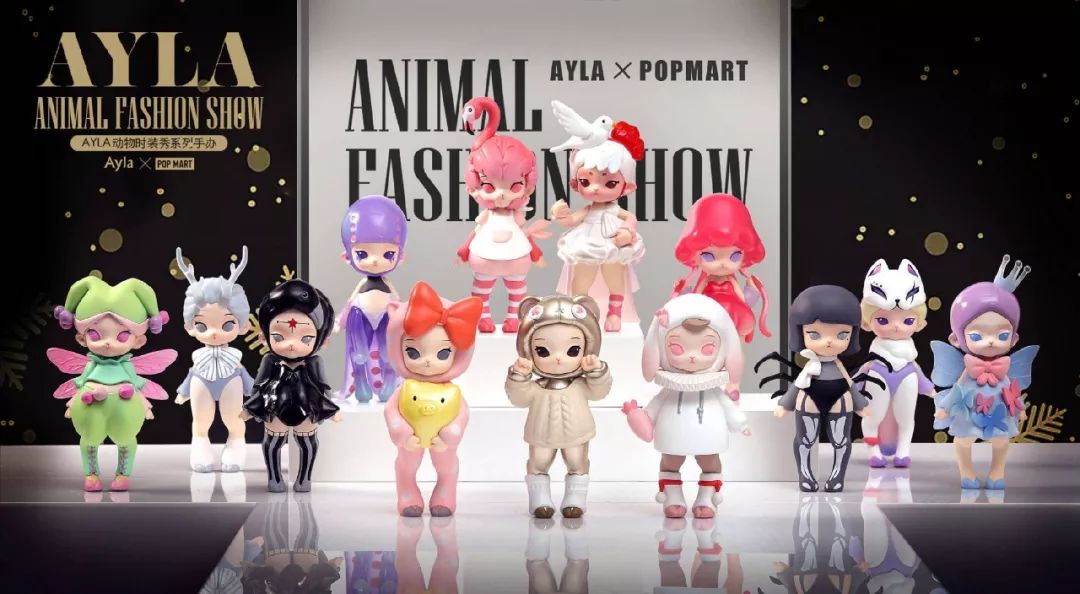 But then, AYLA, with sales exceeding one million, “rolled over.” Some netizens have revealed that Bubble Mart’s AYLA animal series blind box is suspected of plagiarizing the well-known “Wa Society” DollChateau (Chinese abbreviation: Doll Castle) released in 2017 by dolls such as Xisang and Trieste. At the same time, the actual release AYLA and the exhibition version also have gaps in details and quality has fallen.

B station named “China’s most disgusting company, profited 200w + from plagiarism overnight!” !! !! !! “The video playback volume is over 350,000, and the Up master also lists plagiarism elements in the video. Flamingo’s maid skirt, striped socks, and dragonfly clown are similar to DC dolls in appearance and color. The DC official also said on Weibo that there was no joint cooperation.

Although no authoritative voice has been voiced as to whether Bubble Mart is plagiarized, a set of 12 have “collapsed” elements with the DC family and the high degree of similarity has caused consumer dissatisfaction. Many people have asked Bubble Mart to withdraw paragraph.

Because of the special nature of blind boxes, products sold in Tmall flagship stores may be refunded and returned through the e-commerce platform. Refunded. 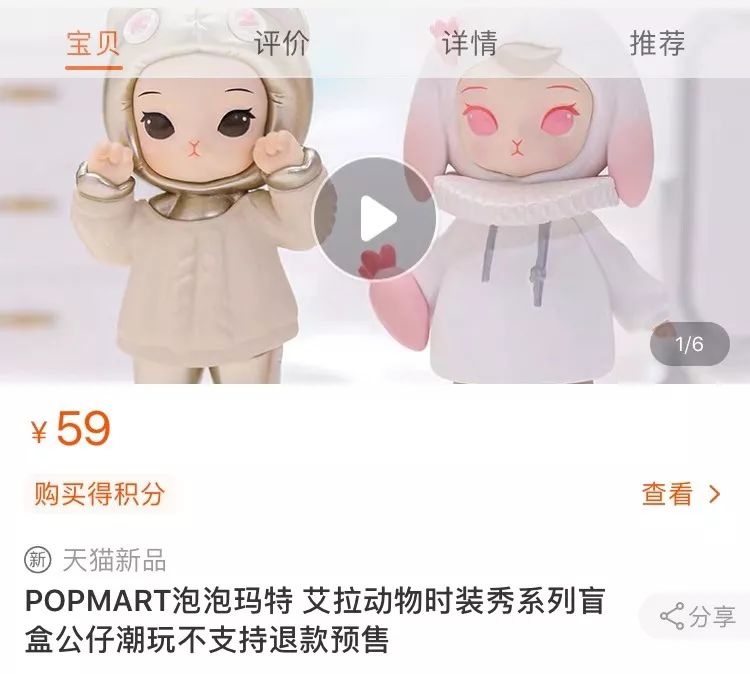 The rapid rise of the blind box industry has also caused various problems under its prosperity. The biggest value of the tide play business without the support of IP stories comes from its artistic design. Once a crisis of trust is created because of plagiarism, it is undoubtedly the biggest damage to the value of the blind box. For the creative industry, first of all, we must respect intellectual property rights, respect originality, and expand our original IP reserves, so that the Chaowan industry can develop healthily. It is imperative to be original. If you want to speed up the progress, you may wish to strengthen cross-border cooperation, which can not only expand the IP reserve, but also make the cake bigger and extend the entertainment industry chain.

The blind box with no background needs emotional empowerment more

In the “Double 11.” Lego and other international brands.

The blind box business has opened a tens of millions of markets, but many people still do n’t understand why anyone buys a small doll with a lot of money? Why does Bubble Mart suddenly appear overnight?

The root cause is because Bubble Matt has no “backstage”.

It is understandable that Elsa, the protagonist of Disney’s “Frozen”, sold 3 million skirts a year. It is understandable that the Pokémon derivative led by “Pikachu” has earned more than US $ 90 billion and became the “richest person” in IP because behind them Both have a world-renowned IP story. “Let it go” is popular all over the world, “Pickup Pickup” is known to all ages, but Bubble Matt has no IP story support.

Take Bubble Mart’s most famous Molly series as an example. Molly comes from the well-known Hong Kong designer Kenny Wong. There is no IP story.

No one specifically explained why Molly has big eyes, a muffled mouth, and the corners of his mouth are down, just like you do n’t know why Barbie is so slim, why Hello-Kitty has no mouth, why he is a little girl, but he has a small Cat face. They are all original IP images without IP stories.

There is no “backstage” and no IP story to open the market, but Barbie can still be favored by consumers 60 years after its birth. Bubble Matt can also stand out in the domestic toy market because they are all at a specific time Appeared to meet some psychological expectations of consumers.

The birth of the Barbie in the 1960s and 1970s was the era when the American women’s liberation movement flourished, and it was also the era when consumerism was paramount. After the Second World War, the prosperity of the US economy and the surge in the number of children have contributed to the popularity and popularity of Barbie.

Just like Business Week ’s evaluation of the Barbie brand, “She is not only a doll, she is a symbol of American society.” Barbie fulfilled the dreams of female consumers: mature, beautiful, and rich (Barbie has many alternatives. Clothes, bags, accessories) is also a reflection of the social concept of that era.

In September 2019, Taobao’s post-00s users increased by 31.8 million year-on-year, and the “Double 11” chop party increased by 100 million, also mainly young people. In the twenties, generation Z, who grew up in an open and inclusive Internet environment, is more able to accept trend culture and is willing to spend money on interests, personality and trends.

On the other hand, “girlishness” leads the mainstream aesthetics of society. Molly’s cute and ever-changing shape meets the “girly heart” of consumers, and her stubborn expression symbolizes the waywardness and opinion of the little princess. Today, women’s ability to think independently and maintain a carefree teenage mind are not contradictory.

Plagiarism is a fatal blow to the blind box

Because there is no complete IP story, bubble box’s blind box value lies in artistic value and collection value. Without background restrictions,Design is also more free. However, plagiarism has occurred under the circumstances of great play space, which is undoubtedly a fatal blow to the brand.

At present, the number of topics of # 泡 玛特艾拉 兔 俏 袭 # has reached 6.235 million. As the wave of returns for rights protection on social platforms intensifies, the brand reputation of Bubblemart will inevitably be affected.

By looking at the rapid development and expanded territory of Bubble Mart in recent years, it is also based on respect for originality.

In 2014, Sonny Angel from Japan brought over 30 million sales to the dealer Bubble Matt, which accounted for about 30% of the total sales that year. Inspired by this, Bubble Mart transformed into high-end fashion toys, and signed long-term exclusive sales and exclusive production contracts with many well-known designers. After the popularity of the Molly series, Bubble Mart has reached a comprehensive strategic cooperation with Fluffy House, Labubu, Meitou, Satyr Rroy, PUCKY and other IPs to achieve mass production.

In 2019, Bubble Mart has more than 100 directly-operated stores in mid-to-high-end malls in 52 cities across the country. These directly operated stores are divided into flagship stores, standard stores, IP stores and vending machines. 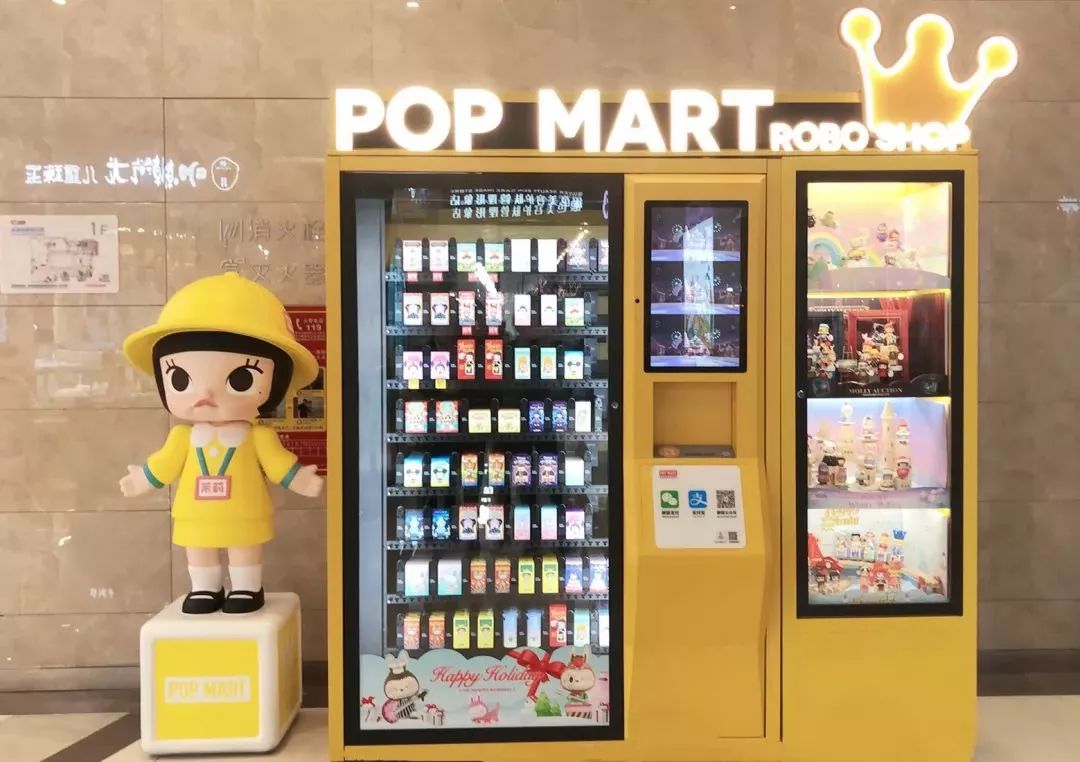 To meet the supply of more than 40 directly-operated stores with different specifications and different business districts, it is also a challenge for upstream. From Sony Angel to Molly and AYLA, in recent years, Bubble Mart has also continued to launch blind box series with different themes to expand the product matrix. The company has also ranked among the top players in tide play, reaching a valuation of 10 billion yuan. In the first half of 2018, Bubble Mart had a revenue of 161 million yuan and a net profit of 21,098,500 yuan, an increase of 1405.29% over the first half of 2017.

Bright style and exquisite workmanship are the biggest selling points of blind boxes. The form of blind box can evoke the desire to buy and collect. The process of drawing the image of China and Italy brought consumers a lot more surprises than step-by-step selection, ordering, arrival, and disassembly of express delivery. The satisfaction of collecting the entire series is also encouraging consumers to repeat purchases. 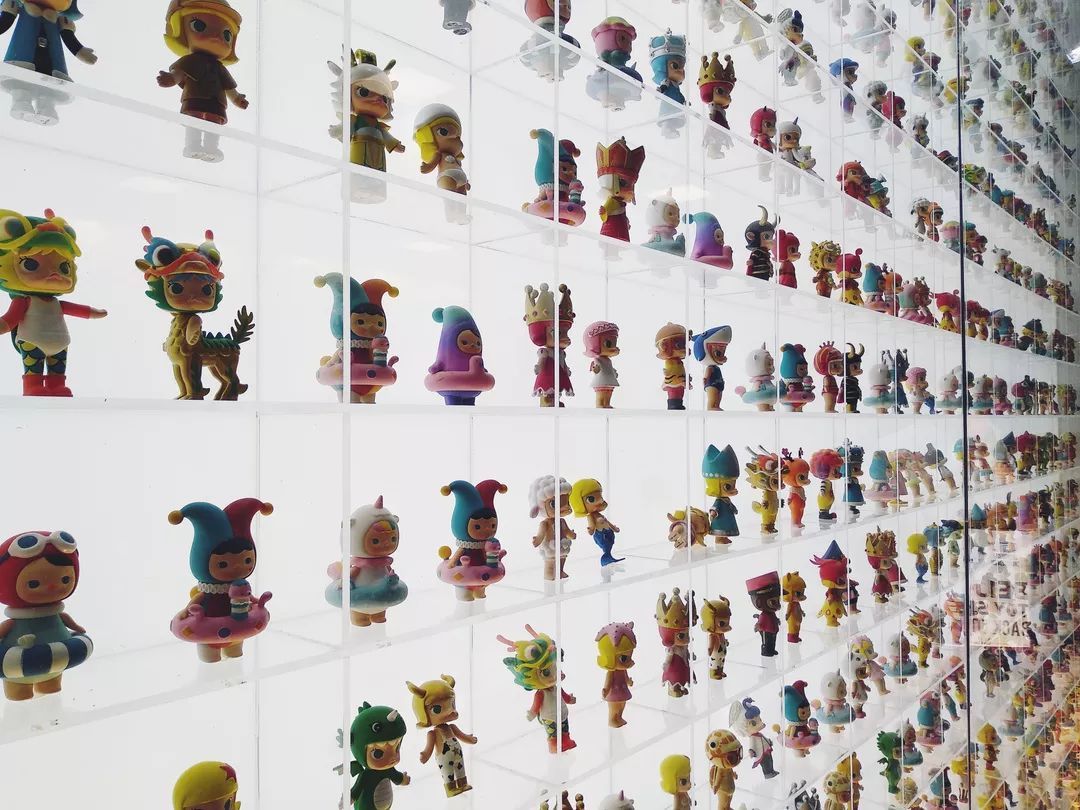 For many people, buying a blind box is a kind of “labeled” consumption. They buy trends and personalities. Therefore, people who start a blind box often “sunba” on social platforms.

Although the fun and emotional changes of the process are important, all consumer behavior must be based on the high quality of the product. As consumers in the AYLA Animal Series plagiarism storm said, “If it wasn’t for design, who would spend 59 yuan to buy a useless ornament?”

AYLA animal series is one of the few products of Bubble Mart to be notified on the same day and released on the same day. After the successful establishment of the business chain, the phenomenon of product quality decline has occurred, and the original ability has been questioned. Bubble Matt is “urgent”.

The essence of Chaowan industry is IP operation

Behind Bubble Mart’s art design is the commercial operation, and behind the blind box is the huge tide play market.

The tide play industry chain with IP as its core has a wide range from upstream design to retail and curation in the middle reaches to second-hand transactions in the downstream. 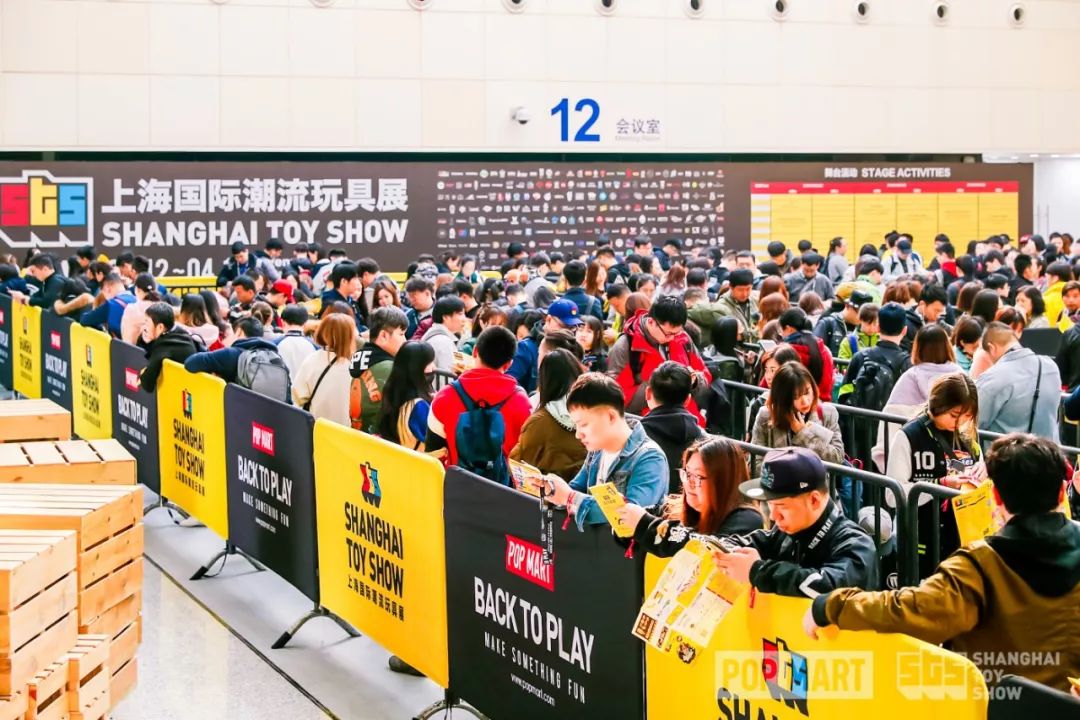 As the industry’s leading player, first respect the value of original art. On the one hand, we should strengthen our own original capabilities, and on the other hand, we should obtain other IP authorizations reasonably to be blind derivative boxes.

To strengthen originality, first of all, expand the original IP storage, seek cooperation with more high-quality designers, or incubate your own original designers.

Building an IP story is a path to explore further upstream, and of course means more effort. Without the background of the IP story, Bubble Matt can also learn from the Barbie series and combine it with the current social and cultural background to find new image selling points.

Slow work and careful work. If you want to maintain quality and quantity, you must keep your mind.

If you want to take a “shortcut”, it is also a good choice to open the derivatives market through cross-border joint names.

In 2019, the film “The Climbers” jointly launched the blind box of the six main characters in the film; “Chinatown Detective 3”, which missed the Spring Festival due to the epidemic, also launched Teddy through blind box marketing Bear blind box. The film co-branded tide play blind box is a propaganda and exploration of the field of derivatives.

From the previous joint names of Bubble Mart, we have more cooperation with well-known foreign IPs such as Disney and “Toy Story”. In the future, we can also join hands with domestic IPs to launch more blind and culturally-oriented national cultures box.

There are many application scenarios for Chaowan. In August 2019, Ruixing Coffee launched the “Meet Hao Ran” series of blind boxes, and designed a variety of dolls based on the spokesperson Liu Haoran. In October, Jiuyang also launched a limited-edition blind box with spokesperson Deng Lun, including 4 dolls. Although the blind boxes of Ruixing and Jiuyang are not sold to the outside world and need to be purchased to get random gifts, they have caused a great response in the fan circle. Liu Haoran’s blind box was looted by fans, and the Ruixing Coffee App crashed. 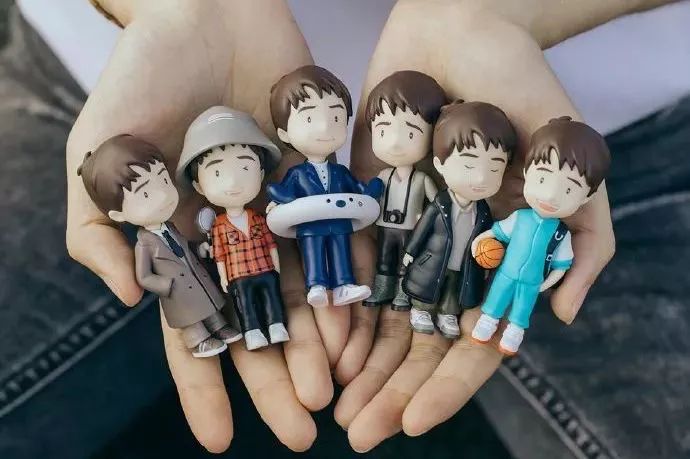 Blind box dolls independently designed and distributed by the brand still have a certain gap with professional blind boxes in terms of design and quality, but market verification has proven to be able to impress fans. It can be imagined that the form of brand + tide play in the future can also leverage the fan economy. 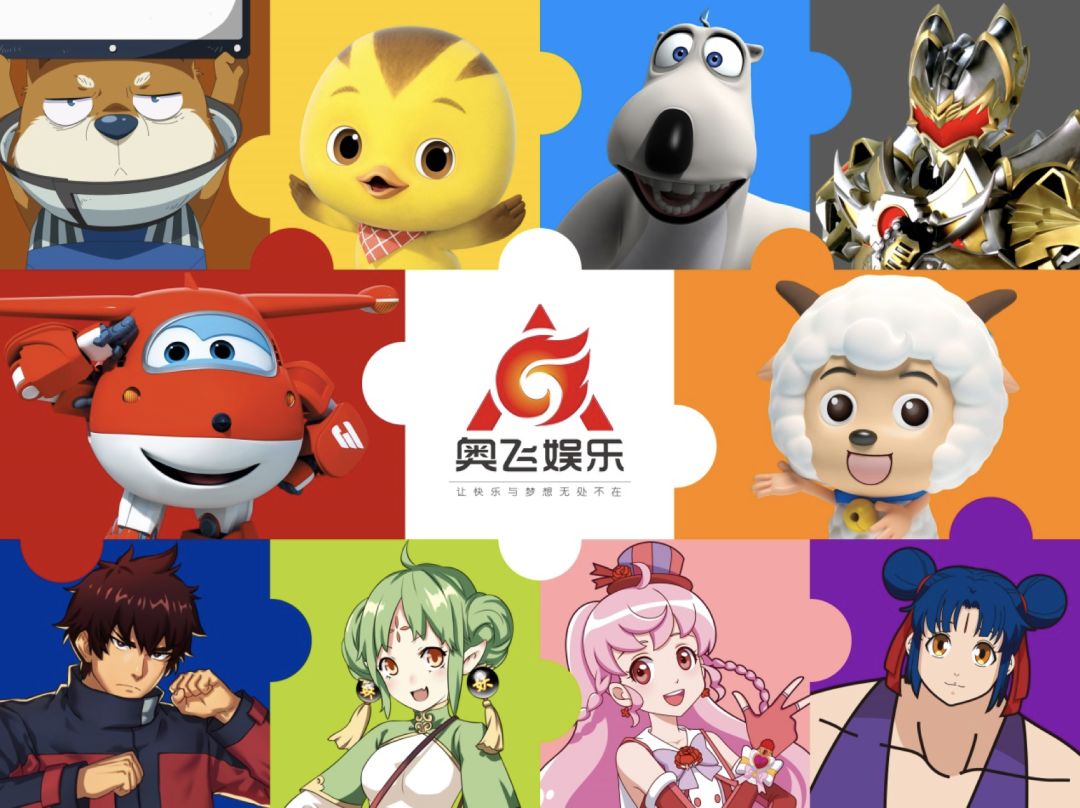 If the creation of original IP is a short board, then you may invest in IP co-branding, IP authorization, and cross-border development. With the current domestic IP derivatives market poised for growth and the economic prosperity of fans, there is still much room for further development.