Although the word “A” in “Project A” has not been abolished, the derivative card game “Legends of Runeterra” comes as expected. It opened the international service beta on last 24th. If you are interested and have the right network conditions, you can download and play now. As far as my personal trial experience is concerned, Runeland Legends is even more surprising than expected.

If you want to be good, you must first play the game. The first step is of course to go to “Runeland Legends” official website , register a fist account, then download the launcher to install the game, the current version The game size is about 300MB.

Although the current public beta only supports PC games, Fist promises that the official version will be available on Windows, iOS and Android at the same time.roid platform, and supports cross-platform real-time battle. The mobile version has so far been silent, but has already attracted more than 300,000 people on TapTap. With the huge fan base accumulated by LOL, the popularity of the game after its official launch is worth looking forward to.

▲ The end of registering with Chinese IP

In addition, there is bad news to tell you: The so-called “international service” refers to the European, American, Japanese, and Korean servers. If you want to use the Chinese IP to log in to the test server, you will be ruthlessly turned away. To this end, we must use a North American IP to register an account, otherwise an infinite error on the login interface will be a bad day.

After getting rid of all difficulties, you will find that … it is an English interface. Because there are too many proper nouns in the game, even if you pass the English level, you may not be able to play smoothly. Fortunately, February 6The 0.8.3.5 patch updated daily includes Chinese language packs. Exit after playing a game, go to the game installation directory and search for LocalizedText_zh_cn.bin. Rename it to LocalizedText_en_us.bin. Override the default language pack. After restarting the game, it will become Chinese.

Before I started the game, I once preconceived that Runeland Legends would be a derivative game created without much thought, and the model is also likely to “learn” directly from Hearthstone or Heaven. Artifact. But after the official hands-on experience, I was pleasantly surprised to find that Runeland Saga is more refined and deeper than I thought.

Consistent with other battle card games, both sides of the game have 20 health points, and the opponent’s health can be zero to win-in fact there is another way to win: use the upgraded “Wushuang” Sword Fiona card will kill 4 units and win directly. Of course, this victory method is too upset and generally not considered.

According to the setting of the backstory, the cards in the game currently belong to 6 Demasia, Freoldzold, Ionian, Noxus, Piltwolf & Zuan, and Shadow Island. Different camps, with subsequent updates, there will be more charactersMainland China and exclusive cards were added.

Players can choose 40 cards to build a deck, and each deck’s cards come from up to two different factions. At the beginning of each game, the player will use the 4 cards in the deck as the opening hand. After each round, an additional card will be drawn from the deck to add to the hand.

Cards are divided into three types: hero, follower, and spell. Hero cards are the main force of output, have higher attack power and health, and can be upgraded to obtain attribute improvements after meeting certain conditions. Follower cards, as the name suggests, have weaker attributes than hero cards, but are generally cheaper. As support units on the battlefield, most of them can provide certain benefits to friendly forces, such as improving the attributes of other cards or giving them “affixes”.

The so-called “affixes” are special effects attached to some cards. For example, the hero card “Lax” comes with an affix called “Barrier”, which makes Lax immune to the first damage. A powerful follower card, called the “Steel Spike Army,” can add a “barrier” affix to all of his cards, in other words, make them immune to damage.

As for spell cards, they mimic the skills of heroes in League of Legends. They are lighter effect cards and do not need to occupy a square on the field like unit cards. Spell cards have a variety of effects, ranging from improving friendly card attributes, causing damage, removing negative effects, and summoning extra unit support. The existence of magic cards makes the game more complicated, and using their special effects properly can even reverse the situation.

Each round, one player will be designated as the attacker, and the attacker will arrange it first. If there is no defensive card opposite to an attacking card, the attacker’s attack will directly deduct the opponent’s crystal. HP. The defender can then defend against the attacker’s cards. After that, it was the attacker’s turn to adjust the layout, and the defender responded again. This cycle went on and on until the two sides had no cards to play before entering the settlement. At this time, the cards of the two sides caught and killed each other on the field, and their health was deducted. Cards are considered dead. This creates two very different options for the attacker: Either use unreinforced cards to risk a quick attack, but reduce the gain or loss of the round; or carefully plan to maximize their own attack power, but also give Opportunities for opponents to carefully strengthen defenses.

Seeing a headache here? That’s true. The addition of affixes and upgrade mechanisms, the collaboration between multiple cards, and the mode of playing cards back and forth within a single round make it relatively difficult to learn Runeland Legends. The novice tutorials arranged by the game alone are enough for two hours. Just glance at the flow chart made by the netizens, you will know that it is almost impossible to complete the complex mechanism in an article: 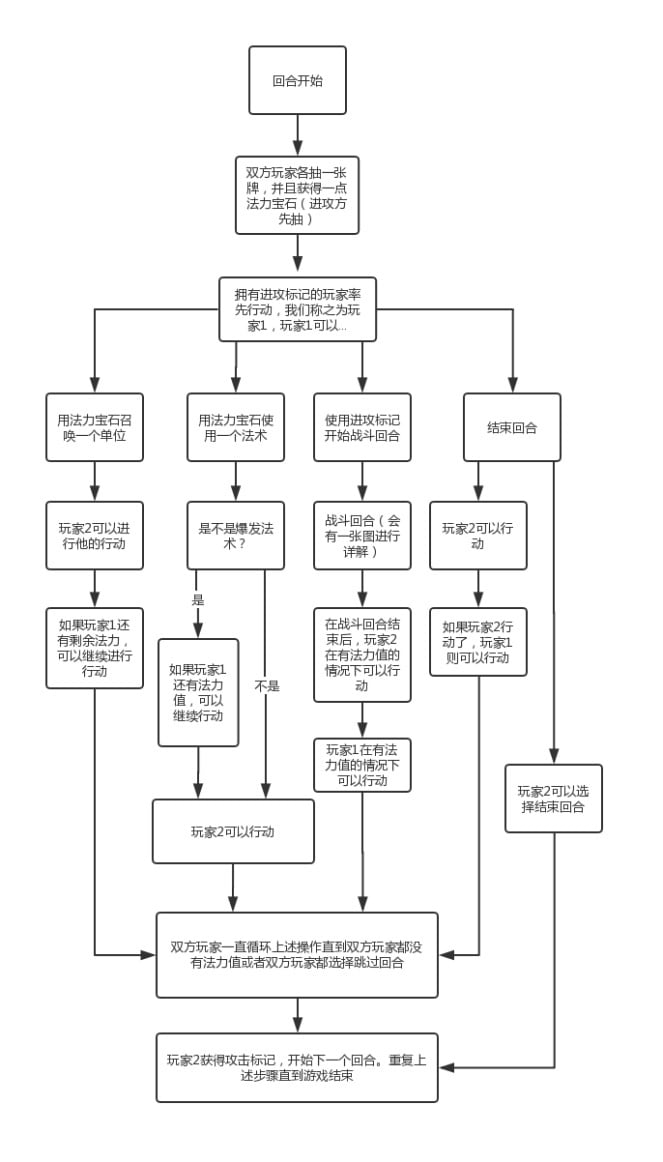 But as a hard return, the game ’s strategic depth has been strongly expanded. For those players who are interested in studying the gameplay, the extremely brain-warming strategy game of Runeland Legends will surely inspire him.

How fun is Runeland Legend? This is a matter of opinion. There is no doubt that it is a very “picking player” game. It is difficult to judge whether it is suitable for you without playing it for yourself. Therefore, I am not going to conclude the fun of it like the evaluation agency. Not to mention that it is still in the beta stage, and no one can tell what the game will look like in the future.

For me, the more interesting question is: Why does Fist make such a game?

In the early days of the League of Legends game, there was almost no background story. The designer simply divided the background camp for the heroes and created a weird setting that now seems a little ridiculous: In order to avoid raising soldiers in the rune land, the heroes were summoned to the “War Academy Resolve disputes through simulated battles.

▲ Interactive map of the League of Legends official website

Although the most popular LOL map today is still the “Summoner Canyon”, as the League of Legends has grown, the name of the Summoner has long been abandoned along with the past backward settings. They have been recruiting soldiers and horses to separate the hero from the identity of “summoned heroes” and becomeIndividuals struggling to fight against each other in their home country; at the same time, the creative team continues to expand the worldview and details of Runeland.

In 2017, the “League of Legends Universe” official website was launched. With a strong team of painters, Fist drew a large number of original original designs for various regions of Rune Land, hired professional writers to write millions of words of high-level derivative short stories, and even collaborated with Marvel to launch heroes such as Aich, Laxe, and Rob Theme comics. As the hero’s backstory has been rewritten many times, the characters in the theme story have gradually appeared, and the outline of the rune land has gradually become clear-although most League of Legends players never even knew the existence of the League of Legends universe.

In fact, letting the players know that the existence of the League of Legends Universe is the direction of fist efforts, and “Runeland Legends” is an important step to advance this goal.

The fist teamed up with German concept design studio SIXMOREVODKA and a group of independent artists to draw hundreds of new original paintings. Except for those heroes familiar to players, most of the original paintings are used to portray supporting characters and the lives of ordinary people. “Zitria in the Clouds”, an adventure in the large cities of Demasia, Ahi’s subordinates, “Avarosa Riding”, Yasuo’s younger brother “Windrunner Yongen” The wild animal “Enuk” of Relzold, the hawker selling poisonous puff mushrooms made by Timo … the supporting characters mentioned or mentioned in the official novels, and the three cults and ninth class members who should exist according to the current world view are all in ” The Legend of Rune Land appears as a follower of Card Fanmo.

Although the original paintings often only have a simple explanation, those familiar with the background story can know at a glance which city of these runes the characters live in. At the same time, their presence makes the rune place more vivid.