Outside of technology, the “humanistic threshold” of blockchain epidemic prevention

Among many public opinion storms, Hubei donated supplies, the disclosure of payment information, the management of medical aid to Hubei, and false reports of grass-roots epidemic tracking information, etc., have touched the hearts of many folk wild governors.

It also shows how important it is to build one or more transparent and traceable data networks.

Smart friends may ask, let multiple parties reach trust and consensus. Isn’t this the strength of the blockchain?

However, in the critical period when AI and 5G are on the battlefield to help fight the epidemic, we are seeing a sharp rise in bitcoin due to the risk aversion of the epidemic, and we are seeing the blockchain technology itself supported by the big names. Slightly eclipsed in epidemic prevention applications.

This can’t help reminding us of the chaos of the “coin going back into the chain” at the beginning of the industry. What is the potential of the blockchain, what can it do to fight the epidemic?

Blockchain epidemic prevention, what are these? Where can it be used?

On the principle of blockchain technology, we have done a lot of popular science before.

In simple terms, the data on each block is encrypted by a hash algorithm. Any change will be found to be inconsistent by the participating people. This constitutes that it is immutable and accessible to everyone, which helps A transparent and clear supervision chain is formed; the second is that the other blocks are connected to each other to form a transparent traceability chain.

So why can the above characteristics be used in this epidemic prevention work?

First, we need to maintain transparency in large-scale material management. We know that the epidemic prevention work has gathered many social charitable donors, but the information among donors, charitable platforms, and payees is asymmetric. How to manage these materials efficiently, timely, and credibly, and achieve mutual trust among multiple parties, the management department’s account management must be clear, verifiable, certifiable, irreversible, and irrevocable.

To avoid the black box in the process,There have also been incidents of direct delivery of materials to the terminal by helicopter. It can be seen that if you want to reach a consensus under the premise of multi-party supervision, using the distributed ledger of the blockchain is certainly more helpful for the public to build trust.

It also makes material management more efficient. In this epidemic prevention battle, taking Hubei, the most severe situation, as an example, the allocation of materials involves the synchronization and coordination of multiple hospitals in the province, and the central management of unified handling of materials is obviously prone to information out of sync and low update efficiency. The actual attrition of each hospital is unknown. At this time, if you want to cooperate with multiple parties at the same time, a “general ledger system” with multiple parties can obviously help material managers to more effectively grasp the situation and operate efficiently.

In addition to material management and disposal, the monitoring and aggregation of disease data also involves the collaborative work of multiple countries, provinces, and communities. How to make multi-party data flow and share safely under the premise of privacy protection, and provide for epidemic prevention work Support, a blockchain algorithm based on secure multi-party computing is naturally the first choice.

In fact, as early as 2018, in response to the Ebola epidemic, Jia Bainga Kangbai, a tropical infectious disease scholar at the University of Munich, Germany, created a blockchain database system SERIS to track the epidemic.

With SERIS, Ebola confirmed and suspected cases can be flagged and aggregated over the Internet. It also aggregates census data, traffic data and Ebola vaccine production and reserve data, etc., to provide decision-making basis for epidemic prevention and control.

How did a COVID-19 make the blockchain “robbed”?

In fact, during the epidemic prevention process, we also saw the role of blockchain.

For example, blockchain + charity, the platform does not need human intervention, and the system automatically adds a “time stamp”, which can help material donations to achieve transparent management and trace the source.

On February 7th, Alipay launched the anti-epidemic materials information service platform, which uses ant blockchain technology to review the information on the demand, supply, and transportation of materials, and stores the certificates on the chain without leaving any links. Black box. 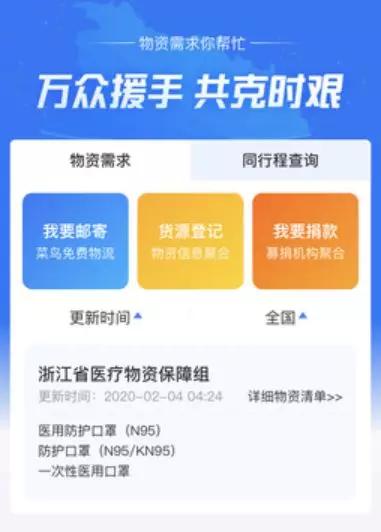 For another example, the blockchain combines the urban brain to provide collaborative management of epidemic prevention and control.

At the same time, the application of blockchain has also sunk into street community management. For example, the “Smart Pro Primary 2” platform in Linfen Street, Jing’an District, Shanghai, has realized mask appointments, registration to return to Shanghai, health check-in, visitor registration, and community in more than 20 communities, 688 merchants, and more than 20,000 visitors through block technology. Caring services, etc., not only enable many jobs to achieve contactless operation, but also provide evidence-based evidence.

Since the blockchain is not sitting idly by, why should we say that it is eclipsed? Compared with the application scale and maturity of other technologies:

On the one hand, unlike artificial intelligence and big data, which are blooming everywhere, from the development of vaccines to the investigation of information, the situation of innovative blowouts is different. Currently, the application of blockchain technology is still limited to individual cases, staying more at the trend level. In particular, it is represented by leading enterprises and regions with higher levels of intelligence, and the actual results have not yet been fully demonstrated;

On the other hand, the participation in blockchain epidemic prevention is also relatively limited. Unlike the grand event of artificial intelligence projects that quickly called for global developers to participate after open source on github, blockchains are compared regardless of the participation of enterprises or developers. Limited, subject to various restrictions on technology, computing power, and cost, it will be difficult to apply it to reality in a short period of time.

So, although the blockchain presents a more orderly, transparent, and trustworthy potential for social management, it still fails to play its due role in the intensive anti-epidemic process. Is there a feeling of “making the hero tearful”?

Besides technology, the “humanistic threshold” of blockchain epidemic prevention

WhenOf course, the blockchain is eclipsed, and the limitations of the technology itself are not the core issue. The main contradiction is:

First, the acceptance of blockchain technology by the society as a whole, especially the major donors, foundations, etc. is really not high, which has caused the promoters to be mainly technology companies, and the foundations have not taken the initiative. Introducing and putting data on the chain directly determines that the extent to which the blockchain is actually applied to the charity field is not high.

Second, the governance of public affairs by the blockchain is not a company model, and often requires multi-faceted coordination and cross-border participation to operate. For example, the aforementioned “Nansha City Brain” blockchain function requires The data of several bureaus, political and legal commissions, and health departments have been thoroughly opened, and the platform side needs to verify this.

For areas such as Hubei, which are already suffering from the epidemic, it is clear that neither technology, consciousness, nor energy is sufficient to establish such a co-ordinated governance mechanism within the entire time.

Third, blockchain is a comprehensive solution for cryptography, database and other technologies. The application of its technology is also in the exploration stage. Therefore, the cultivation of industry talents also takes time to mature, and the industry lacks unified standards and talent quality. It is also difficult to verify the knowledge structure, which makes it difficult for social institutions to efficiently and comprehensively build a talent matrix when introducing this technology, which naturally promotes nowhere.

At this point, it is not difficult to understand that the use of new technology as a weapon for epidemic prevention tests not only the maturity of the technology itself, but also the humanities’ accumulation of technology in the entire society. Only fertile soil can make the most of technology.

This is why we have many new tools for public affairs governance in our hands today, but their progress is full of setbacks.

As Brecht said, the purpose of science is not to open the door to infinite wisdom, but to draw a line in front of infinite fallacy. Hope these fallacies will one day not cost humans blood.