What should gaming consumers think of 315?

On March 3, the Chinese Consumers Association issued a notice through its official website that “Online game operators should effectively protect consumers’ legitimate rights and interests.” Coinciding with 315, in accordance with past practice, the competent administrative organ will strengthen supervision and management of various enterprises, and pay attention to a series of issues such as product sales, quality, and service feedback from consumers.

However, due to the impact of the epidemic this year, the 315 evening broadcast will be delayed. The specific broadcast time has not yet been notified. 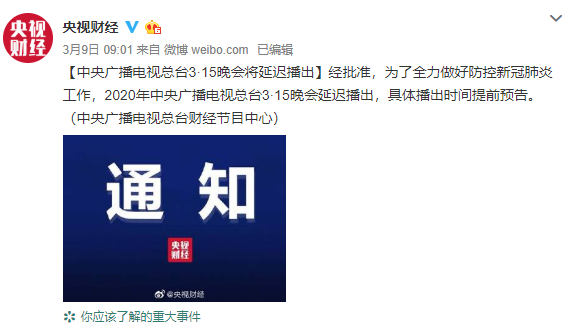 For this 315, we will start with the two major aspects of game company’s promotion and operation for players, and give tips on the content that may easily cause complaints about game compliance issues. 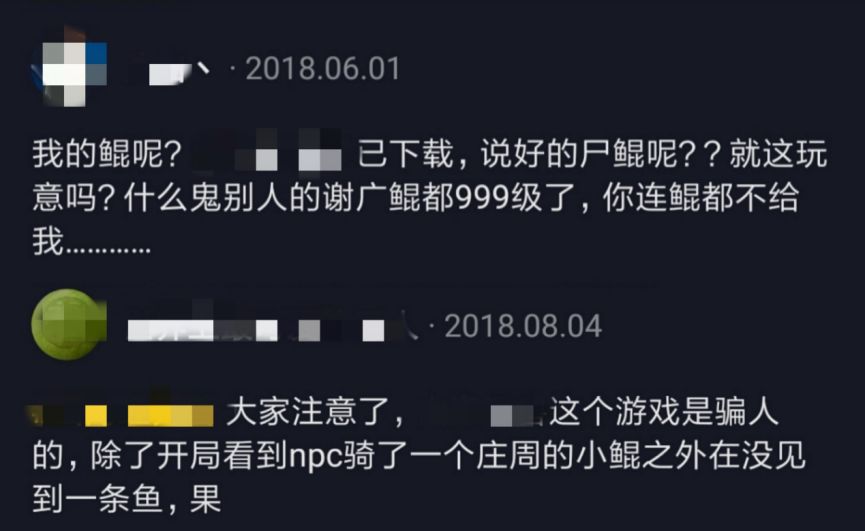 It is understood that many game companies currently use alien beast images and devouring themes as eye-catching materials to attract players to download games in videos that promote games, but in most cases, players actually download games and Without such images and storylines, many players are dissatisfied.

Because the goods or services to be promoted do not exist, such advertisements belong to the situation stipulated in Article 28, paragraph 1 of the Advertising Law, which are suspected to constitute false advertisements and cause user complaints. We can also see from the latest notice issued by the China Consumers Association that administrative agencies will begin to focus on the authenticity and consistency of online game advertising. If it is finally determined to constitute a false advertisement, it will be possibleFacing a fine of more than three times and less than five times of the advertising expenses, if the advertising expenses cannot be calculated or is significantly lower, a fine of more than 200,000 yuan to less than 1 million yuan will be imposed.

In addition, many buying companies will choose the current popular IP material as the promotion material absorption, such as popular film and television dramas, popular animations, etc., but the actual game content is not related to the used materials, Such advertisements may also constitute false advertisements and face the risk of administrative penalties. In addition, if the game company directly or prominently uses the characters, storylines, and other content of movie and TV drama clips or animations in the advertisement, it may make the player mistakenly think that the game product is adapted from the authorized party. Risk of high claims from unfair competition.

Scenario 2: Promised promotional items such as high-value items and super-high discounts are not fulfilled

In order to attract players to download games, game makers will also launch promotional activities such as “online delivery of items” and “100 yuan gift packages for only 1 yuan”. However, if after downloading it is found that the gift items have not been obtained, the hundred yuan gift package still needs to be purchased at the original price, and players will tend to initiate complaints because they realize that their expected benefits have been damaged. Such advertisements whose promised information is inconsistent with the actual situation may also constitute false advertisements in accordance with the provisions of Article 28, paragraph 2 of the Advertising Law. 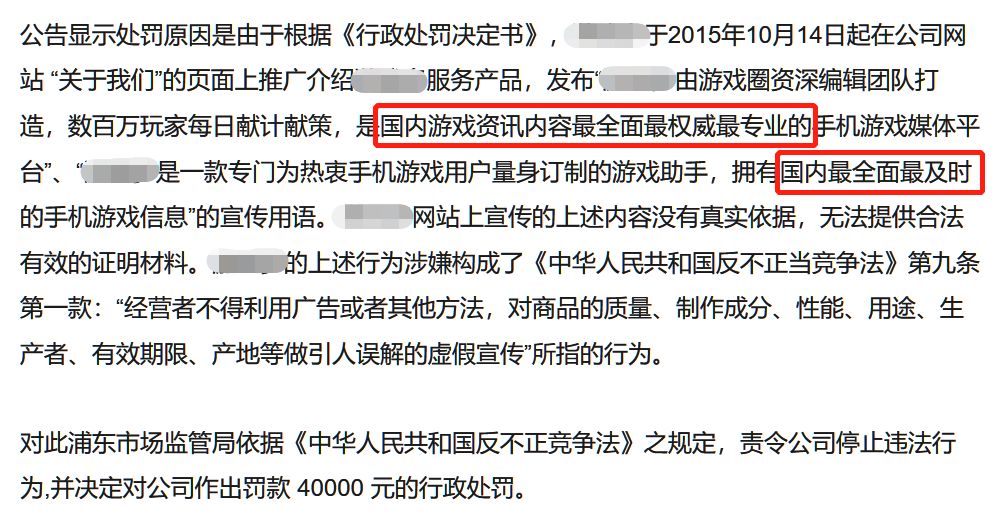 As early as 2015, the Market Supervision Bureau had determined that a game company ’s use of the words “most authoritative and professional” and “most comprehensive and timely” on its official website constituted false propaganda on the grounds that there was no real basis. And punished the enterprise.

Although we still often see expressions such as “the most fun mobile game”, “ranking the top of the entire network”, and “reaching world-class levels” in promotional texts, in fact “best fun”, The “first” cannot be verified. In addition to constituting the “proper quality of goods, sales conditions, user evaluations, honors, etc.” commercial propaganda restricted by Article 8 of the current Anti-Unfair Competition Law, it also belongs to The situation specified in Article 28, paragraph 3 of the Advertising Law constitutes false advertising.

At the same time, the terms “best fun” and “world-class” are also the limiting terms prohibited in Article 9 of the Advertising Law. The market supervision and management department has the right to charge more than 200,000 yuan to 1 million yuan. Fines below $, or evenThe company’s business license is revoked, so game companies should be careful not to use it.

Actually, the content of the “User Agreement” belongs to the format contract clauses unilaterally formulated by the game company and cannot be modified. According to Articles 39 and 40 of the Contract Law, such format clauses that exempt themselves from liability are not Of course it is effective, the game company should prompt the user’s attention in a reasonable way, otherwise the effectiveness is flawed.

Also, although the virtual items purchased by players are under the control of the game company, the game company has the ability to change the special effects and image of the virtual item, but consumers decide to purchase the virtual item based on the special effects and image at the time of purchase. The choice made by the game company without authorization will lead to the deprivation and infringement of the player’s autonomy in choosing which products to buy and which services to refuse, and will also cause the actual products provided by the operator to be inconsistent with the samples and violate the Consumer Rights The provisions of the Protection Law should be corrected.

Scenario 2: Information is not disclosed as required

According to the requirements of the “Notice on the Management of Mobile Game Publishing Services” and the “Notice of the Ministry of Culture on Regulating Online Game Operations and Strengthening Post-event and Post-event Supervision Work”, game operating companies not only need to set up special pages in the game to indicate copyright owners, publishing The information about the service unit, approval number, and publication number must also be publicized in time in the game or on the official website of all virtual props and value-added services involved in the gameplay. Ensure that the information is true and valid. Otherwise, once a user complains and verifies that the game company may face administrative penalties.

The edition bureau released the “ Communication on Preventing Minors from Addicting to Online Games ” at the end of 2019.”Knowledge” emphasizes that game operating companies should establish and implement a real-name registration system before January 1, 2020. At the same time, they should strictly control the period, duration and recharge service of minors using online games.

All regions have subsequently issued further measures to implement the notice, requiring game publishing units and operating companies to coordinate with the game industry association and publishing management departments to implement the anti-addiction system. Although no cases have been found at this stage that lead to game companies being punished, under the trend of stricter policies and regulations, it is not ruled out that game companies may cause administrative penalties due to user complaints.

Responding to the above issues that may cause complaints from users of game content compliance, we suggest the following:

1. Game companies should check as soon as possible the above-mentioned contents and videos in the current promotional and promotional use and correct them in a timely manner.

According to usual experience, the administrative department will focus on the compliance issues that caused large-scale complaints from users during 315, and will not rule out that users will complain about other compliance issues of the game due to dissatisfaction with advertising content. Therefore, we recommend that game companies focus on whether the promotional materials used during this period are true and consistent with the actual content, features, storyline, and special effects of the game. If it is difficult to grasp this, it is recommended that the company provide relevant materials for evaluation and use.

2. Make sure that the user agrees to confirm the content of the “User Agreement” before entering the game, and reminds the user of the format terms such as exempting company responsibility or aggravating user obligations in a reasonable manner, such as underlining and bold font.

Although game companies are currently paying attention to setting up exemption clauses in the “User Agreement” to exempt as much as possible from their service relationships with consumers, such exemption clauses set in the “User Agreement” Whether it works is questionable. For example, whether the agreement has been confirmed by the user’s own click, whether the user is reminded to reconfirm after the agreement is updated, whether the terms of exemption or aggravating the user’s obligations have been promptly noted in a reasonable manner, etc., these will affect the user agreement and its Effect of Terms.

3. Reassure users in time and confirm their specific needs.

Under normal circumstances, users will not directly complain to the administrative department about the content of the game, but will first choose to report the situation to the in-game customer service platform. At this time, if a colleague of the company’s customer service department receives a user’s complaint about compliance issues such as creative materials and game content, he should pay attention to listening to consumer demands, soothe the user’s emotions and confirm their specific needs. If necessary, the customer service colleague can ask the user Cooperate with the relevant circumstances to provide proof materials for the company’s internal verification before replying.

Even though the administrative departments will strengthen the supervision of enterprises during 315, but the game companies effectively fulfill their obligations in accordance with laws and regulations, and maintain active communication with players when user disputes occur, I believe 315 is just another The opening of a new plan