The stock price of Liangpinpu has exceeded 44.5 yuan per share, and its market value has reached 17.8 billion yuan, which is an increase of 273.95% compared to the issue price.

As of the analysis of Liangpinpuzi’s IPO, in the past less than a month, we have published a trilogy article targeting the three “small giants” of Chinese casual snacks, which are

On February 21, 2020, the snack company Liangpinpu issued an initial public offering listing announcement, announcing that 41 million shares will be listed and traded on the Shanghai Stock Exchange on February 24, 2020, and the amount raised will exceed RMB 420 million.

On February 24th, the good product shop (603719.SH) was officially listed on the Shanghai Stock Exchange. On the first day of listing, the good product shop’s opening price rose to 17.14 yuan / share, an increase of 44.03% (issue price 11.9 yuan), and the total market value reached 6.87 billion. yuan. From February 25th to 26th, the stock price of Liangpinpu rose continuously, reaching 20.74 yuan / share, with a total market value of 8.317 billion yuan. As of March 9, the stock price of Liangpinpu had exceeded RMB 44.5 / share, and its market value reached RMB 17.8 billion, a 273.95% increase compared to the issue price. 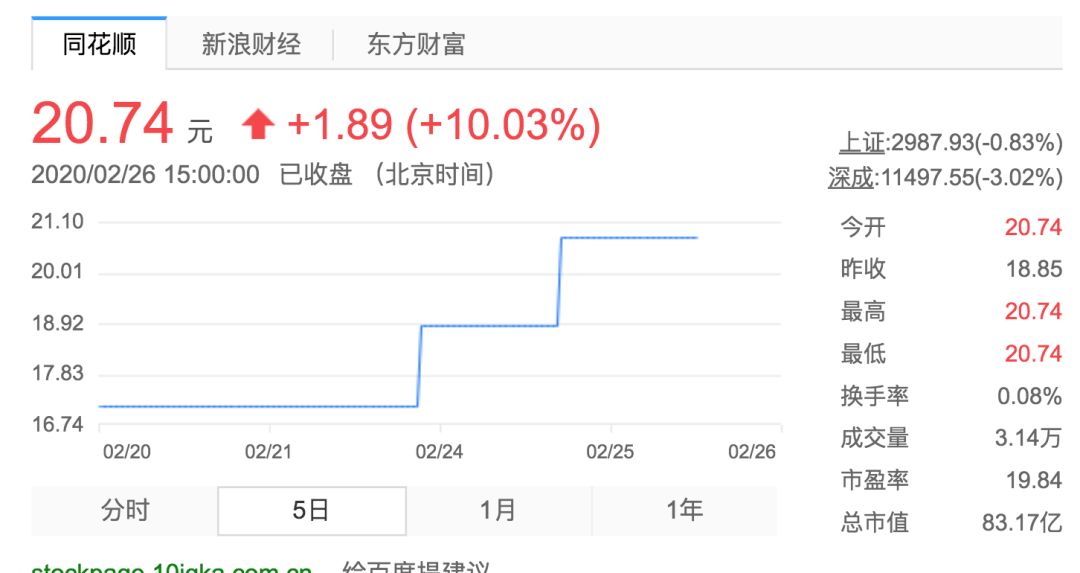 The stock price of Liangpinpu on March 9, 2020, source: flush flush

Following the listing of the three squirrels on the GEM in July 2019, an additional listed company was added to the trillion snack market.

In general terms, the purpose of listing is threefold: to raise more funds to support business development, invest in building competitiveness, achieve capital exit requirements through secondary market liquidity, and increase the visibility of companies and brands, and improve their reputation.

The IPO of Liangpinpu naturally has a driving factor at the capital level.

As early as the end of 2010, Liangpinpu completed its first round of financing-in December 2010, today Capital invested 51 million yuan in Liangpinpu and obtained nearly 30% of the shares. Liangpinpu also became the earliest company to “capitalize” the three squirrels and three herb companies.

It’s worth noting thatAt that time, Liangpinpu had already run a single-point model in the regional market centered on Hubei, and had a certain basis for expansion. It had also been systematically standardized in management. The first round of investors in Liangpinpu, Capital Today, also has a relatively concentrated and focused action on the snack track. Some of the judgments and ideas behind it are worth studying and thinking. You can refer to the “2019年值得关注的中国食品消费品投资机构 An analysis of this in FoodPlus · Annual List “(a good product shop is also the second IPO that Capital has harvested in the snack market segment within six months after three squirrels today).

After receiving today’s capital investment, Liangpinpu began to plan for listing. In 2014, Liangpinpu set up 8 BVI companies to build a red-chip structure and attempted to go public in Hong Kong. However, it stopped halfway and demolished the red-chip structure. Then in 2017, Gaofeng Capital purchased old shares and subscribed for new shares , Injected capital into Liangpinpu twice, with a total investment of more than 800 million yuan.

On June 29, 2018, Liangpinpu announced its IPO prospectus (report draft). The company intends to publicly issue no more than 41 million shares and raise 777 million yuan. However, until November 28, 2019, Liangpin The shop won the IPO issue meeting. 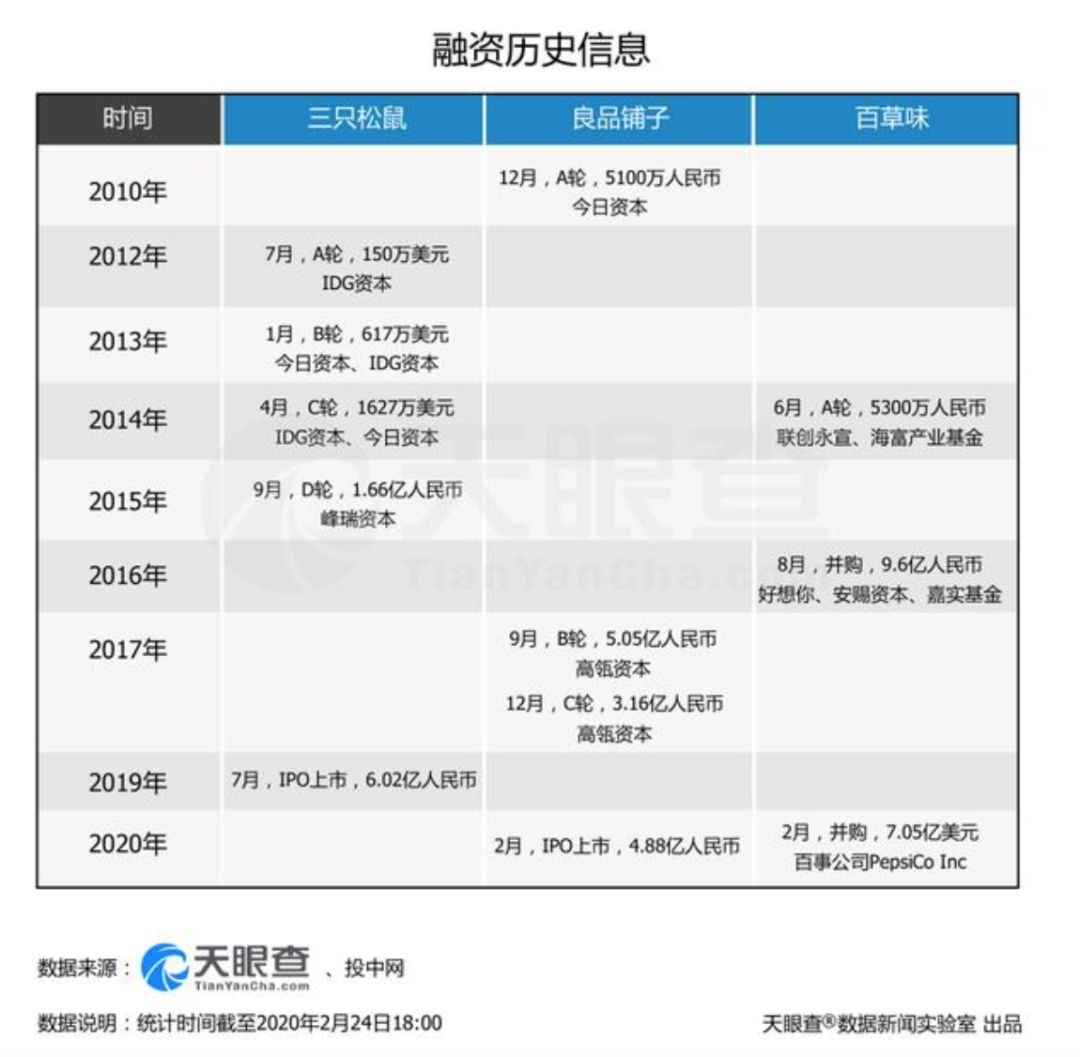 Lipinshop has finally successfully landed on A shares, plus its positive feedback in the secondary market in the past two days,It is hoped that its investment institutions, Capital Today and Gao Capital, will bring rich return expectations. According to the prospectus of Liangpinpu, except for the actual controllers Yang Hongchun, Yang Yinfen, Zhang Guoqiang, and Pan Jiiring, the capital is the second largest shareholder (33.75% of the shares), and Gao Yan is the third largest shareholder (the percentage of shares) 13%).

In addition to the exit and return demands of internal institutional shareholders, some developments and changes in the macro level of the secondary market in recent years have also affected the IPO of Liangpinpu.

It is particularly noteworthy that the three squirrels have also brought some positive benefits to the good store in a successful IPO.

Previously, we have “ review three Squirrel successfully passed the A-share listing last year. To what extent did the meeting affect the investment judgment logic of food companies? “article, combed and analyzed the historical development, business model, and path selection of the three squirrels, and also pointed out directly-three squirrels as a brand that started on the Taobao / Tmall e-commerce platform, in the past Relying on platform dividends and better product penetration angles in recent years, it has experienced high-speed business development, and has also contrasted with the previous traditional large-scale food and consumer goods companies. The results and problems of this new business path are threefold. After a squirrel’s IPO, it will directly affect the value logic judgment of the primary and secondary markets for food and consumer goods companies and the entire consumer industry.

Thanks to the good valuation given to the three squirrels by the secondary market, judging from the stock price rise after the listing of Liangpinpu, the secondary market is also giving a good valuation to Liangpinpu. It can increase the possibility of good financing channels for good products in the future, so that it can open the company’s financing channels when there is a need for high-speed expansion.

The IP this timeO raised more than 400 million yuan. For the good-quality shop, it can supplement operating cash flow to support business development and expansion. In fact, there is a very realistic consideration-based on the existing development basis of the good-shop, competition in the Chinese snack market China establishes its own core advantages to achieve long-term development and ultimately win the market.

Second, what kind of snack company is Liangpinpu and what position does it have in China’s snack market?

1. It has both online e-commerce genes and offline retail genes, so that Liangpinpu has different competitiveness from other snack food companies.

Whether for the average consumer or some media and market research practitioners, they often compare the good-quality shop with the three brands of three squirrels and herbs, and they are known as the “BAT” in the snack industry. True, there are some analogies between these brands:

1. They are comprehensive snack food brands. The products cover almost all the sub-categories of the snack industry with many SKUs.

2. The foundry model is adopted in the supply chain;

3. The efficiency of supply chain management is high, and the speed of new products is relatively fast. Correspondingly, it has also been “criticized” for a long time in the past. The independent research and development ability is poor. Follow-up strategy, the proportion of R & D investment in the overall cost is low;

4. Its development has enjoyed the rapid growth of the online snack market represented by Taobao & Tmall. At present, these online brands are very important markets for these brands;

5. Due to the above-mentioned factors such as product homogeneity and reliance on online, etc., it is currently facing fierce competition. Correspondingly, problems such as high proportion of marketing investment in expenses and low profit levels have occurred.

However, from a business perspective, there are still some obvious differences between Liangpinpu and the three squirrels and herbs. Compared with the latter, almost all of its revenue comes from online channels. Liangpinshop started off-line. Build your own offline retail store system through self-employment + franchise. Correspondingly, until now, the main revenue of the good product shop has come from offline. 50%, but still no more than offline). Therefore, it is obviously inappropriate to say that Liangpinpu is an “Internet Zero Food Brand”.

I have experience in opening stores and offline retail business, and have systematic experience. It is a core of good food shop, compared with three squirrels and herbs, which has only begun to explore offline food brands in recent years Comparative Advantage.

Of course, compared to Lai Yifen and other traditional snack chain retail brands that have always focused on offline, Liangpinpu has better captured and grasped the opportunities of the online snack market and established Tmall and JD. Online sales systems and capabilities.

As a result, from the perspective of the entire Chinese snack market, the online and offline brands and retail IPOs have a certain gene and experience. The IPO has brought some future development to this company established in 2006. Fundamentals of Imagination:

a. Liangpinpu launched a large-scale e-commerce business around 2012. This company that started from offline retail has almost completed the e-commerce business structure and landing, including the establishment of an independent e-commerce business from the corporate structure. The merchant operating company develops an independent system for online transactions. The product specifically opens a separate SKU for online and builds a specialized e-commerce warehouse. In the e-commerce operation centered on the Taobao Tmall system, it has also boldly followed up the investment and established a set of own e-commerce operation promotion ideas. Correspondingly, the Liangpinpu enjoyed the rapid growth of online snack consumption as well as the three squirrels and herbs. The revenue has increased considerably.

b. From the very beginning, Liangpinshop has been doing solid offline retail business. On the one hand, it has accumulated a large number of stores, including a large number of directly-operated stores and franchise stores, forming the core offline channel network of the brand. It has also formed a systematic and direct-to-consumer business foundation. On the other hand, in the ten years of chain retail business, Liangpinpu has accumulated single-store operation and standardized expansion of stores, as well as a network-based systematic operation foundation. And ability.

c. After years of operation, Liangpinpu has accumulated a certain value at the brand level, especially through a series of launch and promotion strategies in recent years (including the “high-end” upgrade of the brand in 2019) and relying on more than 2,000 offline The continued exposure of stores has a certain basis for brand recognition.

Analyzed above are the basic competitive aspects of good shops. Looking at the entire Chinese snack market, snack companies can be divided into several types from the perspective of business models:

1. Traditional CPG companies, including multinational companies such as Nestlé, Mars, MDL, Pepsi and domestic listed companies such as Q & A and QinQin, the business model is mainly focused on product research and development, production, marketing and brand building. , Traditionally does not directly face consumer sales, but builds a sales network through dealers and terminal channels;

2. Zero food brands for offline retail, represented by Yifen in listed companies, mainly through the establishment of offline chain stores to build a sales network, and face the sellers for sales;

3. E-commerce zero food brand, represented by three squirrels and Baicao, are based on online channels such as e-commerce platforms. Sellers have both B2C (open flagship stores directly to consumers) and B2B models ( Supply to JD.com and Tmall supermarkets).

Of course, the above division is a traditional business model division. From the current perspective of the development of many brands and companies, these online-offline and brand-retail attributes are gradually dissolving. However, from the perspective of market development stage and competition pattern, we can still disassemble and analyze the business of Liangpinpu from this perspective and put it in such a framework for analysis.

In this regard, we have selected the business data of the H1 2019 of Liangpinpu, three squirrels, miss you, Qiaqia, Yifen, and Yanjinpu (currently, the data for the whole year of 2019 are still available for most companies). The exact audited version has not been released) and has been organized as follows:

It can be seen from the revenue data that, in terms of the overall volume of the business, Liangpinpu is one of the top local zero-food brands-currently the revenue is only second to three squirrels. Moreover, Liangpinpu is also the most balanced online-offline business development among these brands.

On the other hand, if the e-commerce business and offline chain retail business of Liangpinpu are separated, as two companies, you can see that Liangpinpu’s offline retail perspective is also very basic-business Mass