Should you consider going to the island and living with your own residents and friends?

Healing warmth and slow pace is the charm of “Motion”, it allows people to slowly enjoy “life” in a completely peaceful virtual world, try to create and discover surprises, this is indeed the case The essence of a game, but it can be so hot in a market like ours, only these may not be enough.

A host game was popular on Weibo, which is probably what we did not dare to imagine before.

On March 20th, the Nintendo game “Let’s gather!” Nine days after the release of “Animal Friends” (hereinafter referred to as “Motion Sen”), the stock of “Turnip” in the game was listed on Weibo. The Weibo is full of netizens who share their prices of Turtish, players all Lamenting “This is too great.” 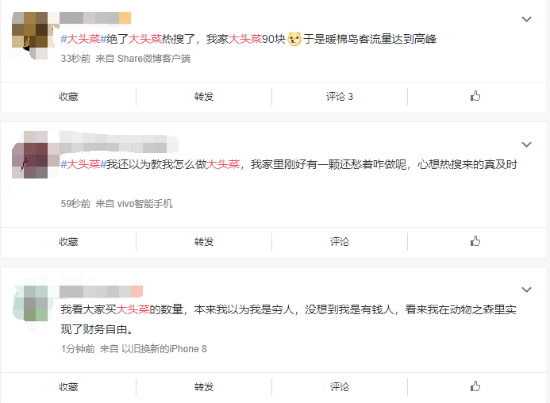 We have a consensus that console games are unpopular in our market, even if it is a hot “Fitness Adventure” some time ago, its popularity is far less than imagined. Baidu index even Related search terms are not included, but “Dong Sen” is completely different, except for hot search, friendsThe circle also has a very high “appearance rate”, “the only one in the world that I have not played with Sen” has become a common netizen ridicule.

Many media have analyzed that warmth and slow rhythm are the charm of “Motion”. It allows people to slowly enjoy “life” in a completely peaceful virtual world, try to create and discover surprises This is indeed the essence of this game, but it is not enough to achieve such popularity in a market like ours.

“I added a lot of games to NS, and the first time I saw so many people playing the same game online, it turned out to be me alone.” Re sister said to Du Yujun.

Re sister ’s previous loneliness is a true portrayal of the popularity of console games in China, and this time “Motion” became hot, she also enjoyed the fun of playing games with her friends. Every day when I go to the island, I will ask my friend the price of Kohlrabi. After each new dress for the island, I can invite my friends to go to the island for a visit, take my friends to visit the island for a circle, and then send them to the airport to watch them leave. In “Motion” Re girl really lives seriously.

In the observation of Yujun, more people in this “Dynamic” craze are still gamers who have experienced gaming experience. Not many people try to play games for “Dynamic” from scratch. After all, a 2,000-plus NS host, 400-plus games, plus a monthly membership fee of 25 yuan, is indeed the primary threshold on the island, which is difficult to drive those who usually enjoy entertainment by brushing to watch variety shows , To live another life on the island.

So why do all those who play mobile games this time come to experience “Motion”? One of the reasons may be on the word social.

There are three social spaces in “Motion” itself. One is the socialization between players and residents of the island. Chatting and interacting with the islanders every day and discovering their hobbies and interests is one of the funs when you The surprise when I found that the gifts for the residents were really placed in their homes was no lower than that of catching a rare fish.

The second is player-to-player socialization, just like Re sister and her friends, players who have added friends can go to the island, or post gifts, every discovery and creation you can share directly with Friends, and with the exploration of players, some people on the island have also played small games such as “robbing chairs” and hide and seek. Even if only a few people are holding the insect trap and patting their heads, they can bring the most simple happiness to the players.

The third is the socialization of players and non-players. “Motion” itself has a “photographing” setting. The pictures taken by players can be posted directly to their social media accounts. Although there is currently no channel to domestic social media, they still can’t block players. The enthusiasm we share, every picture you see on the Internet is a joy that players want to share, which is also a necessary condition for this game to continue to attract more people to the island.

Although the experience is slow