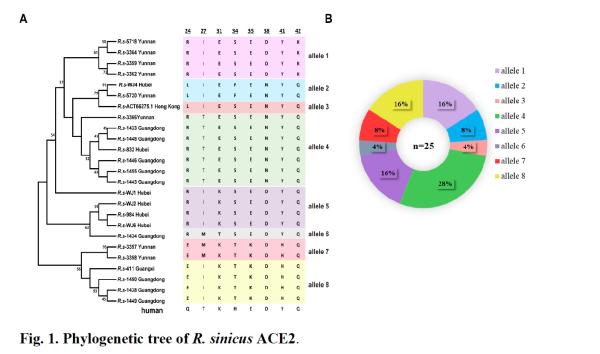 Different sensitivities of A. chinensis ACE2 variants to SARS-associated coronavirus infection To evaluate different ACE2 Whether the molecule will affect the entry of SARS virus and bat SARS-associated coronavirus, the researchers transiently expressed ACE2 variants of Heliotrope chinensis in HeLa cells, and tested SARS virus pseudotypes carrying different spike proteins or bat SARS The entry efficiency of coronaviruses. 4 strains of bat SARS-associated coronavirus can be divided into 4 genotypes according to S1 sequence. Simply put, compared with the spike protein of SARS virus, the RBD of SARS-associated virus RsWIV1 has a high degree of amino acid identity with SARS virus; RsWIV16 is a close relative of SARS virus, showing high amino acid similarity in NTD and RBD; Rs4231 on NTD It has high amino acid similarity with SARS virus; RsSHC014 is different from SARS virus in NTD and RBD regions. Similar to previous results: all four bat SARS-associated coronavirus strains with the same genomic background but different spike proteins can be similarized using human ACE2 Horizontal replication. However, there are some differences in how they use ACE2. All test viruses can effectively use alleles 1, 2, 4, and 5 to enter. RsWIV1 and RsWIV16 with the same RBDThen allele 6 from Guangdong (sample ID 1434) cannot be used. Rs4231 and RsSHC014 with the same RBD cannot use allele 7 (sample ID 3357) and allele 8 (sample ID 1438) from Yunnan and Guangdong, respectively. The SARS virus BJ01 has a high similarity to the RBD of WIV1 and WIV16, and can use the same bat ACE2 allele as Rs4231 and RsSHC014 in pseudotype infection experiments. These results indicate that virus entry into cells is affected by the spiked RBD and ACE2 variants. 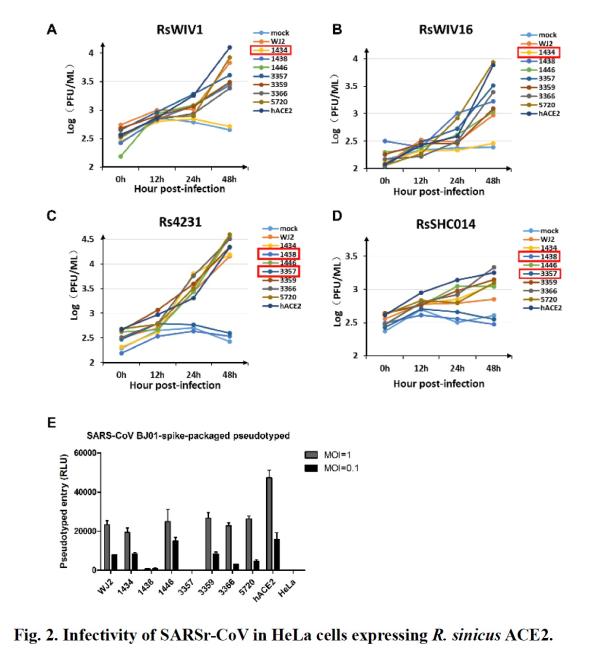 Mutations of ACE2 residues in bats will affect their binding affinity to SARS-associated coronavirus RBD For further understanding of SARS virus and SARS-associated coronavirus pairs The ability to use ACE2 was different. The researchers expressed the RBD of the coronaviruses BJ01, RsWIV1, RsWIV1, RsSHC014, and ACE2 of three Chinese rhinoceros bats, which were allele 6 (sample 1434) and allele 7 (sample 3357) And allele 2 (sample 5720). Subsequently, the researchers tested the affinity between them. The positive control is the RBD of SARS virus BJ01 and human ACE2, and the negative control is the RBD of SARS virus RsWIV1 and human DPP4. Real-time analysis shows that, based on the equilibrium dissociation constant KD, different RBDs have different binding affinity to ACE2. Consistent with the results of the virus infection experiment, it was found that 1434ACE2 (allele 6) binds to RsSHC014 and BJ01, but not to the RBD of RsWIV1; the study also found 3357ACE2 (etc. Allele 7) binds to RsWIV1, but not to RBD of RsSHC014 and BJ01; 5720ACE2 (etc.Allele 2) was found to bind all tested RBDs. All RBDs tested have high binding affinity to human or bat ACE2. However, compared with the RBD of the two bat SARS-associated coronaviruses, it has a low binding affinity for ACE2. These results show that the binding affinity of spiked RBD and ACE2 affects the virus ’s ability to infect. 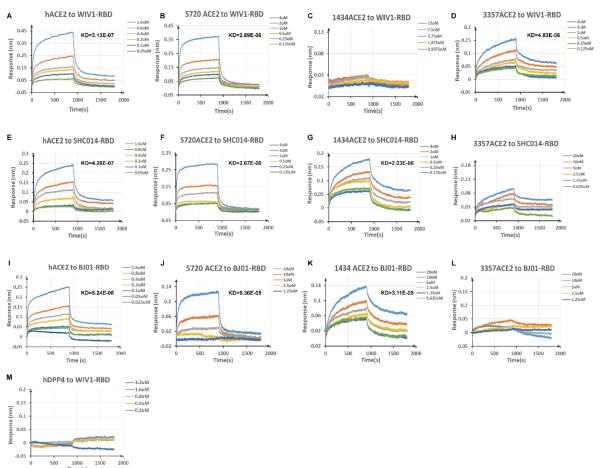 Structural model of the interaction between the SARS-associated coronavirus RBDs and the Chinese rhinoceros ACE2s The size of the spike proteins of four bat SARS-associated coronaviruses The same amino acid homology with SARS-CoV exceeds 90%, indicating that these proteins have 228 similar structures. In this study, they constructed a structurally complex model of the bat SARS-associated coronavirus RsSHC014 RBD using ACE2 3357 (allele 7), and constructed a bat SARS using ACE2 1434 (allele 6) A complex model of the coronavirus RsWIV1 RBD. This is consistent with the results of the SARS-CoV RBD binding affinity experiment with human ACE2. Compared with the contact residues at the interface of SARS-CoV RBD and human ACE2, two viral binding hot spots (hotspot hotspot Lys31 and Lys353 consisting of Glu35 and Asp38 salt bridge respectively) on or near ACE2 can be observed. As mentioned earlier, these two hot spots are hidden in a hydrophobic environment. They provide a large amount of energy for the virus-receptor binding interaction and fill the key gaps in the hydrophobic superposition 238 interaction at the binding interface. Compared with human ACE2, the two main residual changes of A. chinensis ACE2-3357 are E35K and Y41H. E35K and RsSHC014 RBThe breaking of the salt bridge of K31 and Arg479 in D may affect the binding affinity between them. The histidine at position 41 may weaken the support of the K353-d38 salt bridge, because histidine is less hydrophobic than tyrosine, resulting in a reduced binding affinity for BJ01 RBD. Therefore, the binding affinity of BJ01 and RsSHC014 RBD to ACE2-3357 is low. Threonine was found at position 31 in ACE2-1434, which is different from the position of human ACE2, which is lysine. Although the change of K31T prevents it from forming a salt bridge with Glu35, Tyr442 in RBD c of BJ01 can form a hydrogen bond with it. However, the serine at 442 in RsWIV1 RBD does not have this function. In addition, RsSHC014 contains an arginine at 479, Thr31 cannot form a salt bridge with Glu35, so that Glu35 can form a salt bridge with Arg479, but RBD residue in RsWIV1 Asn479 may cause it to lose this ability. Therefore, BJ01 and RsSHC014 RBD can bind ACE2 -1434, but RsWIV1RBD cannot bind ACE2 -1434. All ACE2 in this study contained an asparagine at position 82, while human ACE2 is methionine at this position. The change in M82N introduces an unfavorable hydrophilic residue, weakening the hydrophobic network around hot spot 31. In addition, Asn82 introduced a glycosylation site, as in rat ACE2, which prevented it from effectively supporting SARS-CoV infection; glycan at position 82 of ACE2 may cause spatial interference with viral RBD binding. Therefore, M82N may have a significant effect on the interaction of SARS-CoV and SARS-associated coronavirus RBD with Chinese ceratoides ACE2s. As mentioned earlier, residue 487 of RBD interacts with hot spot 353 on ACE2. RsWIV1 RBD contains Asn487, the polar side chain of Asn487 may adversely interact with the aliphatic part of Lys353 residue in ACE2, affecting the hot spot interaction between K353 and D38. In addition, RsSHC014 RBD contains an alanine at position 487; the small side chain of Ala 487 does not support hot spot 353structure. Therefore, the binding affinity of RsWIV1 and RsSHC014 RBD to human ACE2 is lower than that of BJ01, but the binding affinity to human ACE2 is higher than ACE2, which is highly consistent with the results of virus infection and binding experiments. 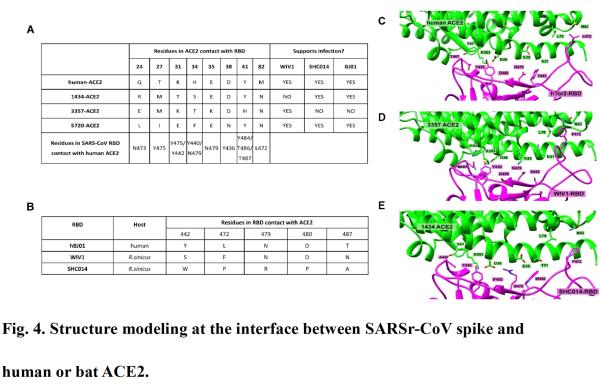 The SARSr-CoV spike gene co-evolves with ACE2 of Chinese rhinoceros through positive selection To test the spike protein and SARS virus spike protein The selection pressure of the ACE2 gene of Chinese chrysanthemum bats, they used the coding ml program of the PAML software package to analyze the ratio of non-synonymous mutations to synonymous mutations (dN / dS ratio) of a single codon. By analyzing the complete gene sequence encoding the SARS-associated coronavirus spike protein, and aligning the gene sequences of 9 SARS-associated coronavirus spike proteins from the Chinese scorpion bat samples. The study found that the model allows codons to evolve under positive selection (M2a and M8). In model M8 (initial seed value ω (dN / dS) = 1.6, codon frequency = F3X4), 20 codons (p> 0.95) are positively selected at a rate of dN / dS> 1, according to the crystal structure, 298 17 of the codons were found in the RBD region, facing the receptor ACE2. In addition, the five codons (442, 472, 479, 480, and 487) appearing in SARS-CoV spikes have been previously determined to have a significant effect on the binding affinity of human ACE2. Next, they analyzed the ACE2 gene of Chinese chrysanthemum chinensis by comparing the 25 ACE2 gene sequences obtained from this study and downloaded from GenBank. They found that in model M8, 12 codons (2.3%, p> 0.95) were selected positively at a rate of dN / dS> 1, of which 8 codons (31, 24, 27, 34, 35, 38,41, 42) Corresponding to the residues of human ACE2, these codons are directly involved in the contact of human SARS virus spike proteins. They also analyzed the ACE2 gene of R. affinis and reported that the gene occasionally binds SARS-associated coronavirus. Using the 23 ACE2 gene sequence alignments obtained from this study, it was found that the ACE2 in the entire coding region is more conservative among different individuals in the entire coding region than the ACE2 in China, and no obvious Select the site in the positive direction (data not shown). In addition, by querying the single nucleotide polymorphism (SNP) database, they found that the SNPs in the human ACE2 gene were randomly generated throughout the coding region. Although two SNPs with non-synonymous mutations (T27A and E35K) were found in human ACE2, they all show rare frequencies (frequency of 0.00001 and 0.00002, respectively) in the global population. These results indicate that a positive selection occurs at the interface of the SARS-associated coronavirus spike protein of the bat and ACE2. 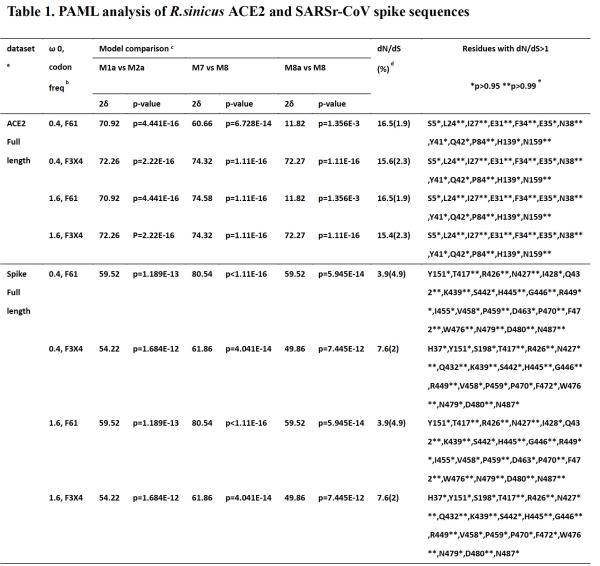