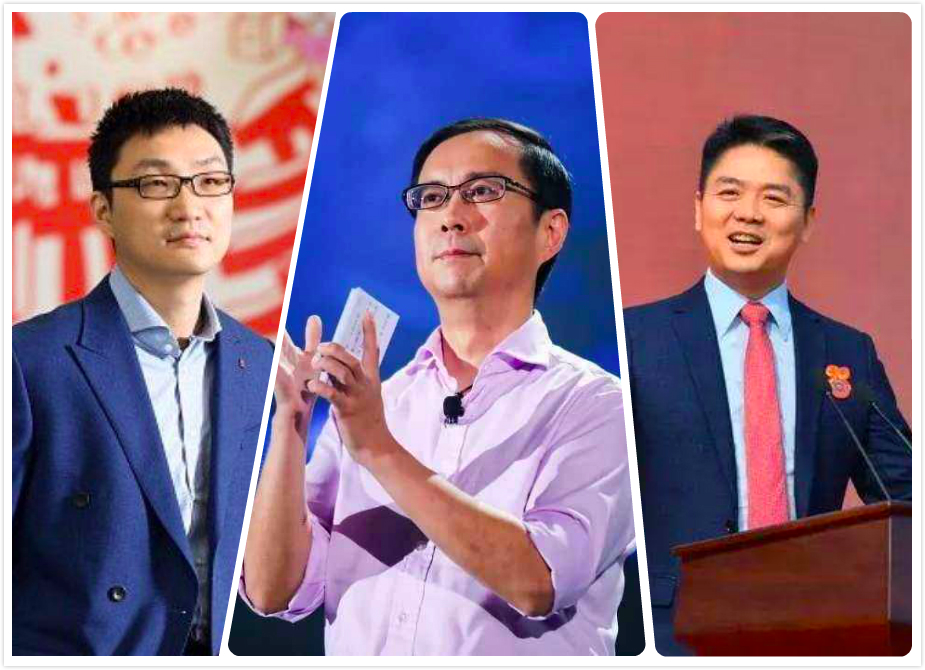 On May 22, before the US stock market, Pinduoduo and Alibaba successively released financial reports. At this point, the three major domestic e-commerce giants (Alibaba, JD.com and Pinduoduo) have all handed in the first quarter report cards affected by the epidemic.

JD.com ’s performance in the first quarter, which released its earnings earlier, has been discussed many times: revenue exceeded expectations, active users increased significantly, and the logistics system became a key support for JD.com in a special period. Correspondingly, because the number of Alibaba and Pinduoduo is very different from that of JD.com, it has been affected by the epidemic situation and what kind of response it has received has attracted considerable market attention.

For Pinduoduo, market expectations are more conservative. Analysts expect Pinduoduo ’s Q1 revenue to be 4.969 billion yuan, up 9.3% year-on-year, or a new low growth rate; adjusted net loss of 2.670 billion yuan, an increase of 93.6 over the same period last year %.

From the final results, Alibaba and Pinduoduo exceeded market expectations to varying degrees.

The key financial indicators of Alibaba are as follows:

The key financial indicators of Pinduoduo are as follows:

Due to different development stages and their own advantages, the three e-commerce giants have adopted different coping strategies in the face of the impact of the epidemic. The financial performance in the first quarter is a clear reflection of the differences between the three.

The three giants have their own ways

In terms of revenue, JD.com still ranks first among the three, which is related to JD.com ’s business model is mainly self-operated e-commerce, which mainly earns direct sales revenue of goods, while Taobao, Tmall, Pinduoduo earns more from platform advertising fees and service fees, so JD.com’s revenue tends to be higher than Alibaba, but its profits are not as good as the latter.

According to the situation in this quarter, JD.com has distanced itself from Alibaba in terms of revenue, and Pinduoduo, as an e-commerce upstart, has much room for revenue growth compared to the first two. 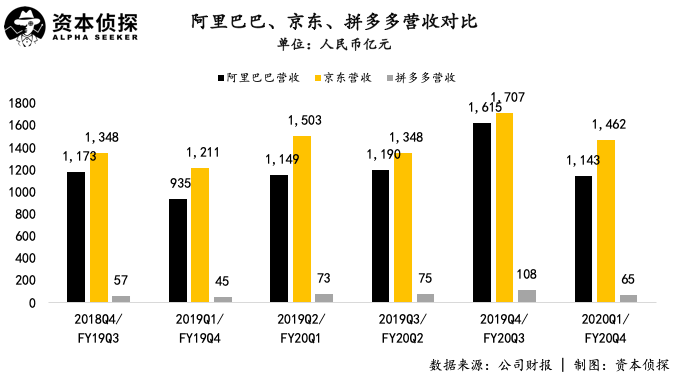 In terms of revenue growth, the three have slowed down to varying degrees, with Pinduoduo and Alibaba being more obvious. Under the impact of the epidemic, although Pinduoduo’s revenue exceeded expectations, the growth has dropped significantly compared with the previous level of nearly doubling, and Alibaba has experienced a similar situation.

Compared with JD.com and Pinduoduo, Alibaba’s income structure is more complicated. Since the competition between the three is mainly concentrated in domestic retail business, the Chinese retail business in Alibaba’s core business is a key detail indicator for comparison. The financial report shows that the business’ revenue in the fourth fiscal quarter of 2020 was 70.905 billion yuan, accounting for 62% of the total revenue, an increase of 21% year-on-year, slightly lower than the total revenue growth rate of 22.3%.

Among the various revenues of Alibaba, the growth of Alibaba Cloud and the innovation business segment are more prominent.

Alibaba Cloud achieved revenue of RMB 12.217 billion this quarter,A year-on-year increase of 58% and the proportion of total revenue increased from 8% to 11%, which is one of the key forces driving growth; the innovative business segment composed of Gaode Maps, AliOS, Dingding, Tmall Genie, etc. realized revenue 2.288 billion yuan, an increase of 90% year-on-year, but the proportion of total revenue has not changed much, still 2%. 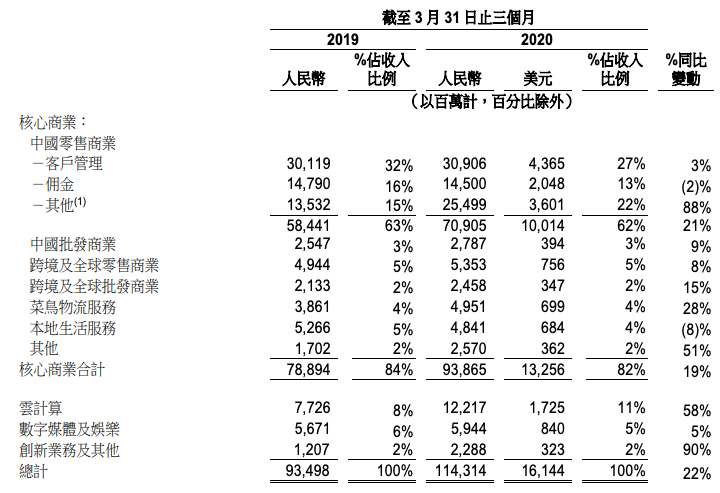 It is worth noting that Pinduoduo ’s commission revenue accounted for 11% of the previous income, and the proportion of this income rose to 16% in the first quarter.

That is to say, 44% of the total revenue growth is largely driven by the increase in commission income.

In terms of active users, Alibaba, JD.com and Pinduoduo’s annual active users are 726 million (China’s retail market), 387 million and 628 million. While Pinduoduo achieved 600 million active users, the distance to Alibaba has narrowed to less than 100 million.

In terms of annual active user growth, the only one showing a slowdown in growth is Alibaba. Due to its outstanding logistics performance during the epidemic, JD.com’s return of old users accelerated, sleepy users were awakened, and new users’ active access and active shopping also increased. Its annual active users increased by 24.6% year-on-year, hitting the highest level in recent quarters; Pinduoduo slightly improved on the basis of maintaining the original high-speed growth. 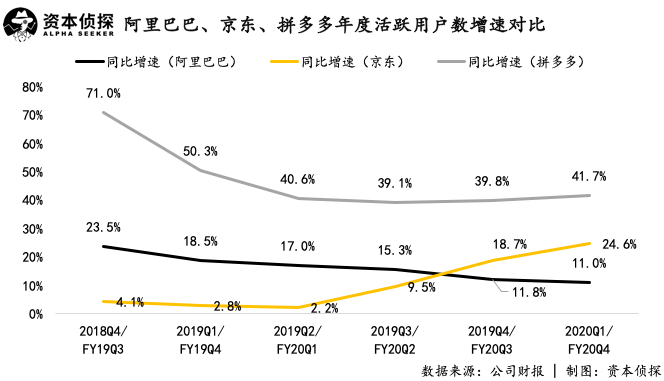 For the breakthrough in the number of active buyers, Huang Zheng, chairman and CEO of Pinduoduo, said that the monthly / annual buyer index of Pinduoduo increased from 65.4% in the first quarter of 19 77.6%, which means that users prefer Pinduoduo’s products, and Pinduoduo also has a stronger ability to meet the needs of users’ diversity.

It is also worth noting that the per capita consumption level of Pinduoduo users for the 12 months ended March 31 this year increased from 1257.3 yuan in the same period last year to 1842.4 yuan. In other words, users spend more money on Pinduoduo.

The number of active users continues to grow and the per capita consumption level rises. Pinduoduo has shown huge growth potential.

However, Pinduoduo ’s revenue and user growth is not without cost. The financial report shows that its sales and marketing expenses in the first quarter reached 7.297 billion yuan, and the rate was as high as 111.6%. The financial report shows that the reason for the increase in this fee is that Pinduoduo’s investment in advertising, promotion and subsidies continues to increase.

In other words, Pinduoduo ’s growth in the first quarter was largely a result of burning money. At the same time, the general and administrative expenses and R & D expenses of Pinduoduo also increased by 43.3% and 120.8% year-on-year. The operating expense ratio was as high as 139.2%, so that the operating loss reached 4.397 billion yuan.

It seems to be responding to the “burning money” behavior of Pinduoduo. On the earnings call, Alibaba ’s chief executiveFinance Officer Wu Wei said that Alibaba does not agree with the practice of burning money to seek transaction volume growth, “we will not do it.” Wu Wei also said that Alibaba hopes that any investment will be sustainable and efficient.

According to the financial report data, as a “big brother”, compared with more fights, JD.com and Alibaba have shown much restraint in their investment. 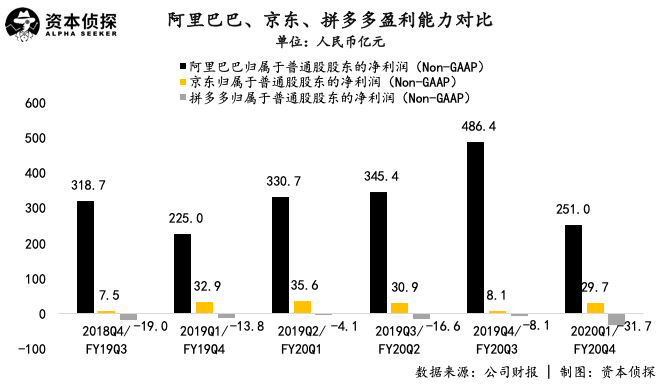 Although Alibaba is relatively restrained in terms of expenses, the net interest rate is still seriously affected by the epidemic. Under non-GAAP, its net profit attributable to ordinary shareholders in the first quarter was 22%, compared with the previous The quarterly decline was obvious; JD.com ’s net profit margin was 2%, compared with 2.7% and 0.5% in the same period last year and the previous quarter, respectively; Pinduoduo ’s loss rate expanded to -48.5%. 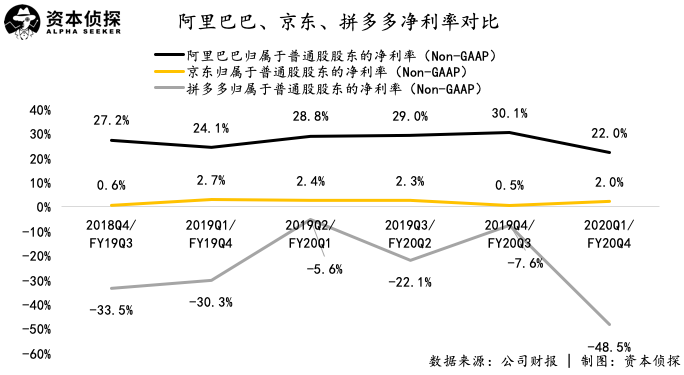 It can be seen that compared with the restraint of industry veteran giants Alibaba and JD.com, they are still in the growth period and fight more, and continue to focus on “grabbing the ground” under the impact of the epidemic. This has led to an increase in revenue and active users, but the loss range is also staggering.

It is worth noting that the official Weibo of Pinduoduo announced after the financial report that its 10 billion subsidy project will continue to increase. In other words, Pinduoduo still insists on the strategy of burning money for growth.

According to various indicators, JD.com has benefited from the “heavy asset” model of self-built logistics, and it performed the most stable in the first quarter affected by the epidemic. However, the two opponents are also continuing to make efforts in the logistics field:


Another important significance of Pinduoduo’s joint effort with Gome is that the former officially cuts into the category of 3C home appliances with higher unit prices. Although Gome is not as good as JD.com and Tmall in terms of market share in the home appliance market, Gome may challenge JD.com and Tmall by virtue of the traffic advantage of “600 million people are using more and more.”

Pinduoduo tried to cut into the 3C home appliance category to continue its strategy of “rural surrounding cities”, while Alibaba and JD.com are also invading Pinduoduo’s basic market.

That is, the short soldiers meetIt is happening, and the smell of gunpowder will become stronger.

As the epidemic is brought under control, the business activities of all walks of life are gradually recovering. After coming out of the shadow of the epidemic, Alibaba, JD.com and Pinduoduo also ushered in a new stage of competition.

That is to say, after the merchants regain their vitality, how the live broadcast will drive Taobao Tmall’s revenue growth will be a highlight of Alibaba’s next quarter performance. JD.com and Pinduoduo are also exploring how to catch the express train.

For JD.com, after the epidemic has eased, how to continuously amplify its logistics advantages, seek growth, and maintain profitability is a long-term test; while Pinduoduo still has to face the old problems of increasing user loyalty and customer unit price.

Fengshui turns, the dominant position will not always exist, and pressure may also cause a rebound. Alibaba, JD.com and Pinduoduo will have a long-standing three-pronged position in the e-commerce field. This special first quarter will magnify the differences between the three major platforms, but the competition has shown that you are among me, and you are among you. On the way, the fight between the three major e-commerce platforms will only become more intense.