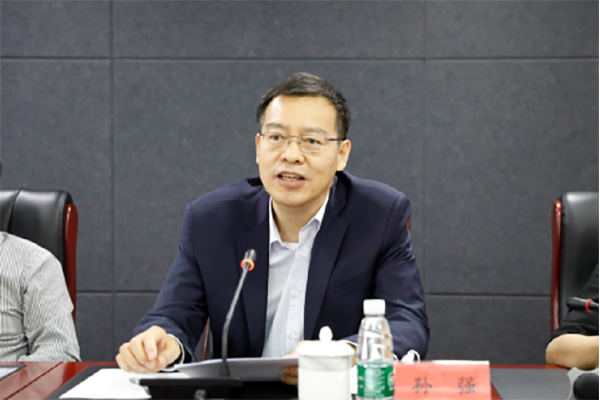 Sun Qiang On May 22, Everbright Sun Life ’s official website released a message It is said that on the morning of May 20, Everbright Yongming Life held a cadre meeting, and China Everbright Group Party Committee member and deputy general manager Fu Wanjun attended and delivered a speech. Dong Tiefeng, head of the organization department of the Everbright Group Party Committee, announced that Sun Qiang will take over as secretary of the Everbright Sun Life Insurance Party Committee and nominate the chairman. This appointment still needs to be reviewed and approved by the company’s board of directors, shareholders’ general meeting and the approval of the China Banking and Insurance Regulatory Commission. At the cadre meeting, Fu Wanjun represented Everbright Group at the meeting on behalf of the former Everbright Sun Life Insurance Party Committee Secretary and Chairman Zhang Yukuan The achievements and contributions made by the Group are fully affirmed. Due to age reasons, the group respects Zhang Yukuan’s personal wishes, appoints him as the leader of the newly established Everbright Group Insurance New Business Preparation Group, and hires him as a senior expert of Everbright Sun Life Insurance to continue to promote the strategic layout of the Group’s insurance business. Sun Qiang, who took over as chairman this time, was previously vice president of China Everbright Bank. On May 19, Everbright Bank issued an announcement saying that Vice President Sun Qiang submitted his resignation to the board of directors of the bank on May 19, 2020 due to work adjustments and resigned from the position of Deputy President. From the resume, Sun Qiang is 51 years old and graduated from Peking University with a major in Probability and Statistics. He later obtained a master degree in money and banking from the School of Finance and Economics of Renmin University of China. He worked in the Investigation and Statistics Department of the Head Office of the People’s Bank of China, the General Office, the State Administration of Foreign Exchange, and the People’s Bank of Shantou City, Guangdong Province. Joined China Everbright Bank in 1997 and served successively as the Vice President of Zhuhai Sub-branch and the President of Shantou Sub-branch of Guangzhou Branch, Assistant General Manager of the Supervision and Protection Department of the Head Office, Assistant General Manager and Deputy General Manager of the Business Department of the Company, and Deputy General Manager of the Interbank Organization Department , General manager, general manager of the company’s business department, assistant to the president, deputy president and other duties. As a colleague who worked with Everbright for a long time, Zhang Yukuan commented on Sun Qiang’s “excellent basic quality, loyal character, rich experience, and broad vision”. He is a rare financial expert and leader. Zhang Yukuan said that he believes that the company will achieve greater results in the future under the leadership of the team led by Sun Qiang. Everbright Sun Life was established in April 2002, with its registered place in Tianjin and registered capital of 5.4 billion yuan. In terms of shareholders, Everbright Group holds 50% of the shares, Canada Sun Life Insurance Company holds 24.99% of the shares, China Ordnance Industry Group Corporation’s Zhongping Investment Management Co., Ltd. holds 12.505% of the shares, and Anshan Iron and Steel Group Company under the Anshan Iron and Steel Group Company holds 12.505 %. In the first quarter of 2020, Everbright Sun Life Life Insurance business revenue was 5.206 billion yuan, and net profit was 80.571 million yuan. Everbright Sun Life said that despite the impact of the new crown epidemic, Everbright Sun Life’s business indicators and investment indicators have significantly outperformed the market and performed well. In the first quarter, the company’s premiums on the scale of new orders paid increased by 39% year-on-year; renewal premiums increased by 9% year-on-year, and the value of new business increased by 6% year-on-year. The three core indicators all hit record highs. In the unfavorable environment in which the CSI 300 fell by 9.4% over the same period, equity investment has always maintained a positive return.