How fierce can the industry of “shoveling” be?

This is the fourth in a series of “what do you buy”, review of the first three:

On February 16, 2020, Gao Lian set a new increase in Gloria at a price of 124 yuan per share, with a total investment of 2.3 billion yuan. After the fixed increase, Gao Lu held more than 5% of the shares and became Kai Laiying’s second largest shareholder. On May 7, Gao Lian transferred another 5 million shares of General Manager Cao Xiaochun of Tiger Pharma, spending 370 million yuan.

Klein Ying and Tiger Pharmaceuticals are the leading players in the CDMO and clinical CRO fields in China, respectively. Gao Xuan’s heavy investment has made CXO an unprecedented focus. 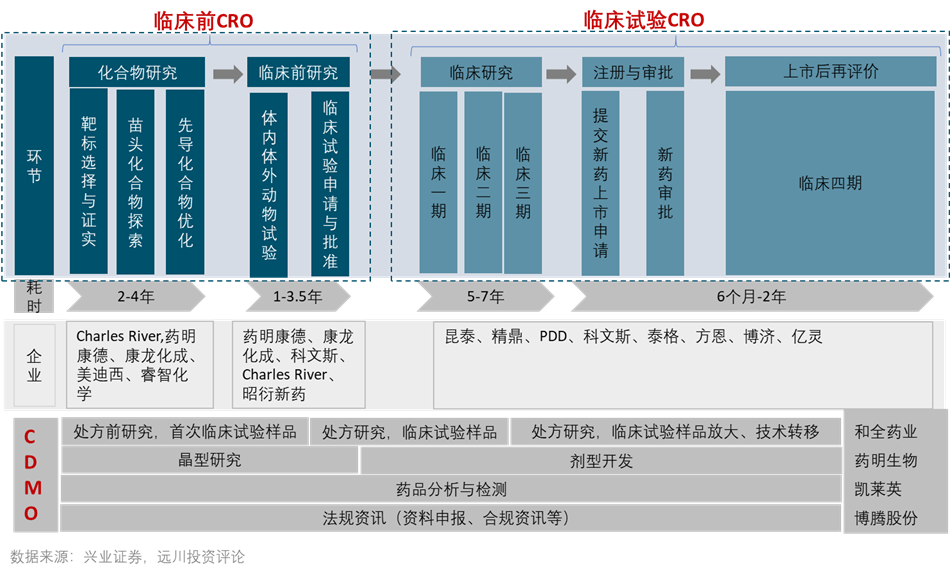 Three months after the acquisition of Gloria, the stock price of Gloria increased by 30%, and the CSI 300 Pharmaceutical Index rose 13% this year. Gao Lu’s investment float has exceeded 1.5 billion yuan.

CXO is one of the earliest sectors invested by Gao Lu in the medical and healthcare field, with an investment of over 10 billion yuan. As early as 2015, Gao Leng invested in CRO leading WuXi PharmaTech in US stocks and participated in the privatization of WuXi PharmaTech, A shares and Hong Kong stocks all the way. After 2018, Gao Lian has successively invested in Tiger Pharma, Fangda Holdings and Gloria. 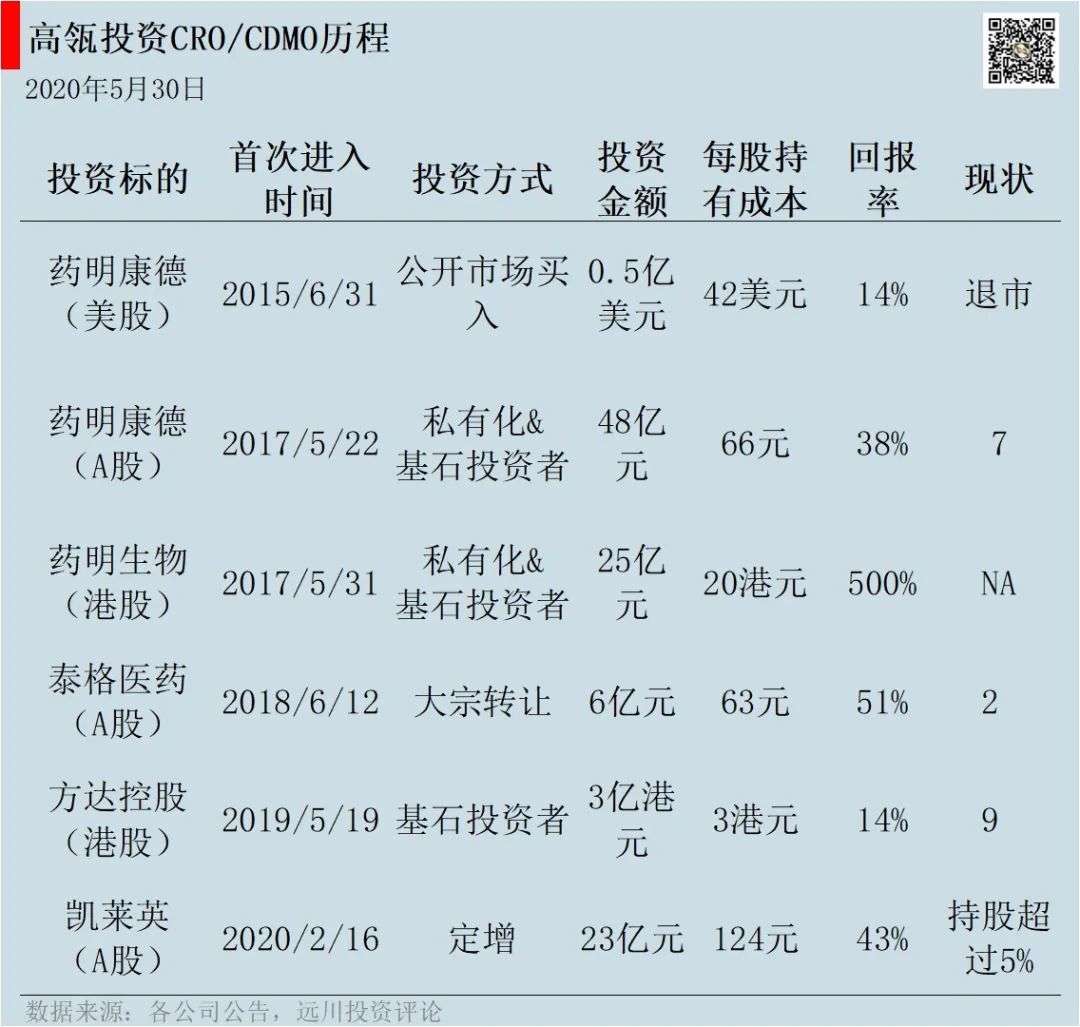 Why did Gao Xuan re-position CXO?

Before 2015, the most important investment logic of China’s CRO industry was the transfer of the global pharmaceutical industry chain. The core of the industrial chain transfer is to reduce costs, which is in line with the logic generated by the CXO industry.

Since the 1950s, as simple diseases were conquered, the field of medical research and development has become increasingly difficult. The development of new drugs shows a trend against Moore’s Law. The number of new drugs that can be marketed for every US$1 billion is doubled every 10 years, and the return on investment continues to decline. For every $1 billion invested, only one new drug can be listed. In order to reduce R&D costs, in the 1970s, multinational pharmaceutical companies began to outsource R&D tasks, and the rise of CRO giants represented by Quintiles.

Compared to Quintiles, WuXi PharmaTech’s biggest advantage lies in the Chinese engineer bonus. In the 1980s, “21st century is the century of biology” with the introduction of the Human Genome Project, biological talents began to attract attention. In 2002, the Ministry of Education issued a document authorizing universities to establish a national training base for life science and technology talents. CRO is a labor-intensive industry, and the biggest cost lies in the salary of personnel, while the salary of Chinese engineers is less than half of that in the United States. 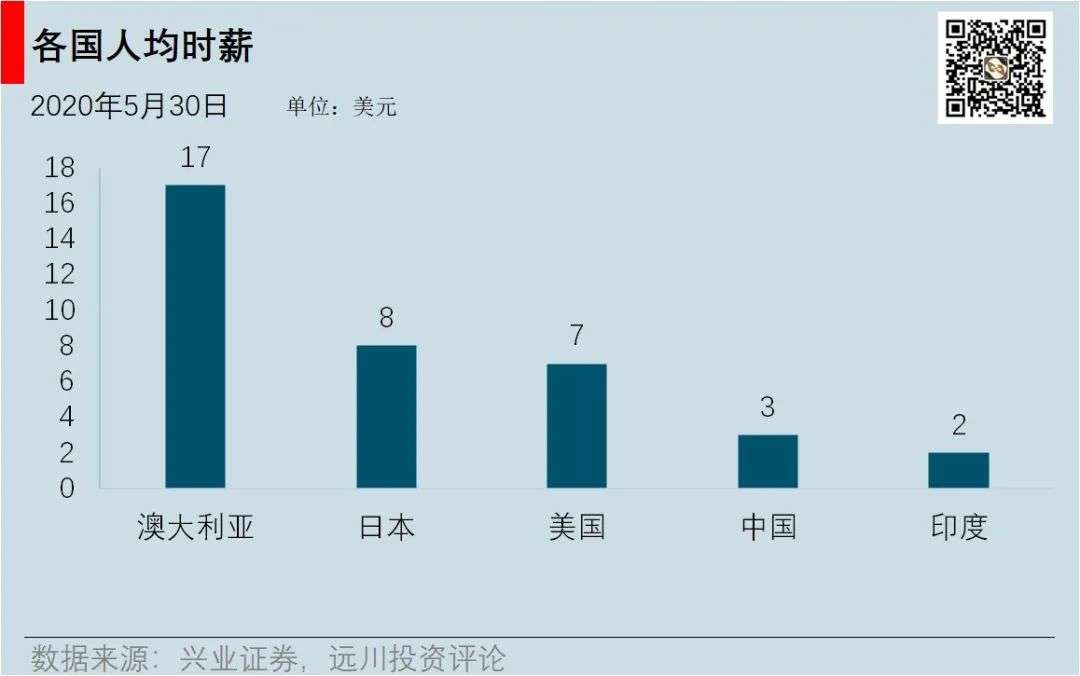 Chinese CRO companies mainly serve multinational pharmaceutical companies. In 2012, more than 16% of WuXi PharmaTech’s revenue came from Merck. Over-reliance on large customers was even considered by investors as a major risk factor for the company. In 2013, the development of new drugs by multinational pharmaceutical companies fell into a bottleneck period, and the number of new drugs on the market dropped sharply, inhibiting the growth of CXO.

In 2012, there were 39 in the United StatesThe new drug was approved and reached its peak since 1997. But in 2013, it dropped to 27, and only 32 were applied for approval, including only 2 biological drugs. Although WuXi PharmaTech’s revenue growth rate still exceeded 10% during this period, it was still far below the growth rate of more than 20% after 2015.

Before 2015, Gao Lian did not invest in CXO, mainly because the domestic downstream innovative pharmaceutical industry has not developed, and CXO companies are still outsourcing multinational pharmaceutical companies. The first to enter is still foreign capital. In 2005, STO Capital invested in WuXi PharmaTech. In 2008, DCM and Junlian Capital invested in Kanglong Chemical. At that time, shortly after Gao Lian was established, Zhang Lei had just voted for Tencent with the $27 million given by tutor David Swenson.

Part.2 The tide is coming: the era of new drug research and development begins

The R&D of multinational pharmaceutical companies entered a procyclical cycle, which brought the growth of CXO industry. But the more important driver of China’s CXO industry is the reform of the drug review that began in 2015. This reform aims to standardize the generic drug industry, encourage the development of innovative drugs, and form a double benefit for CXO on the supply and demand sides.

(Readers who don’t know innovative drugs, I suggest you read the previous article in “What Do You Buy?”

Higher approval efficiency means shorter return on investment. The tide of innovative medicines in China started, a large number of innovative medicine enterprises were established in 2015, and capital flowed insanely. In 2015, 130 new pharmaceutical companies were added in China, reaching the highest level in the past years. The financing amount of the Chinese pharmaceutical industry has doubled every year for three consecutive years from 2015 to 2017, reaching 62.3 billion yuan in 2017, with a total investment of over 100 billion yuan in three years.

However, there is a problem in front of small and medium-sized innovative pharmaceutical companies. There are many links in the development of a drug. It is impossible for capital to spend money to support small and medium-sized innovative pharmaceutical companies to build large-scale R&D platforms by themselves. At this point in time, Gao Lu invested in CRO’s leading WuXi PharmaTech.

Part.3 Seize the opportunity: rush to prepare for Foxconn in the pharmaceutical industry

For small and medium-sized innovative pharmaceutical companies, the complexity and high cost of pharmaceutical R&D is difficult to surpassthreshold. There are many links in the development of a drug, and SMEs are unable to build a large-scale R&D platform. Whenever there is one less link, you need to look for outsourcing. When the successful research and development of the drug reaches the stage of commercialization, it is too slow to make jars by yourself, and you also need to find CDMO. This has brought huge incremental demand to the CXO industry.

Under the bursting market, Gao Lu entered the field of CRO.

In 2015, Gao Leng bought nearly US$50 million of WuXi PharmaTech shares in US stocks. It was originally a simple investment, but WuXi PharmaTech’s textbook-like capital operation gave Gao Lu a chance to make a fortune.

The US stock market is a mature market. CRO giants like Charles River have never been valued more than 40 times. WuXi PharmaTech has been hovering around 35 times before delisting. The panic sentiment by short bears constantly doing air stocks has also depressed the valuation of China stocks. Lou Jing, chairman of Sansheng Pharmaceutical, once said that if your sales have increased 5 times and profits have increased 5 times in 5 years, but the stock price remains the same, will you withdraw from the market?

On the one hand, the Chinese stocks are constantly being shorted, and on the other side is the big bull market that rose from 2,000 to 5,000 points. WuXi PharmaTech was delisted that year. WuXi PharmaTech’s capital operation was the most successful, with four IPOs three years after delisting, and the market value has tripled. Gao Leng seized this opportunity and participated in the privatization of WuXi PharmaTech.

Two years after its listing, WuXi PharmaTech’s share price has nearly tripled, Gao Yuan has cashed out about 1.6 billion yuan, and the remaining stocks have a floating profit of more than 2.8 billion yuan. WuXi Biotech’s stock price has also doubled. Suppose that Gao Leng still holds WuXi Biological and has not sold one share, and the book floating profit exceeds 10 billion yuan. But according to Gao Leng’s normal operation, the probability has already been reduced like WuXi PharmaTech.

Before 2018, Gao Lun’s investment in the CXO field was only WuXi PharmaTech. Following WuXi PharmaTech from US stocks to Hong Kong stocks to A shares, he did not miss every opportunity to invest in this CRO giant.

Until 2018, capital market reforms once again stirred up the pharmaceutical market,Gao Leng began to expand from drug discovery CRO to clinical CRO and CDMO.

Part.4 At the cusp of the storm: tens of billions of dollars to take over giants

In April 2018, the Hong Kong Stock Exchange officially announced the “Emerging and Innovative Industry Companies Listing System”, which has been brewing for half a year, allowing biotech companies that are not yet profitable to go public in Hong Kong. The huge loss-making Chinese innovative pharmaceutical companies have difficulty listing A-shares on the main board, the liquidity of the New Third Board is poor, and listing of US stocks is costly. Hong Kong stocks have become the best exit channel.

In 2018, Cinda Bio, Jun Shi Bio, and WuXi PharmaTech were listed on Hong Kong stocks one after another. In November, the general secretary proposed the establishment of a science and technology board and a pilot registration system at the China International Import Expo. The establishment of the science and technology board in the second year became an important exit channel for pharmaceutical companies. The high valuation of the Science and Technology Board has also made the innovative drug companies surging, and the first batch of listed companies have been fired to 200 times PE.

The wave of innovative medicines in 2015 gave capital an opportunity to invest in innovative medicines. The reform of the Hong Kong Stock Exchange in 2018 and the establishment of the Science and Technology Board in 2019 pointed to a way of making money for capital. In 2018, more than 60 billion yuan was still invested in pharmaceutical companies, and more than 58 billion yuan in 2019, but the amount of investment is getting less and less, and innovative pharmaceutical companies have entered a polarization. 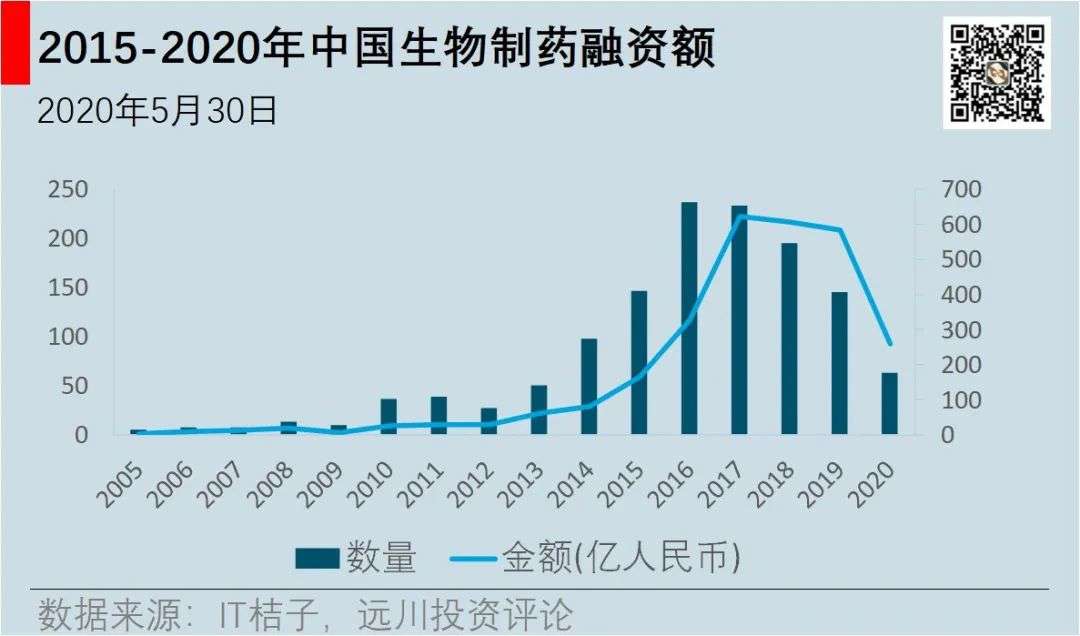 A large number of innovative drug projects have been eliminated, and the remaining projects have received increasing amounts of financing. In 2015, the average financing amount received by pharmaceutical companies was 100 million yuan, 150 million in 2016, 300 million in 2017 and 2018, and 400 million in 2019. The remaining innovative pharmaceutical companies, with the deepening of research and development, not only do drug discovery, but also clinical research and commercialization. Gao Yuan’s investment has also expanded from drug discovery CRO to clinical CRO and CDMO.

The only one missing, CDMO is commercialized.