The total starting price in Hangzhou and Guangzhou exceeds 90 billion

Within one day, the two major cities simultaneously announced the first batch of centralized transfer plans for homes this year, with a total starting price of nearly 150 billion yuan.

In the early morning of April 7, 57 residential plots in Hangzhou were listed collectively, with a total area of ​​3.018 million square meters and a total starting price of 94.37 billion yuan; on the same day, Chongqing issued the announcement of the first batch of residential plots this year, supplying a total of 119 projects. Homesteads, totaling about 11,280 mu, with a total starting price of 54.923 billion yuan. Not long ago, Beijing, Tianjin, Guangzhou, Wuxi, Changsha and other cities have announced the first batch of plans for centralized land supply this year.

According to the new regulations on the “two centralized” supply of residential land (concentrated release announcements, centralized transfer activities), a unified public announcement of residential land bids, auctions and listings throughout the year and implementation of bids, auctions, and listings for sale activities cannot exceed 3 times. 22, including 4 first-tier cities in Beijing, Shanghai, Guangzhou and Shenzhen, and 18 second-tier cities including Nanjing, Suzhou, Hangzhou, Xiamen, Fuzhou, and Chongqing.

It is worth noting that since late February, Tianjin, Zhengzhou, Qingdao and other places have successively issued documents to strictly implement the simultaneous and open transfer of residential land in the “two centralizations”. This also means that the rules of the game in the land market have ushered in a “big reshuffle”, and development companies are not only facing tremendous pressure on funds, but also paying for the risk of land grabbing for “decision-making”. 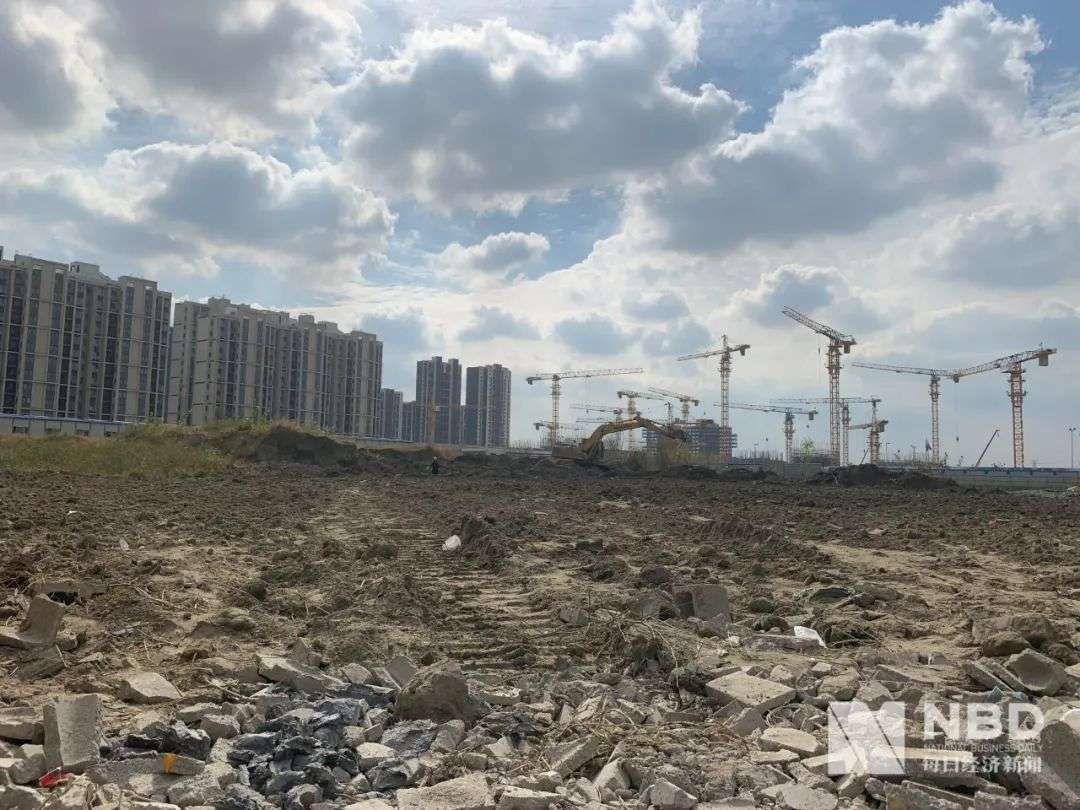 The plot next to a project in Hongqiao, Shanghai. Photo source: Every reporter periterated.

Can the new land supply regulations cool the city?

This is also the highest starting price among cities that have announced the first batch of residential land supply plans this year, which is much higher than Beijing, Tianjin and other cities, and also exceeds the total listed price of 90.1 billion yuan announced in Guangzhou on March 26.

It is worth mentioning that the volume and price of Hangzhou’s property market rose in March. According to the regional data of Keerrui Zhejiang, a total of 483 real estate projects in Hangzhou in March were successfully subscribed. The number of resignations reached 20,034, an increase of 39.5% from the previous month, more than double the number of less than 10,000 units in the same period last year, and it was a record. The monthly trading volume has reached a new high in the past 4 years. The average transaction price reached 29,072 yuan / square meter, also becoming a single-month high in the past year, up 2.5% from the previous month.

As the sales end continues to be hot, the market has great expectations for the new “dual centralized” land supply regulations to disperse market firepower and cool down the local market.

Compared with Hangzhou and Chongqing, Beijing has set more stringent conditions for the first batch of centralized land transfers. A total of 30 land listings were launched on April 1, including 10 in Chaoyang District and 2 in Haidian District. , 2 cases in Fengtai District, 1 case in Shijingshan District. For the 6 projects located in Chaoyang, Haidian, and the sub-center with good location conditions, the transaction method of bidding for the government’s share of the property rights of commercial housing was adopted. At the same time, the housing sales price guidance mechanism was introduced for the first time, which was guided by the previous pre-sale links. In the land transfer link, the sales price guide for each plot of house will be notified during the announcement period that the development company will submit a price commitment for house sale in the land bidding link as a pre-condition for future pre-sales. 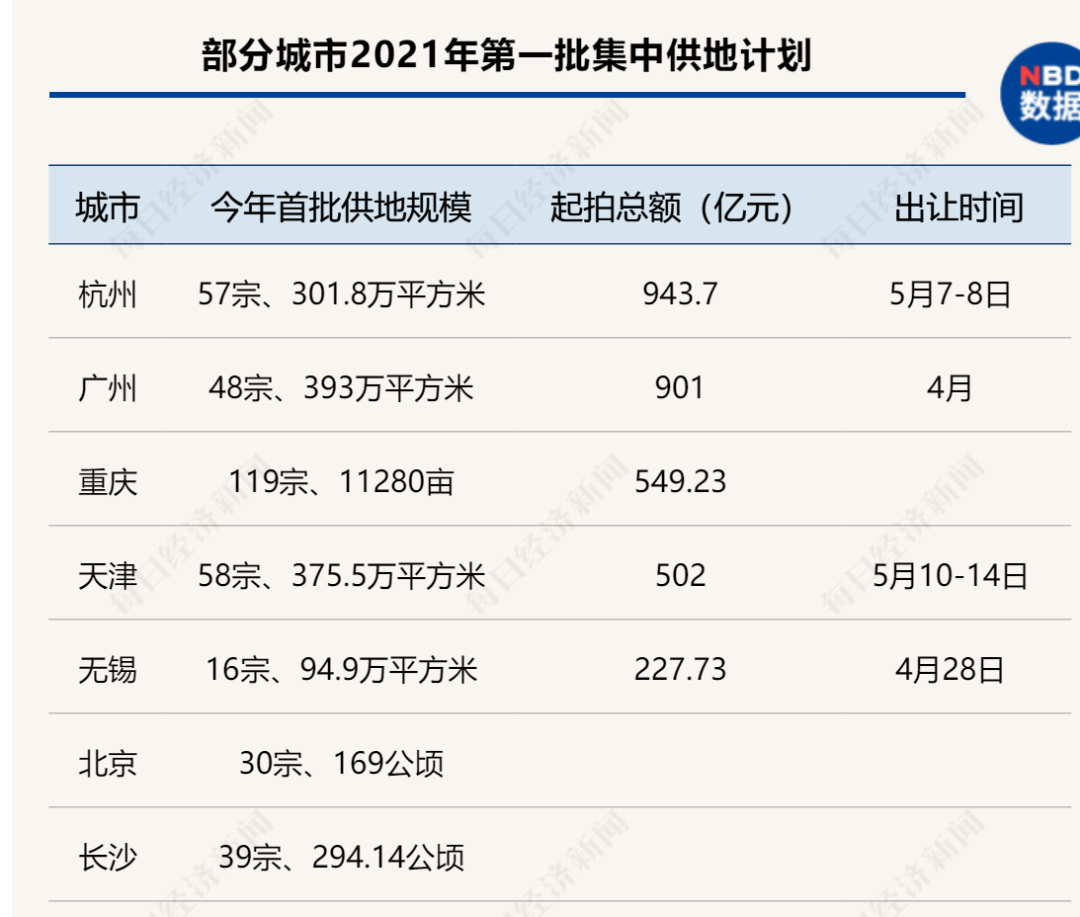 On the one hand, the price of land used as flour continues to rise, and on the other hand, the price of new houses used as bread is restricted. Real estate companies’ expectations for profits have returned from “doubling” to cost and management. Nowadays, 22 hotspot cities have implemented the new “dual centralized” land supply regulations, which may make real estate companies more cautious in the face of huge “trial and error costs”.

Song Hongwei of the Tongce Research Institute analyzed to the reporter of “Daily Economic News” that, “In addition to the financing capacity of centralized land supply, it also tests the real estate companies’ control of urban layout and investment risks. The real estate industry has entered low profits. The development stage also means that the real estate company’s investment decisions are not tolerant of any errors, especially the decision to invest in land acquisition. If there is a mistake in the urban layout and the land parcel is wrong, it will directly affect the net profit of the entire housing company for half a year or even more. Many, serious ones may also lead to a rupture of cash flow.”

Yu Liang, chairman of Vanke’s board of directors, said at the performance meeting, “If the net debt ratio is sometimes lower, it is because Vanke is waiting for opportunities. For example, the problem of centralized land supply this year has great requirements for the company’s financial strength. Resilience. Our 18% net debt ratio may also be just waiting for opportunities for such changes in the market.”

MultipleAccording to industry insiders, the new “dual centralization” of land supply regulations can not only encircle and suppress hotspot areas with “disperse” funds, but also change the pattern of the land market. The land competition among small and medium-sized real estate companies may shift from the hotspot first- and second-tier cities to third- and fourth-tier cities.

But in fact, land prices in third- and fourth-tier cities are currently at a high level. The E-House Research Institute’s “Residential Land Price Report in Hundred Cities” shows that from January to February this year, the price of residential land in 64 third- and fourth-tier cities was 4,128 yuan per square meter, a year-on-year increase of 34.4%, which was significantly greater than that of first- and second-tier cities.

According to historical data, the cumulative year-on-year increase in land prices in third- and fourth-tier cities at the beginning of the year is the highest in the last 36 months. The report also pointed out that, especially under the new “dual centralized” land supply regulations, the uncertainty of land acquisition in some second-tier cities may increase. At this time, real estate companies may accelerate their entry into the part from the perspective of land price cost control and land acquisition opportunities. Focus on third- and fourth-tier cities, thereby pushing up land prices in these cities. From the perspective of the Yangtze River Delta, which is relatively hot across the country, Song Hongwei pointed out to the reporter of “Daily Economic News” that the new “dual centralized” land supply regulations will have a certain impact on the market structure of the Yangtze River Delta. The land market in some county-level cities will Will heat up.

“At present, the centralized land supply policy of the core cities in the Yangtze River Delta has been implemented one after another, and it is about to enter the land supply stage. These cities are bound to usher in a land auction. This will be the main battlefield for leading real estate companies and local real estate companies. The second and third-tier cities in the Yangtze River Delta, the core of the company’s original layout, have also been increasingly regulated due to the warming of the market in the early stage, which directly led to further squeezing of profits. At the same time, the difficulty of acquiring land is also rising, and some real estate companies will begin to move to county-level cities, especially the core County-level cities around the city, so the land market in these areas will continue to rise in the future.” Song Hongwei said.