Editor’s note: This article is from the public micro-channel number “have rice research” (ID: YouFunLab), Author: There are rice omelet.

Q1 has 7 new mobile games worthy of attention. According to the time of their launch, they are “Musical Thinking of Mountains and Seas”, “Happy Thoughts”, “Lamp and Dungeon”, “Heaven and Earth Tribulation: The Second Coming of You City”, and “Douro Continent: Wuhun” “Awakening”, “Forget Chuan Fenghua Record” and “Qin Shi Mingyue World”.

If you categorize and analyze the gameplay, operation, and commercialization characteristics, you can also see some 2021 mobile game methodological changes.

Q1 did not show new products due to the theme and gameplay innovation. It is still one of the core methodology to choose mature themes and gameplay for “micro-innovation”, and continue to consume old IP with new art and mixed gameplay.

In terms of themes, 6 of the 7 new products use the martial arts and national style elements that are more familiar to the Chinese people. Only “The Lantern and the Dungeon” chooses the elements of magic, monsters, and dungeons that are more European and American.

In terms of the type of adaptation, if you count the money-free “Shan Hai Jing”, 4 out of the 7 new products are IP adaptation products. Among them, the youngest IP is the 2008 online article “Douro Continent” and “Qin “Shi Mingyue” was launched in 2007, and “Youcheng Magic Sword Road” was in 2001.

According to Xuanji Technology, “This kind of cooperation is mainly focused on licensing and advice on plot and art.” “Because game vendors know game users better than us, considering commercialization and the like, we don’t Not directly involved in game design.”

In addition, according to the copyright owner of a web-text IP, some game companies are working because of the lack of a solid foundation of new IP content and fan base in the past two years.In screening old IPs for secondary and tertiary development, “most of these cooperations are developing packages of X products within X years. The fixed licensing fee has been reduced but some other share items have been added.”

From the perspective of market response, due to different game quality and operating levels, these 7 new games have a large gap in revenue, downloads, and user enthusiasm.

The theme and gameplay of “Wandering Mountains and Seas”, which was launched in January, are considered interesting. It is currently the new Q1 tour with the most derived content and full-time UP at station B. However, because of the operation of the hip, the game has been available since February There has been a double decline in turnover and downloads. By March, the downloads will reach 100,000.

In terms of evaluation, taptap’s highest and lowest scores are both IP-based games. “Qin Shi Mingyue World” 6.9 and “Douluo Dalu: Wuhun Awakening” 3.5 are all influenced by the original fans.

After the Ohayoo series of great swords and XX special cattle became available, they talked about an operation methodology, which is simply “Go online first, communicate more with players, and adjust quickly while collecting money.”

From the perspective of Q1’s new product operations, this multi-communication and rapid adjustment strategy is not only suitable for small-scale ultra-leisures, but it seems to be universal.

A very intuitive player experience is that there are so many bugs in this wave of new games. 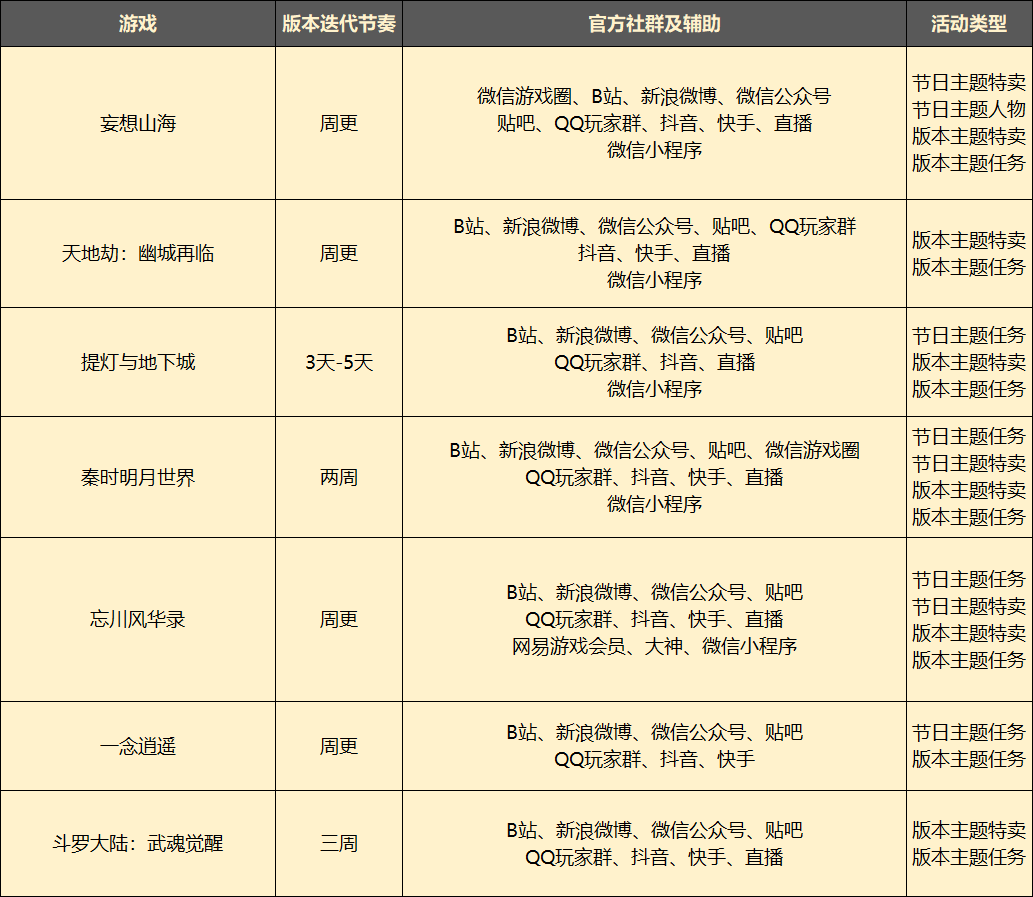 Among the 7 new products of Q1, the more casual version of “Dungeon and Lantern” with the shortest version update cycle, the fastest is 3 days, the slowest is 5 days, the rest except for the large-scale MMO “Qin Shi Mingyue World” and the operation of the fan “Douluo Dalu: Wuhun Awakens” keeps 2-3 weekly updates, all weekly updates.

According to the developer of “Dungeon and Lantern”, this fast-online, fast-updated and iterative pace can help the team instantly obtain and add content that players need, making the product closer to market demand. Of course, the premise is that the product has reached a certain level of maturity, and there should not be too many BUGs that may harm the interests of players after it is launched, otherwise the rapid launch will mean rapid loss.

In this regard, “Wandering Mountains and Seas” and “Qin Shi Mingyue World” are all considered insufficiently prepared, such asIf you are a player of “Wang Xiang Shan Hai”, you should know that in the first two months, “Wang Xiang Shan Hai’s latest BUG” is a popular creative direction for station B and Kuaishou videos.

In addition to the update, we can also see the importance of this wave of new products on out-of-game derivative content, communities, and tools.

The WeChat video account and WeChat game circle can be used for those who are connected with Tencent. NetEase has its own community platform. Some games will also be live broadcast on platforms such as station B, Douyu, Huya, etc. on a weekly and monthly basis, and communicate with players online. 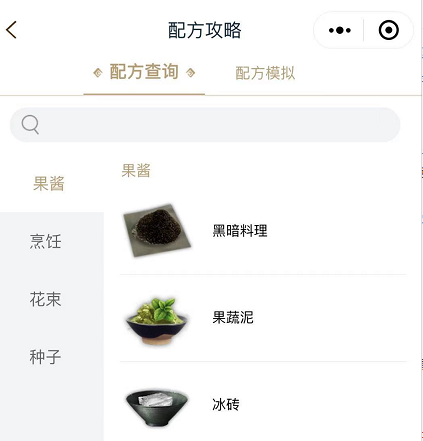 WeChat applet, with strategies, community feedback and some useful tools

In addition, 5 of the 7 products have made special WeChat mini-programs. Players can use the mini-programs to directly communicate with the official and obtain some strategies and practical tools.

3 How to play: Weaken the core, increase the periphery, and the game time is getting longer and longer

NetEase Taoyuan developer Ji Ji said, “Under the circumstance that the total number of gameplays has not changed much, the core gameplay should be weakened with high thresholds and low coolness, and the free space will be filled with some popular ones, suitable for Play with retention and monetization.”

“This adjustment is still to extend the player’s game time when it is as interesting as possible.” The risk of this kind of thinking is that if the time can be extended, but it is not interesting enough, the loss will be more obvious.

Q1 new products also have this meaning in the gameplay.

The rough design of the gameplay of 7 products

Generally speaking, there is no obvious placement or deletion of word game play except for “Yi Nian Xiaoyao” (also because this type of core gameplay is not easy to determine), The other six have the core cut to supplement the operation of the peripheral gameplay.

The most obvious, such as “Wandering Mountains and Seas”, directly cut out the ARPG including attribute restraint, characters, pet occupations, and use unlimited weapons, capture and breeding, and sandbox construction, which seem to be casual, but in fact, the development line is longer. System replacement.

Deputy positions in simulation business are directly linked to values

Strong strategic wargames such as “Heaven and Earth: The Second Coming of the Secluded City”, “The Lantern and the Dungeon”, and “One Thought Happy”, etc., have also weakened the core gameplay such as terrain and job transfer. With unique elements, daily tasks and pet development systems similar to MMORPG have been added.

In addition to drawing card training, we must also decorate the house to enhance our strength

“Qin Shi Mingyue World” and “Douluo Continent: Wuhun Awakening” focus on the characters, and extend the development line and difficulty by refining character development and providing competitions and story adventures.

Theoretically speaking, it is beyond the goal of “2 hours of game time per day” in general RPG mobile games. As for whether it is interesting, I will check the retention later.

In addition, in the goal setting to promote player growth, although most games are still based on numerical values ​​and rankings, such as “Heaven and Earth” has begun to use story unlocking as a goal, and the income level is good, which is an improvement.

In 2021, new products will continue this trend, with more personalized and long-term, small profits but quicker sales ideas. 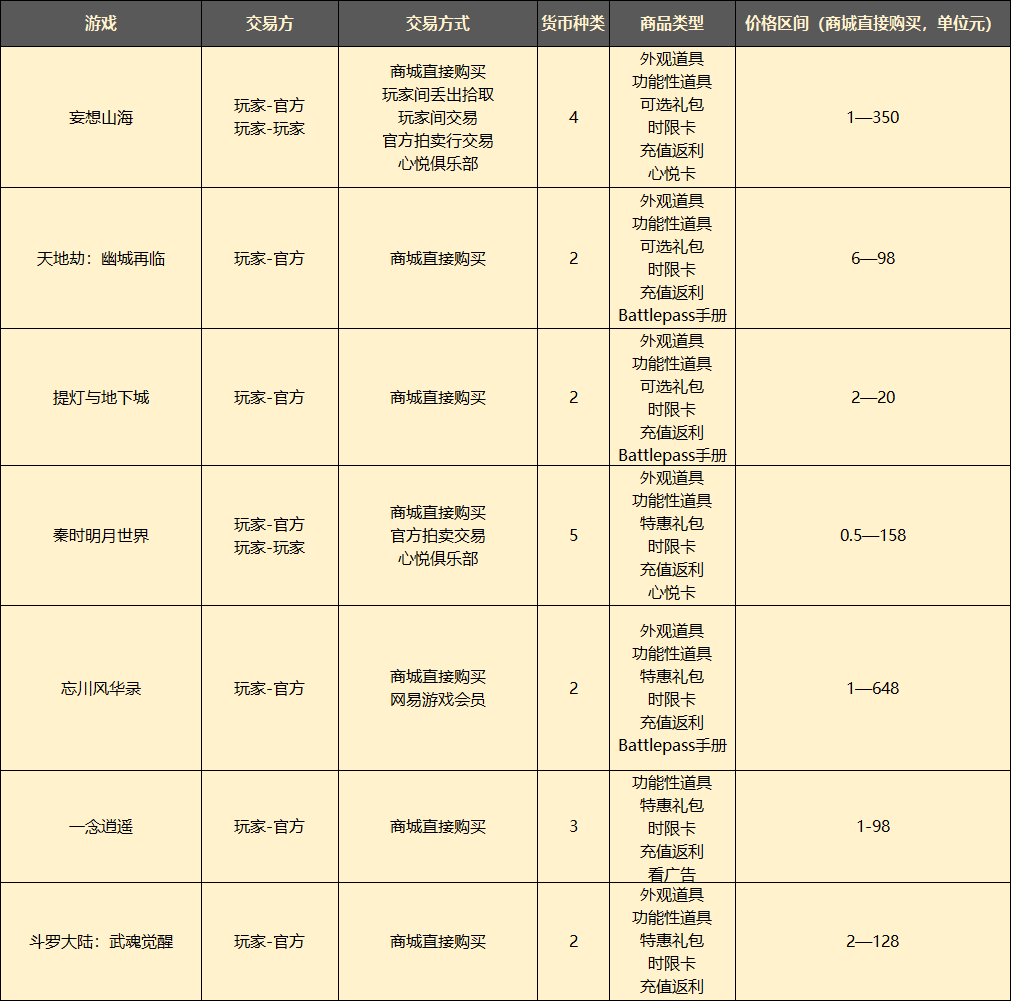 In general, only two of the seven new games allow transactions between players, which are related to game features and team operation capabilities.

In terms of currency types, the four games use universal coins (you can buy them with direct recharge, you can do everything) and ordinary game coins (basic growth consumption). There are 4 and 5 types of main “open” funds, but in fact, universal coins and ordinary coins are divided into circulated and bound.

Interestingly, among them, “Language Mountain and Sea”, “Heaven and Earth: The Second Coming”, “Lantern and Dungeon”, etc. also support optional gift packages, which are also 6 yuan gift packages, and players can choose the content of them. The developers of Netease Thunder said that this design is conducive to promoting player consumption, but may increase the risk of price confusion and hard currency depreciation. 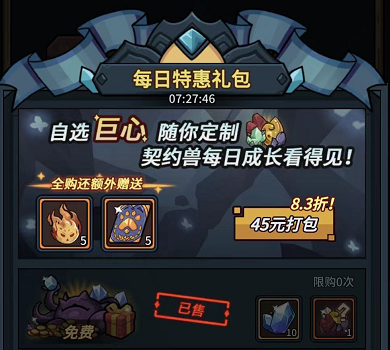 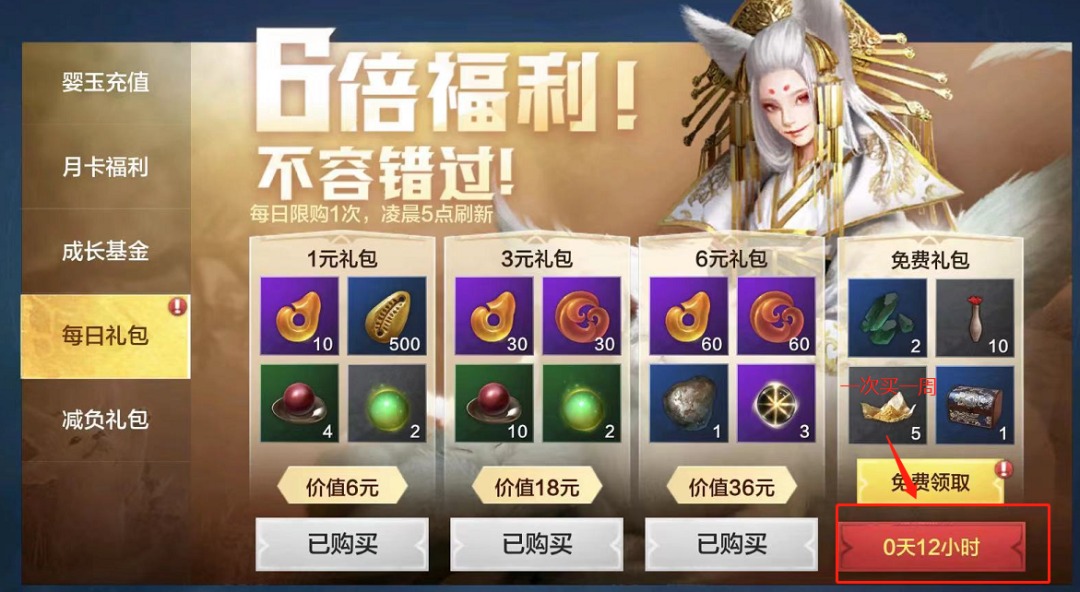 Finally, in terms of the pricing of mall props, the price of a single product is significantly lower than that of the main products in 2020. The highest one is the gift package in “Forget Chuan Fenghualu” is 648 yuan, but it is actually a multi-drawing prop Sum. Of the remaining six models, five of them set the most expensive product within 200 yuan.

According to the views of the developers of “The Lantern and Dungeon” and NetEase Taoyuan, there are currently three core points that promote player consumption:

1. Clarify the value of paid items. That is to let the player clearly know the profit pay ratio, such as a 5 yuan item, if your liver, how long will it take, if you buy it directly, in addition to the time gain, what will be the future game progress gains.

2. Reduce the “guilt” of game consumption. There are two points here. One is to keep the value of the purchase, and you will not regret it after you buy it. The second is to reduce the “waste”, from a single large consumption to multiple and small consumption.

3. Calculate the balance and develop a consumption habit. Similar to the barbershop membership card, there is always a balance, and the balance is always not enough to buy new services. It is a pity to leave it, and you have to recharge it if you want to spend it.

In general, there are new mobile games that can be played in Q1 of 2021.

The plot of “Heaven and Earth: The Second Coming of the Secluded City” is a bit hip, but it is a beautiful and strategic war chess. “Qin Shi Mingyue World” is similar to a certain dream river and a certain water cold, but the original work is well restored , Fans are fairly satisfied. “Forget Chuan Fenghua Lu” is too heavy and too similar to “Onmyoji”, but the world view and character setting are interesting.

These products are worth playing in between “Project Dyson Ball” and before “Strange Hunting: Rise”.

Finally, someone might ask, why didn’t you say that the expectations of “Life in Komori” are flying high?

For me as a player, it may be because of disappointment.

In the words of the developer, it is “healing and leisure. This kind of content that allows people to temporarily escape from reality and relax is actually much more difficult to do than numerical and refreshing content.”

“In addition, it should be noted that there is nothing wrong with the hot spots of game marketing, but it is best not to make a brand image that is particularly obvious in terms of benchmarking.

If users are not guided to the expectations like “Dongsen” or “Assassin’s Creed”, “Xiaomori Life” is actually not that bad, and “The Return of the Great Sage” can be accepted for a few dozen dollars. “