Even if Weilai and Ideal have entered the top ten of the monthly sales list of the Association, they are currently in the bottom three and still not very prominent. However, it should be noted that in this list, the price of Weilai ES6 and Ideal ONE is higher than the previous models. Relatively speaking, Weilai’s ideal is more difficult, so this result is also worthy of praise.

In addition, in this list, apart from Tesla’s rolling existence, the difference between multiple car companies is not too big, which also means that the domestic new energy vehicle market The competition is still very fierce, the ranking situation may also undergo new changes in the second half of the year, and the rankings of Weilai and Ideal may also grow further.

In fact, the strong performance of these two companies is not only reflected in July and one month, but in the whole year, the two cars are also very competitive. 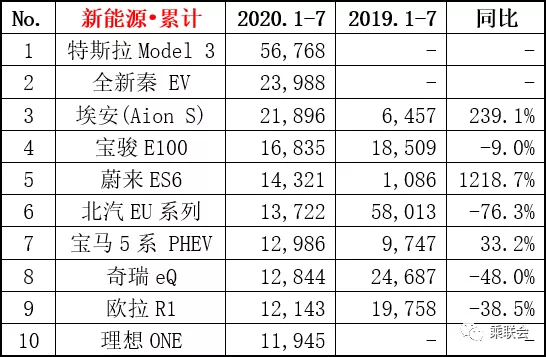 From January to July, Weilai ES6’s sales volume has entered the top five, and its performance is very impressive, and Ideal ONE also firmly held the tenth place, which has never happened last year.

However, although Weilai and Ideal have made sales progress, Tesla currently has an absolute advantage. The combined sales of Weilai ES6 and Ideal ONE are only half of Tesla Model 3. Tesla’s advantage is evident.

From this point of view, the current stage of the new car company’s head player pattern has been fixed, the next stage of fighting will also be carried out in these companies.