The era of the explosion of new “stars” and new entertainment.

Many parents will show disdain when they hear their children turn on Xbox or Playstation game consoles. But Rachel Hofstetter’s mother is different. Since Rachel was a child, her mother has encouraged her to play video games. It now appears that this is a wise decision.

Rachel loves video games so much that she works for a game station while still in school. At the beginning, she posted photos of some new game releases on Instagram, and soon gained a lot of followers.

Later, her fans asked her to broadcast live on the Twitch platform. She had no idea what she was doing at the time, but at that time, almost no one was familiar with the format of live broadcasting.

At that time, Amazon had just bought Twitch, and no one could have imagined that only a few years later, game broadcasts would become popular all over the world.

In 2015, the 23-year-old Rachel officially resigned from the game station and began to do full-time live broadcasting. Her fan team has gradually grown, and now she is broadcasting live on Youtube under the screen name “Valkyrae” and has 3 million subscribers.

Valkyrare said: “I think everything has never changed. My fans support me as much as before, but there are more people.” 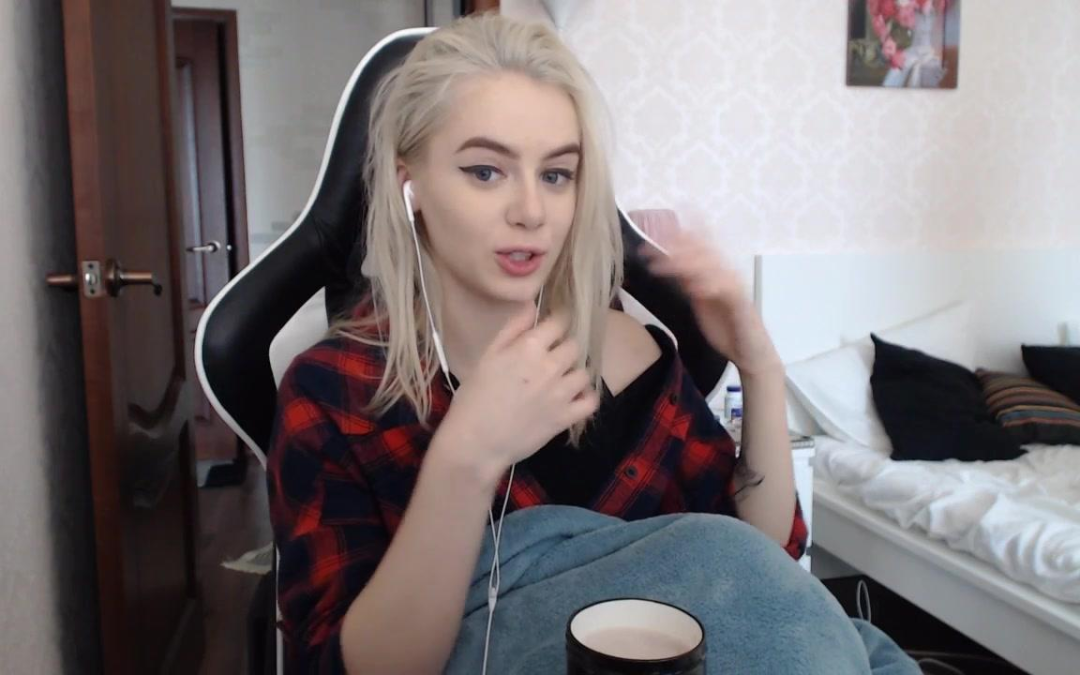 Valkyrare is just one of many well-known video game anchors. They have converted the supporter community into a seven-figure salary every day by signing exclusive contracts with the platform, participating in endorsement activities, and so on.

Although the scale of live broadcasts on Twitch and Youtube is not large, they are developing rapidly, which has tied the generation that grew up in the online world. They don’t care who wins the Grammy Awards, they just want to know if Valkyrae can win the next round of Among Us (Best-Selling Strategy).Slightly casual games).

Hollywood is now spending money in the entertainment industry, hoping to win over the anchors to abandon the original platform and cooperate with more profitable TV and film producers. However, the anchors do not need to rely on Hollywood to make their name, but Hollywood is thirsty for talents.

The speed at which live game broadcasting replaces traditional entertainment is shocking, even subverting the traditional definition of “celebrity”. 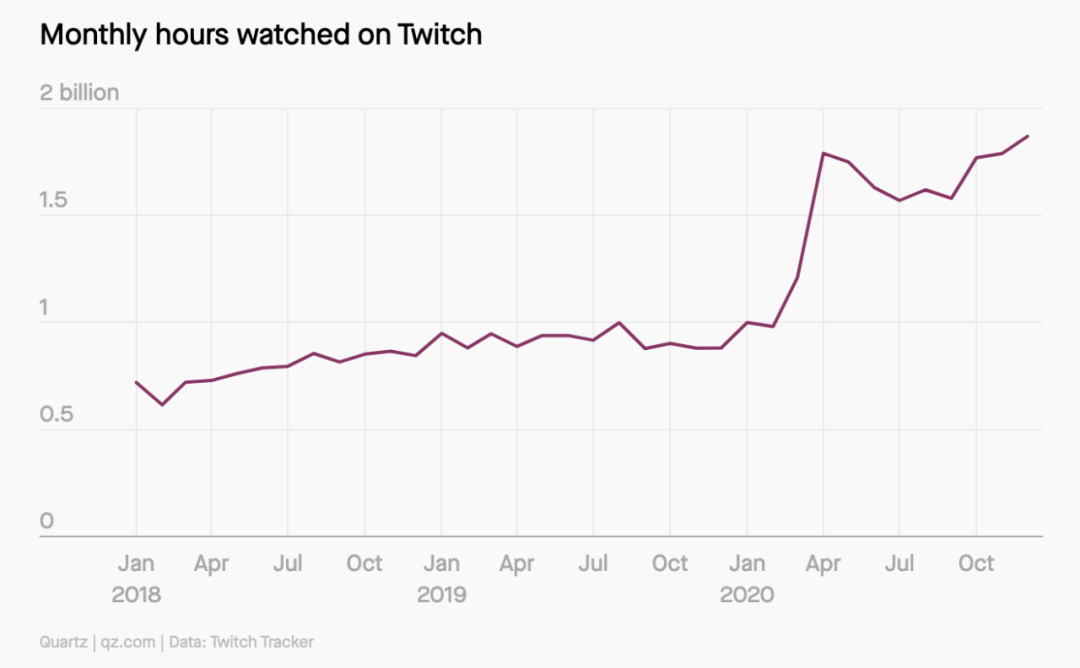 Why is “watching other people playing games” so addictive?

Like sports, video games are also competitive. But the process of “seeing” has gradually become equally important. What distinguishes “Watch Live” from other traditional viewing entertainment activities is its interactive elements.

This is like an opportunity to interact with celebrities online. Viewers watching the live broadcast can not only chat with other fans, but also interact with the anchor-anchors will pay attention to the chat area, thank the enthusiastic fans who gave gifts, and share their real private space with thousands of viewers.

Valkyrae said: “Usually I really like to drive a live broadcast as the background sound, just like having a friend by my side. This feeling is really great, even if I just hear other people’s voices, I will leave alone Of people feel involved.” 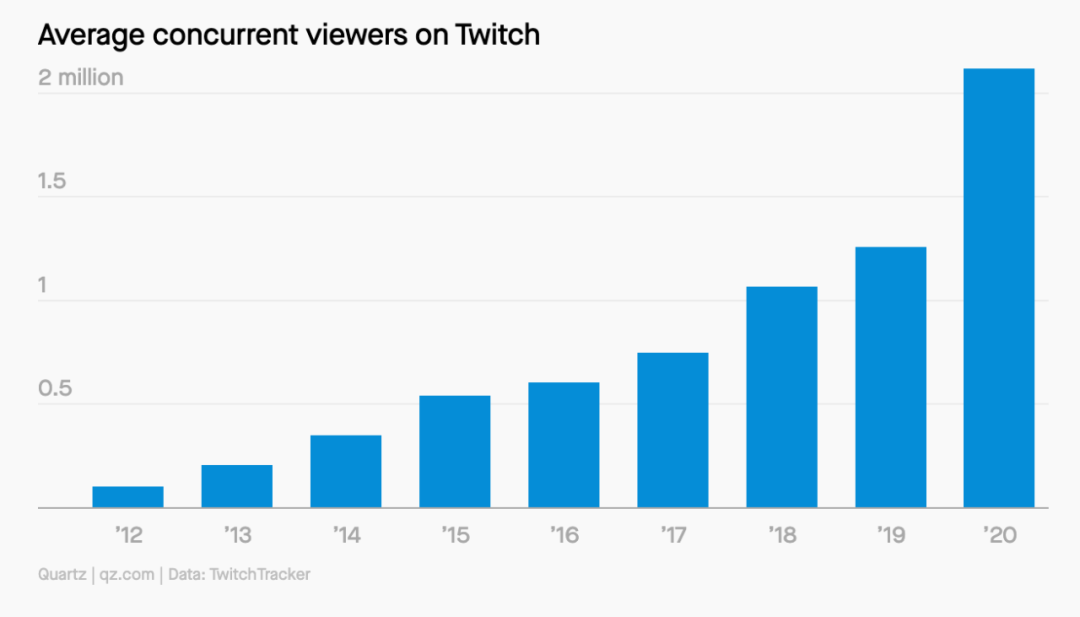 For Gen Z who grew up in the Internet environment, watching live broadcast is as natural as turning on TV and radio for the older generation. American Youth Marketing ResearchResearch company Ypulse wrote in a 2020 report that nearly half of people aged 13 to 39 have watched live online games. About one-third of Gen Z consumers go to Twitch to watch their favorite anchors at least once a week.

In addition to group and interactive nature, people love to watch game live broadcasts because it has no time and geographic restrictions. Netflix may make “scrolling drama” a trend, but platforms such as Twitch take it a step further. Viewers can open or exit the live broadcast at any time, and no matter where they are or what language they speak, they can always watch new live broadcasts.

This is perfect for the new generation who are used to acting on their own plans, not to mention watching live broadcasts without spending any money.

Which one is strong in the platform war?

The first to enter the market was Twitch. In 2011, when the founder of Twitch realized that game live broadcasts were developing much faster than other live broadcasts, it flew solo from the live broadcast website Justin.tv. In 2015, Amazon bought Twitch for $970 million. Now analysts say that Twitch’s valuation has doubled by at least 15 times.

The Twitch platform occupies 90% of the broadcast time and 64% of the watch time of the game live broadcast market. Ninja, Pokimane, AuronPlay, and other world-renowned anchors are all live on Twitch. Data shows that the average number of online viewers on Twitch at any time can reach about 2.5 million.

Twitch’s preemptive strike, Amazon’s support and a large audience base make it difficult for other platforms to break through its dominance. 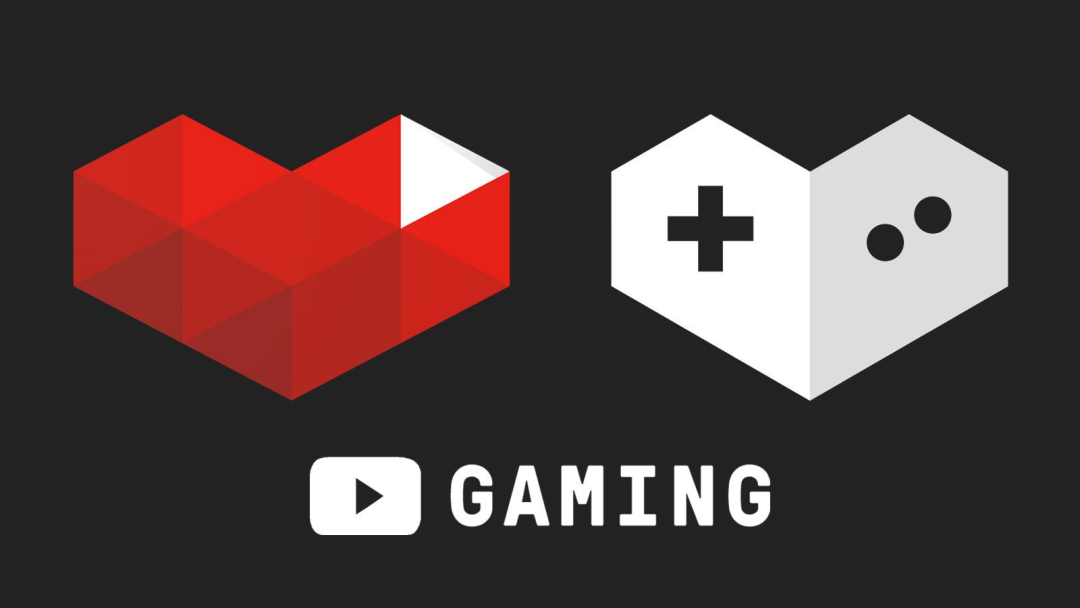 If Twitch is overwhelming in live broadcasting, Youtube is the king of VOD (Video On-demand) and has dominated the on-demand market for more than 10 years. Although Youtube Gaming only accounts for 5.5% of the total broadcast time in the market, viewing time has soared to 23% of the market. This doesn’t even count the video on demand.

Ninja, a celebrity in the live broadcast industry, has even more subscriptions on Youtube than Twitch. He does live on Twitch, but after that many live videos will be edited by a professional team, and then the streamlined video will be uploaded to Youtube. In terms of Internet traffic, Youtube ranks second only to Wikipedia, and such a large amount of traffic has also contributed to the development of the live broadcast business. 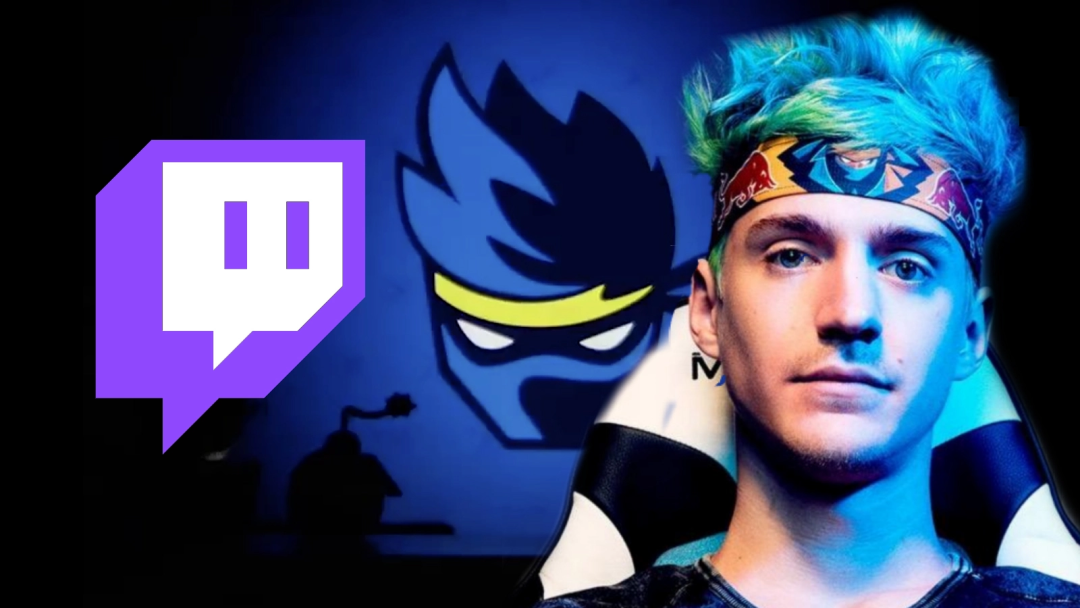 People come to Youtube to watch cat videos, but they are attracted to live games.

Youtube also wants to make some achievements in the live broadcast industry. Recently, they signed exclusive contracts with Internet celebrities such as Valkyrae, but it is still far from enough to wrestle with Twitch.

Facebook has also invested in games, but so far it is the least successful of the three.

Facebook Gaming’s market share has been hovering around 3%, mainly because it can’t hire people from other platforms, and the development of its own platform is also very slow. Part of the reason is probably that the company is always entangled in some political disputes, and the anchors do not want to be involved.

But Facebook Gaming’s biggest flaw may happen to be the company’s own policy that it considers the most unique-Facebook Gaming live account is linked to the anchors’ personal Facebook accounts. However, the platform is full of cheating game anchors. Even if Facebook takes measures to stop the behavior of profiting through cheating, the speed of solving it will not keep up with the speed of cheating.

At this time, the shortcomings of account association are fully exposed. The game team has no right to ban the account of the cheating anchor, just because it is integrated with the person’s personal Facebook account.

A few years ago, Valkyrae might still be on the shelves of the game station, but now she may be as famous as Brad Pitt. This is because not everyone is an anchor. The anchor needs to be a versatile player, not only the best game player, but also a live show host, or even a performer. As long as the broadcast starts, it has to constantly find ways to attract the attention of the audience.

“I think improvisation is a necessary skill for streamers,” Valkyrae said. “All the anchors have gradually developed the skills of sitting in front of the computer for six hours to’take off the draft’ to entertain the public. You must maintain the best mental state at all times.”

For us ordinary people, maybe five minutes of work report is a challenge. Among the thousands of anchors who have cameras and broadcast live on Twitch, in the end, only a handful of them can realize live broadcast as their main business. Only a few of them will become big anchors like Valkyare and Ninja. 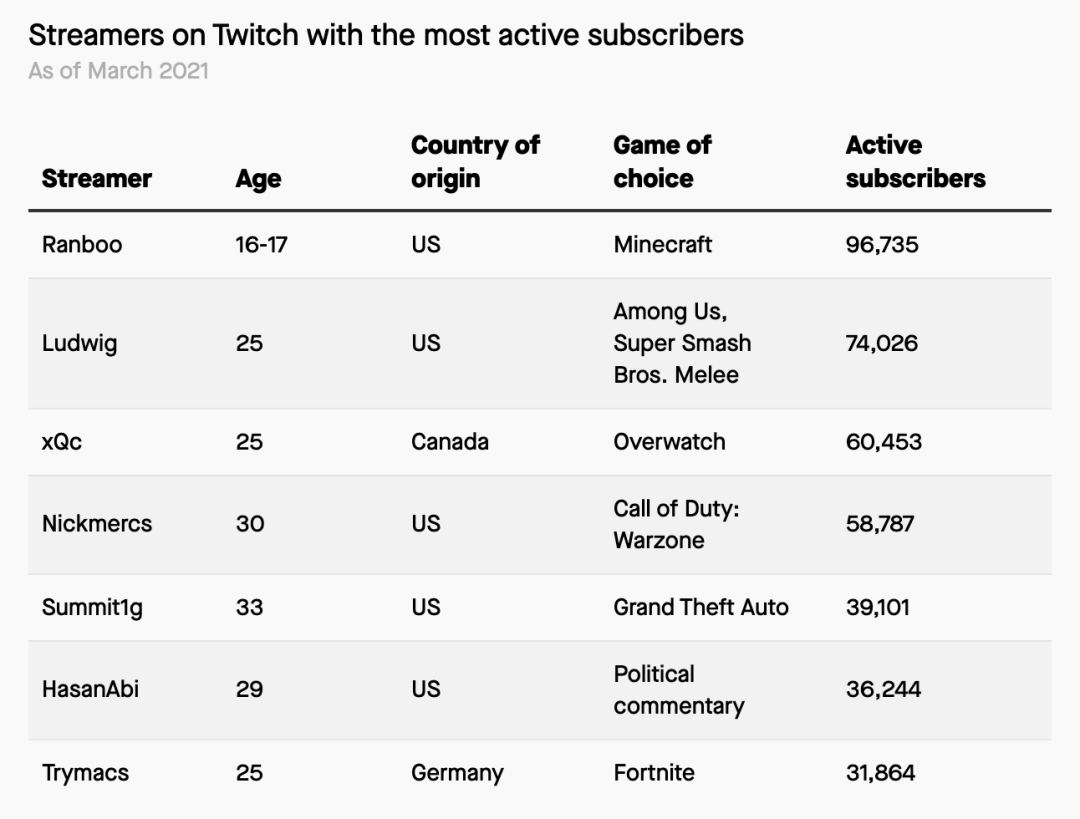 Data source: Twitch Tracker The picture shows the anchor with the most active followers on Twitch in March 2021

The most fascinating thing about video game live streaming is that the entire industry is constantly looking for new ways to interact with the audience. Unlike Hollywood, which is always struggling on the road of innovation.

Game live broadcast can be said to be a sunrise industry, so there are many possibilities. Role-playing games are very popular recently, and anchors can create virtual characters in the game. The recent hot GTA5 is one of them. The anchors can interact with other players, change the voice of the character, and even make a story background for it to entertain the fans.

The reason why this industry is full of innovative vitality is precisely because the live broadcast environment is a collaborative and interactive entertainment activity. The rise of live broadcasting also reflects the personality of the new generation of young people.

Maybe some anchors now only have four or five viewers, but who knows if he/she will be the next big anchor in the future?

The article is translated from Quartz, the original title is’How watching other people play video games took over the world’, and the author is Adam Epstein. It was edited and published by Xiaguang News Agency.