In the context of increasingly stringent regulatory measures for my country’s automobile data security, Tesla, which is plagued by negatives, announced yesterday that it has established a data center in China to achieve data storage localization.

Tesla announced that it has established a data center in China

On the evening of May 25th, Tesla’s official Weibo announced that it has established a data center in China to localize data storage and will continue to add more local data centers. All data generated from the sales of vehicles in the Chinese mainland market will be stored in China. At the same time, Tesla said that it will open the vehicle information query platform to car owners, and this work is in full swing. 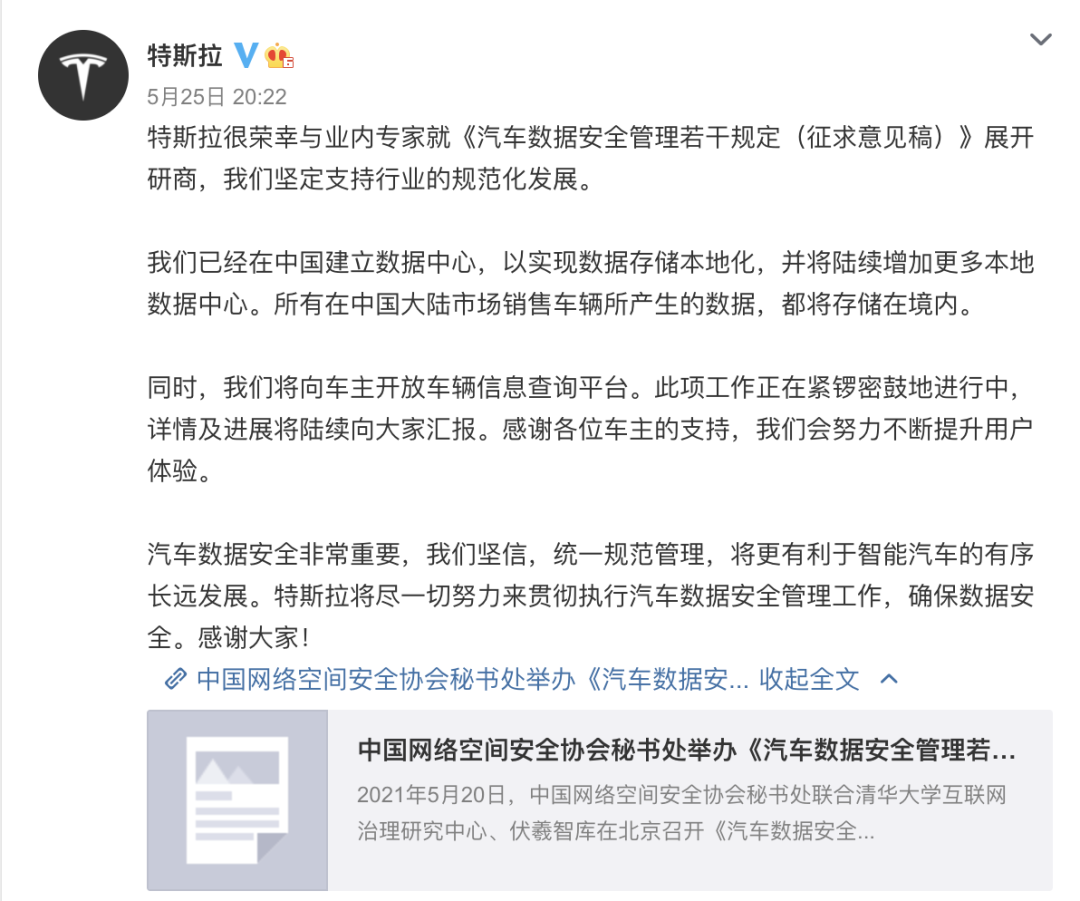 Tesla wrote at the end of the blog post: “Car data security is very important. We firmly believe that unified and standardized management will be more conducive to the orderly and long-term development of smart cars. Tesla will make every effort to implement it. Car data security management work to ensure data security.”

At the end of the blog post, Tesla also attached a link to the article “The Secretariat of the China Cyberspace Security Association organizes the “Expert Seminar on Several Regulations on Automobile Data Security Management (Draft for Comment)”. Some media analysis stated that Sla’s move may be related to the strengthening of my country’s automobile data security supervision.

It is understood that as early as May 12, the National Internet Information Office issued a notice for public comments on the “Several Provisions on the Management of Automobile Data Security (Draft for Comment).” Article 12 of the draft for comments stipulates that: personal information or important data shall be stored in China in accordance with the law, and if it is really necessary to provide it overseas, it shall pass the data exit security assessment organized by the national cybersecurity and informatization department. In addition, Article 16 also states that: if scientific research and business partners need to inquire and utilize personal information and important data stored in China, operators shall take effective measures to ensure data security and prevent loss; strictly restrict important data, vehicle location, and biological data. Query and utilization of sensitive data such as characteristics, audio and video of the driver or passenger, and data that can be used to determine illegal driving.

On the evening of May 12th, Tesla’s official Weibo forwarded the draft for comments and said, “We support and respond to the industry’s further standardization and jointly promote technological innovation. Everyone is welcome to actively advise relevant departments to promote the automobile industry. The industry develops in a healthy and orderly manner.”

Tesla has been in trouble recently, and data security has become the biggest crisis of trust

Tesla has been in constant trouble recently.

On April 19, on the opening day of the 2021 Shanghai International Auto Show, Ms. Zhang, wearing a T-shirt with the words “Brake Failure”, stood on the roof of a Tesla show car and shouted: “Brake failed.” Finally After Ms. Zhang was detained for five days, a complaint brought Tesla to court. The rights protection incident continues to ferment, and while the media has extensively reported on it, it has also aroused users’ concerns about Tesla’s safety.

On May 13, when a driver in Hangzhou drove a Tesla in a garage, the vehicle suddenly accelerated, unable to brake and hit a wall; on May 17, a driver was driving a Tesla through a viaduct in Taizhou and the collision was at the scene The traffic police who dealt with the traffic accident caused one of them to die; on May 18, when a driver in Chongqing drove a Tesla to the negative two to negative three floors of the garage, the vehicle suddenly accelerated spontaneously, and finally the brakes did not work. Hit a wall; on May 19, when driving a Tesla through a certain section of road in Guangzhou, because the car was too fast and out of control, he ran into a big tree on the side of the road. After about 15 minutes, he caught fire and spontaneously ignited. The vehicle in the accident was completely burnt. Fortunately, the occupants in the car escaped early and there was no danger.

Behind the “brake failure” incident, Tesla’s data security has also been questioned. On the one hand, some users have doubts about the authenticity of the accident vehicle driving data provided by Tesla, and worry that the data has been tampered with; on the other hand, there is a view that it is likely to harm national security for the outbound data of connected vehicles.

Although Musk responded to Tesla’s data security issues as early as March of this year, he said that Tesla will never provide the US government with any vehicle and user data collected in China or other countries. But at that time, someone in the industry said that Tesla has a data center in China, butThere is still a large amount of data that needs to be sent to the United States for processing every day.

As Tesla establishes a data center in China and gradually opens its vehicle information query platform to car owners, in the future, the crisis of trust may be lifted.