When NFT encounters artwork, a picture, a song, a video, and even an avatar can “spark sparks” with a string of codes, and the value will explode exponentially, breaking through the real world cognition.

“From a technical point of view, NFT is a digital certificate based on a contract based on blockchain technology.” Li, Director of the Blockchain Research Office of China Electronics Standardization Institute Ming told reporters that NFT has the characteristics of verifiability, uniqueness, indivisibility and traceability, and can be used to mark the ownership of specific assets.

Since the beginning of this year, celebrities, big Vs, and companies have created and launched their own NFT products, and digital art has become one of the fastest application scenarios for NFT.

When “everything can be NFT”, this series of “mysterious codes” connecting virtual and reality will become the key key to the meta-universe world, or another A zero-sum game under the hype of the currency circle and capital? Many issues need to be considered in advance.

NFT became popular “out of the circle”

In March this year, at Christie’s auction house, NFT digital art “Every day: the first 5000 days” was auctioned With 69.34 million U.S. dollars (about 450 million yuan), while breaking the record of digital art transactions, it also allowed the word NFT to break into the public eye.

NFT digital artwork “Every day: the first 5000 days”, created by the creator Beeple will be online every day from May 1, 2007 The released painting photos are combined together with NFT encryption technology after 5,000 sheets are assembled. Image source Christie’s official micro screenshot

in NFTOn the trading platform Opnesea, seemingly ordinary mosaic avatars, pictures, and collectibles are frequently sold at “sky prices.” Data shows that Opensea has accumulated sales of more than 10 billion U.S. dollars so far, and the average price of each NFT is 872 U.S. dollars.

International luxury goods giant LV also launched an NFT game, where players have the opportunity to get free NFT gold postcards worth between 20,000 and 20 million U.S. dollars.

The concept of meta universe continues to be hyped, and the market sees the business opportunities of NFT. In the opinion of some people in the industry, Metaverse provides more diverse application scenarios for NFT, and NFT will become an important tool for realizing digital assets and circulation transactions of virtual items.

Opposing voices believe that the sudden popularity of NFT and Meta Universe is probably behind some elaborate hype by the media and the currency circle. According to media reports, the bidder who won the “sky price” NFT paintings at Christie’s before was the founder of a certain NFT fund.

“NFT itself has certain financial attributes, especially the emergence of foreign’sky-priced’ NFT artworks, which allows more speculators to find new financial speculation tools and accelerate the bubble The formation of.” Li Ming said.

At the same time, in view of the domestic regulatory attitude towards virtual currency, some institutions and companies are also trying to downplay the “token” attribute of NFT, preferring to call it “token” “. In June of this year, when Alipay launched the NFT payment code skin, it was emphasized that NFT is an effective and reliable technical means to resolve the right of digital artwork, which is fundamentally different from virtual currencies such as Bitcoin.

currently includes NFT-related products from major manufacturers such as Tencent and AliOn the platform, the words NFT have been deleted and changed to titles such as “digital collections”.

“At least four digits” “I will come out after the speculation” “There is no way to supervise private transactions”… In an AntChain NFT torch digital collection group, the reporter found that the original price of 39 yuan digital torch has already been speculated to several thousand yuan or even tens of thousands of yuan after a crazy price increase.

On September 16, Alipay issued a limited edition of 21,000 Asian Games digital torches, which were sold out in less than 4 minutes. Although AntChain issued a statement on September 24, it firmly opposes all forms of digital collection hype, and resists rights and interests transactions, standardized contract transactions and other illegal activities. But on the Internet, transactions and discussions about the digital torch have never stopped.

Under the carnival, NFT is deviating from value and moving towards alienation.

Art, games, hype, currency circle, meta universe… For ordinary people, it is difficult to distinguish which is the true label of NFT.

“If you want to play for a long time, you can’t just want to cut the leeks and run away in the short term, destroying the entire market.” Long-term focus on NFT, virtual currency Investor Liu Yong believes that the current market is more speculative and hype about NFT, and there are not many people paying attention to its true value.

“Some mainstream currency exchanges are also issuing new coins under the concept of NFT, which is very common.” Liu Yong confessed to reporters that sometimes it is difficult Determine if this is an investment or a scam. As far as I am concerned, whether it is speculation in currency or NFT, it is actually speculation. Follow the market trend and make quick money.

“One USDT=1 U.S. dollar, you can directly use RMB to USDT to trade on the platform. It is common to all mainstream platforms, which is very convenient.” During the conversation, Liu Yong turned on the phone, Showed to reporters how to buy NFT coins on the exchange.

“The apps on my mobile phone can no longer be downloaded in domestic app stores. You need to go to foreign app markets. Or download them from unofficial markets, but they are not safe. “In his view, the true value of NFT lies in the realization of the capitalization of virtual items, and it should be far away from the currency circle.

Young people who don’t want to step on their feet are waiting for opportunities in the midst of risks.

The reporter found that young people are more likely to accept and participate in NFT transactions. They hope to capture a new round of wealth creation opportunities.

“In fact, there is a lot of risk here. “In Liu Yong’s view, the risk of investing in NFTs is greater than speculating in coins. “NFT products have weak liquidity and need someone to take orders. “

Among the several NFT exchange groups that reporters joined, the post-90s and post-00s accounted for more than half, and they were also the most active groups. Among these groups, from time to time Someone publishes advertising information such as “Raffle Airdrop”, “Free NFT Assets”, “NFT Investment” and other advertising information. These links and QR codes usually induce users to download App or register on the platform.

< /div>“For some NFT games and trading platforms, for the purpose of attracting users and publicity, the platform will issue’airdrops’ to users’ wallets from time to time. “NFT player Li Xu told reporters that this kind of “airdrop” can actually be regarded as rewards or dividends, one is for internal beta users and users, and the other is for the project to go online to attract popularity. “This is in the currency circle. very common. “Li Xu said.

On a domestic NFT website, the reporter found that some photos, animation designs, digital cultural creations, etc. were priced from dozens, hundreds, or even higher. Ten million yuan, users can click to buy directly. At the same time, users can also upload pictures to cast their own NFT works, and buy more “fuel”, the higher the level of the works that can be cast. 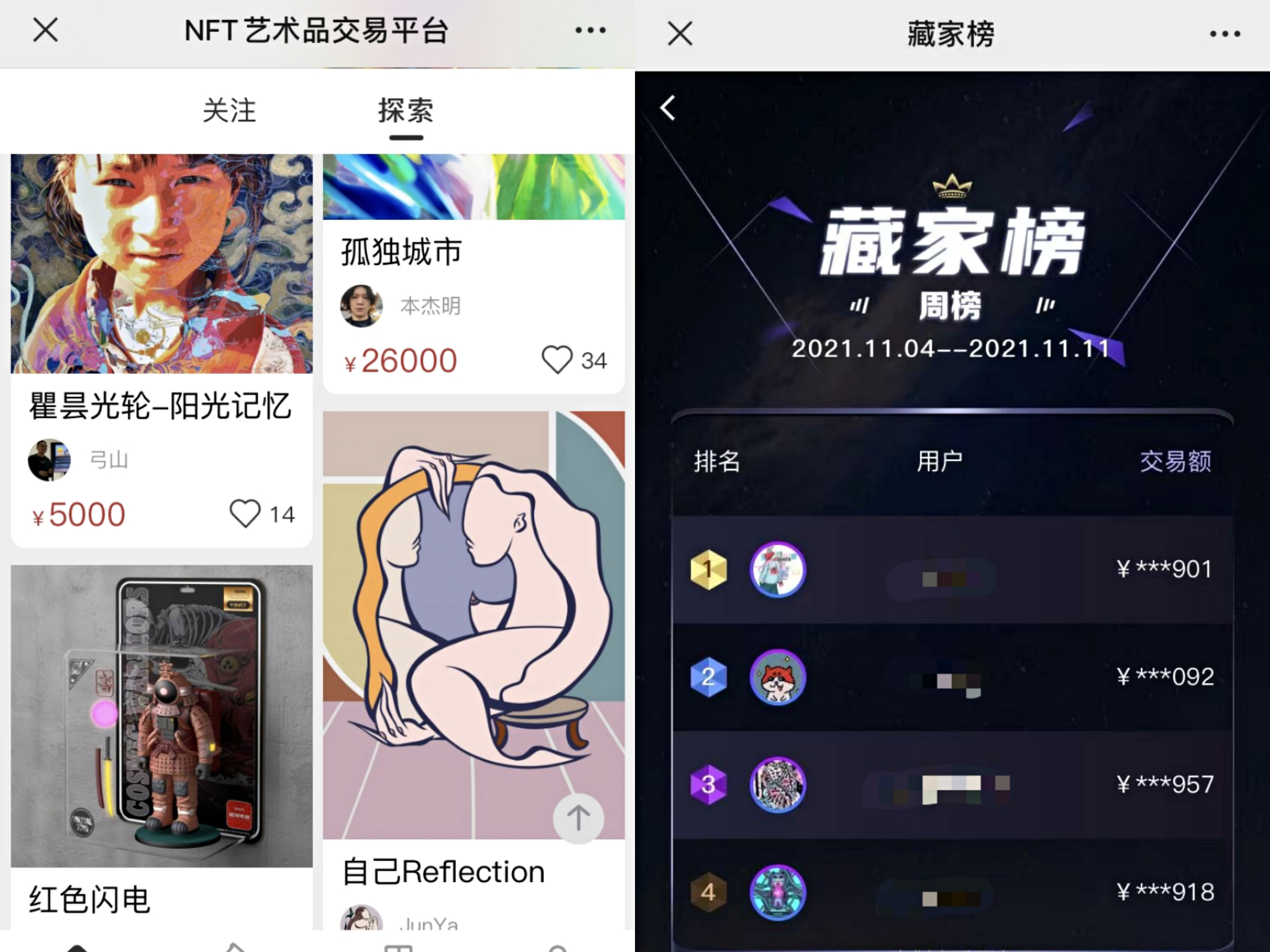 official website information shows that this NFT digital asset trading platform was founded in May this year. Currently, more than 5,000 creators at home and abroad have settled in, with more than 100,000 registered users. .

” Everyone can upload minted NFTs, but not every NFT has value. “In Li Xu’s view, the platform should allow collectors to interact and socialize with NFT creators to form value growth, rather than just adding a zero to the end of the price, hoping to take over.

However, in a frenzied market, the “sound of reason” is often submerged in the “illusion of wealth creation.”

Beware of the “drumming and spreading flowers” scam

In Xiao Sa’s view, domestic NFT asset trading venues often do not have such approvals, so their legal circulation will be restricted. “Based on a series of potential risks of NFT, we do not agree to open the NFT trading market now.” Spread to listed companies and the secondary market. Some behaviors such as rubbing hot spots and speculating concepts are also arousing the vigilance of the regulatory authorities. A few days ago, the Management Department of the Shenzhen Stock Exchange’s Growth Enterprise Market issued a letter of concern to Chinese Online, requesting an explanation of the relevance of the interactive reading business to the concept of Metaverse and the concept of NFT. In addition, a number of listed companies have successively received letters of concern from the exchange, requesting clarification on whether the company and related parties have been involved in hot spots, market manipulation, and illegal trading of company stocks.

Industry professionals believe that the legal nature, transaction methods, supervision subjects, and supervision methods of NFTs are currently unclear in China, and there are risks such as speculation, money laundering, and financial productization of NFTs. , We should maintain a cautious attitude towards NFT investment and be wary of financial scams like “drumming and spreading flowers”.

“Whether it is priced in cryptocurrency, or a combination of lending, mining, price oracle and other schemes to increase secondary liquidity, it violates my country’s current regulatory laws and regulations. Wang Dawei, a lawyer from Beijing Tianyuan Law Firm, told reporters that the NFT investment market has the following risk points: the compliance risk of the NFT trading platform itself; whether the NFT issuer constitutes the compliance risk of ICO (ie currency issuance), whether InfringeCopyright risk; whether there is liquidity risk when the NFT buyer resells.

“Whether the NFT transaction is legal and compliant needs to be judged according to specific circumstances. For example, if the direct transaction between two natural persons is denominated in RMB and there are no other violations, The current regulations do not prohibit it. But if a platform is set up to match transactions, then the risk of platform compliance is relatively high.” Wang Dawei said.

“The regulation should focus on the pricing, sales (auction), marketing model, and second-hand monopoly (re-sale) of NFT products.” Xiao Sa reminded the difference On overseas NFT trading platforms, at this stage, there is no domestic NFT secondary transaction, transfer gift and other scenarios, and NFT has not yet seen a financial trend. However, the strong domestic supervision of financial behavior will not change. Based on the current risks of NFT, we should focus on enhancing the awareness of legal compliance in investment NFT behavior, and strengthen the supervision and prevention of potential risks in the industry.

(The original title is “NFT: To the Metaverse, or Towards a Big Scam?”)