The Biden administration has warned that 100 million Americans may be infected with the new crown this winter, and a large number of deaths will occur. At present, some new mutant strains of the new coronavirus Omicron strain have shown strong immune escape ability.

The above information comes from a background briefing at the White House where a senior federal government official made predictions based on models. The White House is trying to push Congress to approve additional funding to fight the coronavirus. At the same time, as the death toll from the new crown in the United States approaches 1 million, the White House said it will mourn the moment when it exceeds one million.

On May 8, local time, Ashish Jha, the White House’s new coronavirus response coordinator, responded to the above prediction in an interview with ABC, saying that if he is not prepared to take the lead, Americans’ immunity to the new coronavirus, which continues to mutate, will likely see considerable surges in infections, hospitalizations, and deaths this fall and winter.

Jha said a similar situation has occurred in the past two winters, and it may happen again this year. Jha said the U.S. Congress should provide resources, especially the $22.5 billion Covid-19 Supplemental Relief Fund, to increase funding for testing, treatment and prevention, especially vaccination.

American life expectancy has fallen by 2.26 years in the past two years

The poor response to the pandemic has had a significant impact on the health of Americans. For the second year in a row, COVID-19 has become the third leading cause of death in the United States, after heart disease and cancer, according to the CDC’s Morbidity and Mortality Weekly Report (MMWR). Looking at the data, in 2021, more than 1 in 8 deaths in the United States will be caused by COVID-19, up from about 1 in 10 deaths in 2020.

The COVID-19 pandemic in the U.S. has also contributed to a significant drop in U.S. life expectancy. According to a report written in April by public health experts in Colorado, Virginia and Washington, D.C., life expectancy for the entire U.S. population was 78.86 years in 2019, 76.99 years in 2020, and 76.6 years in 2021. These are rare declines in American history. 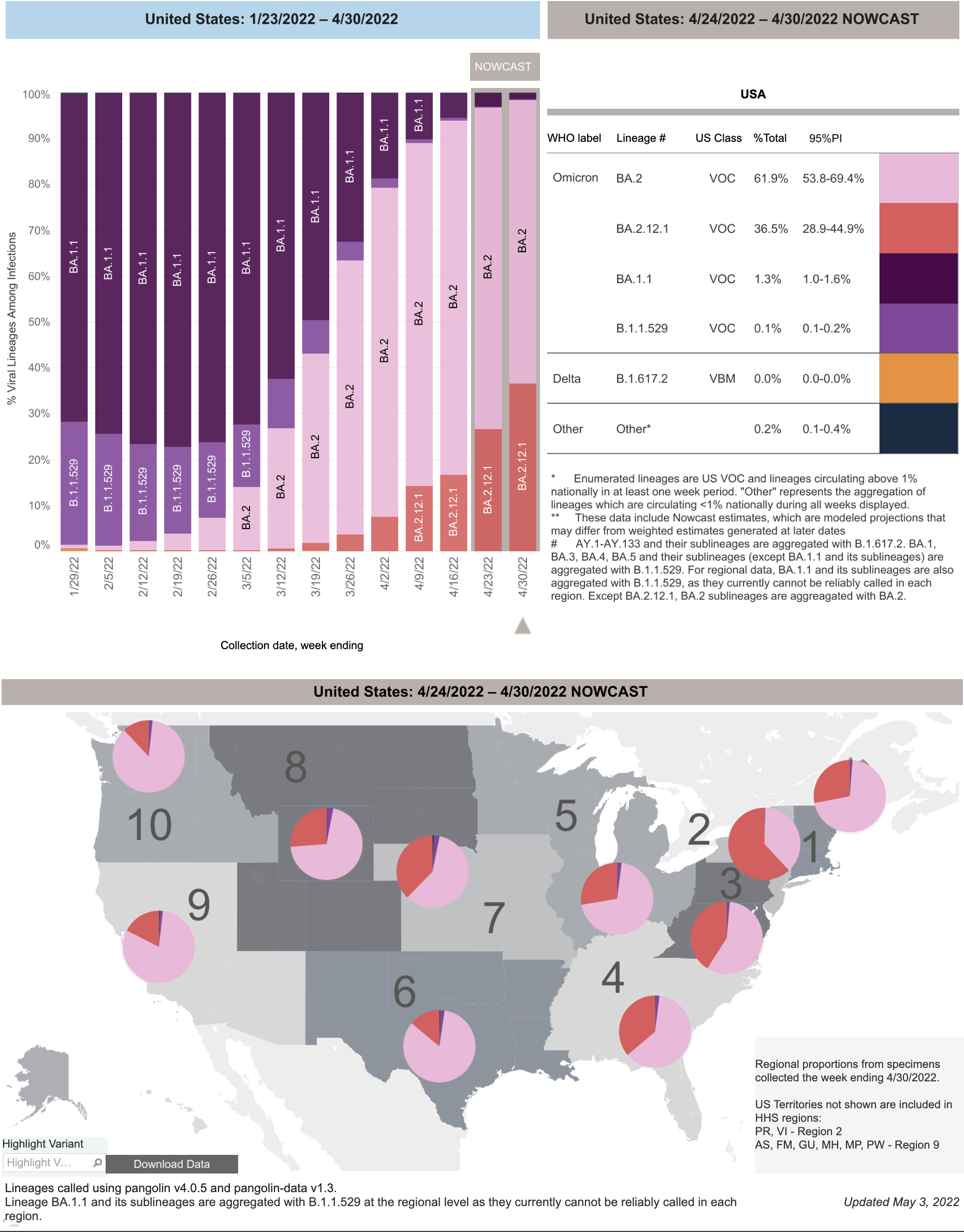 There is currently no evidence that BA.2.12.1 causes more severe symptoms than its various sub-variants of the original Omicron strain.

Omicron was widely believed to be less virulent, but recent studies from two teams from Hong Kong University and Harvard University have shown that in the case of unvaccinated Infection with the Omicron strain faces a similar risk of death as infection with the original SARS-CoV-2 strain.

Focus on the L452 site mutation of the spike protein

Scientists used genome sequencing technology to identify SARS-CoV-2 variant strains. By analyzing the similarities and differences between these sequences, scientists can track the prevalence of mutant strains and monitor changes in the genetic code of new coronavirus mutant strains. This information could lead to a better understanding of how variation affects public health.

BA.2.12.1 has attracted much attention because of the mutation of L452Q on its spike protein. L452 is the key mutation site of the Delta mutant strain. L452 gives Delta the advantage of transmission and immune escape, while the original Omicron strain does not have this mutation.

At present, there are two Omicron variant strains that have attracted much attention in the world: BA.4 and BA.5. According to the latest data released by the National Institute of Infectious Diseases in South Africa, the positive detection rate of the new coronavirus in South Africa is 31.1%, approaching the highest record in the country. The L452 site on the spike proteins of BA.4 and BA.5 also mutated, indicating a stronger immune escape ability. Affected by BA.4 and BA.5, South Africa may have entered the fifth wave of the epidemic.

According to the current preliminary research, BA.2.12.1, BA.4 and BA.5 have a communication advantage of more than 25% compared to BA.2. stronger at the same timeImmune escape capability means more breakthrough infections.

The latest research by Xie Xiaoliang’s team at Peking University shows that BA.2.12.1, BA.4/BA.5 have the strongest ability to escape humoral immunity. Of particular note, compared to BA.2, BA.2.12.1 and BA.4/BA.5 showed stronger sera from subjects vaccinated with three doses of vaccine and then infected with Omicron BA.1 neutralization escape.