Li Kuiwen, Director of the Statistical Analysis Department of the General Administration of Customs, said that under the more complex and severe external environment faced by China’s foreign trade development, China’s foreign trade import and export in the first four months remained unchanged. Maintained growth, the number of foreign trade enterprises with import and export performance increased by 4.7% year-on-year. This fully reflects the characteristics of China’s economy with strong resilience, sufficient potential, wide room for maneuver, and long-term positive fundamentals that will not change. China’s goal of maintaining stability and improving foreign trade throughout the year is still well supported. 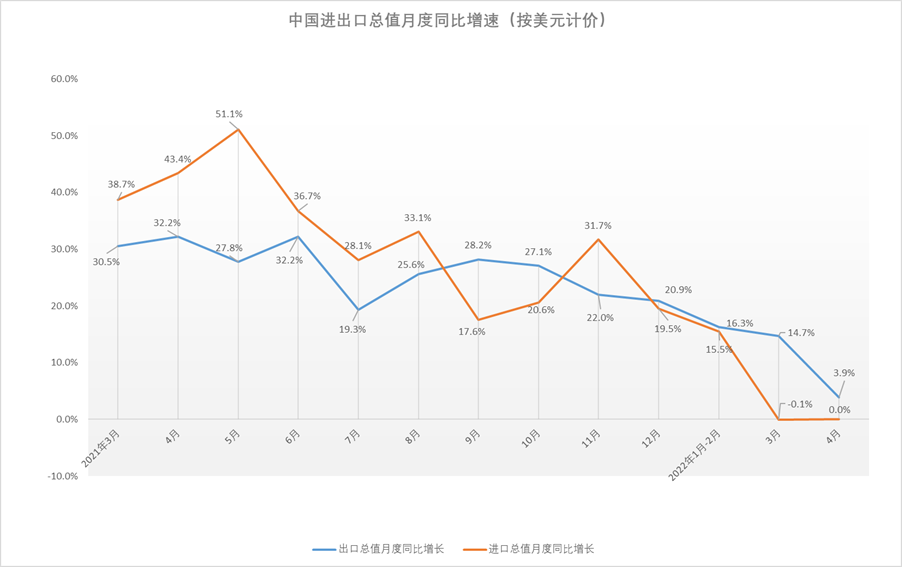 Su Qingyi, a researcher at the Institute of World Economics and Politics of the Chinese Academy of Social Sciences and deputy director of the International Trade Research Office, told the news that the decline in export growth, the impact of the external international situation and the internal The epidemic situation has played a role.

Zhou Maohua, a macro researcher at the Financial Market Department of China Everbright Bank, told the news that the slowdown in export growth in April was mainly due to the sudden multi-point spread of the epidemic, which affected freight logistics and industrial chain supply. The chain has caused certain blockages, affecting the start-up and delivery of foreign trade enterprises; at the same time, the cost of raw material input and supply bottlenecks continued to have an adverse impact on foreign trade enterprises.

Oriental Jincheng chief macro analyst Wang Qing told the news that with the gradual restoration of overseas industrial chains, the trade substitution effect of China’s exports has weakened accordingly, especially in Southeast Asia such as Vietnam recently. The national epidemic has eased, and exports have been quickly repaired.

Wang Qing said that the price is an important factor for the export value to maintain positive growth in April. At present, China’s major export destinations such as the United States and Europe are experiencing high inflation, and the prices of China’s major export commodities have risen accordingly, which supported the growth rate of exports in April to a certain extent.

In the first quarter of this year, the pull rate of net exports to GDP was 0.2%, lower than 1.0% in the fourth quarter of last year and 1.7% in the whole of last year.

“Considering that the epidemic situation in Shanghai is entering a stage of decline, the growth rate of export value may rebound slightly in the later period; but the general direction of continuous decline in export value in the second half of the year will not change. This means that the driving force of external demand on economic growth this year will be significantly weaker than that of the previous year, and stable growth will rely more on domestic demand.” Wang Qing said.

Zhou Maohua said that it is expected thatForeign trade exports are expected to improve in May, and the impact of the epidemic in April is a short-term impact. As the domestic epidemic situation is gradually brought under control, local governments have coordinated and introduced targeted policies and measures to smooth the transportation, logistics and industrial chain supply chains, and speed up the resumption of work and production. Foreign trade is expected to gradually resume. Back on track.

In April, China’s imports were US$222.5 billion, flat year-on-year, up 0.1 percentage points from the previous month.

Zhou Maohua said that imports continued to decline in April, mainly due to the high import cost of energy commodities, which weakened the import demand of some enterprises. The import volume of commodities such as soybeans and soybeans continued to decline; the uncertainty of the outlook for global economic recovery and the strong performance of imports last year also affected corporate inventory plans to a certain extent.

Zhou Maohua said that it is expected that the growth rate of imports in May will remain relatively sluggish, mainly because the prices of overseas energy commodities continue to run high and fluctuate violently, and the high base last year was affected; global economic prospects Uncertainty may continue to inhibit the motivation of enterprises to replenish inventories.

Wang Qing said that with the receding impact of the current round of the epidemic, coupled with the steady growth of domestic investment, the import demand for some bulk commodities will be driven, and the growth rate of imports will soon return to positive. And is expected to appear a round of rebound process. It is worth mentioning that, affected by the Ukrainian crisis, the prices of international bulk commodities such as crude oil will remain high for a period of time in the future, which will also drive the growth rate of my country’s imports to a certain extent.

How will foreign trade go in the future?

Zhou Maohua said that from the perspective of trends, China’s foreign trade faces challenges in several aspects: First, the global epidemic is repeated, and high requirements are placed on China’s precision and efficiency of epidemic prevention.Strengthen the stability of China’s industrial chain, supply chain, and logistics chain; second, the prospect of overseas demand is slowing down, due to repeated overseas epidemics, geopolitical conflicts, high inflation pressure and overseas stimulus policies, dragging down the prospect of global demand recovery; third, energy commodities Market volatility and supply bottlenecks continue to put pressure on companies in some industries in China.

Su Qingyi said that in the future, foreign trade will be under great pressure. Under the circumstance that the external situation is difficult to improve, the main focus is on the control of the internal epidemic.

Zhu Qigui, Secretary of the Party Committee and Distinguished Professor of Shanghai Advanced Institute of Finance, also told the news that as China’s new crown epidemic is gradually brought under control, the subsequent demand from producers and consumers will be improved. The large-scale release will alleviate the backlog in port entry and delayed arrival caused by the closure and control period, which will greatly promote the growth of imports and exports in the future.

“The continuous optimization of the international market layout with close regional cooperation and diversified trade can not only improve the vitality and potential of my country’s foreign trade, but also promote my country’s cooperation with the ‘Belt and Road’ Bilateral trade between countries along the Belt and Road and RCEP member countries continues to grow.” Li Kuiwen said that the growth rate of imports and exports between my country and countries along the “Belt and Road” in the first four months was 7.5 percentage points higher than the overall growth rate.