2B heroes out of my generation, one year into the rivers and lakes reminder.

Editor’s note: This article is from WeChat public account “Thinking Soup” (ID:ideasoup), the author thinks that the soup is Zhang Fan.

2B heroes out of my generation, one year into the rivers and lakes reminder < /span>.

From Enlightenment B2B in 2015, to supply chain finance, corporate services, and industrial internet. Unconsciously, I have been from the industry to the Internet for nearly five years. 2B Internet is like a besieged city. The Internet giants are all in the layout 2B. Capitalists think that 2B has a future. A large number of people think that 2B is a good direction and wants to come in, but there are also a large number of 2B people who abandon it. From the perspective of entrepreneurs, the more practical explorations, the more cognitive reflections, the more awe-inspiring the essence of business. To B entrepreneurs, it’s too south!

Why toB start a business, it’s very important to be clear about it. If you are a business, making more money is the goal;

If you want to learn more about the value of capital, you need to learn the areas that you are not good at, you need to maintain the company’s continued growth, and you need to overcome a lot of problems than making money. Especially in the current capital environment, the era of capital paying for dreams has passed. 2B entrepreneurship, not only must have an imaginative track direction, but also have a persuasive performance, self-improvement can be strong.

Some industry tracks seem big but too traditional, and the actual changes can be small. They may not be suitable for Internet promotion at the current stage. If they do, they will become competitive in the industry. Business;Some service tracks have obvious demand growth, but the government-led business areas of resource allocation often have solid business relationships. Entrepreneurship wants to change business rules and block people’s wealth. Murder parents; Some technical track sounds high, but the application of new technology needs time to cultivate, and users need to change their mindset. The management needs of 2B often only exist in large enterprises, and entrepreneurs can’t get cash flow right, it is also a dead end. One.

From the perspective of Internet entrepreneurs, the choice of 2B track is the first important.

Selecting a subdivision, with market increments, small and scattered, the competition has not reached the Red Sea, at least half of the victory. 2B entrepreneurs from the industry, such as the industry itself failed to achieve these conditions, limited by the industry background and accumulation, can not change the industry, to make money more realistic and efficient, is also very good business.

2B entrepreneurship, one problem to be solved after all is, what exactly is the need to achieve?

Create or meet the needs? Does 2C create demand or 2B meets demand?
The logic of the C-side Internet is to create a demand, or to dig an unmet need, and to beat a demand to burst, this has a saying. such as shopping, social communication, game entertainment, murder time, taxi travel, eating and taking, buying cosmetics, self-help fitness and so on. In most cases, users themselves can’t tell what kind of Internet products they need.
Meet the needs of C-end users
Actually created a
“Taobao”,
“WeChat”, “Today’s headlines
“,
“shake
Tone
“,
“Drip”
,
“US group takeaway” Internet products.
The 2B Internet, faced with a commercial society, was originally a commercial relationship with suppliers and service providers. At this time, the B-end users are very clear about what they need. Only when they can meet the needs, will they switch to new service providers and accept 2B Internet products and services.
Many times, B-end users have a lot of needs, and fake demand can actually be understood as a icing on the cake. 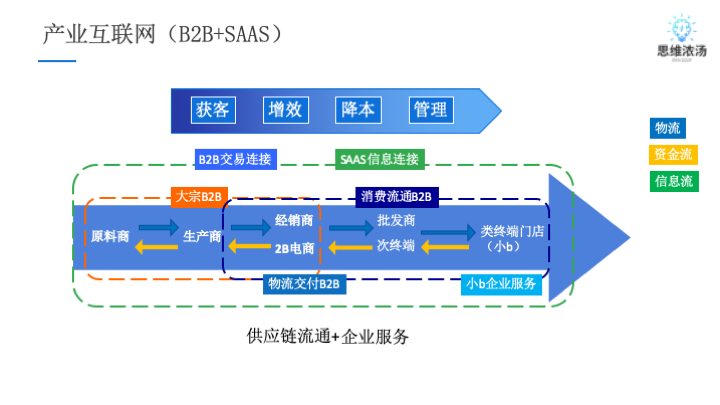 The demand for customers, finance, and technology products to help businesses grow bigger is relatively rigid. The cost and cost of B-side companies are relatively low. A 2B project that can’t meet the user’s needs, the most direct way to judge is that the company is developing slowly. Although the 2B cycle is long, 2B plus the Internet will bring about an increase in efficiency.