The artist “fan economy” has become a new growth point in the eyes of merchants and e-commerce platforms.

When advertising and pre-sales can’t fully stimulate consumption, how can a business’s full goal be achieved? As a result, the artist “fan economy” has become a new growth point in the eyes of merchants and e-commerce platforms.

Double 11, getting tired. One month ahead of the shopping festival began to create an atmosphere and stimulate consumer demand. When advertising and pre-sales can not fully stimulate consumption, how can the goal of business fullness be achieved? As a result, the artist “fan economy” has become a new growth point in the eyes of merchants and e-commerce platforms – through the artist activities to put fans into this “buy buy buy” gravitational field.

The annual shopping festival is refreshing records. This year, the 11-day cat has generated a total of 268.4 billion yuan in transactions. For this number, brands and platforms need to be prepared in advance for several months, and they want to use various methods and develop a variety of gameplay to stimulate consumers’ desire to buy. 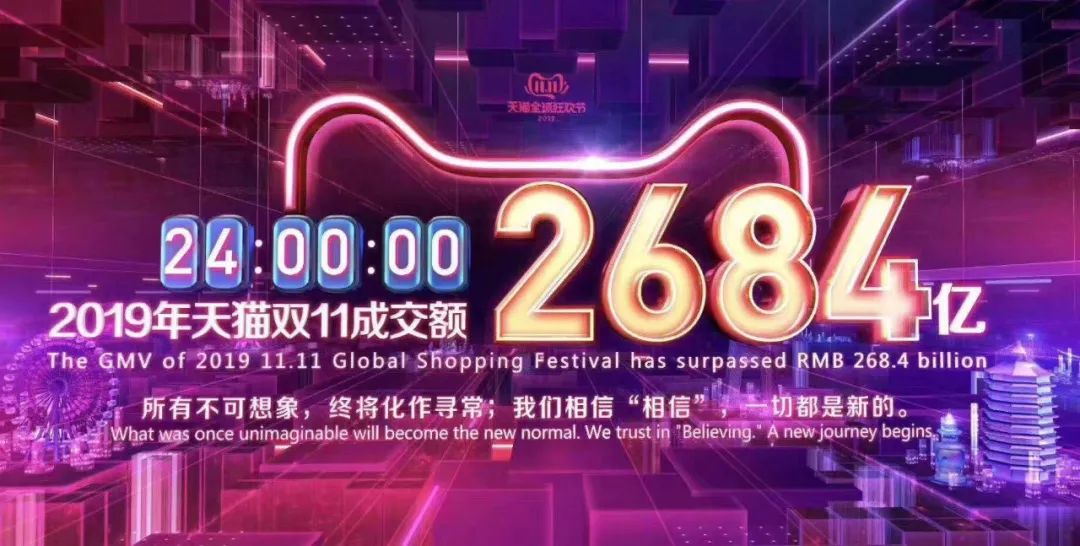 FUNJI(ID:FUNJIdata)A phenomenon was discovered when organizing artist data: In the month before Double 11, the artists suddenly collectively added a lot of new brand cooperation. And endorsements, Many stars collective microblogging brought goods, became a “normal”.

So, for fans, the sales of the Aidou Cooperative brand during the Double Eleven period is their most concerned data. Because this directly reflects the fan purchasing power and commercial value of their love beans.

This time, even some fans regard it as an important node for Aidou to get better resources in the future. After the pre-sale of Taobao platform officially started, many fans are like to buynumberalbum,E-newsletter goes to the relevant products to do “second cut”, “flag flag” to rush sales, not forgetting after buyingGo to Weibo and encourage othersfan participation.

This year is a particularly difficult task for fans. FUNJI(ID:FUNJIdata) Observing, this year’s two major e-commerce platforms and a large number of brands Businessmen have made great efforts in the stars, so that endorsements and cooperation are closely coupled with the Double 11, fully stimulating fans to buy. At present, the fan circle’s moves to love the beans and make data are all appearing in the double 11 preheating activities.

FUNJI(ID:FUNJIdata)The two major e-commerce platforms have been compiled this year, and all the star-related activities in the pre-sale phase: < /span> 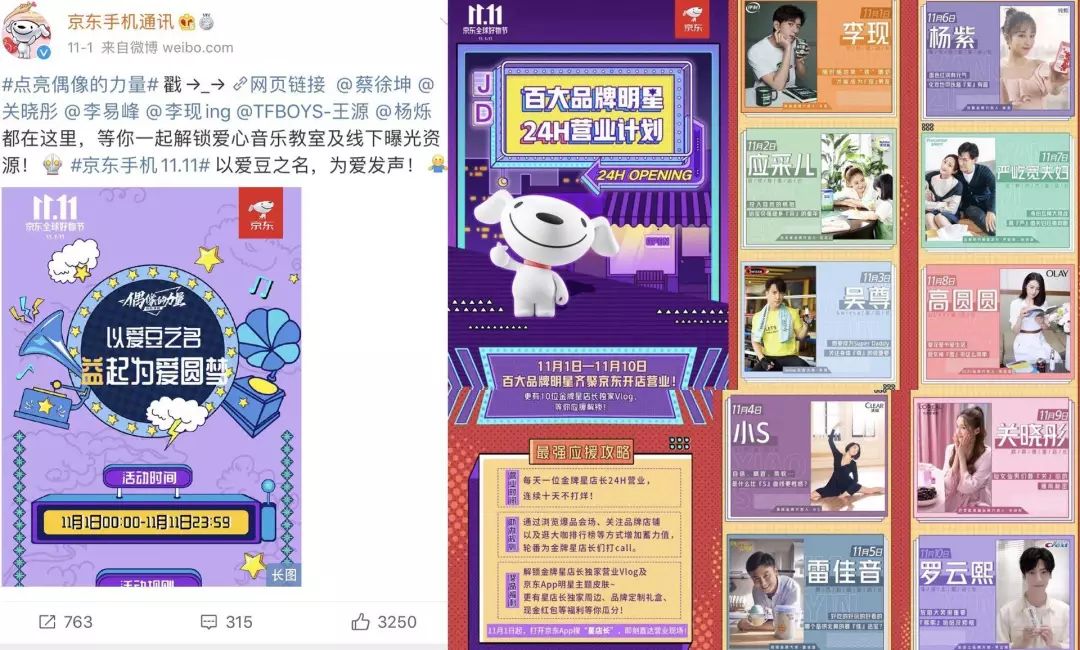 Regular gameplay includes star limited gift boxes (big posters highlight sales), list investment, consumer scarce resource competition (on-site qualifications, limited gifts), task unlocking, and more. It is also the platform and the brand side that completely copied the sales performance of the rice noodles, so that this year’s double eleven battlefields have many more girls who have been through the battlefield.

It’s certainly not enough to play the role of the rice noodle. This year’s platform and brand side have also made innovations – in line with the recent trend of live delivery, the live broadcast and the star will be combined. The two platforms set up a star live broadcast of the “Double 11 Mingxing Hotline” and “Star 24H Business Plan”. Through the live broadcast, the artist is transformed into an online brand salesman.Consumers (fans) communicate.

They can also use the professional Taobao anchors like Li Jiaqi and Wei Ya to bring goods in the live broadcast room, inspiring the content consumption of the fans (you have to look at the idol), so that you can purchase the relevant brand products that you endorse (love beans need) Support, I also feel that I bought it without losing money). 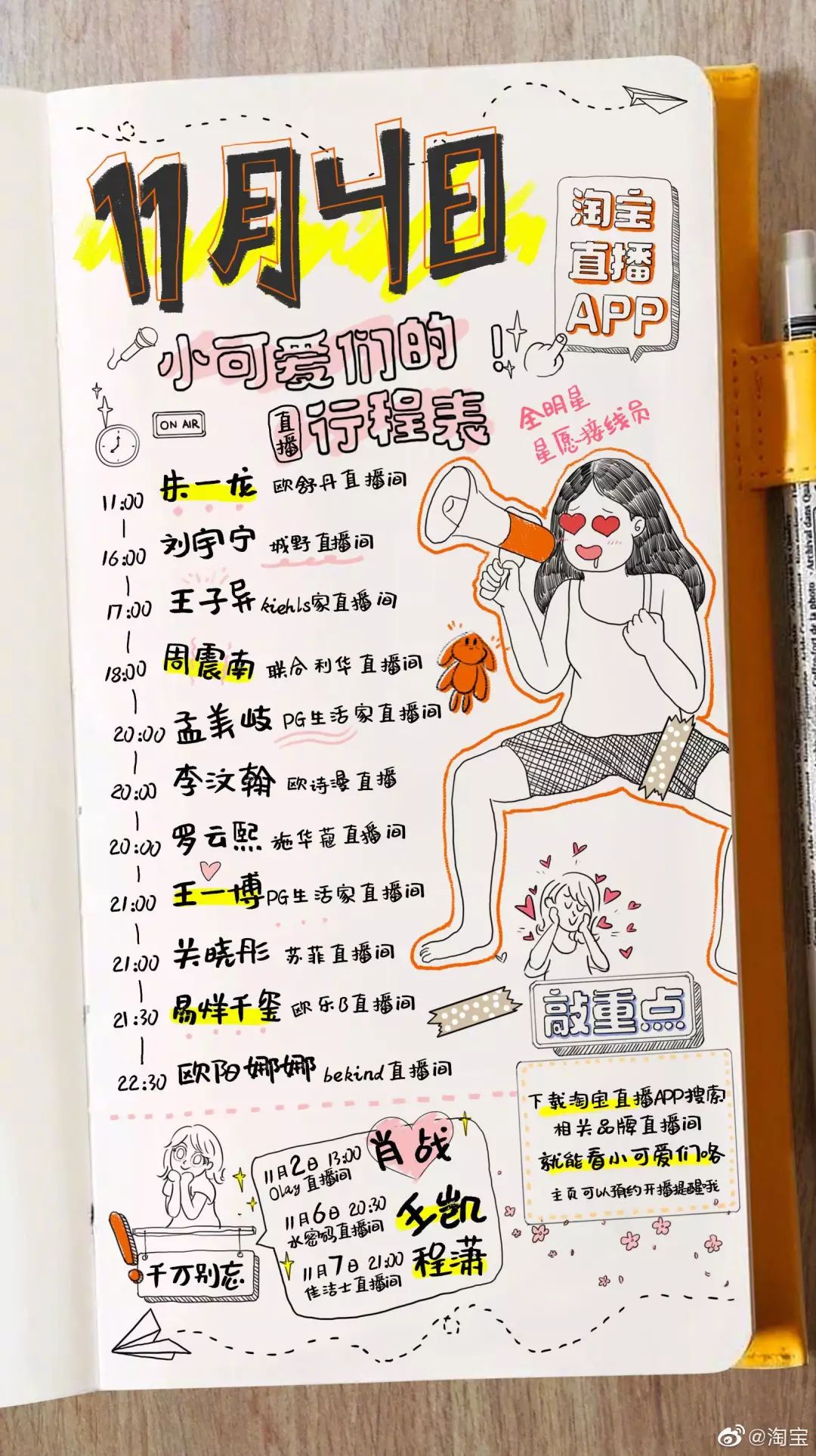 In addition to the platform, many brands announced in October that many artists have become their spokespersons, ambassadors, and star promoters.

FUNJI(ID:FUNJIdata) Organized the new endorsements and title changes of the 400 artists on the Star Power List since October. Found that 98 artists have received new endorsements or new titles in the past month: 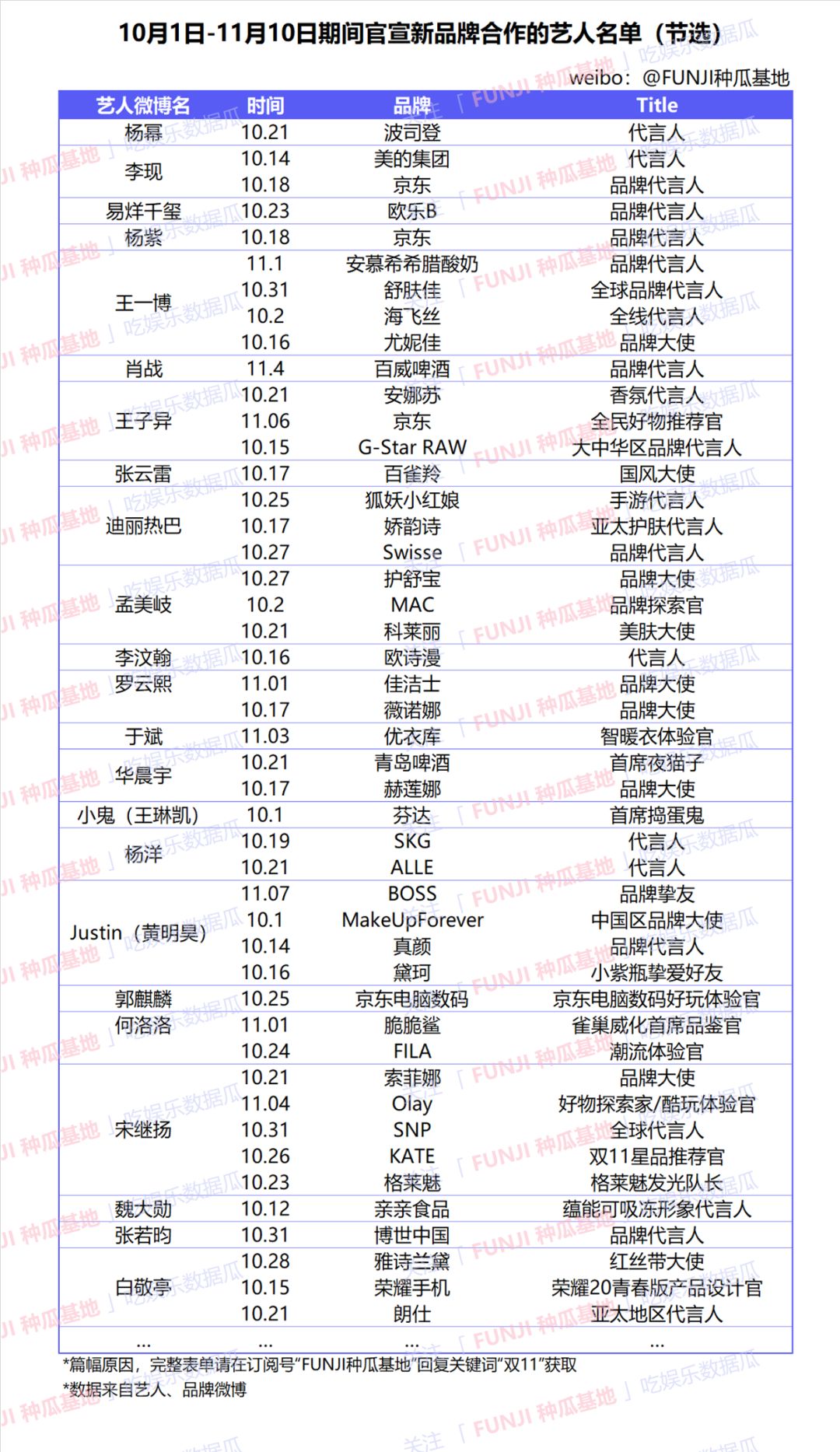 For the sake of space, please complete the form at the subscription number “FUNJI Seeds Base” and reply to the keyword “Double 11”

From the table, These artists are mostly high-profile jasmine artists who are more popular recently., Many of these people are new generation idols who have been in the draft for the past two years.

It has been observed that in order to fully stimulate the consumption of fans, many merchants have brought relevant product links in the “Guanxuan” partnership. Even without the link, these artists will soon appear on the home page and product details page of the merchant Taobao store. In order to make fans buy comfortably, many brands will also create separate product links for fans, from this chainAll transactions that take place in the pick-up are considered to be the ability to bring in the love of beans.

In addition, the merchants will also give fans a limited star around the world, the exclusive limited global coverage, buy products to get, in order to promote fans’ desire to buy.

This year, the star spontaneously broadcasted and brought goods frequently. In addition, Li Xiang was in the live broadcast of the goods, “on the head” and ranked in the top 3 of the Taobao live broadcast “professional star cargo anchor” for others to try and error. Star selection and e-commerce cooperation is a win-win situation, why not?

In addition, it is still unclear whether the brand is suitable for the artist to “lift the coffee”.

FUNJI(ID:FUNJIdata) It seems that whether the star is a brand spokesperson or an ambassador or a friend, the original main role is to enhance the brand, that is, through the image and popularity of the artist and the brand. Expand the influence and trust of brands or products.

Now, Beginning with more brands will bring the ability to bring goods as an important consideration when choosing an artist’s endorsement and cooperation. This invisibly changes the dimension of evaluating the commercial value of artists, and puts the purchasing power of fans on the more High position. In this context, the girls in the rice circle have to work hard to spend money.

We have learned that many brands have begun to understand the fan mentality. Some brands put their fans into the growth idea when they launch new products – “lifting the coffee” to the co-workers, bundling the artists and new products, and then letting the fans actively buy and comment. After all this is done, the brand can use these rushed purchases as a good performance for their new products and use them for further promotion. In this way, the fan economy has almost achieved the “secondary rocket” of some new product growth.

Double Eleven is more than just the carnival of consumers and brands, and more and more variables are entering this artificial festival. Brand sales are no longer completely affected by the quality and price of the goods. With the short-term high sales volume brought by promotion and star benefits, the brand is willing to see such promotion methods, and is more willing to let more stars get the title of their own brands.

However,With the deeper integration of the promotion and fan economy, there may be drawbacks. We learned from the paradox of today’s social platform that there have been cases where the sales of suspected fans have been returned after the sales of the double-elegant single-chain have been reached.

In addition, some merchants are trying to “send the coffee” to the artist in order to rush sales, and the title is losing gold.Implicitly change the order of the artist in the embodiment of business value.