Be the pioneer, not the victim

This is a true “driverless”

“moving beyond the car”.

Cruise, a self-driving company owned by General Motors, is physically making a footnote to the riddle of the parent company a few days ago.

On the evening of January 21st local time, Cruise released the first self-driving car called “Origin” in San Francisco. Without pedals, without a steering wheel, traditional controls do not exist, and of course there is no driver. This is a true “driverless” car.

It is reported that in addition to accommodating up to 6 people in the car, the space is larger; airbags, a “Start Ride” button, an SOS button and a top camera are also deployed. Cruise claims that Origin’s capabilities are not limited to human capabilities. The multilayer sensor suite can see a wider wavelength spectrum, AI can process decisions faster than the human brain, and can provide services at night and in severe weather conditions. 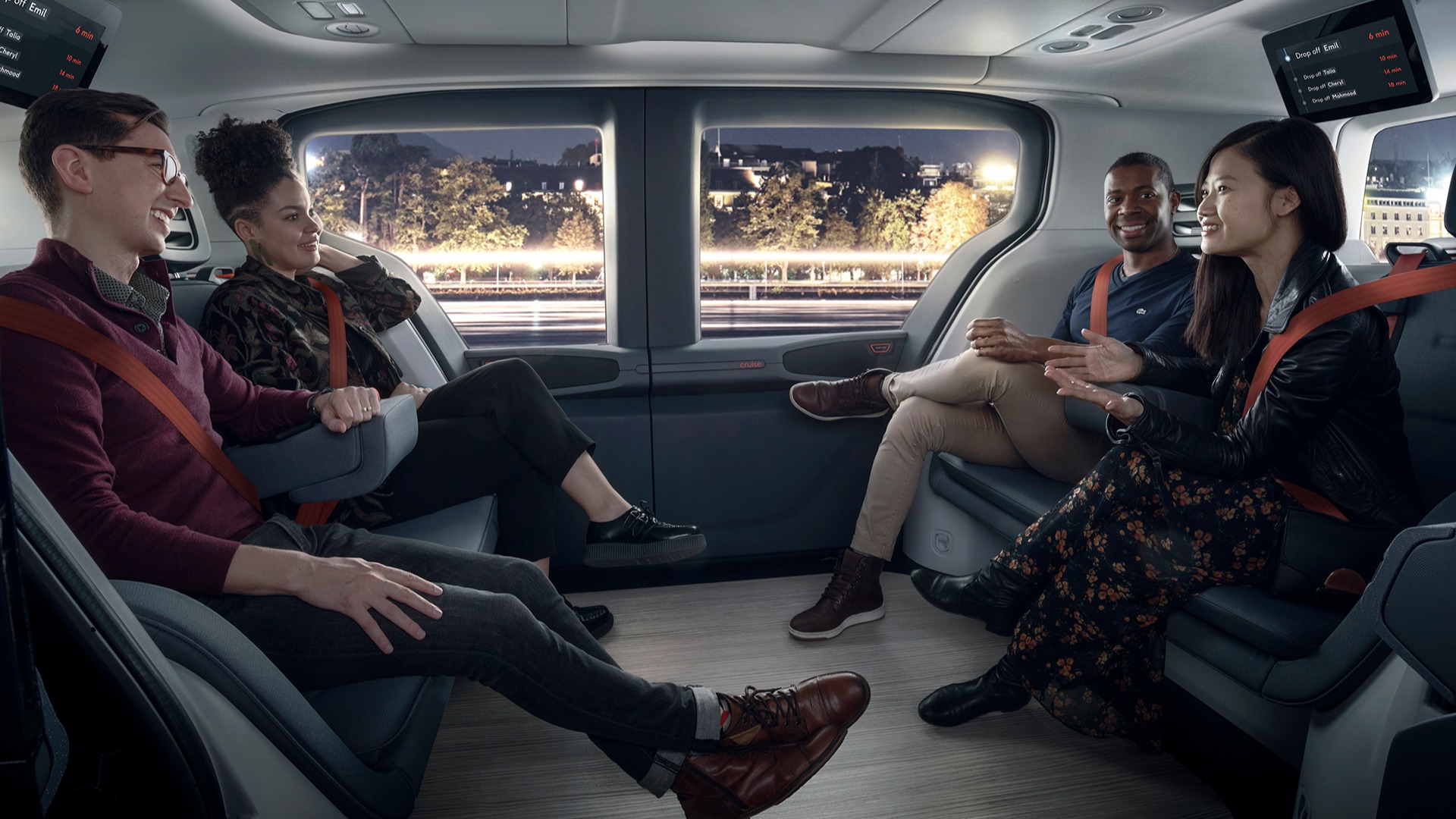 6 people in the car

Cruise is a science and technology company dedicated to providing self-driving car technology and solutions. After being included by General Motors in 2016, it has become its primary chip in the field of autonomous driving. In 2017, Cruise began testing third-generation driverless vehicles on its roads in San Francisco’s main city, and at the same time tested its self-driving ride-hailing service Cruise Anywhere in-house. At the end of the year, GM announced that it plans to put commercial vehicles into operation in 2019.

Being late is not technology.

In January 2018, photos of the fourth-generation Cruise AV self-driving car were revealed. Subsequently, GM began to work with the United StatesA long game for federal security regulators. “Safety issues will determine when autonomous vehicles can be released.” Technology is now pushing regulators to allow them to deploy autonomous vehicles without a steering wheel.

It is reported that the existing 75 automotive safety standards often assume the premise that a licensed driver controls the car, and these have been disconnected from the current development of autonomous driving technology. Previously, Cruise had been testing autonomous driving with safe drivers. Now, despite the disappearance of the steering wheel and pedals, the vehicle is still equipped with a backup system to ensure safety. In the event of a problem with the autonomous driving system, the speed of the vehicle will decrease and it will slowly stop at the curb.

Cruise is widely regarded as the “second industry player” in the driverless space. Its Google rival Waymo has launched commercial unmanned taxi services in Arizona, while another autonomous driving “radical” Musk It means that Tesla will also launch self-driving taxi services in 2020. According to the general plan, after the L4 level autonomous driving technology is implemented, the next step is bound to be chess and shared travel. Cruise CEO Dan Ammann’s words revealed the next key trend, “self-driving, electric, and sharing are the three keywords of this car. At the same time, this is a production car.”

The next step is bound to share chess travel

Capital is swarming. Earlier, Cruise had set a global gold record in the field of autonomous driving, and in the single year of 2018-2019, it has received more than $ 7 billion in investment from Softbank, Honda, and the parent company. Honda, eager to increase the field of autonomous driving, not only provided technical assistance in improving the cleanliness and space utilization of the car this time, it had previously stated that it would continue to inject USD 2.75 billion into Cruise in the future, and some of the transactions were completed in the form of share acquisitions.

Is GM and Honda so anxious, just for profit?

Holding a team on a no-man’s track is also an anti-risk attitude.

In addition to business strategy, for GM, Cruise also represents the future of its brand. After suffering the pain of bankruptcy due to the disconnection of products and markets in 2009, in 2017, with the global layoffs of 15%, the closure of 7 major production bases, and the sale of the entire Opel and GM European businesses, GM took nearly gambling New technology transformation-as for the market aheadWhether the reforms on the market are sustainable, CEO Dan Ammann said: “R & D and large-scale deployment of autonomous vehicles are currently engineering challenges facing the industry. Having sufficient resources to support is the key competitive advantage to continue to promote autonomous driving.”

How far is the large-scale commercialization of autonomous driving? Players on the field are more anxious than spectators. In 2019, Nuro and Uber ATG departments, which focus on unmanned logistics, have been rebranded by SoftBank, and SoftBank has invested in more than 100 autonomous driving companies. There are also traditional car companies FCA and Jaguar Land Rover and Waymo. The R & D expenses of auto companies that used to be 10% or less of their profits are under the siege of the Internet model, and they have become a “bottom hole” for auto companies competing to burn $ 1 billion annually. The 2018 financial report shows that Cruise has lost $ 1.5 billion in three years, and the unrealizable business model is always difficult to sustain. For GM, it is not enough to stop at “moving beyond the car”. To survive in the winter, perhaps “Back to the car” is even more needed.