Under the epidemic, Alibaba seems a bit difficult?

On February 13, Beijing time, Alibaba released unaudited financial statements for the third fiscal quarter of fiscal year 2020 as of December 31, 2019. Last year, Ali’s stock price performance was still very eye-catching. At the beginning of 2019, Alibaba’s stock price on the New York Stock Exchange was about 136 US dollars, and by the end of the year, the stock price rushed to 219 US dollars, which rose about 61% throughout the year to lead many Chinese stocks.

According to the financial report, Alibaba’s revenue in the quarter was 161.4 billion yuan, an increase of 38% year-on-year, exceeding market expectations of 159.209 billion yuan; net profit reached 50.132 billion yuan, an increase of 62% year-on-year. Although both revenue and net profit growth exceeded market expectations, after the release of the financial report, Ali fell nearly 2% at the opening. As of the close, Ali fell 1.6%.

Although revenue and net profit growth exceeded market expectations, due to the impact of the financial report, as of the publication of this article, Alibaba’s stock price fell 1.76%, the stock price was $ 220.36, and the market value was $ 589.99 billion. The reason for the decline may be due to the expected impact of the epidemic on Alibaba. 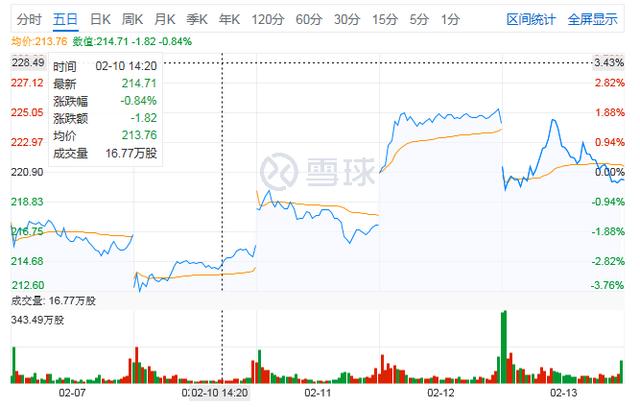 From the financial report data, the term “steady” can still be used to describe the performance this quarter, of course, mainly due to the core business of Ali still shows very stable growth.

On the back of this dazzling financial report, investors are worried about Ali’s financial performance next quarter. Under the influence of the epidemic, Ali’s e-commerce business will inevitably “shrink” in revenue. And what other business performance has been recognized by the market during the crisis? The U.S. Equity Research Agency explained the performance of Ali’s several core businesses during the quarter.

In this quarter, the revenue of e-commerce retail business was RMB 110.458 billion (approximately 15.866 billion US dollars), an increase of 36% over the same period of the previous fiscal year of RMB 81.055 billion, accounting for total revenue The proportion is 88%. Compared with the growth rates of the previous quarters, the growth rate of e-commerce business is at a record low. In terms of segmentation, the two traditional pillar businesses of Alibaba’s e-commerce business are growing more slowly. The growth rate of merchant service revenue and commission revenue is 23% and 16%, which is far lower than the total revenue growth. speed. The other revenue segments from the new retail business have instead shown a strong growth momentum, achieving 128% growth.

Due to the bright new retail business data mainly composed of Hema, Tmall Supermarket, import business and Intime, the Cainiao network and the local life business mainly based on Hungry have performed stably. Among them, the growth of Hema Fresh is a major highlight. As of December 31, 2019, we had 197 independently operated Hema Fresh stores in China, mainly located in first- and second-tier cities.

Alibaba’s e-commerce business is closely related to the size of users. In the quarter, new users not only came from first-tier and second-tier cities, but also from lower-tier cities. In this quarter, Ali’s performance in adding new users was still remarkable. The monthly activity of Taobao Tmall’s mobile terminal was 824 million, with a year-on-year growth rate and a month-on-month growth rate of 17.88% and 4.97%, both of which were higher than the previous quarter. This shows that the sinking dividend has not disappeared, and Ali’s active users are still accelerating.

Although Ali’s e-commerce business has performed well in this quarter, the outside world is more concerned about the performance of its core business in the next quarter. Under the influence of the epidemic, Ali launched all its resources to fight the epidemic with the platform.

On February 10, Alibaba released the “Report to Merchants”, which proposed 20 measures in six major areas to help merchants, including “avoiding the annual platform service fee for all Tmall merchants in the first half of 2020”, “Ant The e-commerce bank under the Gold Service Group provided RMB 10 billion interest-free loans to Hubei merchants on Taobao Tmall.

Under the impact of the epidemic, this risk will have a significant impact on Alibaba’s e-commerce business. According to the Dolphin Think Tank, Ali may lose 8.96 billion ads and commissions in February. Taking into account that if there is no epidemic, it will increase by 15% year-on-year, and the actual loss in February was more than 11.2 billion yuan.

FromJudging from the growth rate of e-commerce business, the growth is still relatively stable, which also shows that Ali still has great market competitiveness in this core business. However, we also see that under the influence of the epidemic, the impact on Ali’s e-commerce business is not small, and the revenue in the next quarter will definitely fall a lot year on year.

In the quarter, revenue from cloud computing business increased by 62% year-on-year to RMB 10.721 billion (approximately $ 1.54 billion). This is also the first time that Alibaba Cloud has exceeded 10 billion revenue. Alibaba Cloud’s adjusted earnings before tax, interest, depreciation and amortization (EBITDA) for the fiscal quarter was a loss of 356 million, which has narrowed compared to the previous two-year loss of 521 million in the previous quarter. 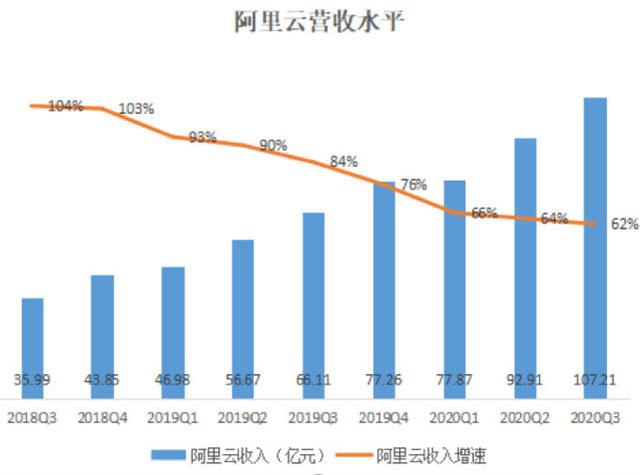 Represented by Amazon and Microsoft, both of them rely on cloud business to achieve a market value of over one trillion US dollars. Similarly, in the judgment of Ali’s market value, the growth of Alibaba Cloud is very important. Previously, in the Morgan Stanley’s 2018 valuation model, using an annual compound growth rate of 25%, AWS’s valuation will be about $ 270 billion, which is about 33% of Amazon’s total market value. At the same time, Morgan also predicts that Alibaba Cloud sales will reach 28.5 billion US dollars by 2024. Using the same PS value, the valuation is at$ 200 billion.

The reason for such a high valuation is that we see Aliyun’s development potential. On February 11, IDC released the “Tracking of China’s Public Cloud Service Market (2019Q3)” report. The report shows that the size of China’s public cloud IaaS market in Q3 2019 reached 14.46 billion yuan, a year-on-year increase of 62.2%. Alibaba Cloud, Tencent Cloud, and Kingsoft Cloud, as the top three Internet cloud service providers, together with China Telecom, Huawei Cloud, and AWS lead the rapid development of the Chinese cloud computing market.

Alibaba Cloud’s main market is currently concentrated in the Asia-Pacific region. Although it has a lot of market share, its revenue scale is still far from Amazon and Microsoft. This also requires it to occupy more markets and improve Overall business value. But it cannot be ignored that domestic cloud computing vendors are also accelerating, and competition with Tencent’s cloud business is intensifying.

In this epidemic, Alibaba Cloud has shown strong competitiveness, especially its impressive performance. Since the Spring Festival, strong demand for home office and home classes has made Ding Diao dominate the Apple App Store for 7 consecutive days. To prevent the epidemic, 200,000 office workers with more than 10 million companies and organizations on Alibaba nailed it online. In order to support this unprecedented office demand, DingDing urgently expanded 10,000 cloud servers on Alibaba Cloud to ensure DingDing video conferencing, group live streaming, office collaboration and other functions to ensure a smooth user experience.

Large entertainment business growth slows down and intensifies losses. It is not difficult to bring high growth in the short term

Among Ali’s businesses, the large entertainment business is still in the stage of spending money on development. In the third fiscal quarter, revenue from digital media and entertainment business was RMB 7.396 billion (approximately $ 1.062 billion), an increase of 14% from RMB 6.491 billion in the same period last year.

Dawen Entertainment is mainly represented by Ali Pictures, Taobao Tickets, Youku, etc. These business segments are the perfect layout of Ali’s entertainment ecology, but whether it is investing in film production or other projects, there are no small risks. In terms of losses, Alibaba Entertainment’s adjusted profit before tax, interest, depreciation and amortization (EBITDA) for the quarter was a loss of 3.298 billion yuan, a substantial increase in the amount of loss compared to 2.207 billion yuan in the previous quarter.

The main reason for the increase in losses is that Youku did not launch some popular works in the fourth quarter to attract a wave of paid user growth. Without the help of the big drama, the growth of advertising and paid business is difficult. The cancellation of the Spring Festival stalls in this epidemic was not a small loss for Ali Pictures and Taobao. At the same time, the development of the domestic film and television industry was greatly affected last year, and the number of projects started has shrunk a lot, which is also obvious to Alibaba Entertainment, which brings revenue to the project.

For Ali, the development of large entertainment business faces different difficulties. On the one hand, its revenue growth is not difficult, on the other hand, it has strong competitors at the competitive level. Under the influence of these factors, it is estimated that Ali will have to invest more. Less money to develop them. Although still at a loss, this is also a potential opportunity to increase Ali’s market value growth in the long run, and how to achieve greater breakthroughs in the future is critical.

In recent years, Ali’s overseas operations have continued to expand overseas markets through overseas investment and mergers and acquisitions. Aliexpress, its own B2C platform, is an important tool for Alibaba’s overseas expansion. In addition, Ali has also collected income from a number of overseas e-commerce platforms, and has continuously spread its nets around the world in an attempt to increase its influence in overseas markets, and strive to compete with Amazon.

For Ali, although the volume of development in the domestic market is getting bigger and bigger, after all, the growth space is not as broad as the overseas market, which is one of the reasons why Ali’s frequent overseas actions. In the view of the US Stock Research Institute, Ali’s overseas actions will definitely continue to increase in the future, and to gain influence in the overseas market through behind-the-scenes control, which is also an important layout to enhance its valuation value.

From Ali’s financial report, it is still a very stable financial report. Of course, this is mainlyStill benefited from the steady growth of core business e-commerce. This is also the key reason why it can obtain the ratings that many analysts buy. According to Refinitiv, Alibaba is the most popular company in Asia. Of the 48 analysts tracking Alibaba’s New York-listed stock, 47 gave the stock a “buy” or “strong buy” rating.

According to the report of Tencent Technology, in response to analysts’ report on the impact of the outbreak on the financial performance of this quarter, during the earnings call, Alibaba CFO Wu Wei said that we expect the March quarter ’s revenue growth to be negatively affected. That is to say, the growth rate will slow down, and it does not rule out that it is a relatively large slowdown.

For Ali, due to the impact of the epidemic, the financial performance of the next quarter will obviously face a decline in the year-on-year growth rate. However, from the optimistic point of view, the epidemic was only a matter of time in the past, and Ali’s dilemma was only short-term. As the situation improves, the operation of Ali’s business will also be normal. strength.