The global content consumption scale reached the scale of 100 billion US dollars for the first time.

Recently, the American Film Institute has published the “2019 Thematic Report” (hereinafter referred to as the “Report”).

The Report shows that the global box office of movies in 2019 was 42.2 billion US dollars, an increase of 1% compared with 2018. And the global home entertainment market (including streaming media, TV, DVD) market size reached 58.8 billion US dollars, an increase of 14% over 2018. The sum of these two numbers means that the consumption scale of the global content market has reached the order of hundreds of billions of dollars. 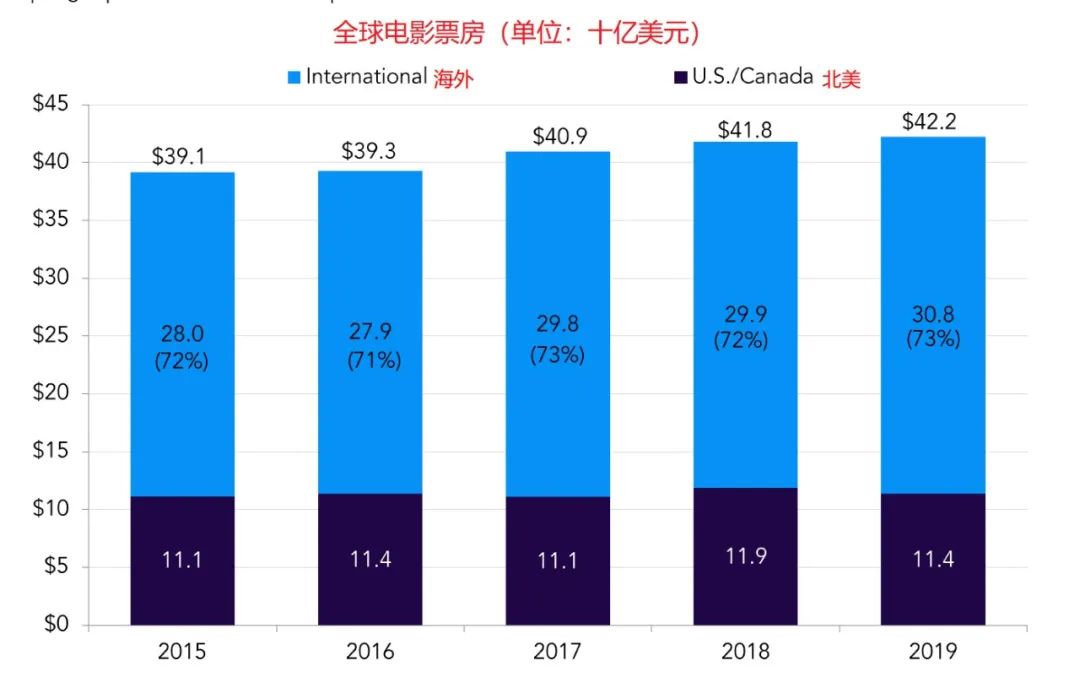 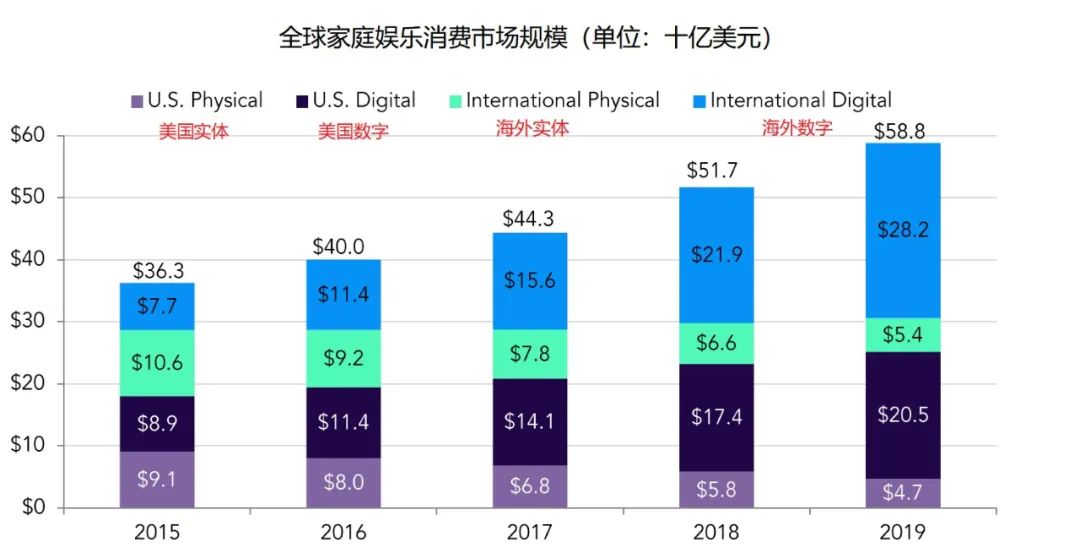 The main driver of home entertainment growth is digital content consumption such as streaming media. The global digital film and television content market size reached 48.7 billion US dollars (this figure does not include pay TV), an increase of 25% over 2018. The North American market grew by 18%, and the overseas market increased by 29%.

Implemented to a more specific streaming media market, with a size of $ 44.8 billion, which is much higher than that of movies.

The growth rate of the theater market is slowing down, and even developed markets like the United States have experienced a substantial decline in fact. According to the Report, the total box office of US movies in 2019 was 11.4 billion US dollars, down 4% from the previous year, and 1.24 billion movie tickets were sold, down 5%.

Although the United States is still the world ’s largest film market, if we pull the long axis, we will find that the box office of the United States seems to have touched the ceiling, and it is difficult to make any major changes.

So, we see that in the past year, the global film and television content industry has turned to streaming media. Hollywood’s traditional film and television giants have established streaming departments. Disney’s Disney + has already fired its first shot at the end of 2019. Warner’s HBO Max and NBC Universal’s Peacock will be officially launched shortly.

At the same time, American streaming media companies represented by Netflix have begun to increase investment in overseas markets against the background of increasingly fierce domestic competition. In the 2019 financial report released by Netflix, overseas users have reached 106 million, accounting for 63% of all users. The reason for the huge increase in digital content consumption in overseas markets is here.

Streaming media not only revolutionized the theater, but also brought structural changes to Hollywood. According to the Hollywood Reporter’s six major Hollywood film and television content income statistics, such as Universal and Paramount’s century-old Hollywood stores, box office revenue has been far lower than the content licensing income. The former’s theater revenue was only $ 1.5 billion, while content licensing revenue was more than $ 3 billion; the latter’s theater revenue was only $ 547 million, but home entertainment (including streaming media, DVD, etc.) revenue was $ 623 million. 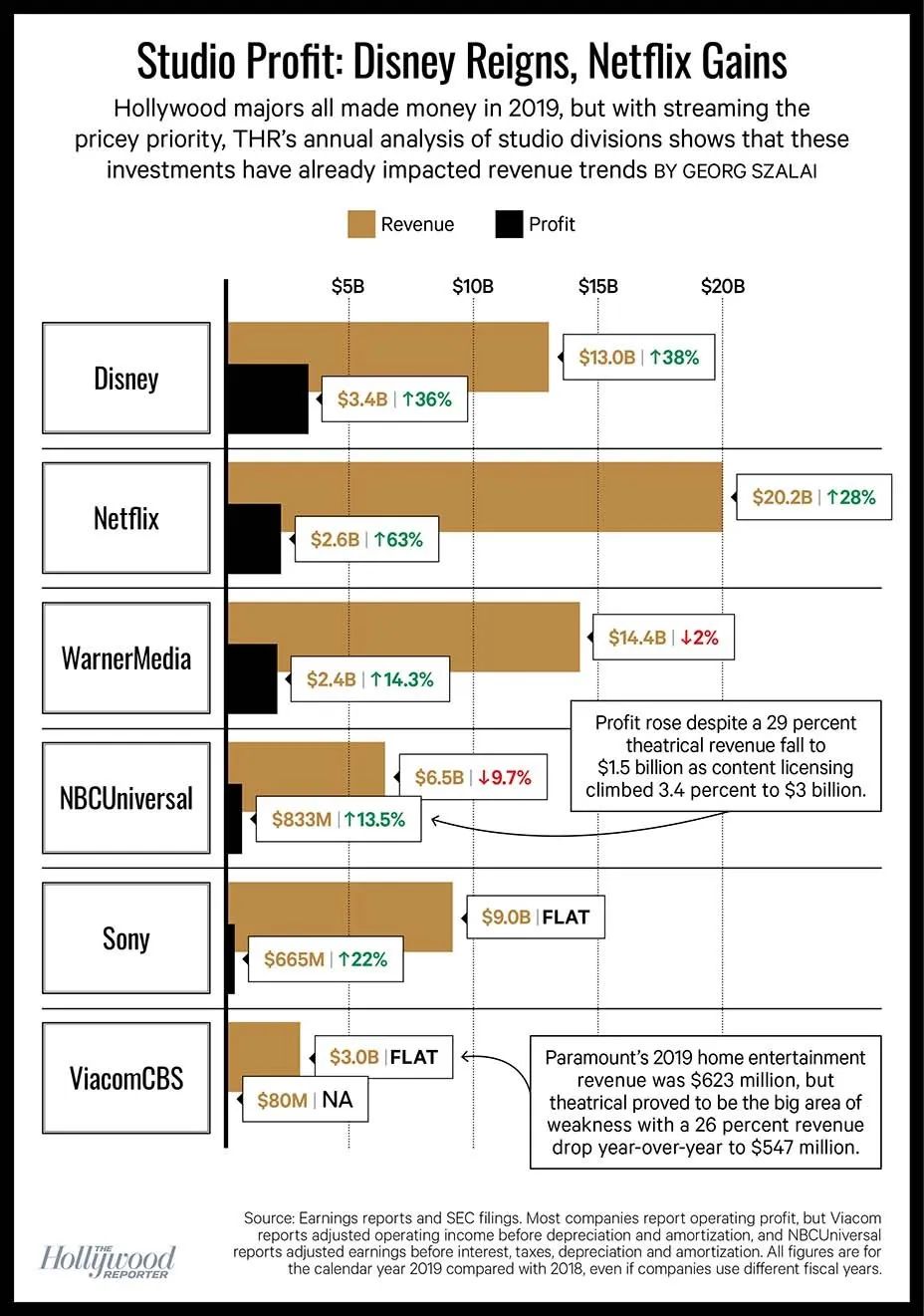 On the other hand, Netflix, a “barbarian at the door,” has successfully entered the room and entered the American Film Institute. Even Hollywood veterans don’t admit that Netflix makes movies.

Simply from a digital perspective, the number of subscribers to streaming media is far greater than traditional TV platforms such as cable TV and satellite TV. In 2019, the number of global cable TV subscribers was 530 million, a decrease of 2% year-on-year; in the United States, there were 50 million cable TV users, which also showed a slight decline.

But so far, the market size created by streaming media is far less than that of limited TV and satellite TV.

The Report shows that although the number of subscribers has declined in 2019, the global cable TV market has reached US $ 116 billion, an increase of US $ 2.2 billion compared with the previous year. It experienced a significant increase of 31% in the year, but still only $ 44.8 billion, less than half of cable TV.

The same is true in the United States. In 2019, the size of the US cable TV market reached $ 53.7 billion, an increase of 1% over the previous year, while the streaming media market size was only $ 19.3 billion, a growth rate of 24%. Although the growth rate is fast, the current streaming media still seems to be in a big but not strong state.

The huge gap between the number of subscriptions and actual revenue is simply the price.

Netflix, the global leader in streamingThere are three monthly subscription fees in the US: $ 9.99, $ 13.99, and $ 17.99. This price is relatively expensive compared to other streaming media platforms, and the average monthly fee for a limited TV package (packing multiple paid channels at one time) is about $ 90. Even if a user subscribes to multiple streaming media at the same time, the psychological limit for most users is around $ 20.

The root of the price difference is that the positioning of streaming media and traditional TV is very different. Users subscribe to streaming media mainly to consume film and television content, that is, various movies and TV series. But by comparison, the content provided by cable TV is even richer. In addition to TV series, movies, there are variety shows, sports programs, and news programs.

However, looking at this $ 44.8 billion alone, it is not a small number. Its high growth means that this is a market worth exploring.

In addition, combined with Netflix’s full-year revenue of $ 20.16 billion in 2019, we can roughly infer that Netflix currently eats 45% of the streaming media market alone.

At present, large and small film and television companies and television networks in the United States are transitioning to streaming media, including Warner, which owns HBO, must launch the streaming media platform HBO Max to respond to market changes. Currently, there are more than 140 platforms that provide streaming services to American audiences. Combined with historical data, the number of cable TV users has entered a downward trajectory, and it is only a matter of time before cable TV is replaced.

As traditional movie giants shift to streaming, another change in the market is making more and more homemade content.

In 2019, the number of original streaming programs reached 385, an increase of 18% over the previous year, and a five-fold increase compared to 2015. The programs here not only refer to film and television programs, but also variety shows and children’s programs. 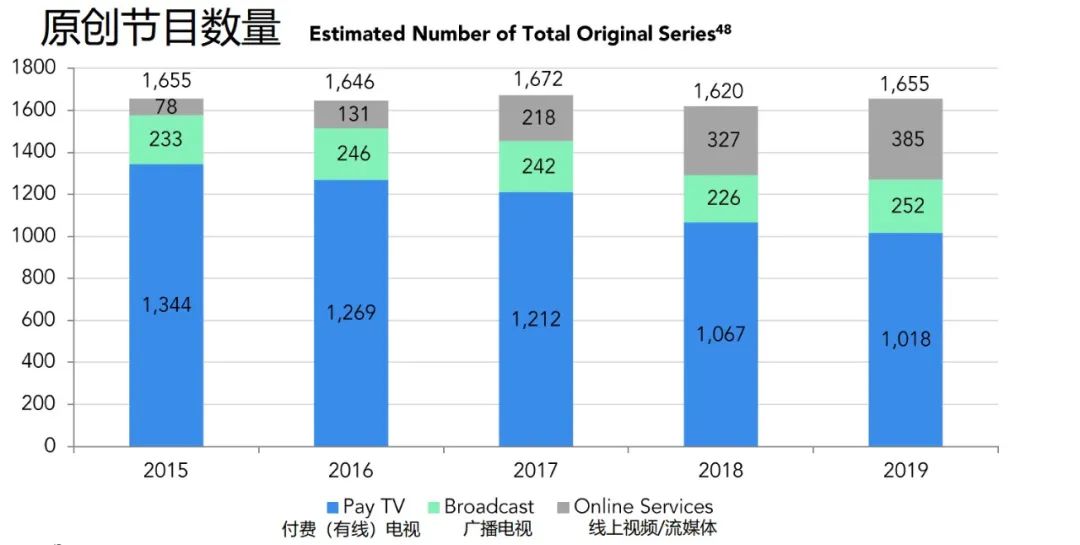 While the rapid growth of original streaming programs, we have seen that the number of original programs on cable TV has been greatly reduced, from 1,344 originals in 2015 to 1,018, and 326 programs in five years.

In 2019, the streaming content war is unprecedented. Because traditional media giants turnAfter streaming to the media, they have “discontinued supply” to the streaming media platform-the original contract will not be renewed after the expiry of the contract. This threat forces streaming platforms to accelerate the production of original content.

Another reason for the rise of streaming original programs and the decline in the number of original programs on cable stations is the transfer of production resources by traditional media giants. In simple terms, the people who originally produced programs for cable TV were transferred to the streaming department. 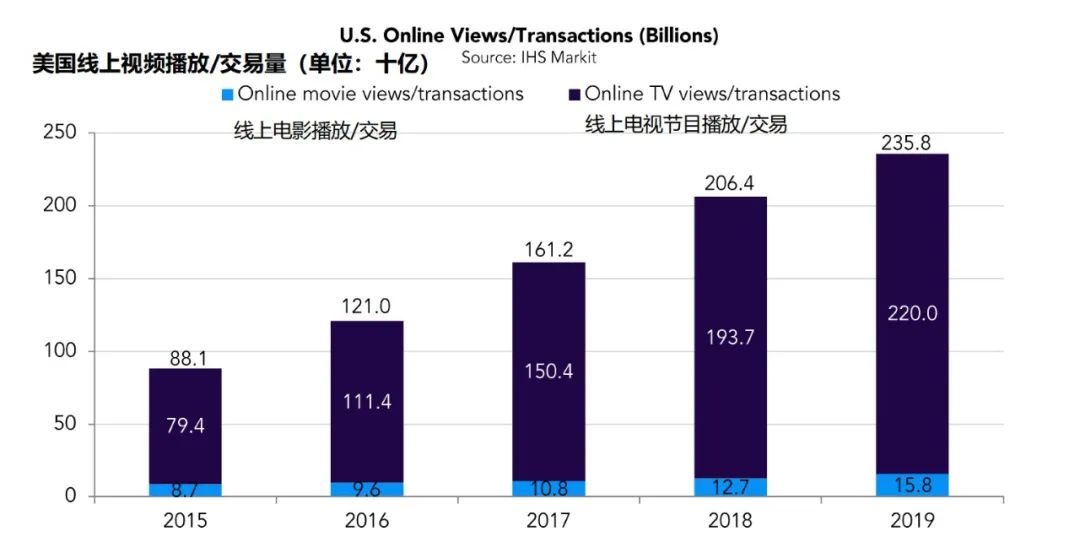 The reason why streaming media has gained momentum has a lot to do with American media usage habits.

Americans now use their smartphones for 3 hours and 43 minutes a day, while they spend 3 hours and 34 minutes on their televisions. This is the first time that a smartphone has surpassed a TV. Another concern is “other connected devices”, which achieved a 20% increase in 2019. This category includes connected set-top boxes such as Apple TV and Roku.

Another point of concern is children’s media usage habits. “Report” statistics show that children under the age of 11 use mobile devices more often.

Although mobile phones are not suitable for watching TV shows and movies, this small screen is obviously our most important entertainment device.